The Mt Tongariro eruption on August 1 badly damaged Ketetahi Hut and DOC says it does not know when it might be reopened.

DOC closed the Tongariro Alpine Crossing (TAC), Ketetahi, Mangatepopo and Waihohonu huts immediately after the eruption. Two days later Waihohonu Hut was reopened, but as Wilderness went to press, the other two huts and the TAC remained closed.

DOC’s Ruapehu Area Manager Nic Peet said it is too early to determine when trampers will be allowed back on the popular Tongariro Alpine Crossing Track.

“We need to be satisfied the volcanic threat has eased before this track re-opens and we will take advice from the GNS experts on this,” he said in a media statement. “We are keen to get people back onto the Tongariro Alpine Crossing but we need to make sure the volcano has settled down first.”

Three men who were staying at Mangatepopo Hut on the night of the eruption were found safe and well by search and rescue on Tuesday morning.

Thames-Coromandel District Council has allocated $40,000 of its 2012 budget to conduct a feasibility study on building the country’s 10th Great Walk on the Coromandel Peninsula.

Mayor Glenn Leach told Wilderness the idea of a Great Walk on the Peninsula has been kicking around for decades, but has never taken off.

“Community groups have been working hard on building tracks around the Peninsula and have vision for more in their areas,” Leach said. “They’re enthusiastic people and we don’t want to undermine them in any way, we want to work with them.

“This project is about creating a world-class multi-day walk that links strongly with towns and communities on the Coromandel to drive economic development through tourism.

“Imagine building a walking track from the top of the Peninsula down to Waihi across to Karangahake Gorge, taking coastal routes and along the spine of the ranges linking all our towns on the east and west coasts.

“Much of the track already exists; it’s about joining them all up.”

Leach wants the “central artery” to be a grade 1, two metre wide track with lower grade tracks branching off it.

Rather than building new huts along the track, Leach said local communities will provide accommodation.

“We have 55 per cent absentee home owners on the Peninsula,” he said. “We could utilise these homes.”

To build the track, Leach envisions drawing on volunteers from around Coromandel and engaging school leavers and the unemployed and teaching them new skills along the way.

He said many older retired or semi-retired local residents would get involved with the project bringing important know-how to it.

Leach aims to have the feasibility study completed by September and will then meet with community groups, iwi, business, DOC and others to discuss the project’s strategy and principles.

In March next year Leach wants to be ready to take a detailed proposal to Wellington to request funding and support from the Government.

“I believe this is the sort of initiative that Government can’t walk away from,” Leach said. “The economy has been in decline for quite some time now and we’re stepping up to the plate and saying things might not get better for a long, long time so let’s get in and do something that’s real while we can.

“This could be the 10th Great Walk in New Zealand and one that is north of Taupo where the bulk of the population is.

“Ten years down the road I see this as being the biggest income for the Peninsula.

To celebrate National Poetry Day on July 27, Wilderness asked readers to share their outdoor themed poems. Here’re three of the submissions we received.

They call them silver,

but I see golden ridges

of tussock and rock.

Not the icy cold that cuts

Or kills with silent wrath

Or fog that cloaks the flax

and soaks the skin as I push

through tussock to a haven

And I forget the cold and wet

Up, crunch through beechy forest, breathe,

Step over roots and follow your nose to the sky-line:

Skirting the edge of the world we track the side

Of this feathered slope, sidling up to the saddle.

Pause only to hop, skip over rocky stream.

Hold out hands to help one another.

Through the looking glass and into the sunshine,

those tussocks whir and shimmy below.

Sweet snack and sense of accomplishment

before we begin our descent, homeward leg of our trail.

River cross and squelch before the valley of burnt yellow trees.

You are tired now, you limp a little, but only I know and

With a wrinkly smile you keep up to the others.

The road continues interminably after the rise and fall

Of previous paths. Over the bridge,

And just as footsteps fall heavy and enough is enough,

The twinkle of Arrowtown beckons through the leaves:

pointing us to the pub, a fire and our edible medals of pie and chips.

Cheer and high five that 22-k of a late afternoon.

The only casualties were the corpses of two decimated sheep.

Reading by moonlight tramping to ice

seems the stories around campfires have ended up in books

no longer a communal fire

but now you talk to the characters in the book,

The quest for new and interesting people and places,

no different from the communal fire light,

the red flame, now captured in pages of black and white.

Yesteryears dark places, the flicker of light and sparks

now the spaces between words and paragraphs where the mind finds a place for its self.

No longer in a race to reach skyward and join the stars above,

stands on a bookshelf like a campfire ashes in the morning light.

instead of the blandness of neutrality often said.

We have replaced the unknown with the known,

belief with certainty quoted by some

The daydream has been lost, tossed as yesterdays clothing,

and commitment to the cloth.

Something worn becomes part of you,

as indeed does the landscape

long may the rivers run.

The Department of Conservation said the facilities were removed due to health and safety and economic reasons. According to Craig Harrison, visitor assets manager for the Wairarapa conservancy, it costs $12,000 a year to supply all three huts with gas and regular inspections. “These huts all require the gas to be lifted in by helicopter and both Tutuwai and Mitre Flats are expensive because of the distance,” Harrison said.

Harrison didn’t expect the removal of gas from the huts to affect usage. “The Department has received positive feedback from members of the public regarding gas removal,” he said, adding that “Jumbo and Powell huts will still have gas” if that is an issue for some users.

DOC will continue to supply firewood to the three huts, which will provide heating and also a cooking source via the woodstoves installed. Harrison said these heating and cooking methods are far safer than gas: “There is a possibility of gas being left on or a leak which could lead to carbon monoxide poisoning. Gas is highly explosive and the gas is unvented. The woodstove is a vented and closed unit, [so] a lower risk to hut users.”

The three huts will remain listed as ‘serviced’ huts. 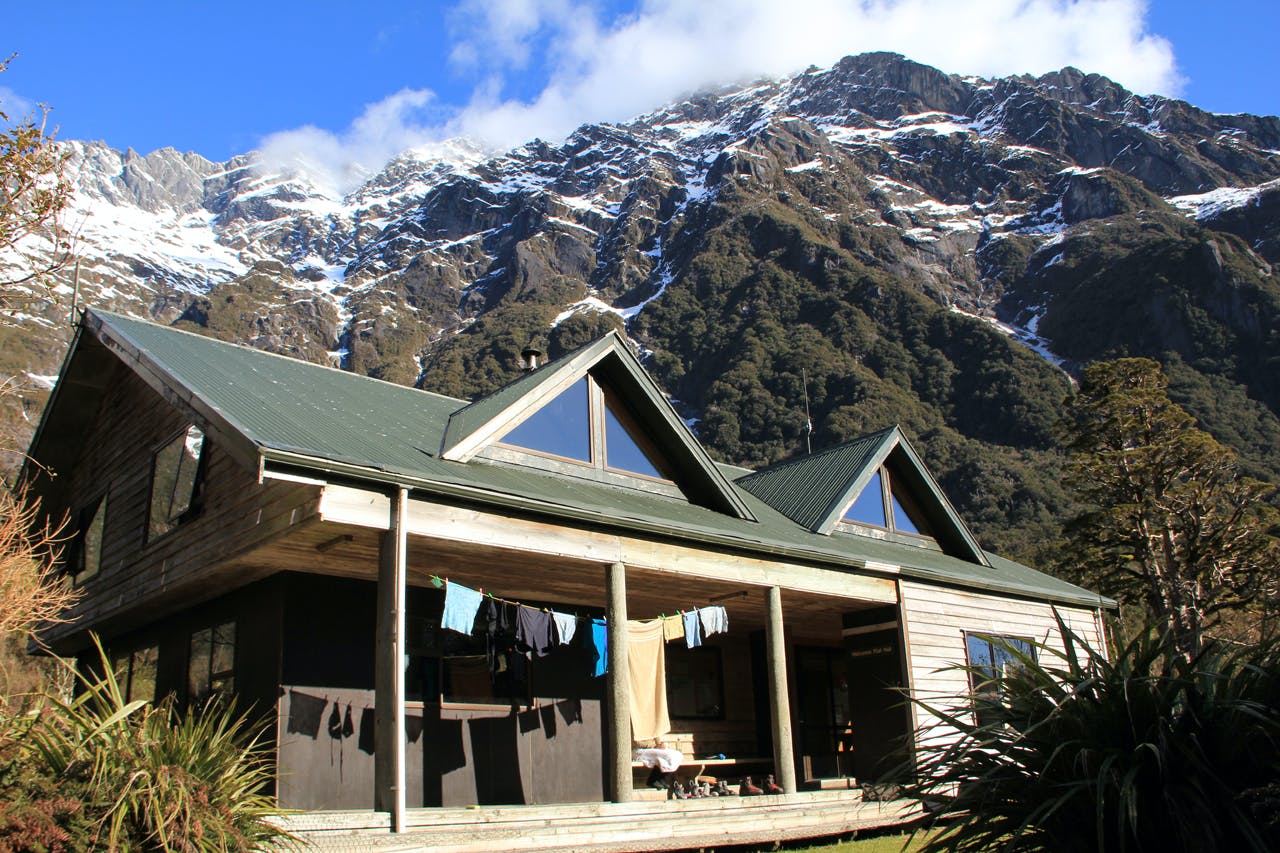 Trampers wanting to stay at Welcome Flat Hut in Westland national Copland Valley will no long have to rush to make sure they get a bunk for the night, or load themselves up with a tent and sleeping mat ‘just in case’. From September 3  those planning to stay at the popular hut will need to book one of the 31 bunks either online or at a DOC office.

Welcome Flat Hut is popular with both Kiwis and overseas visitors, mainly because of its beautiful location, low altitude and easy access. The famous Welcome Flat hot pools also help.

DOC’s Cornelia Vervoorn said summer is the busiest time: “In summer there are frequently more than 60 people vying for a bunk at the hut. The hot pools also encourage winter visitors, so the hut can also be busy in winter, especially during the school holidays.”

Booking is now essential all year round and a penalty fee applies if a tramper arrives without having first booked.

The cost of staying at the hut has not changed – it is still $15 per adult per night ($7.50 for those aged between 5 and 17 years). Backcountry Hut Passes are not valid at the hut.