The prospect of a road toll on the main access route into Mt Aspiring National Park has been raised by the Wanaka Community Board, which has said the cost of maintaining Mt Aspiring Road is a heavy burden on local ratepayers.

Community board chairman Lyal Cocks said he has formally asked the Queenstown Lakes District Council to investigate the feasibility of tolling the unsealed public road.

Maintaining the road, which becomes badly corrugated, is a big cost for a small rate base, he said. “We would like to do more, but can’t afford it.”

Cocks estimated maintenance costs to be in the high “tens of thousands” of dollars.

Current legislation wouldn’t allow the road to be tolled, but if the feasibility report showed it to be a good option, the council could approach central government to have it designated a special purpose road, he said.

Any toll would apply to the unsealed section of road beyond the entrance to Treble Cone Ski Field.

While the community board recognised the benefit of being the ‘gateway’ into New Zealand’s third largest national park, it had to weigh up those benefits against costs.

A toll would be another way of getting something back from visitors, Mr Cocks says.

A film crew filming in Mt Aspiring for Bear Grylls’ television series Man vs. Wild had paid for “a couple of gradings”, during their time there. 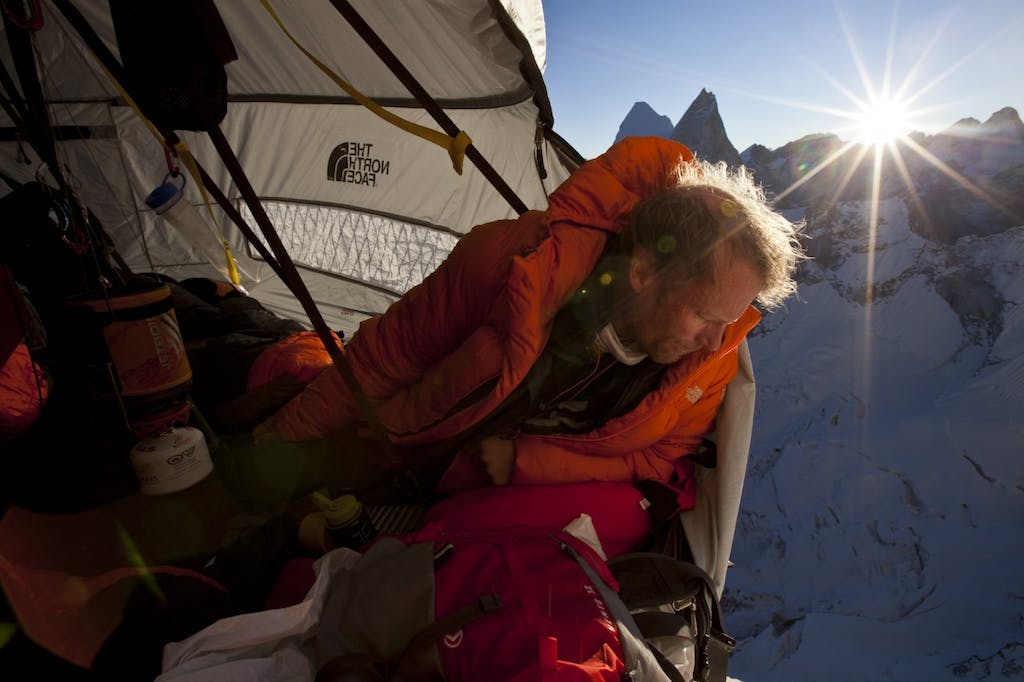 The winning films in the 2013 New Zealand Mountain Film Festival have been announced.

The Grand Prize went to The Shark’s Fin, a 25-minute film chronicling the first ascent of a granite buttress on 6310m Mt Meru in India by Conrad Anker, Jimmy Chin and Renan Ozturk.

The winner of the best New Zealand-made film went to Flow Hunters, a 24 minute film following kayaker Ben Brown on a 35-day adventure through New Zealand. Brown travelled 8000km, kayaked for 24 days and descended 17 rivers during the expedition.

Honnold 3.0 was awarded the Best film on Climbing. The 32-minute film follows Alex Honnold as he prepares to climb the Yosemite Triple – the three highest rock faces in Yosemite National Park – without ropes.

Other films awarded include One Step Beyond, a film about wingsuit flyers; Canada, a film that investigates a proposal to ship oil through the dangerous waters bordering the Great Bear Rainforest; Cascade, a short film about a group of kayakers searching for the perfect waterfall in the Mexican jungle; and Further, a film following snowboarder Jeremy Jones as he explores remote backcountry terrain and snowboards near-vertical mountains.

The final award, ‘People’s Choice’ will be decided during the festival. This year’s Mountain Film Festival runs from July 5 to 9 in Wanaka and July 13 to 14 in Queenstown. Guest speakers include Australian adventurers Cass and Jonesy. The headline speaker is adventurer and photographer Cory Richards.

For more information, including ticket purchases, head to www.mountainfilm.net.nz. 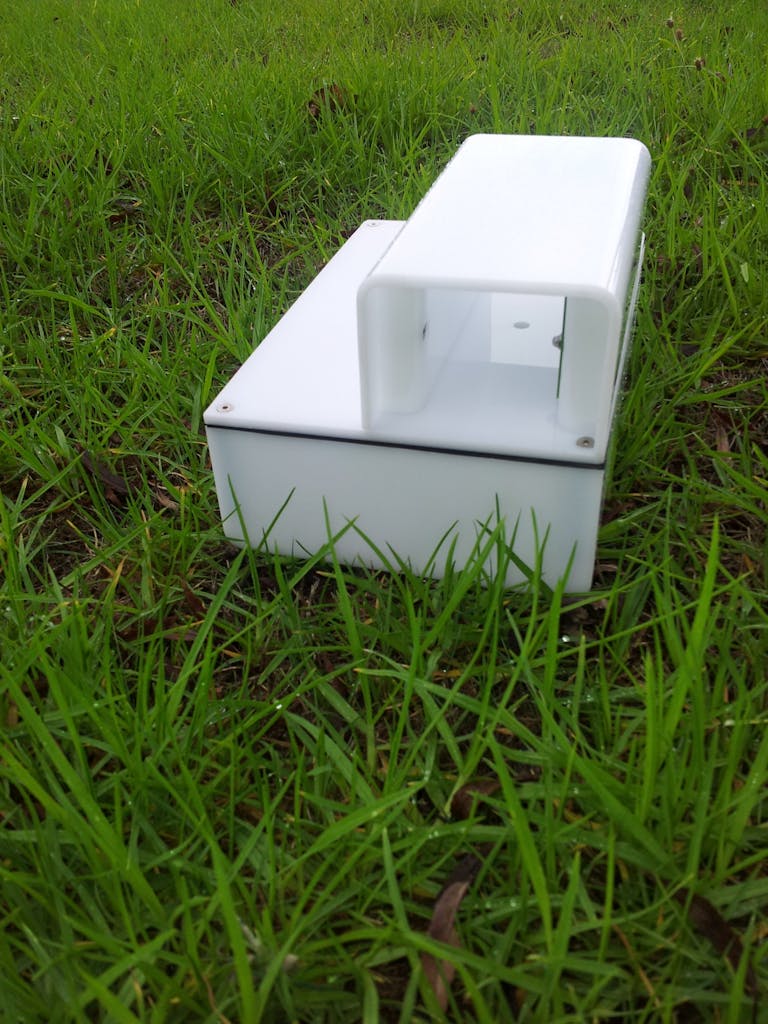 DOC director general Alastair Morrison acknowledged in March the department is failing to stop the decline in ecosystem health and native species.

In an interview with Wilderness, Smith said New Zealand’s wildlife is facing a unique challenge that’s too big for government to deal with alone even if conservation had an infinite budget.

“Our best hope for saving our biodiversity is some of the investments the department is making in technology,” Smith said. “For example, we’ll be putting more investment into automatic resetting traps and new super lures.

“This is our best hope to turn the tide, but with prudent financial spending.

“I can’t guarantee it will be successful, but it’s our best hope.”

In December last year, then conservation minister Kate Wilkinson held a two-day summit with DOC, scientists and technical experts to brainstorm ways to save native species from introduced predators like stoats, possums and rats.

Technological solutions include a new trap called the Stoat Spitfire, designed by scientists at Lincoln University, which can kill 100 stoats before it needs to be replenished.

Super lures that act like a technological Pied Piper – calling pests from far and wide – are also being researched.

Conservation advocate and champion for a pest free New Zealand Nicola Toki said resetting traps, the Spitfire and super lures are great additions to the armoury in the fight against pests, but are not a silver bullet.

“What is required is a national strategic approach to how we are doing pest control across the country,” Toki said. “The key now is to align the work of all our pest control agencies, communities, individuals and businesses into a common, effective goal.

“In my view, the goal we should be aiming for is a predator free New Zealand.

“If all New Zealanders were aware of just how dire it is out there when it comes to introduced predators, I think that as a country we’d begin to rally.” 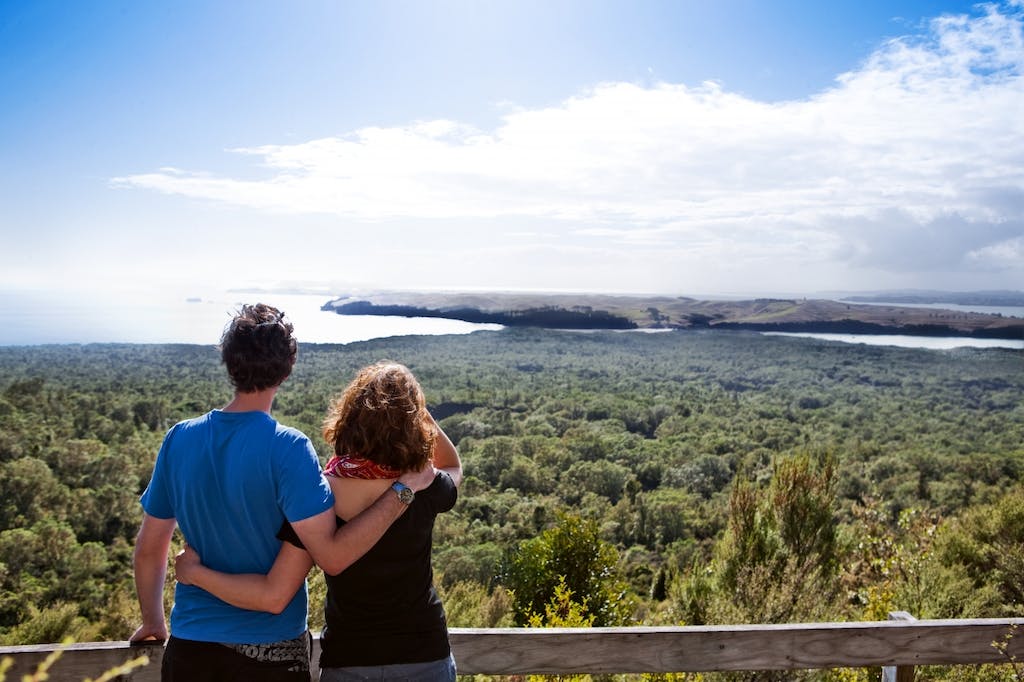 Cap: Auckland Mayor Len Brown a three-day walk on Rangitoto and Motutapu islands will add to the islands’ appeal

By summer next year trampers in Auckland will have a new multiday walk to tick off on Rangitoto and Motutapu Islands in the Hauraki Gulf.

The multiday walk is called the Rangitoto-Motutapu Haerenga (journey through sacred islands) and was announced by Auckland mayor Len Brown.

“Walking to the summit of Rangitoto is already one of Auckland’s most popular daytrips for locals and visitors alike, but Rangitoto and Motutapu have so much more to offer and the Haerenga is a chance to discover the contrasting landscapes and histories of the two islands,” Brown said.

The three-day walk will allow visitors to explore Auckland’s largest and most diverse pest-free island sanctuaries that are home to many rare native species such as takahe, kiwi, saddleback and shore plover.

Motutapu Restoration Trust volunteers have also established a nursery for native trees on Motutapu with more than 400,000 already planted on the island.

The Haerenga is being developed by the Department of Conservation, Auckland Tourism, Events and Economic Development and iwi in partnership with other stakeholders.

The tracks and routes that make up the Haerenga already exist, so anyone could walk the track now. DOC Auckland Conservator Sean Goddard said while DOC has no firm plans for new accommodation options on the islands, the department is considering the possibility of creating new basic campsites.

“There are a number of DOC houses, some baches and a campsite already on the islands,” Godard said. “We are currently investigating which options would work best for visitors and what other new opportunities could be available, such as glamping or serviced camping.”

Iwi representatives from Ngati Paoa, Ngati Whatua and Ngai Tai were closely involved in developing the concept for the Haerenga.

Once the Haerenga is officially opened next year it will become the third public multiday walk in the Auckland region. The other two are Aotea Track on Great Barrier Island and the Hillary Trail in the Waitakere Ranges.

Day one will take in the summit of Rangitoto and explore the volcanic landscapes.

Day two will explore the cultural significance and ancient landscapes of Motutapu, the sacred island where history is revealed in the landscape.

Day three will be an opportunity to learn about the restoration of Motutapu, stroll through regenerating forest and support conservation work. 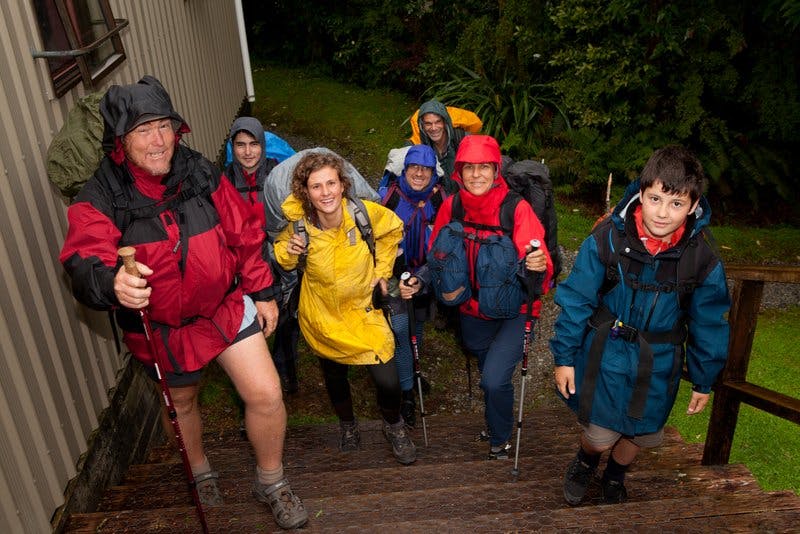 Wet weather dampened the experience for some on the Milford track, but the Routeburn and Kepler both had increases in tramper numbers. Photo: Keri Moyle/www.signsoflife.co.nz

The Department of conservation has reported its busiest ever Great Walks Season on its Fiordland tracks.

Despite dramatic weather in January that closed the Milford Track twice at a cost of around $12,000 in lost revenue, the season, which runs from October to April each year, saw more people than ever tramp the Routeburn, and Kepler tracks.

Compared with the 2011/12 summer, 1471 more people walked the Routeburn and 1422 more walked the Kepler.  There was a one per cent decrease in walkers on the Milford Track due to weather related cancellations on the usually fully booked track. Bookings for next season have already opened.

“It is fantastic to see an increasing number of people keen to get out into our national park,” said DOC Te Anau area manager Reg Kemper. “This year has also been a good year for biodiversity on Fiordland Great Walks, with strong local and national business partnerships providing extra support and funding to protect these areas and their potential for biodiversity.”

Kemper said an increase in awareness about the Great Walks was down to national promotions like the Air New Zealand safety video featuring Bear Grylls and filmed on the Routeburn.

The Kepler, Routeburn and Milford tracks are open to the public year around, but with reduced winter servicing and hut fees. During winter, the summer toilets are closed, gas at the huts is turned off and bridges that are located on avalanche paths are removed. 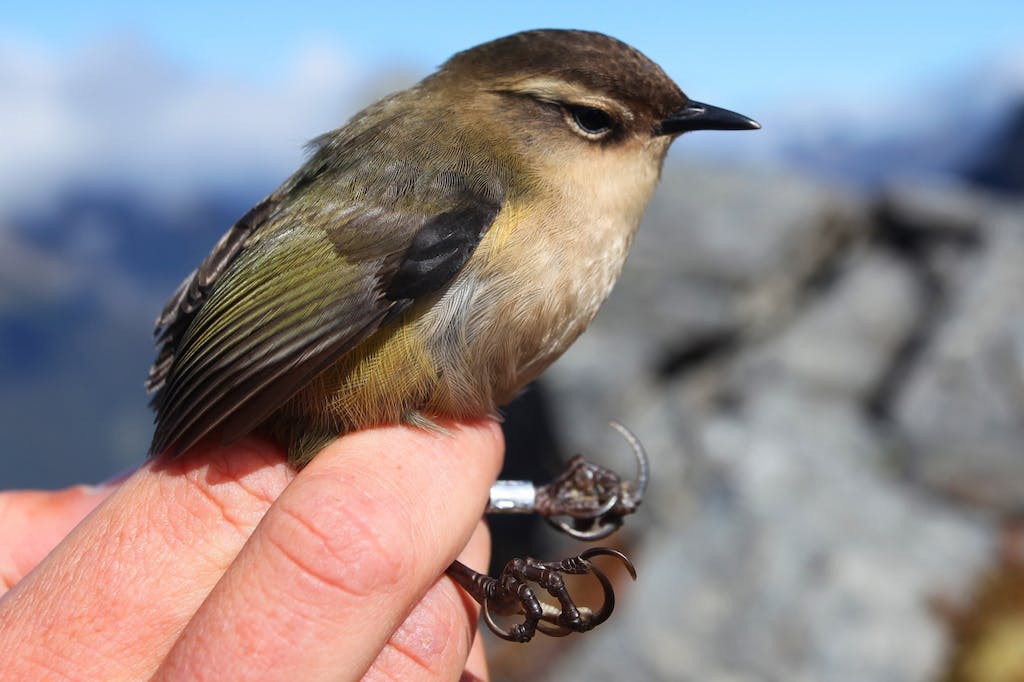 The rock wren is a tiny bird, susceptible to predation by stoats. Photo: Peter Langlands

Over the last few years rock wrens have been transferred from mainland Fiordland to Secretary Island. The transfers appear to be successful with at least 65 birds now on the predator-free island. Forty-one rock wrens have been released on the island since 2008 – indicating some have mated.

In contrast, studies of mainland rock wrens have shown a contraction in the species’ range over the last 50 years. Recently, a detailed study of 10 breeding pairs found that 100 per cent of the nests were destroyed by predators with the stoat being enemy number one. Therefore it is an important safeguard that at least one island population is established. Secretary Island is close to the bird’s mainland range on the Fiordland mountain tops.

Rock wrens are from an ancient lineage of perching birds unique to New Zealand. Several relatives of the rock wren are now extinct with the closely related bush wren only becoming extinct in the last 50 years. Another relative, the rifleman, is also declining and rated as an at risk species.

DOC’s new structure could threaten the role of conservation boards, says Professor Abby Smith, the chairperson of the Otago Conservation Board.

DOC’s newly proposed structure replaces its current 11 conservancies, each with their own conservation board, with six regions.

Smith is concerned the change is going to lead to a matching reduction in the number of conservation boards.

She said if this happens it will thin the local knowledge of boards because they’ll be responsible for a much larger area.

The key statutory purpose of conservation boards is planning, Smith said, and if the number of boards is reduced to five or six it will mean fewer people doing much more planning for unfamiliar areas.

“We won’t be able to do what we are required to do by law because of the limited resources available to us which are next to nothing anyhow,” Smith said. “We’re talking about asking people who are very close to being unpaid to do a great deal more work and cover a far wider range.”

With more planning to do, boards won’t be able to perform their other democratic functions; being advocates for their respective areas and providing advice to DOC and the public.

Smith doubts this is happening by accident. She believes the National Party has long wanted to eliminate boards.

“This government doesn’t like having the public involved in what they perceive to be their business,” Smith said. “Rather than open up the whole Conservation Act to change them, it discovered this is a way of keeping boards while having them not do what they used to do.”

Green Party MP and conservation spokesperson Eugenie Sage said conservation boards act as a check and balance to decision making within DOC and axing boards would reduce the accountability of senior managers.

Minister of Conservation Nick Smith told Wilderness it’s too soon to say what will happen to boards under the new structure, but that this is being reviewed.