The story of Sir Edmund Hillary’s climb to the top of the world has claimed a record all of its own.

Beyond The Edge, a movie that depicts Hillary and Tenzing’s ascent of Everest, amassed $320,170 at the New Zealand Box Office in the first weekend of release – the highest amount for any New Zealand documentary movie – and was watched by almost 30,000 people.

The movie, which can be viewed in 3D, blends original expedition footage with modern day shots of Everest and reconstruction shots, filmed in the Southern Alps. It’s entirely narrated from interviews with top climbers, family members of the expedition and from Sir Ed himself.

Early in November Wilderness gave away five pairs of tickets to our Wilderness Weekly e-newsletter subscribers in an online competition.

To make sure you don’t miss the next competition, sign up to Wilderness Weekly by visiting wildernessmag.co.nz and typing your email address into the ‘Stay Informed’ box. 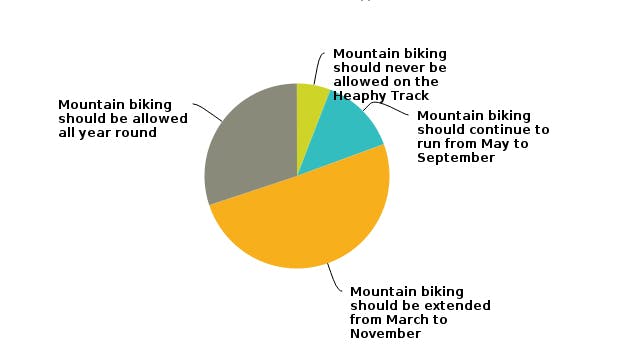 Responses to the question: What should happen now on the Heaphy?

More than four out of five Wilderness readers have voted in favour of the mountain bike season on the Heaphy Track being lengthened.

More than 700 of you have voted in our online poll and 80 per cent think the season should be longer than the current five months. In fact, nearly a third of you believe it should be allowed year-round, while just five-and-a-half per cent think it should be stopped altogether.

DOC has just completed its three-year trial allowing mountain bikes on the track between May and September. It has also built bridges and firmed sections of the track to be more suitable for bikers.

It says the scheme has been a success and recommends it continue with a view to possibly extend the season from March to November in years to come.

The results of this poll have been of great interest to DOC’s Martin Rodd, who’s been speaking to groups locally about future plans for the Heaphy. “This result shows me that before a decision is made we need to push the issue out further to seek wider comment,” he said. “It’s really impressive that nearly 750 people took the time to air their views. There’s obviously a lot of interest nationwide.

“The results are different to what we’ve been hearing locally. A lot of people in the region have given their concerns about extending the season.” 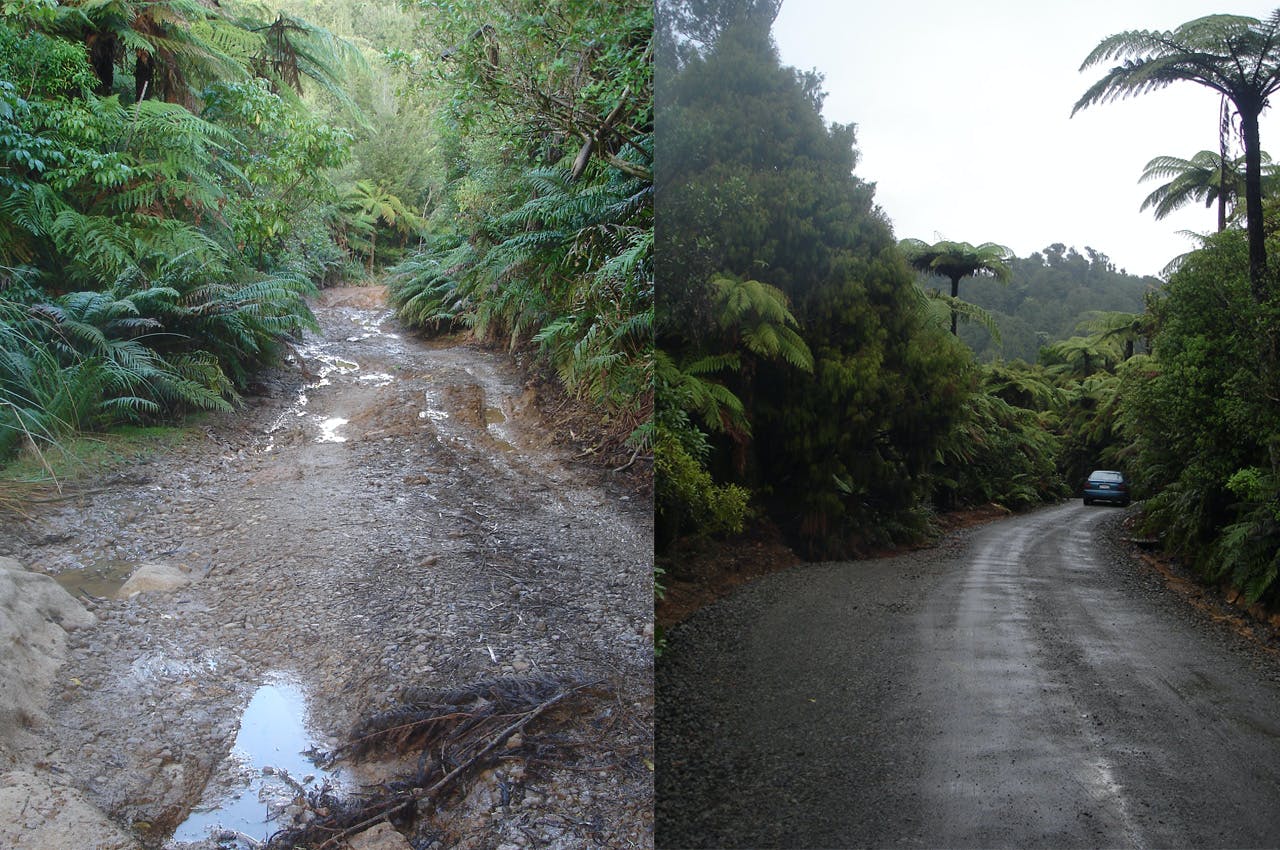 The new road, right, is a vast improvement on the old

A monumental community effort has opened up an entire region of forest to trampers and day walkers.

Whakamarama Road is Tauranga’s most direct route into Kaimai-Mamaku Forest Park. But in recent years the road has become a rough 4WD track made rougher by boy racers tearing up the track.

That is until Whakamarama Community Inc. (WCI) stepped in and helped to secure funding and a wealth of volunteers to make the park accessible again.

It started by improving the road so all vehicles could drive into the forest. Then a toilet was put in and an easy loop track is currently being built so walkers of all abilities can enjoy the forest.

“Our function has been to get the ball rolling and act as a pressure group,” said WCI Chairman Neil Rogers. “There’s been a lot of investment into the northern end of the Kaimais but not so much at this end. We hope this will be the beginning of more investment to this end of the range.

“It’s been a real team effort. I’ve only been Chair the last couple of years and before that the group had built enough trust so that organisations were happy to work with us.”

A group from the Tauranga District Health Board (DHB) who have suffered mental health episodes have been hard at work felling pine trees, milling the wood and building tracks. Local farmers have donated pine wood to the scheme, local engineers have given their expertise and even the army and navy have been involved.

The military were training in the region and asked if they could be of help. They started moving, by helicopter, 10 tonnes of metal in 30kg bags for the track. But the helicopter broke down after it had moved three tonnes so workers from the DHB moved the remaining seven by hand.

“The scheme has really given people who have suffered mental health episodes the chance to get back on track,” said Paul Mason, who supervises the DHB workers. “They love it. It gets their fitness levels high, gives them something to get out of bed for and the environment in the bush is really therapeutic.”

The next step is building the boardwalk and bridges for the loop walk and a look-out tower.

The region has historically been used for milling – first using horses, then trams, then bulldozers and part of the loop walk is being built on an old tram trail. The whole forest was nearly bulldozed in the 1970s to make way for planted pine forest. But uproar from the local community changed the Government’s mind.

Campaigners from back then ensured the forest remained, the campaigners of today are ensuring it’s accessible to all. 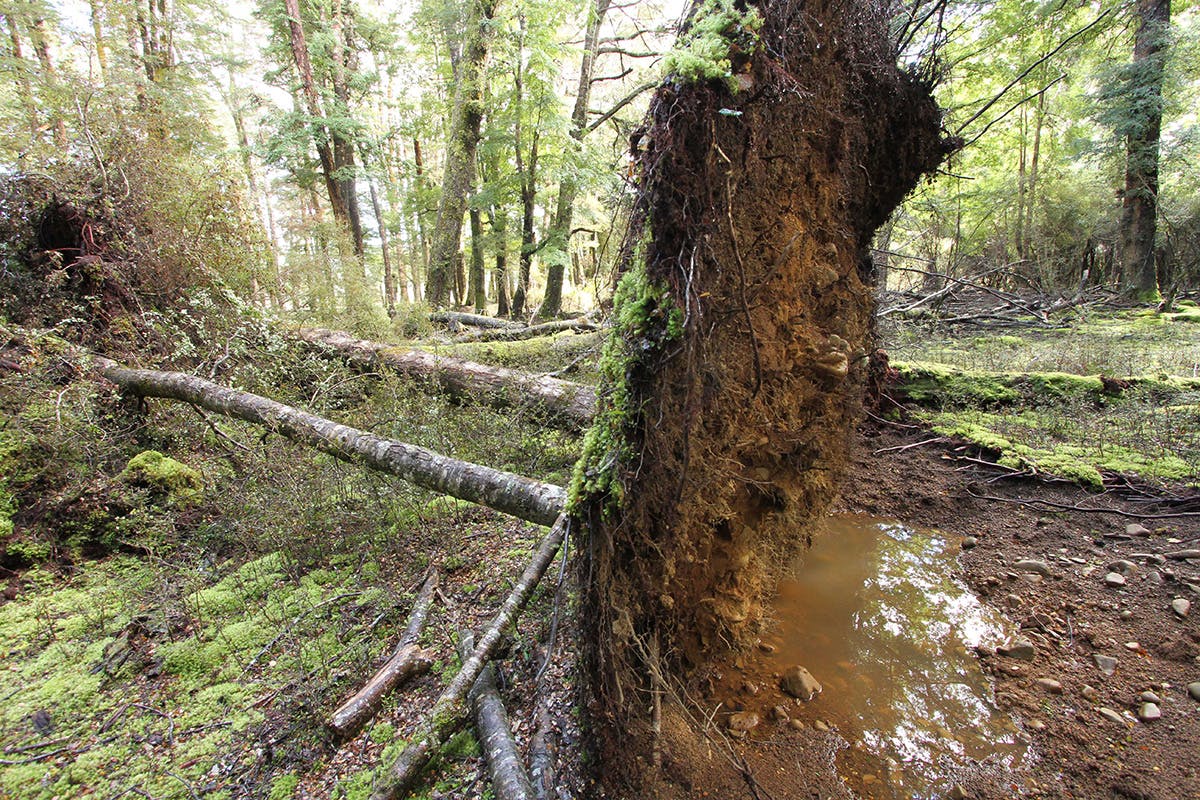 Large, shallow-rooted beech trees are a hazard for the monorail. Photo: Supplied

Anti-Snowdon monorail activists have had a kick in the teeth with two influential bodies offering support to the plans. But well known Kiwis including Sir Peter Jackson and Craig Potton have hit back with messages opposing the scheme.

Both DOC and an independent commissioner have officially advised Conservation Minister Nick Smith to give the monorail the thumbs up. The minister hopes to make the decision before the end of the year. If he approves it, then a 29.5km monorail will be built in the Snowdon Forest Stewardship Area – a World Heritage Area.

The current tramping track to Kiwi Burn Hut would cease to exist, as the monorail would cut through the valley passing right in front of the hut.

To compensate, developers plan to build a new easy-grade tramping track complete with similar hut in the same forest, but far enough away so trampers would not be affected by the monorail.

Save Fiordland Chairman Bill Jarvie said news of support for the monorail is disappointing.

“The fact that DOC has approved the plans is a disappointing signal as to the direction the department is being sent,” he said. “It’s internationally obliged to protect it as a World Heritage Area. There’s still a very long way to go before approval. The Minister has told me he has not made his mind up and he’ll be receiving letters from notable New Zealanders opposing the plans.”

One notable New Zealander who has offered support is Sir Peter Jackson, who said: “Our National Parks and World Heritage Areas were created to protect and preserve the beauty of our country for all New Zealanders – now and in the future. They should not be subject to the whim of Government or the will of business enterprise. If we don’t conserve our natural heritage – we will lose it!”

Publisher and environmentalist Craig Potton added: “New Zealanders and overseas visitors love our wilderness… in this day and age after so much loss of wilderness worldwide its madness to destroy more.”

Developers say the monorail and track would mean a 6m-wide corridor would need to be cut through the forest. But Jarvie believes the nature of the forest could make that corridor up to 70m wide. “The beech trees here have very shallow roots, meaning healthy trees can tip without warning,” he said.

DOC submitted a 184-page document to the Minister which, incidentally, is a far cry from the two-paragraph document it submitted regarding the Ruataniwha Dam in Hawke’s Bay.

In the document it said that the visual effects and the effects on flora and fauna would be minor, providing concession conditions were met. It also suggested the scheme could have a positive impact on recreation activity in the area, as the access track running parallel to the monorail would also be used as a mountain bike track. 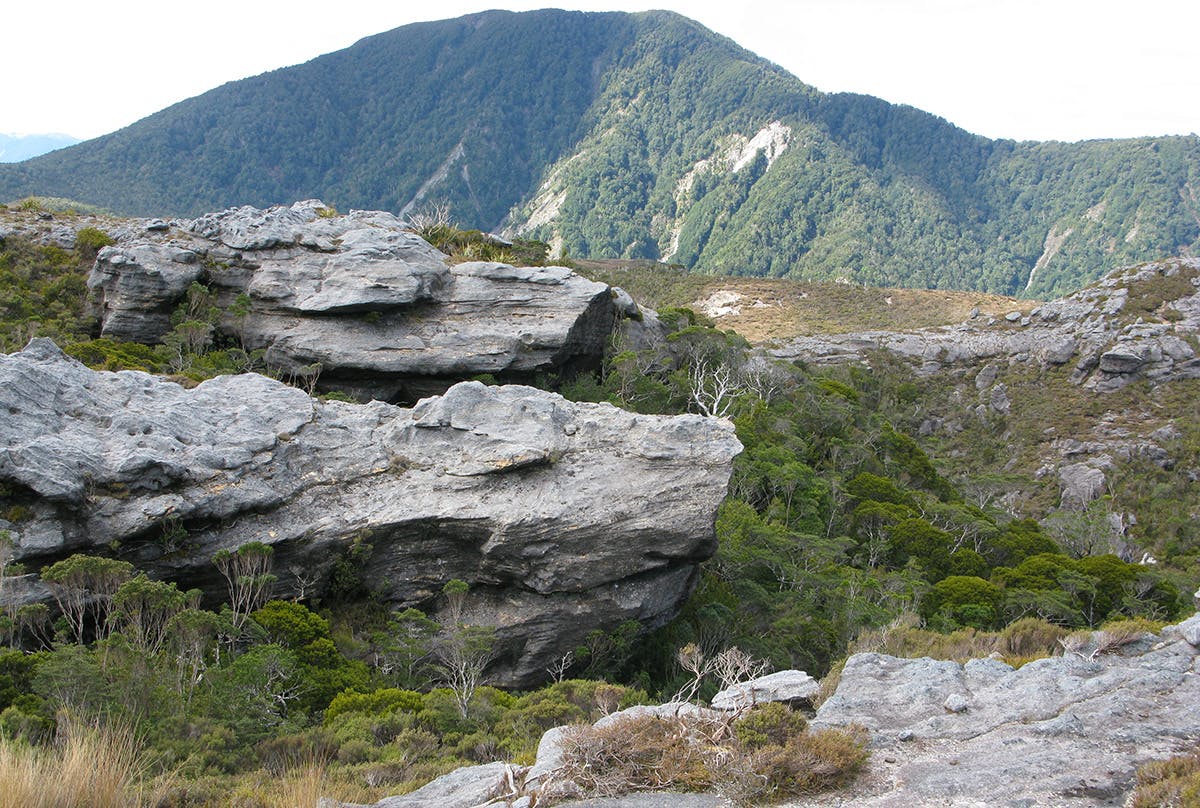 Trampers are being urged to report any potential breaches of Bathurst Resources mining consent on Denniston Plateau. Photo: Debs Martin

The Denniston Mine may have been given the green light, but Forest and Bird (F&B) says there’s plenty trampers can do to make sure things are done properly.

“Trampers can take photos to show what’s happening,” said Hackwell. “They should be looking for discharge polluting nearby water – an issue with big mines. They should also check dust is covered up and make sure nothing’s affecting vegetation elsewhere.

“Trampers should also make sure the mining is taking place where it should be and keep an eye on local wildlife.

“Solid Energy did little to abide by their consent conditions but trampers and local people were able to pressure the company to do what it was supposed to do just by having a look and reporting what they saw.”

The opencast mine is expected to start producing coal from early next year.

Australian outdoor store chain Snowgum blames stagnant sales, increased costs and Kathmandu’s aggressive discounting for having to put its business up for sale.

The chain is going into voluntary administration and managing director Ross Elliott said rent, wages and sales issues were only part of the problem. In an interview with the Sydney Morning Herald Elliott claimed Kathmandu had “perfected the art of pricing a product at an exorbitant retail price then offering it at 60 per cent off to attract buyers”.
“The adventure wear category has traditionally maintained integrity in retail pricing, but Kathmandu has changed all that,” said Elliott.

“The Kathmandu high-low pricing model where products are constantly on 50, 60 and 70 per cent discount, all year round, has forced the whole category to follow suit.”

Snowgum started life as The Scout Shop in Melbourne in 1924. It had several stores in New Zealand until recently when it decided to focus on its Australia stores.