Once again extremely lucky with the weather, we parked at the Limestone Road end, and started the climb to the high ridges of the Ngamoko Range via Knights Track. Like all Ruahine Forest Park tracks, there are no gentle zigzags to wind our way to the top – it is straight up, a climb of 700m through beautiful beech forest, stunted alpine leatherwood and onto the tussock-covered ridge.

While hard work, it’s always a great feeling, challenging the body and being strong enough to make it to the less visited parts of the country. The views from the tops are the ultimate reward, gazing 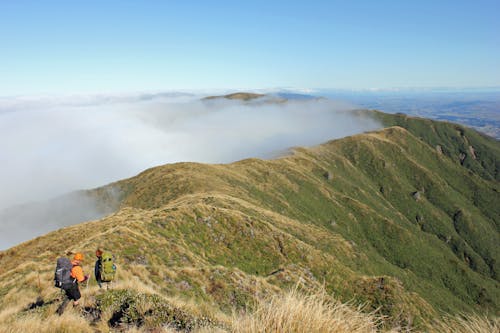 across at Mt Taranaki, Mt Ruapehu and to the farmland below.

And then it was all downhill – all 700m of it. The quads and knees felt every step, but at the bottom we just needed to cross the knee-deep Pohangina River to reach the hut.

We had the hut to ourselves, and with five in our party that was somewhat of a relief. A very quick dip in the river refreshed and revived, then the open fire was quickly lit and a cup of tea brewed. The hut is comfortable and could have easily slept 10.

According to the information on the wall the hut was named after a Forest Service deer culler who drowned while crossing a river.

Andrew set off straight away for a hunt and I went in search of Juliet, who had headed off in the other direction for a swim. I gave her a yell and she responded loudly. Shortly after we heard several shots ring out and 10 minutes later Andrew came back to the hut to pick up our Labradors to assist him in tracking the two deer he had shot. He swears our shouting startled them out of the bush and into view.

Straight back up to the tops the next morning with the venison distributed around, but most of it in Andrew’s pack. Then along the ridge and down via Shorts Track, giving us a loop.

It was another beautiful day and gorgeous alpine plants were still in flower, with even a few snowberries left to nibble on. But it felt like hard work with tired legs from the day before going wobbly every now and then.