The contrast is palpable, one moment you are dicing with logging trucks and speeding SUVs hell bent on reaching their long weekend destinations and the next you are on an isolated ice encrusted pumice road seemingly miles from anywhere.

My son and I were heading for the start of the Opureke Track, at least as close as one can drive in a two-wheel drive.

The map shows the track enigmatically starting about 800m from the road. Its not at all obvious when you get there where the track is. DOC was helpful in providing track coordinates, but there is still a choice of two old forestry tracks. We chose, wrongly, the more northerly and second of these but after half an hour of gentle bush bashing we intersected the right track.

The track climbs gently to a saddle below Opureke (1107m) and then sidles around several other hills before heading south-east into the Matakuhia River. We were staggered by the bird life. Kereru with agility I never knew they possessed frequently swooped through the bush, there were squadrons of wax eyes and fantails and a merry chorus tui. The area has been 1080’d and if this is the result, you can’t argue with it. We stopped for a rest after an hour or so and in my three decades of tramping I have never seen so many birds in one spot.

The track is initially very good and is well marked but is badly overgrown in places once it starts the descent to the river. We followed it easily enough, though care is needed in some places to find the next marker. It’s a shame as it has good bones, well benched and beautifully graded, no doubt a legacy of its NZFS origins. 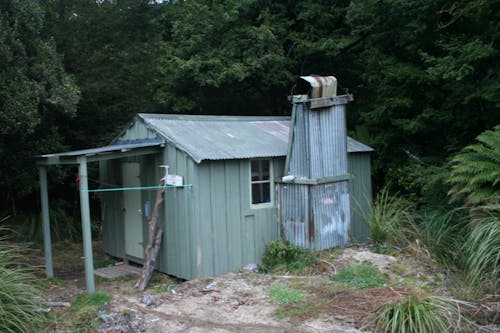 Once we got into the track builder’s mindset and always looked for the next marker along the same contour we made good progress.

At the river it was a different story. We could only find remnants of the track on the true right and we found it quicker to just walk down the river. It was a beautifully fine day but in the depths of this narrow valley frost still lay in the shadows and the water was brutally cold.

There are two gorges, both short and simple to negotiate, but the second in particular would quickly become impassable with higher flows. The other bonus of the river route was the three whio we saw.

The hut, a standard Forest Service six bunker, stands at the downstream end of a large flat with a pleasant northerly aspect that would make it a wonderful summer spot. The flood that deposited all the debris outside had clearly been through the hut, too. Even so, it was dry and comfortable inside and it has a great open fire in a raised hearth. The flood debris at the door provided a convenient supply of fuel.

My hands were so cold that I had trouble undoing my pack but we soon had a fire roaring and spent a very pleasant evening in the hut. The logbook revealed only 6-10 parties a year with most visitors being hunters concentrated around the roar.

Our return trip was about half an hour faster over the tracked section despite it being a longer climb. We benefited from the knowledge gained on the inbound trip and had used our firewood saw to cut a lot of the worst growth but plenty remains.

If you’re looking for a weekend trip that offers a bit of a challenge both physically and technically, bird life in quantity and a hut where you can be guaranteed a bunk, try the Lower Matakuhia.
– Bruce MacKenzie