A night off the volcanic ant trail

The ants were marching. That was all I could think as I was walking up to Mangatepopo Hut. Since my last trip to Tongariro National Park the track had become a lot wider and busier. Luckily there are ways to avoid the buzz.

A friend and I had found inspiration in a trip suggestion by Wilderness. From there we ran into some roadblocks. For one, there seems to be very little water in the park. Then my friend got sick, a storm was two days away and all our careful plans went out the window.

So I set out with lots of gear and even more water on a quickly modified route. The desire to be on my own became overwhelming after only 20 minutes, so at Mangatepopo Hut, I left the groomed track. Behind the hut and on the opposite side of Mangatepopo Stream, I found a faint trail leading to the western ridge of Mt Tongariro, known as Hardmans Ridge. After a short bush bash, I climbed to Pt1409 and enjoyed the silence. While my fellow trampers were zig-zagging up to South Crater, the sulphurous smell of Soda Springs accompanied me on my straight-line ascent of Mt Tongariro. 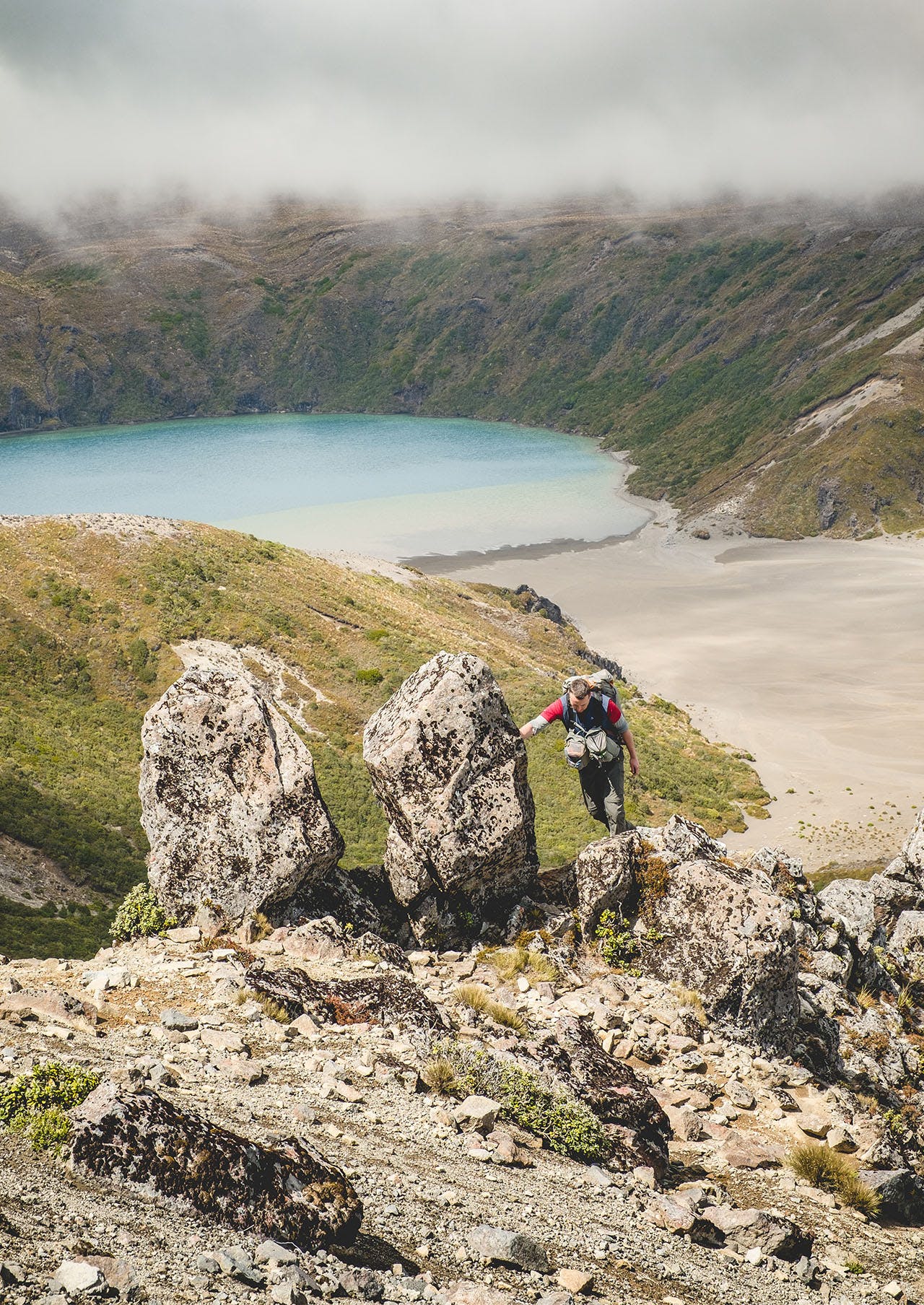 On top, I noticed the Mt Tong-ariro Summit Route was just as busy as the Tongariro Alpine Crossing (TAC). Once more, I cut my losses and headed straight south along the western flank of South Crater.

The drop into South Crater reminded me of previous trips on volcanic terrain. It is the strange contrast of vast hostility and the relative ease with which these alien landscapes can be crossed, on a good day, that gives them a special place in my heart.

I was glad to hit the TAC during a lull in traffic, so my off-track antics wouldn’t inspire other walkers to get into trouble. I followed a faint route to a saddle on the north-eastern flank of Ngauruhoe and dipped out of sight. From there, I was on my own for the next 24 hours.

The traverse around Mt Ngauruhoe and on to Upper Tama was the section of my trip where I was expecting the biggest delays. Anyone who has tried to walk perpendicular to a scree slope might be able to relate to the challenge that I was facing. I settled for a gentle descent down the scree bits and did my best to not lose too much elevation while crossing rugged channels dug by volcanic flows.

Just as I was thinking this was way too easy, I landed flat on my face. Luckily, my ego received the worst bruising. By the time the magical valleys north of Upper Tama opened up ahead of me, I had had enough of the scree slope. This was probably my favourite area of the whole trip. Dark clouds pushed their way through valleys flanked by volcanic columns. It was like a scene out of a sci-fi movie.

The little tarn north of Upper Tama turned out to be a muddy puddle, so I pushed on and found a perfect camping spot on a rocky perch overlooking the main lake. I settled in for the night to a soundtrack of rain pattering on my tent.

The next day, I walked the Upper Tama Lakes Track back to Whakapapa Village. Getting back on the ant trail seemed quite appealing after an afternoon fighting for every foothold.

– Dennis is a professional photographer and long-time contributor to Wilderness. When he is not capturing the architecture of Christchurch, you can find him teaching landscape photography workshops in the mountains.