Access
From Greymouth take SH7 to Nelson Creek Road and head towards Kopara and Heaphy Road. Access to the Haupiri River should be obtained from Gloriavale Christian Community (p: 03 738 0265)

After browsing the Remote Huts website I grew intrigued by Cone Creek Hut, deep in the headwaters of the upper Ahaura catchment on the West Coast.

The valleys and ranges of the area are seldom visited, but I planned a loop to visit Cone Creek Hut and then onto the Lake Morgan Hut.

After a few hours’ stroll following the Haupiri River, we reached the junction of Cone Creek.

The creek is tightly enclosed by the surrounding ranges and we reluctantly turned our backs to the sun to enter the wet, slippery valley. The track, which sidled above the lower gorge, was cleared and marked in 2015 by the Permolat group, but it was still hard going with a lot of windfall to be negotiated.

After an hour of steady climbing, we dropped to the creek and the travel was better, despite slippery boulders. We were surprised and pleased to see a blue duck/whio in one of the pools.

The track took to the bush again in a slippery climb to gain altitude, but within the hour we were confronted with a steep descent where we had to lower our packs on a rope to regain the creek. The boulders were getting bigger and the valley rougher, but we only had another 500m to travel before reaching the hut.

Cone Creek Hut, built in 1965 by the NZ Forest Service was in excellent order thanks to maintenance by DOC in 2012. The area around the hut is beautiful and rugged with mountain cedar, rata, kamahi, hall’s totara and mountain cabbage trees dominating the landscape.

We had an early start the next morning to tackle the steep scree and boulder slide which took us to the open tops above the hut. It was two hours hard work but it was good to be out of the bush. The track led through a small saddle and an easy valley from which we climbed a long ridge taking us to the Morgan tops. We stopped for lunch at a small tarn. The sun was out and we were in new territory with hardly a sign of human passage.

Lake Morgan came into view, nestled in a cirque of hills and snowgrass. We had a good look around and then descended from near to the lake’s outlet and through a group of tarns to Lake Morgan Hut, another cosy six bunker. Reading the hut book, which dates back to 1982, we found this part of the Morgan Range has regular visitors, unlike the Cone Creek area.

After a full day of rest  and exploring the lake environs, we headed north over Mt O’Shanessy (1462m), passing a tarn where an earlier hut had stood.

From the summit, we walked in a big arc along the tops, over Pt1196 and around to the Brian O’Lyn Route to the Haupiri River. It was a good route at first, through gently descending subalpine bush, but as we got lower the track became steeper, and the last 500m was near vertical. We were swinging from tree to tree, struggling to remain upright. The Haupiri River flats were welcome – and the water tasted good.

It was an easy walk back to the car. 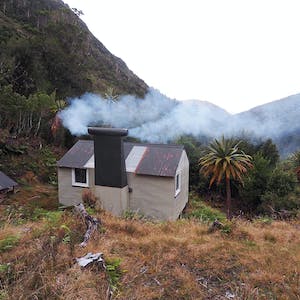 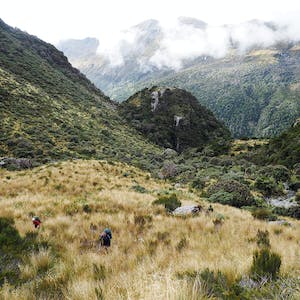 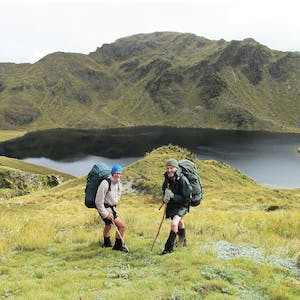 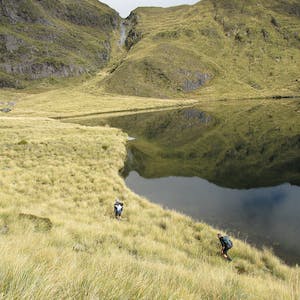 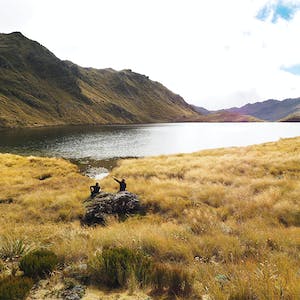 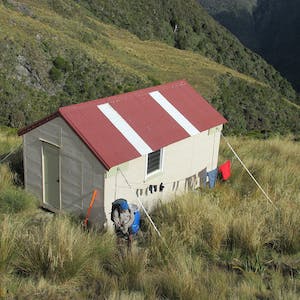 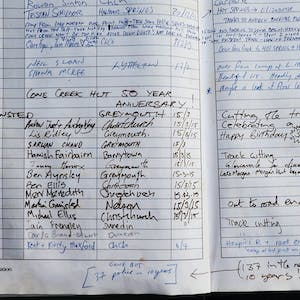