Access
The Mataura Valley is accessible via Cainard Road, off SH6 at Fairlight. A 4WD track runs along the true left of the Mataura River for approximately 5km. A large slip 100m from the end of the 4WD road needs to be negotiated

With Fiordland National Park to the west and Aspiring National Park to the north, the Eyre Mountains are a rarely-visited gem. While the park lacks the spectacular grandeur of its more popular neighbours, it has an excellent network of huts, sprawling open country and drier weather.

A weekend trip up the Mataura River to historic Beech Hut makes an excellent mid-winter tramp, remaining low enough to avoid too much slushy snow travel.

A bony vehicle track allows 4WD access five kilometres up the river to where a large slip put an end to motorised transport and forced us to continue on foot with the snow-capped Mataura Valley stretching out ahead. An easy hour’s walk up the riverbed, with some icy river crossings, brought us to Cowshed Hut, a lovely hut featuring beautiful wooden framework and an ancient-looking, but welcoming, armchair. It was a tempting place to stay, but we had our hearts set on Beech Hut, so we continued working our way up the scrubby river flats. 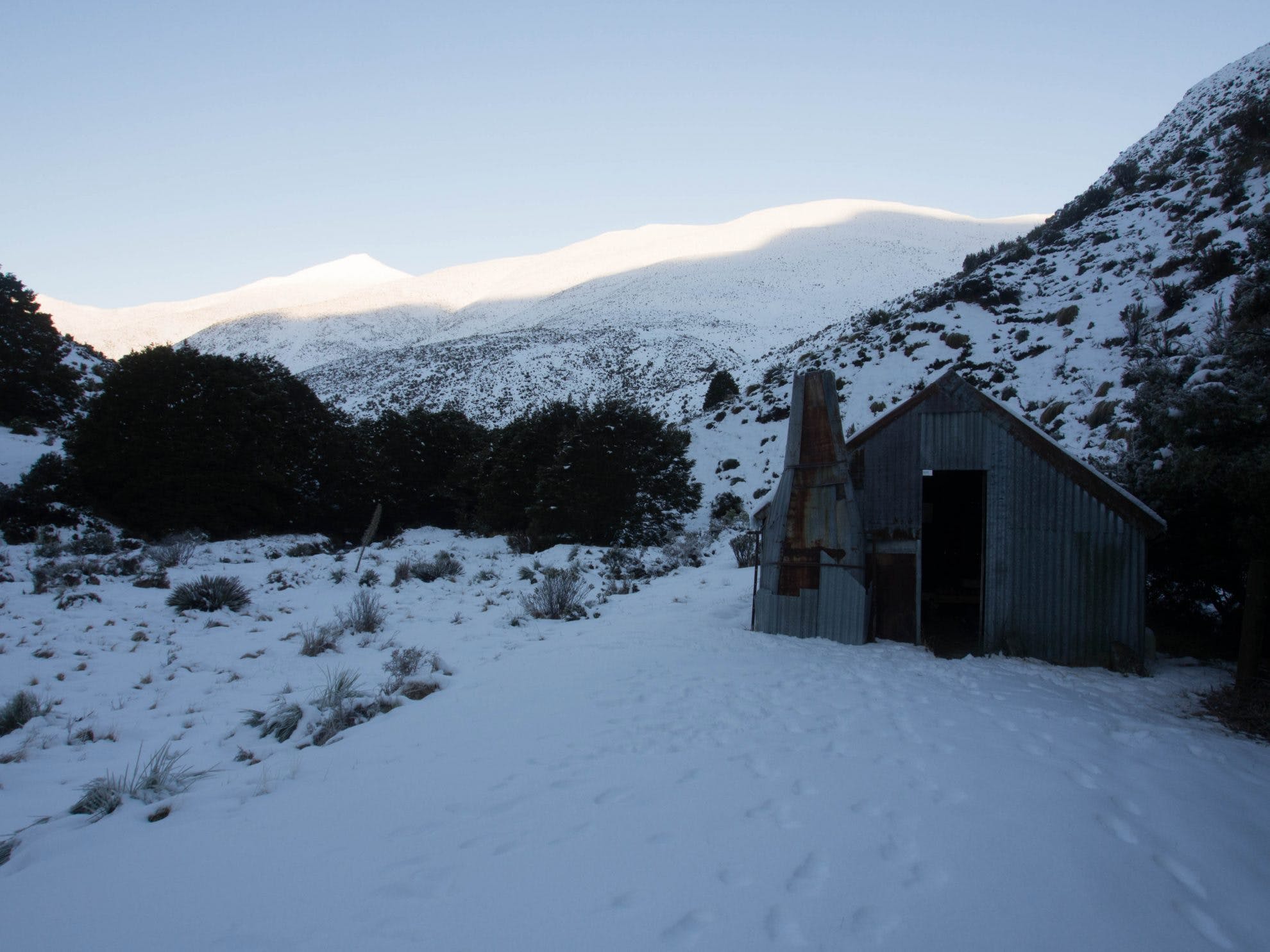 The snowline appeared to creep stealthily towards us until we rounded a corner and lost the trail beneath a carpet of white. Our easy striding slowed to beleaguered ploughing, and within a couple of minutes I was regretting not bringing any overtrousers. Dusk was just sifting through the trees when we rounded a corner to find  Beech Hut perched on a river flat. We stopped for a moment to watch the sun’s last rays scraping the schist peaks ringing the valley, painting them a soft pink before the colour slowly leached away.

There was one final stream crossing to navigate before we raced in eager anticipation towards the hut, looking forward to a snug, cosy abode where we could thaw out.

We opened the door to find a lovingly restored musterers’ hut, complete with a bare ground floor, corrugated iron walls, and a bed base constructed from beech saplings. Snow had fallen down the chimney and lay in the hearth. It was charming, historic and very cold. Fortunately, the previous occupants had left a bountiful wood supply, and it wasn’t long before we were drying out in front of a roaring fire.

Beech Hut is the oldest mustering hut in Southland, and its fantastic condition is thanks to the hardworking volunteers who helped restore it in 1989.

We woke in the morning to find our longjohns, boots and gaiters had frozen solid. After soaking our boots in warm water, we were able to jam them on to our feet, amidst much grumbling on my behalf.

The clouds cleared as we headed back down the river towards the car, crunching through the crusty morning snow. We felt invigorated and revived – hallmarks of the perfect winter trip.