Letter of the month: Solo inspiration

I loved reading the story ‘Wāhine doing it for themselves’ (February 2022) and was left feeling inspired.

As a solo mother of an eight-year-old son, our love of the outdoors, tramping and adventure has been an increasingly solo (but beautiful!) experience together. With no friends who share this interest, I have had to overcome a variety of worries and doubts to tackle increasingly long and challenging tramps alone. This has not been easy, and I have often been consumed with self-doubt about my capability, bearing the full responsibility for my son’s safety and overcoming all the ‘what ifs’.

My son and I have recently completed the Tongariro Alpine Crossing. Equipped with enough survival gear to conquer Everest, we achieved this challenging hike with a huge sense of accomplishment and a boost of self-confidence. Our next goal is a multi-day tramp.

I would love to read more stories of solo parents and their children. Such stories reflect the vast diversity of families which is so important for our kids to be able to relate to themselves, and for us solo parents can make the impossible feel possible.

I have started to do some solo hikes in recent years and it’s a different experience to tramping with others (‘Wāhine doing it for themselves’, February 2022).

What especially interested me was that when the women featured were asked about the gear they had and whether they would be okay, they found this as a negative. To me, it is a positive and I only hope that any tramper will be asking such questions of anyone whether they are old, young, male, female, solo or in a group.

Especially when you read this story in conjunction with the story ‘Terrain Trap’ (February 2022) and the author’s lesson of using the wrong footwear on an alpine trip.

Questions can be formed around a friendly interaction and being attentive to other walkers’ equipment whilst sharing information on the track and the conditions they are about to encounter. 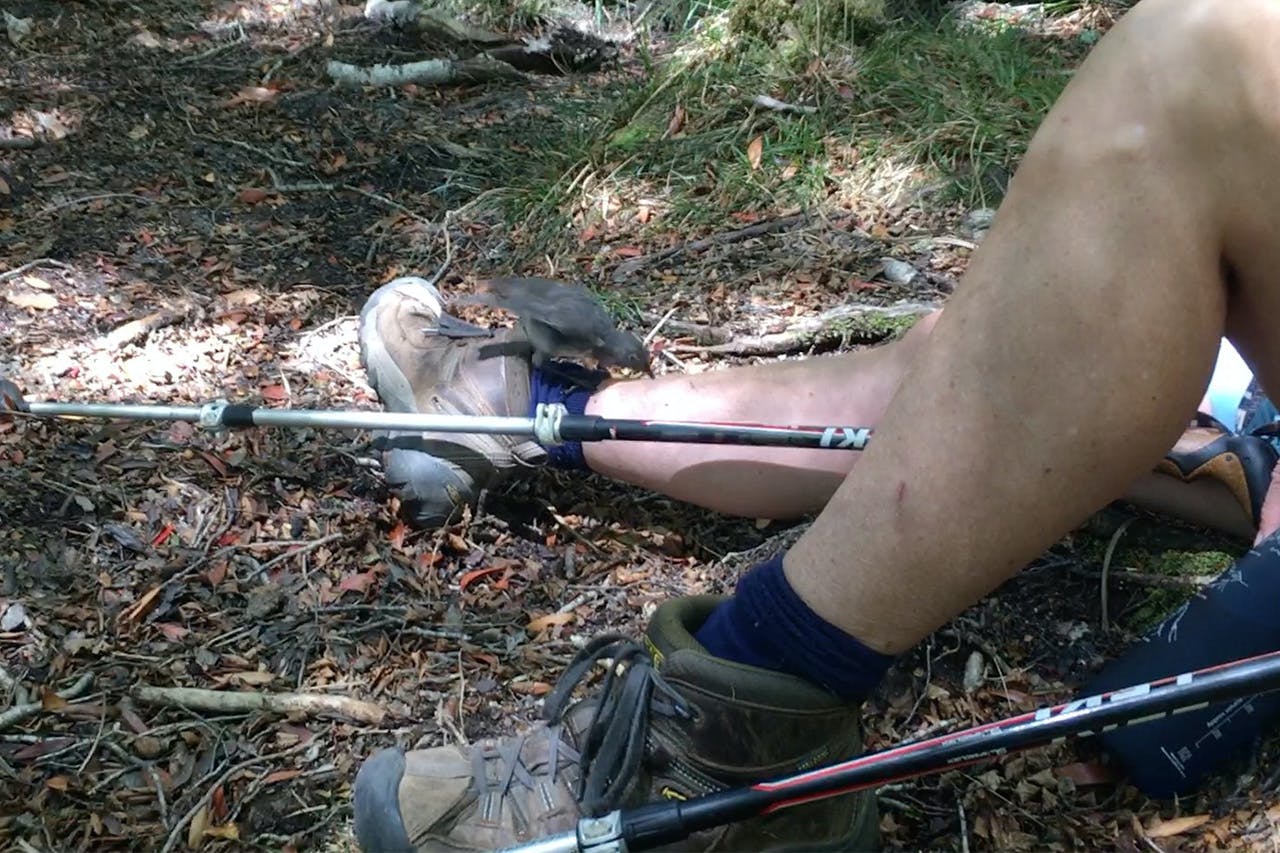 I vant to suck your blood!

My partner and I were tramping the Inland Track in Abel Tasman National Park recently and stopped for a breather at the Wainui Hut turnoff.

We were pleasantly surprised by the number of birds and were intrigued by a very friendly robin, which gave our boots a good going over. It seemed utterly convinced that something there must be edible. It checked out the tread of our boots, then the laces and eventually sampled my partner’s sock without success. Then, to our amazement, it started vigorously pecking at one place on Sarah’s leg, quickly drawing blood. It continued to peck and appeared to actually be drinking the blood! (See photo.) She eventually chased it off.

However, soon it was back hopping on my boot. It zeroed in on a small scab, ate it, and then started pecking away. Needless to say I soon put a stop to that!

I’m curious to hear if anyone else has ever had such an experience? I’ve had robins on my boots many times but they’ve never shown any interest in blood before.

Maybe this one has acquired some sandfly DNA as there are plenty around at the moment.

What an achievement by Hamish Fleming and Alastair McDowell to summit all 24 of our highest peaks in just 31 days (‘24 peaks in 31 days’, February 2022).

I hope they filmed it. I always want to see New Zealand mountains at the Banff Mountain Film Festival. If it were to happen and they didn’t capture the expedition on film, now’s the time for a documentary filmmaker to sit down with these two (and their support crew) to capture impressions while they’re still fresh.

Advice for taking babies to huts

Adele Garrick (‘Pigeon Post’, February 2022) says that worry about the practicalities of sleeping in huts with her baby holds her back from doing overnight trips. I too find that sleep is the most challenging aspect of tramping with babies or toddlers. We have three children aged from five months to seven years and have done more than a dozen tramping nights with them.

We have taken them to small bookable huts like Packhorse and Rod Donald. We booked out all the bunks and invited extended family or friends to come with us. That way we didn’t need to worry about disturbing other trampers or having people wake the baby. Tracks with private accommodation, such as on the Queen Charlotte Walkway also allow a tramping experience without having to share a hut.

As to where they sleep, non-mobile babies are fairly easy. Take a fitted sheet for the mattress, make sure there are no gaps around it for baby to fall into, and put baby on the mattress in their swaddle or sleep sack. Once mobile, they need to be contained, as crawling around the hut is much more exciting than lying down to go to sleep. After plenty of bad experiences, for baby number three we found a packable porta cot. It is like a mini tent for babies to sleep in. We will let him practise sleeping in it at home first before using it at a hut, where we will put it on a mattress on the floor.

Once our older children got to about three years, we slept in regular huts but we still tried to go in spring or autumn when it gets dark earlier, and midweek during school terms when it’s likely to be quieter.

Walk1200km goal is too short

I am pleased to see the Walk1200km initiative. I am surprised though at the low figure. I imagine that individuals who read Wilderness are generally outdoorsy types who would have a reasonable level of fitness to keep up their activity. 1200km is a little over 23km a week.

I am an active 62-year-old tramper and commenced my love of the hills in my mid-teens. I ran for 30 years until my hip last year decided otherwise for me.  I love walking, tramping, cycling and keeping myself fit. I have section walked 75 per cent of Te Araroa Trail. The latest distance last November was 300km over 11 days from Gladstone on Lake Hawea to Birchwood.

I regularly walk around 100km a week and every three weeks enjoy a 30km training walk.  Therefore, I would walk over 5000km per year plus other activities.

I’m not blowing my own horn here but I believe 1200km is an insufficient amount. However, I applaud the initiative, and perhaps in the future you could wind this to a higher level.

– We may aim for a greater distance in future, but the main goal of the challenge is to get people walking more than they usually do, regardless of how much walking they are doing now. -AH