If you want to be invincible in war and irresistible in love, the South Island town of Rangiora may hold some interest. Rangiora is 27km north of Christchurch and is home to New Zealand’s first and only commercial meadery (which transforms pure honey into molten charisma if you believe what it says on the box!).

Mead, which in its purest form is an alcoholic drink made from fermented honey, is actually rather interesting so here are a couple of the sweeter facts: Having been around for at least the last 12,000 years, mead is mentioned throughout antiquity in Europe, Africa, and Asia, although its origins are veiled by prehistory. According to historical foodie expert Maguelonne Toussaint-Samat, it can be hailed as the ancestor of all fermented drinks while anthropologist Claude Lévi-Strauss goes even further to say the invention of mead marks mankind’s passage “from nature to culture”. Wow!

Mead is also inextricably linked to marriage and fertility. In pagan times newlyweds drank mead at their wedding and for one whole moon (or month) afterwards – hence the word honeymoon. If, in nine months, a son was born, the maker of the mead was congratulated on a very fine brew.

Having said all that, if you prefer hiking to fighting and have already found love, Rangiora might still hold some interest for you, but this time as an epicentre of outdoorsy things to do.

Like much of the country, the development of Rangiora meant felling the original native bush but luckily, thanks to the dedication of the locals, a couple of corners have been rejuvenated to give people a taste of what the land used to be like.

Matawai Park is one such gem and was reclaimed from waste land by a forward thinking borough councillor 30 years ago and transformed into a microcosm of Canterbury’s flora. The idea was to create a range of habitats from the mountains to the sea and today plant communities in the park include tussock grassland, beech forest, wetlands, podocarp forests and coastal communities. The park is a wonderful place for a gentle wander.

Another nearby park is Northbrook Wetlands which was once the site of early European flax mills, a brewery, fellmongery and a tannery. Today, the wetlands have been rejuvenated and provide an excellent habitat for bird life (water fowl in particular) as well as helping clean up Northbrook Stream before it flows into the Cam River. 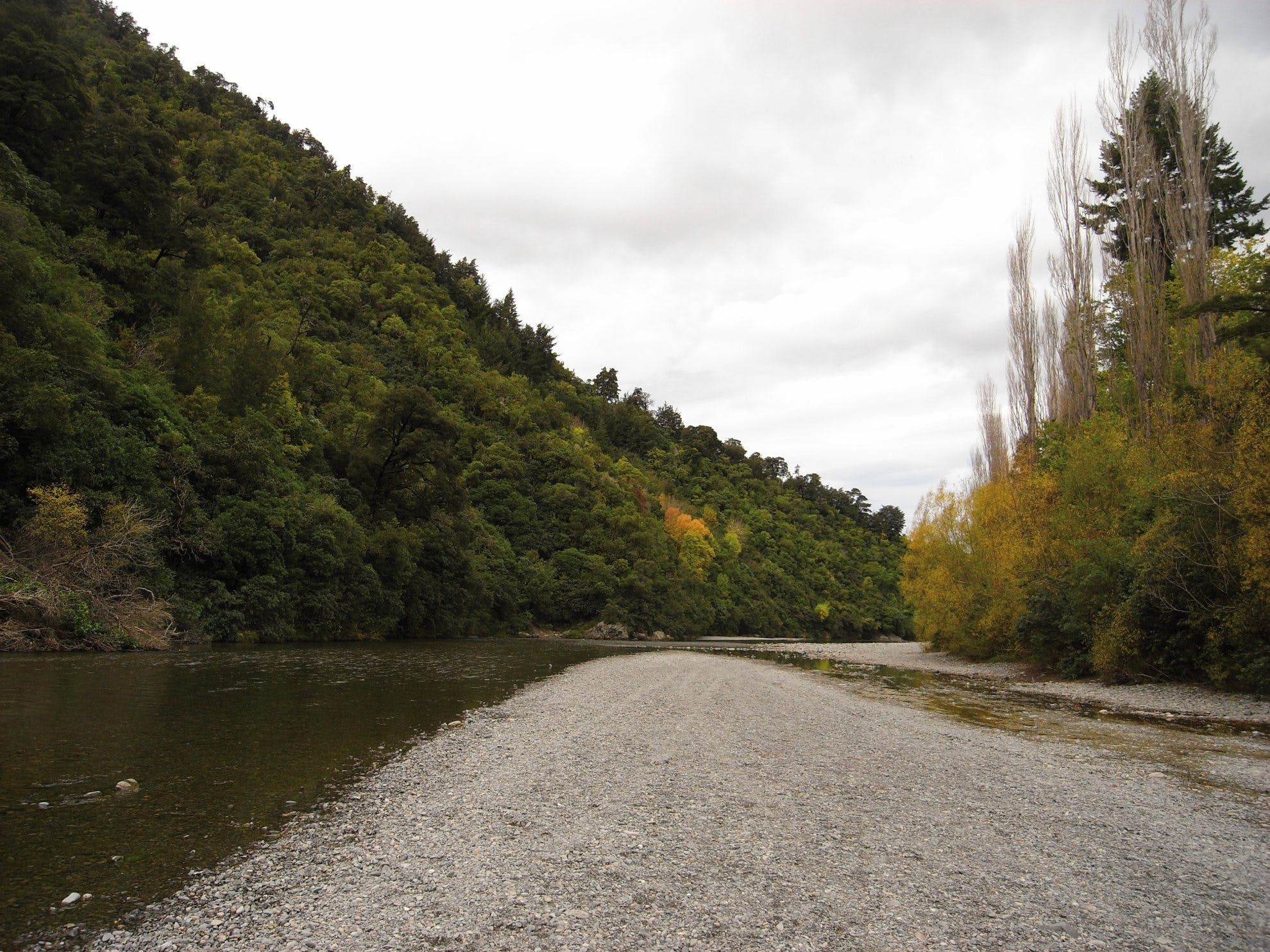 Picturesque Ashley Gorge – just watch out for the mosquitoes!

Rangiora means ‘day of peace’ in Maori and the town offers itself as a contender for Nelson’s famous 2500 hours of sunshine each year. With so much serenity and sunshine the nearby Ashley River makes for a popular summer destination for its willow-lined banks, swimming holes and picnic spots. The Ashley River also provides an important habitat for local wildlife, especially as a breeding ground for the endangered wrybill. You can follow the riverside Mike Kean Walkway, on foot or bike, starting from the Ashley River Bridge Picnic Area.

More adventurous experiences lie just beyond the Ashley River in Ashley Forest (10km from Rangiora). The forest seems tailor-made for adventure as it’s strewn with mountain biking, tramping and horse trekking tracks. A well known local challenge is to climb the three peaks of Mounts Grey, Karetu and Thomas whose craggy heads loom dramatically over the neighbourhood.

There are many more tramping and mountain biking opportunities encircling the valleys and climbing high into the mountains of the nearby Mt Thomas Forest and Oxford Forest conservation areas (30-40km from Rangiora). Here you can bag some great views of Canterbury from the summits of Mt Oxford (1364m), Mt Richardson (1047m) and Mt Thomas (1023m). One of the most striking pockets of this area is Ashley Gorge where you can swim, tramp and camp – although make sure you take insect repellent as the mossies are terrifying!

As for accommodation, Pete’s Farmstay will top off a rather special Rangiora experience as there’s no one who knows the land better than those who live and work on it. Pete and his wife Gaye have created a comfortable home for any passing travellers and visitors will soon feel like part of their extended family (which includes some friendly sheep and a couple of alpacas).

But whatever you do during your Rangiora exploits, I’d encourage you to give mead a go. It feels pretty good to keep a 12,000 year old tradition alive. And don’t forget, if you produce a son (or even win a war) as a result, the meadery would love to know.