Sitting in Volcom Lane and sipping a latte among the chess playing, floaty-clothed, nut-brown smiling folks (and their many friendly dogs), I felt a bit like I’d come home. This must be the ‘Raglan Effect’; or in other words: once you arrive you can’t leave because why would you willingly leave paradise!

OK, so it’s true that I am a sucker for floaty clothes and a bohemian lifestyle; and I think ever so highly of any local community that encourages the decoration of its footpaths and walls with mosaics and imaginative graffiti; but I really do think Raglan is a town most people would have trouble saying goodbye to.

Raglan can be found on the west coast of the North Island, just a couple of hours north of Auckland, and most of its residents seem to be either relaxing while they wait for good surf, or running towards the ocean when the surf’s up.

I arrived in town on the cusp of what promised to be a spectacular golden hour, so quickly checked into my cabin, grabbed my camera and headed out. The harbour was alive with activity and as I followed my camera further and further into the estuary I ran into a sensation I’d never experienced before. I couldn’t believe my luck! I’d inadvertently discovered one of the best things about Raglan… smud!

Smud is a delightful substance somewhere between sand and mud and can be squished between one’s toes in a sumptuous feeling which can be likened to walking in marshmallows, or perhaps warm porridge. Try it! I highly recommend a go. The best time is at low tide next to the footbridge spanning Opotoru Inlet.

Besides the smud (which I have to say is great fun to leap about in but isn’t particularly wild) wilderness areas abound. Firstly, you can’t get any wilder than the ocean itself. Here in Raglan, the ocean rolls in to shore with the regular caress of Eternity’s hand in such perfect form that surfers the world over come to try their skills on the famous left hand breaks at Indicators, Whale Bay and Manu Bay. Now I’m no surfing buff, but the idea of riding a wave for 600m sounds mighty fine.

The surfers will be content at Raglan, but what about the rest of us? Well, have no fear – we’re in for a treat. 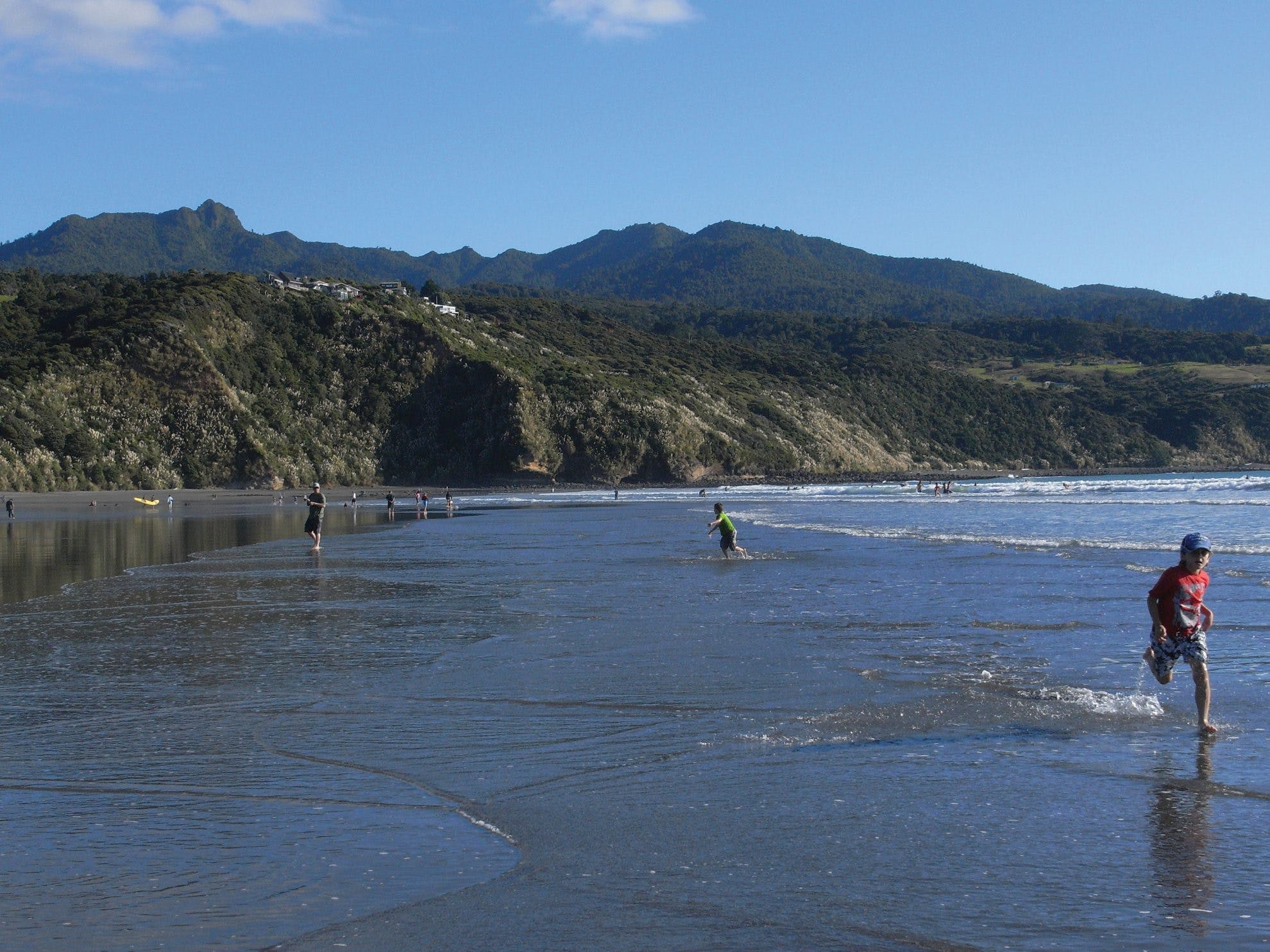 My favourite local spot was Bridal Veil Falls where the cascading water of the Pakoka River covers the green, mossy blushes of the bride in a mammoth 55m plunge. The falls are set in 218ha of native bush, and it’s a short easy track to the top of the falls where there are a couple of fantastic viewing areas. But it’s also worth following the footpath down to the base – it’s steep but you can have a break at a viewing platform midway down and spend as much time as you like in the shelter at the bottom, enjoying another of Eternity’s dexterous watery tricks.

A trek to the summit of Raglan’s pet volcano Mt Karioi, nicknamed Sleeping Lady, is a longer and more strenuous track. The Sleeping Lady hosts multiple treks and supplies the dedicated climber with views that can reach as far as Mt Taranaki, Pureora, Maungamangero and Te Aroha on a good day. There are two summit tracks so you can choose to return one-way or make a crossing.

Nearby Te Toto Gorge is another local gem and consists of three natural coastal amphitheatres which were the site of ancient Maori gardens. This site was occupied between 1700 and 1800 and the first Polynesian settlers employed ingenious gardening techniques to help introduced plants such as kumara, yam and taro flourish. Evidence of these techniques can still be seen today including the use of terraces, complex drainage systems and stone rows.

Even closer to Raglan is Wainui Reserve, a 140ha coastal reserve, 4km from town. The reserve forms Raglan’s backyard and has a latticework of tracks leading to picnic areas, viewpoints and Second World War relics. I was planning to walk along the beach to the reserve the morning before I left town but I have to admit, I wasn’t looking forward to it. The sky was so grey, bumpy and saturated with raindrops that I wished I could sew a zip in it to let the sun out.

For a long time I plodded in the gloom but gradually the clouds shifted and tooth by tooth my zip began to appear. Light chased the gloom away and by the time I reached the reserve the sun had broken through. Eternity does sound like a long time, but as the waves pounded, the clouds dissipated and the sun touched down, I captured a piece of it: a mental picture of Raglan’s paradise which I can now conjure up at will.