Time
6-15hr depending on group size and members’ caving experience

Access
From SH60, near the top of the Takaka Hill, follow an unsealed 11km side road to Canaan car park

Harwoods Hole is a popular – and spectacular – destination for those wanting a short walk, but few venture into its depths. Alina Suchanski reports on a group who abseiled down…down…down

Standing on a ledge less than a foot wide above a 176m vertical drop, 80-year-old Ray Willett could see the huge hole, but not the bottom. Having just descended the first 30m of the steep rocky cave entrance, he was still attached to a safety rope. Andrew was already there, helping other members of the group with the take-off. Under his watchful eye, Willett hooked his safety rope to the wall, reached for the main abseiling rope and clipped it onto his descender. Balancing on the narrow ledge, facing the rock wall and with his back to the abyss, he unclipped his safety rope and stepped into the darkness.

Sitting in his harness, comfortably in control of his descent, Willett looked around. As he moved further away from the source of light above, the cave became murky. The rock was dark and wet, the void large and airy. After about 20 minutes he reached the landing block where Paul was waiting for him.

“I’m safe!” he yelled back to Andrew, signalling for the next person to follow.

Harwoods Hole is part of the cave system located in Takaka Hill, between Golden Bay and Tasman Bay. Starting at the surface as a 50m round entrance and descending 176m, Harwoods Hole connects with the 357m deep Starlight Cave. The long rope descent is considered one of the most spectacular caving experiences in New Zealand.

The Department of Conservation warns it is dangerous to even approach the edge of the hole, let alone descend into it and attempt to walk through the cave. There have been a number of search and rescue operations in the cave system because of inexperienced or poorly prepared groups. Falling into the hole, being hit by a rock, taking a dive into one of the many underground pools, hypothermia, getting lost – either in the cave or in the bush on the way out – are some of the dangers facing those attempting this adventure.

Ray Willett and Paul Nankivell became friends in the 1980s, when Nankivell spent 10 years in Te Anau working as a builder and guiding on the Milford and Routeburn Tracks. Later he moved to Nelson and settled in Mapua.

Willett, also a former Milford Track guide, has been living in Te Anau since 1970. But years ago, in 1957, he was a guide at Waitomo Caves and in his spare time explored ‘wild’ caves in the area.

It was Nankivell who invited Willett and three others on the Harwood Hole trip. Another friend, Andrew Smith, was coerced as a guide. An industrial abseiler by trade and a recreational climber and caver who has been through Harwoods Hole and Starlight Cave 43 times, Smith was well qualified for the role.

What was special about this particular group of amateur cavers was that their average age was 66, with the youngest being 59 and Willett the most senior.

Before descending into the cave, the group spent a night at a hut belonging to the Nelson Speleological Group, where they underwent a briefing and learned how to ascend and descend using a rope.

The following morning, kitted out in caver’s helmets, torches, ropes and descending and ascending tools, they set out for the cave. Carried in dry bags were a change of clothes and lunch.

At the entrance to the hole, Smith set up the ropes. A shorter, 30m rope was used for descending to the take-off ledge, and 176m of non-stretch rope for abseiling the entire depth to the base of Harwoods Hole. 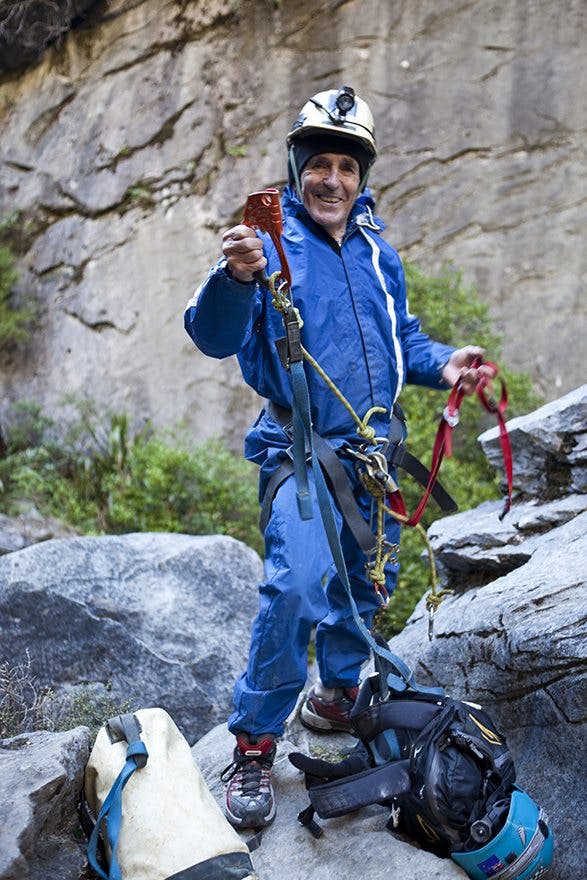 Smith went first, stopping at the take-off ledge to assist the others. Nankivell followed and was the first to descend all the way to the bottom. Willet was next, and then finally Smith completed the long abseil. It took a couple of hours for the whole group to reach the landing rock.

“It was a spiritual experience,” Willett recalls. “Total silence. Absolute calm. The abseil was by far the easiest part of the trip.”

But that was just the beginning. After a short break they set out on an arduous four-hour trip through the cave. Places within the cave with names such as Dave’s Horror or Shortie’s Terror, did nothing to instil confidence in the first-time visitors.

The cave contracts, forcing cavers to crawl and squeeze through narrow gaps in the rock. Then it widens, revealing a subterranean wonderland full of fantastic rock formations, stalactites and stalagmites, waterfalls and crystal-clear underground lakes.

There are many obstacles along the way: a steep scree at the beginning of Starlight Cave, minute ledges to walk on, rock walls to climb up or down, deep pools of water and narrow squeezes to get through are some of the challenges.

There are hairy moments too. At Shortie’s Terror, the cave narrows and each caver has to squeeze through a key-hole shaped opening in the wall, with a deep pool of water below. Each caver has to stand wide-legged, almost in full splits, torso bent forward nearly touching a deep pool of water below. In this precarious position you have to pass your pack through a hole before getting your body across. Nankivell slipped and fell into the water.

“This is very risky, as once you get wet, you get cold,” Smith explained later.

Fortunately, the cave exit was not far away and Nankivell was soon able to change into warm clothes.

When it was Willett’s turn to squeeze through Shorties’ Terror, his hips got stuck in the narrow section of the key-hole. He admitted he never swore so much, but with Smith’s help managed to free himself from this predicament.

Coming out of the cave into the warm sunshine was a welcome relief. “Towards the end, I was getting quite cold,” Willett says. “Then we saw daylight and felt this incredible heat, like the breath of a dragon. The rocks around the cave exit were so hot you could cook an egg on them.”

The cavers changed into dry gear and spread their clothes on the rocks to dry.

After resting up, they began the 5.5hr tramp to get back to the car park, finally arriving at 10.30pm.

Speaking from his home in Upper Moutere near Nelson, Smith said this was the oldest group he’s ever taken through the cave, but he found them easy to work with.

Asked if he would do it again, Willett said: “I’ve done it twice – the first and the last time, but I would go back with Andrew. As long as he was there I’d do it again.”

Harwoods Hole is a serious undertaking and there have been several accidents in the cave. CaveSAR rescuers have felt a growing frustration at inadequately prepared people attempting the trip.

The technical level of the cave at the base of the Harwoods Hole main shaft is often underestimated. The trip through the cave involves tricky navigation, and swimming in very cold water. Any accident in this section of the cave is compounded by the extreme environment and lack of communication with the surface, meaning rescues can take in excess of 24hr. Cavers should each have at least two light sources and wear a helmet and thermal clothing layers as well as carry a survival blanket and a team first aid kit.

If you’re interested in learning how to cave safely, contact the New Zealand Speleological Society (NZSS) for information on your local caving club: www.caves.org.nz.