Hut bagging may not be a Commonwealth Games event, but one Nelson family takes their tramping very seriously – even a bit competitively. Super-keen trampers, the Glovers have between them visited hundreds of huts – and plan to visit all those in the South Island.

Parents Mike and Deirdre were keen trampers long before the kids came along, having been Waimea Tramping Club members for 25 years, but having recently shifted to the Nelson Tramping Club. Since the arrival of twins Wade and Alice, and younger sister Chelsea, they’ve hardly slowed down, with tramping still a major part of their life – the family heads for the hills at least once a month. It’s a generational thing with the Glovers: Mike’s father was a Nelson Tramping Club stalwart, and helped build both the Rocks Hut and original John Tait Hut, and restored Flora Hut too.

Alice and Wade (both aged 15) and Chelsea (14) undertook their first overnight trip into relatively accessible huts near their home in Hope, Nelson. During the summer of 2001-2002, with the children’s ages ranging from 5 to 6, the Glovers stayed in Flora Hut (Kahurangi), Moa Park (Abel Tasman) and Coldwater (Nelson Lakes) – the first trips where the kids carried their own packs. Since then the bug has well and truly set in, and the family has cast their shadow over the door of nearly 200 huts – more than a quarter of the total in the South Island, which numbers around 670. By February 2011, Wade had clocked up more than 200 huts, with Chelsea and Alice just a few huts behind. Not to be outdone, the sisters taunt him about the fact that they climbed Mt Hopeless and bagged Hopeless Hut in Nelson Lakes when he was unwell.

Each family member has slightly different favourites: Wade rates newer huts Buckland Peaks (Paparoa) and French Ridge (Mt Aspiring) highly, although admits to a fondness for old huts like Kahurangi’s Waingaro Forks. Chelsea reckons Kahurangi’s Trident Hut is the coolest, while Alice says Liverpool Biv in Mt Aspiring National Park is the best. All agree, though, that once out of the hills, Pizza Hut comes top.

The Glovers have a friendly rivalry with family friend and fellow hut-bagger Dion Pont – who is always trying to stay ahead. So after bagging Branch Creek Hut (Kahurangi), the Glovers were delighted to leave a message for Dion in the hut book telling him they beat him – by two days. He was “spitting” by all accounts.

Wade says he likes huts “because they are all different”, while Chelsea reckons they’re good because “you don’t have to sleep in the tent”. An experience with a wet sleeping bag while camping helped cement that opinion. 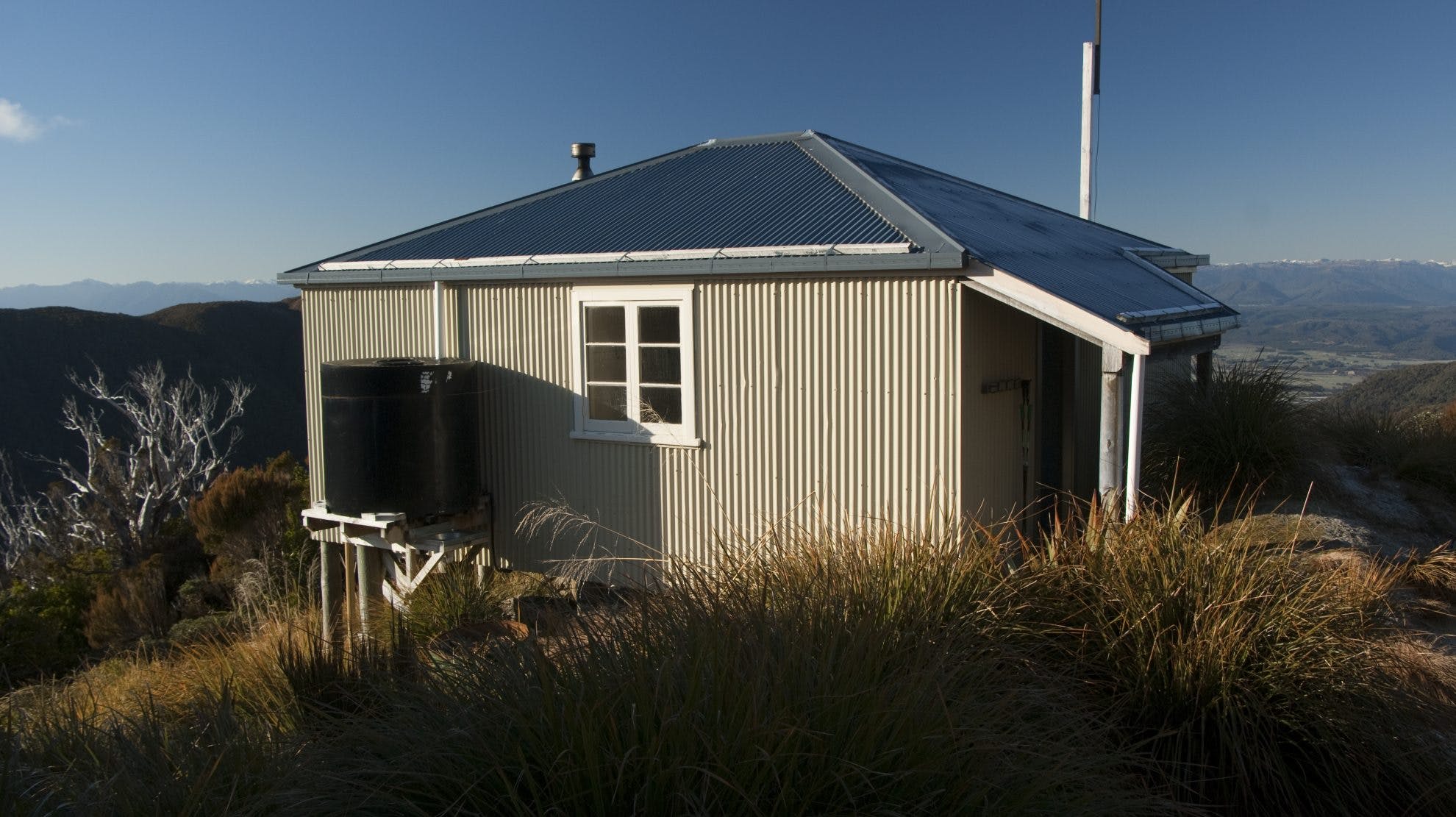 Ces Clark Memorial, a cosy cabin on the Croesus Track

Hut versus tent comfort is, however, a relative thing: the family recall a night in Mt Fell Hut (Mt Richmond Forest Park) with 13 people crammed into six bunks when tolerance was necessary.

Normally though, they thoroughly enjoy meeting other people at huts. “It’s excellent for the kids to get on with whoever is in the hut,” says Deirdre:

Having featured in newspaper articles – most recently in the Nelson Evening Mail – you might imagine that these kids are publicity-seekers. But quite the contrary, the Glover children are not at all boastful about their extraordinary achievements. During my visit to their Hope home, they quietly enthuse over Wade’s photo album, which features pictures of all the huts he’s visited. Each one is carefully named and dated with the altitude recorded. Different pictures bring back different memories: the hut where they met a Japanese tramper who taught the kids some basic Japanese; Walking in sandals to a hut on the Old Man Range that looked much closer than it turned out to be. An image of the two-storey Venus Hut on the Leslie-Karamea Track taken in July prompts Deirdre to remark: “It was perishing cold – colder inside than out.”

The Glover’s house overlooks Mt Arthur and the Twins, and from one of the top-storey bedrooms they can see Mt Owen, providing a constant reminder of their favourite tramping area: Kahurangi. The family head away tramping every school holiday and at least once a month during term time.

They reckon that by-and-large DOC does a great job of looking after huts, and often makes small but good improvements, like a recent upgrade of Fishtail Hut in Mt Richmond Forest Park.

So how did the obsession with huts begin? Of the tramping Deirdre says: “The huts became a focus because they were something to aim for with young kids. People ask ‘How do you get your kids to walk?’ and I don’t know how to answer them – we’ve always done it. Other people say ‘I think the kids are too young – we’ll wait until they are older’. But perhaps they leave it too late. We’ve always tried to do interesting walks – with a swingbridge or something of interest to the children.” 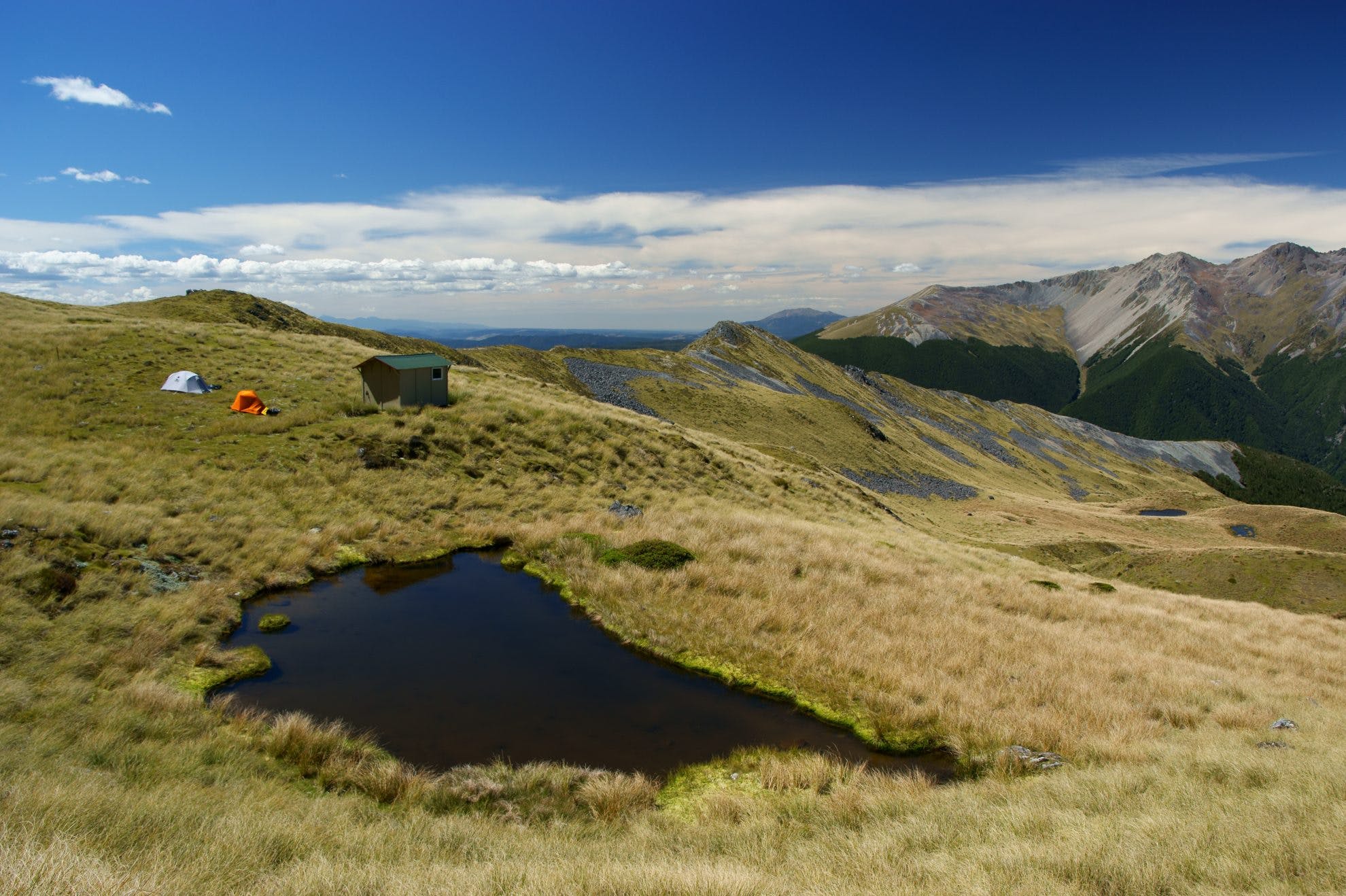 Adds Mike: “We’ve reached the point in the last few years where we can say ‘There’s a big day ahead’, or ‘There’s a climb coming up’ and the kids will know to keep going. It’s important to learn not to give up at the first bit of discomfort. We can do quite challenging trips now, like the Anatoki Peaks (Kahurangi).”

Deirdre ponders what the future holds. “When the kids are older they will want to do their own thing, but we hope the lessons they learn about tramping – about tolerance, about not giving up easily, about appreciating what is out there – will carry over into whatever they do in their career and recreation.”

Last year, Wade, Chelsea, Alice and a friend embarked on their first overnight trip without adults. The children walked into Salisbury Hut, Kahurangi National Park and found they had the hut to themselves. But that night a storm and strange noises made visiting the toilet an unnerving experience.

But one thing’s for sure, it’ll take more than bad weather and scary sounds to keep this family from the hills.