If there’s one thing an experienced mountain search and rescue volunteer will have in abundance it’s gripping, terrifying stories – some heart warming, others heart breaking.

And while these tales are fascinating in their own right, often the rescuer will only know half the story.

This is what mountaineer and LandSAR Wanaka volunteer Phillip Melchior discovered when researching his book Mountain Rescue. “It became immediately obvious to me that you couldn’t tell the story of the rescue without telling the story of why they needed rescuing in the first place.”

By speaking to those who have experienced being rescued, Melchior discovered that a standard rescue for a SAR volunteer may well be an epic drama for those involved.

After discussions with experienced rescuers such as Gary Dickson and Aaron Nicholson, Melchior chose 11 of the most interesting stories of great trips turning to disaster, and the subsequent rescue efforts.

Starting with a seven-day rescue on La Perouse in 1948, the book gives detailed accounts of various disasters, including the infamous avalanche on Mt Tasman on New Year’s Day 2003, and the desperate attempt to save young Dion Latta who had become trapped in a waterfall in the Motatapu River in 2012.

“As a rescuer, you see the end results, but you don’t see what happened to make the rescue necessary in the first place,” explains Melchior, who says the two most common mistakes seem to be underestimating the weather and how quickly it can change, and not being equipped to deal with things going wrong.

“An absolute classic is the case of three young Americans who fell off the Breakaway, at the end of the Bonar Glacier on the slopes of Mt Aspiring. It was a classic case of keen young guys with more enthusiasm than experience or expertise.” When the weather turned, explains Melchior, they didn’t have the experience to realise the danger they were in and chose the wrong route down. Sadly for the trio, one died in the fall while another needed his leg amputated.

Melchior was involved in just a few of the rescue attempts in the book. He used experience from his previous life as a journalist to piece stories together interviewing rescuers and survivors. But he was involved in attempts to rescue Dion Latta, an experience that still haunts all involved.

Dion had got his foot severely stuck in a rock at the top of a waterfall. The tremendous force of the water had thrown him over the edge, so he was dangling amid icy water; its force preventing anyone from being able to free his foot.

An air pocket beneath the waterfall meant he could breathe and he was freed after three hours which was, tragically, just too long to be able to save him and he later died from the effects of hypothermia.

“That was, undoubtedly the one with the biggest psychological impact on the group as a whole,” recalls Melchior. “We were struggling to keep him alive and the fact it was unsuccessful had a big impact on people.”

Dealing with death is a harsh reality for anyone who chooses to volunteer with search and rescue and is something people deal with in different ways.

“As a journalist I was exposed to more sudden death than I would have chosen, so it wasn’t a new thing for me. Unfortunately, it’s not a new thing for most mountaineers. It doesn’t make it easy, but you do these things with a combination of detachment and involvement.

“Davie Robinson, one of our leading guys, talks to the person he’s dealing with as if they’re still alive, even if it’s crystal clear they’ve died. He’ll say, ‘we’re getting you home to your family, everything will be alright’. He feels it makes it easier for him.”

Melchior believes a previous macho culture among SAR personnel of ‘shrug your shoulders, have a beer and that’s the end of it’ has now changed. “People talk about these things more than they used to, which I think is a good thing. It’s better than storing things up and pretending you’re not affected when you are.” 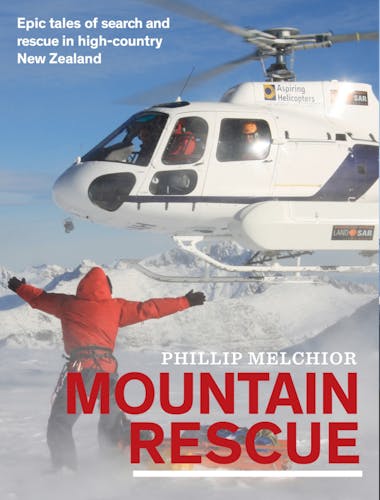 Writing the book helped Melchior to focus his mind on something other than his own mortality. When he was first approached to write it, he was about to begin chemotherapy for amyloidosis, a rare blood disorder not dissimilar to leukaemia. The chemo was successful and Melchior is now in remission three years after initial diagnosis – an extraordinary result considering 95 per cent of those diagnosed die within two years.

And like this success story, Melchior’s book finishes with a positive tale. Canadian climber Ian Larratt is only alive today because of his PLB and observant father.

In 2012, the 27-year-old was climbing Mt Aspiring when the weather turned. No-one knew he was on the mountain, except his father who could follow his progress thanks to Larratt’s PLB putting out a signal every 10 minutes.

“His father could see he’d reached the edge of the Bonar Glacier and hadn’t moved for five hours,” explains Melchior. “He thought there was something wrong and called the police.

“If it hadn’t been for his father it’s highly probable that by the time he was rescued he could have died from exposure.”