There is a well-known saying in mountaineering circles: ‘There are old climbers and there are bold climbers but there are no old bold climbers.’ If ever there was a bona-fide case for this adage it would have to be that of Bill Denz, writes Paul Maxim

Bill Denz, a Kiwi climbing sensation, was descending from a camp high on Makalu’s West Pillar one sunny afternoon in October 1983, when a small avalanche swept him into a basin and buried him beyond the reach of Peter Hillary and their two Australian teammates. He was 32-years-old.

When word reached his homeland a week or so later, many in New Zealand’s climbing fraternity were shocked although not particularly surprised by the news of Denz’s death. For most people he was a bit of an enigma, known more by reputation than acquaintance. In fact, local climbers hadn’t seen much of Denz during the previous few years as he had based himself in California and Alaska, conducting global excursions in an all-out effort to quench the insatiable climbing bug that had consumed him since his teenage years.

During his absence, a trail of stories filtered back to New Zealand in dribs and drabs: tales of high adventure on North American big walls, Alaskan and Patagonian mountains, and illegal jaunts into Nepal and Tibet. These stories substantiated the previous rumours about this pocket-sized climber with apparent scant regard for conventional, safe and circumspect climbing techniques. Denz, people heard, was brash, competitive, in-your-face and infinitely bold. Not interested in repeating routes, no matter how hard they were, his focus lay entirely with the unclimbed, un-soloed and un-wintered.

Between 1971 and 1978 Denz built up a formidable reputation from a seemingly never-ending succession of now legendary climbs in the often stormy Southern Alps: the first solo Grand Traverse of Aoraki/Mt Cook (as a 19-year-old soldier), the first solo of Mt Tasman, the first ascent of the Balfour Face of Tasman and a solo on the South Face of Aoraki armed with nothing more than two ice screws and the infamous coffee jar of water (Denz substituted a missing water bottle with an empty Greggs coffee jar and in many way this symbolised what he was all about during those early and formative years – unconventional, minimalistic, resourceful and frugal. To make his point, he left the empty jar on the South Summit as if to say ‘Take that!’). 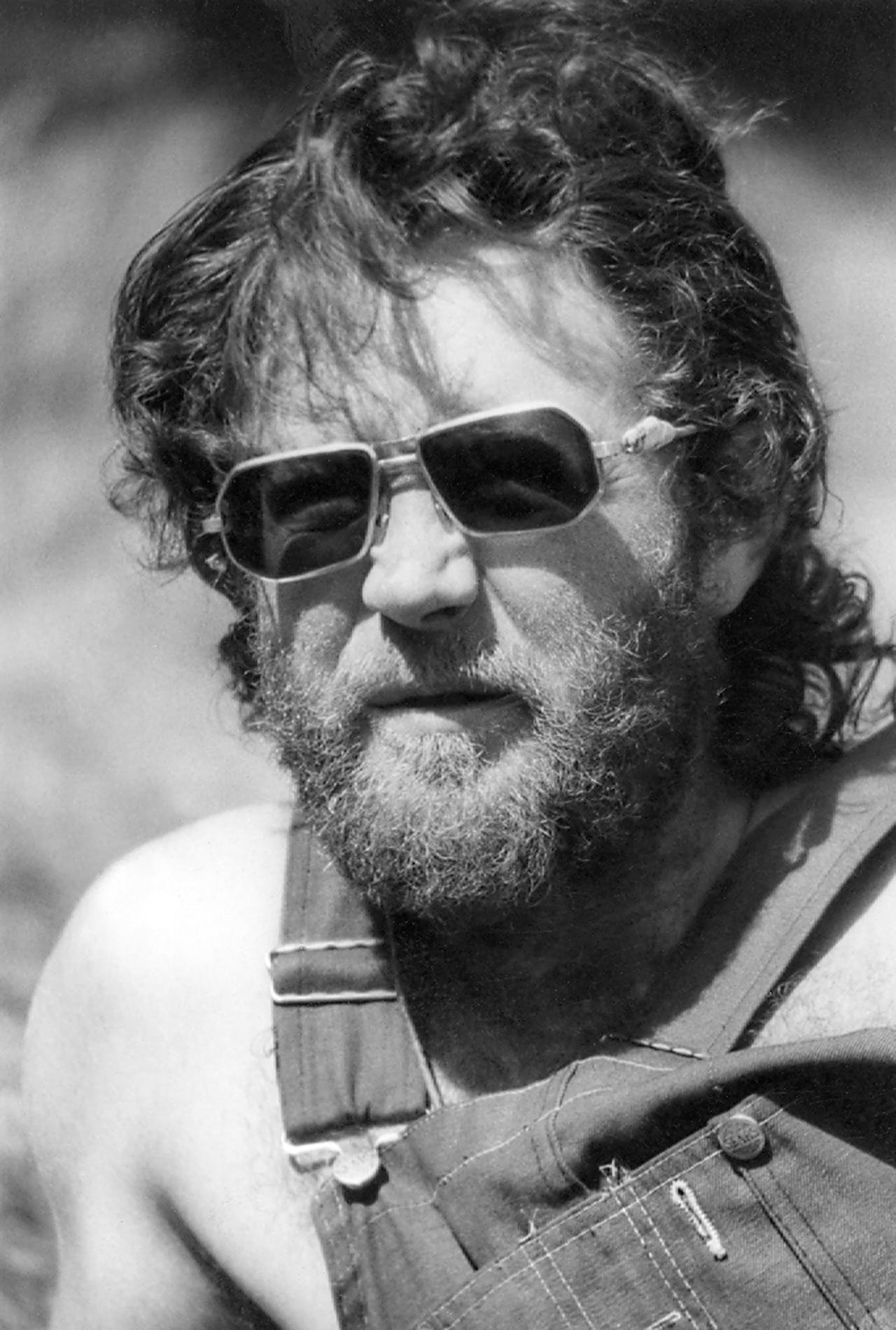 A few days later came another breakthrough, a new line – again alone – up the biggest ice feature in New Zealand, the Caroline Face. On that climb he had topped out in a storm and had to battle his way off the mountain, learning what his body could withstand and storing that knowledge away for use years later on Cerro Torre. Then there were the big wall adventures and close shaves in the Darran Mountains – more learning by experience! Always the hard way, the way that Greg Child once coined as ‘the Denz Option’.

Early in the winter of 1975, Denz racked up two climbs that, in retrospect, were probably the culmination of all he had been striving for during those early years in New Zealand: the original Gunbarrels route on the South Face of Hicks and the first winter ascent of the Balfour Face. The shady and austere flank of Hicks had already felt the bite of Denz’s ice tools but it was a much steeper line out to the left that held Denz’s attention and it was to this that he returned in June with Murray Judge and young Phillip Herron – his teenage protégé. The hardest pitch on the 600m-high route fell to Denz – a 30m ice stalactite hanging off a rock overhang that had been severely problematic on previous battles.

Barely had their gear had a chance to dry out before Denz and Herron returned to Aoraki/Mt Cook to attempt the Balfour Face. The original idea had been to complete the climb in a weekend from Dunedin, but it quickly turned into a three-and-a-half day epic of deep powder snow, iron hard water ice and frigid temperatures. The pair endured two nights out on the mountain. Leaving the primus behind to save weight, they found their water bottles freezing solid inside their sleeping bags, they also broke the tips off their Chouinard ice tools. But they succeeded and nobody was to repeat the Balfour in winter during Denz’s lifetime.

Only months later Denz, Herron and Judge were spearheading a Canterbury Mountaineering Club expedition that was focused on making the first ascent of the Patagonian peak Torre Egger. Progress was painfully slow as the team battled the atrocious weather that characterises that part of South America. The death of Phill Herron down a crevasse early in the New Year of 1976 extinguished any lasting enthusiasm. Herron’s accident briefly cast Denz out into the climber’s wasteland: he had months of barely touching his gear as he struggled to come to terms with the loss of his best friend whom he and Judge had fondly nicknamed ‘the Kamikaze Kid’. Finally, after two further summers of less intense, but equally rewarding free-climbing in the Darrans, Denz decided that Yosemite’s rock monoliths held the key to his future ambitions and he packed his bags for California.

North America was to prove a compulsively addictive place for Denz and apart from two half-year spells back in New Zealand he was to spend the best part of the last five years of his life based in Santa Cruz and Valdez where he could sample as much big wall rock, waterfall ice and super alpine action as he wished. And he did, leaving his name on previously unclimbed mountains in the Chugach Range and on a huge face in the remote and seriously wild Kichatna Spires. In Yosemite he climbed more than a dozen walls, including early repeats of such landmark routes as Excalibur and Pacific Ocean Wall. He even married briefly so as to enable a Green Card.

But it was at the bottom of South America Denz really got a buzz going. For five long months of 1980 he did battle with Cerro Torre – the Queen of Patagonia. Alone he laid siege against the Compressor Route, fighting against the storms that raged for days on end, yo-yoing up and down the 3102m-high spike till exhaustion and imminent death finally saw common sense prevail. “These attempts are the only time in my climbing career when I have pushed myself to my absolute limit,” he admitted in 1983. “I chipped coffin shaped caves into the blue ice and spent up to six days in them hiding from storms. On several occasions I was forced to bivvy in the open, fighting off spindrift avalanches, hypothermia, and frostbite.” Denz’s final effort saw him out on the mountain for nine days with only four days of food. His high point was just 60m beneath the summit.

The following year Denz started the Himalayan phase of his climbing – he liked to work in phases – with a spectacular four day solo traverse over the unclimbed high peak Kusum Kanguru (6369m). Two seasons later he was back in Nepal to make an illegal climb into Tibet and attempt the virgin Menlungtse (7109m). He became the first mountaineer to set foot on the mountain but illness, lack of food and unfavourable odds saw him only reach the lower slopes.

Makalu was the start of a high altitude run on the world’s biggest mountains with Peter Hillary, culminating in the end of this most dangerous stage of his climbing. Beyond that he saw himself retiring to New Zealand, working as a mountain guide and rock climbing. But a little avalanche at 6400m stopped all that and in doing so took the life of one of New Zealand’s most remarkable mountaineers.

Bill Denz’s attitude, determination, courage and vision helped to create a whole new higher benchmark for all to follow.

– Maxim’s book about Denz, Bold Beyond Belief, will be reviewed in the May issue.