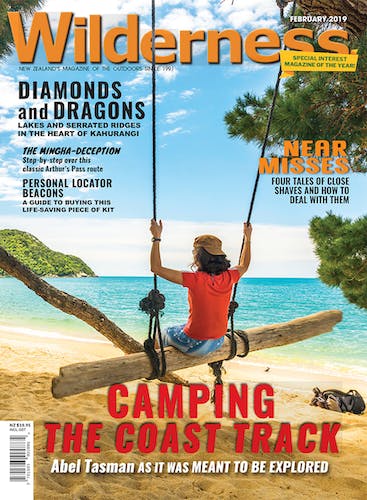 Read more from the
February 2019 Issue

Read more from the
February 2019 Issue

Veteran multi-sporter and nine-time winner of the Coast to Coast race, Steve Gurney had a sad and sorry end to his professional racing career in 2007 after a severe ankle injury left him out of the racing scene.

Three ankle reconstruction surgeries later, Gurney is back to the race that made him a household name, though not as a competitor but as ambassador supporting participants at the start and finish lines as well as delivering roadshows around New Zealand.

He’s enjoying the slower pace of his new role: “I don’t feel the pressure to race anymore. I used to get this nervousness every time I approached Arthur’s Pass; the Coast to Coast race was anchored to it. But now it’s just fun times.”

For the last five years, Gurney has called Queenstown home. “It’s an adventure playground on my doorstep,” he says.

But what are his top walks in the region? “I could tell you about every rock and river on the Goat Pass route if you like,” he jokes, noting that he’s done that route several hundred times in training for the Coast to Coast.

“I used to get this nervousness every time
I approached Arthur’s Pass;
the Coast to Coast race was
anchored to it.
But now it’s just fun times.”

One of the most iconic walks in New Zealand, Gurney’s preferred method is to fast hike this 33km track in one day.

“It’s a tourist highway, so I only do it in the off-peak, but it’s the diverse scenery that I love. The beech forests, the waterfalls, the lakes and tarns – this walk has it all.”

Gurney says the only disadvantage of this tramp is the transport issue. “It’s not a loop, so there’s a bit of logistics to work out before you set off.”

Gurney prefers to cut through Steele Creek, between the Caples and Greenstone valleys, on the Steele Creek Track.

It’s a narrow and heavily forested area, interspersed with grassy clearings. “It’s steep and sparsely-marked, so you’re not just following a track here, you do have to think a bit.”

When his time is limited, this walk becomes Gurney’s ‘go-to’.

Only to be done outside of the ski season, from the ski field car park walk past Lake Alta and very quickly you can get to Pt2200, one of the highest peaks in the region.

“If I want to impress a visitor and I’ve only got two hours, this is definitely it,” Gurney says. “From a fitness point of view, it tests my endurance and then the scenery at the top quite literally does take my breath away.”

There is a small amount of rock-climbing (“maybe 5 steps”) to get up there, but Gurney says you don’t need ropes or any rock-climbing gear.