All it took was two hikers, a night on the turps and a roasty-toasty fire that wasn’t properly extinguished to lose a century-old farmhouse in Skippers Canyon last January.

The former Mount Aurum Station homestead was reportedly burned to the ground by fire in the wee hours of New Year’s Day.

It was said the couple responsible fled the scene embarrassed, but later owned-up to police saying the fire simply got away on them.

Firefighters arrived and had the fire out by 4am.

DOC heritage ranger Jim Croawell was responsible for the cleanup.

“It was a terrible loss,” he says. “That old place was special to a lot of people, including the families connected to its history as the oldest remaining farmhouse of the Shotover area.

“For me, personally, it was sad to see it go. I was bloody pleased no one was hurt. But I’d just finished painting it with a group of hard-working volunteers. A hell of a lot of time and effort went into that building over the years.”

The effort started in 1989 when DOC staff and volunteers, led by now-retired ranger Stew Hardie, replaced weatherboards and painted and cleared vegetation from the Category 2 heritage-listed homestead and surrounding buildings.

Back then, the old homestead was run-down and derelict, but salvageable. Now all that’s left is talk of erecting a commemorative plaque.

That’s how it goes sometimes, says Croawell, who’s clocked up nearly a decade looking after some of Otago’s most historically-important backcountry huts.

“You can’t sweat these things,” he says. “If it’s not people, it’s the wind or the snow and cold. These old huts and artefacts are in some really isolated places and just seem to hang on by a fingernail.”

Today, DOC manages the largest heritage portfolio in the country.

As heritage ranger, Croawell does his bit by looking after around 45 buildings in Wakatipu, Arrowtown, Cromwell and Kingston.

The goal, he says, is to keep them accessible to the public and in an authentic state by using original materials and building techniques to repair them.

Visitors to the dog-friendly, 9100ha reserve stay in the DOC campground or take the three-hour hike from Skippers Point to Dynamo Hut – one of Croawell’s favourite heritage huts.

“You can’t sweat these things. If it’s not people, it’s the wind or
the snow and cold. These old huts and artefacts just seem to hang on by a fingernail.”

This summer is expected to be another bumper season.

Croawell keeps a mental map of the sites in his area, attending to each one as and when it needs work.

He’s a carpenter and will often drive and hike to a location to make a handful of minor repairs over the course of a day.

When the job’s big or complicated, he’ll rope in a team of volunteers or chopper in a Heritage New Zealand expert or an engineer for advice.

In Skippers Canyon, it’s the gold fever era of the 1860s that lives on in the historic schoolhouse, nearby cemetery, tailings area and 117-year-old suspension bridge.

In Macetown, up the road near Arrowtown, it’s a similar story.

This summer, Croawell plans to fly to Dynamo Hut and use a small digger to move the long drop to a more suitable position approved by archaeologists.

While he’s there, he’ll use the digger to push soil free from the hut’s base “to keep its feet dry”.

There’s ongoing work to do at Skipper’s historic schoolhouse and a couple of clapped-out window frames and flashings to replace at Ballarat Hut, a three-bunk hut in Flood Burn. 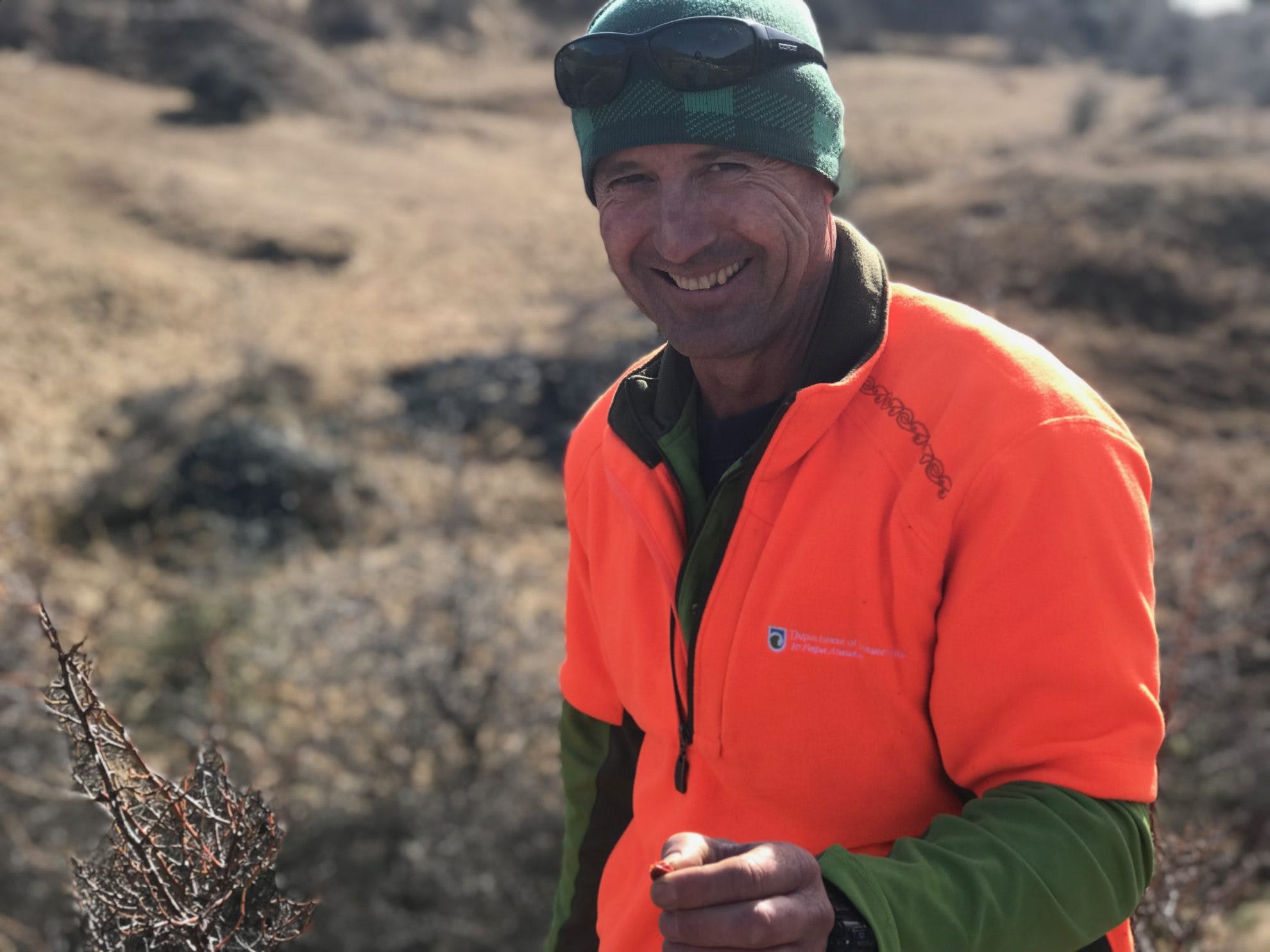 If there’s enough time and money, Croawell will assess the state of Archie’s Hut and clear debris from a gold stamper half buried by floods over winter.

At Macetown, a historic settlement about 15km upriver from Arrowtown, preservation of the four-storey-high Homeward Bound stamper battery will continue.

Recently, Croawell and a volunteer team stabilised the land surrounding the battery and constructed an iron roof to protect the relic against Otago’s harsh winters.
Croawell, who grew up on the west coast beaches of Auckland and identifies as a “fifth generation bushman”, is pleased with the results.

“You look at these old structures and it’s hard not to be impressed by how tough it would’ve been to run a business out here, let alone to work and live here without today’s creature comforts. Intact and restored, they definitely help tell the story.”

Ask Croawell where he’d go over summer if he wasn’t flat out working and he is quick to recommend the Whakaari Conservation Area at the head of Lake Wakatipu.

About two kilometres south of Glenorchy and accessible from the Glenorchy-Queenstown Road, it’s an area packed with historic huts trampers can overnight in, as well as plenty of mining relics and stunning mountain views.

“Probably one of my favourite walks is the eight-hour loop track to Mt McIntosh,” he says.

From The Junction (about 90 minutes on from the car park) trampers follow a marked track, which drops steeply to the Buckler Burn.

A steady climb on the old mining road leads to McIntyre Hut, a five-bunker. A further 90 minutes on and you’re at McIntosh Hut, a four-bunker.

Finally, a steep climb along the ridge provides the big reward: extensive views of Lake Wakatipu, Mt Earnslaw/Pikirakatahi and the Dart Valley.

“Take my advice. Don’t rush,” says Croawell. “Give yourself two to three days to look at everything and really take in the area. It’s worth it.”

And if you see anything that needs fixing, get in touch, he says: “It honestly doesn’t matter how big or small – a missing latch or vandalism. Ideas about what could be improved are welcome, too. I can’t be everywhere and it’s great to know what’s going on from people who love the area as much as I do.”