Hidden within the South Island sections of the Te Araroa Trail are some stunning river valleys and alpine tracks that allow dogs, discovers Sarah Fyfe

The 110km section of the Te Araroa Trail that runs beside the Pelorus River, over the Richmond Range to St Arnaud is special to me.

I have twice been able to walk my dog Pippin over this track and with landscapes that run from lush river valleys to rugged alpine grasslands and end in the geologically fascinating Red Hills, that is something special.

Pip is a small, white, furry thing of indeterminate breed, a true bitser.

Weighing just 5kg, most people struggle to believe this piece of fluff could ever scale the mountains she loves, let alone carry her dinner on her back.

I picked Pippin the pup up from the Sunday Market and a new horizon appeared: my new hiking buddy. Tramping with a dog is a truly symbiotic experience. Pip gets to go into wild and smelly places and I get to be entertained by her antics. Experiencing her joy makes downhill struggles on old knees a much less onerous ordeal.

Pippin’s early stomping ground was the Hacket Hut circuit in Mt Richmond Forest Park. She quickly found her feet on the tracks and trails in this easily accessible part of the Richmond Range. Her first overnight tramp was a three-hour walk to Browning Hut. It poured, but we were both in heaven.

Pippin was euphoric when we arrived at the delicious smelling (for her) hut. I tucked her into my thermal sleeping bag liner and made a fire.

In preparing for our tramps, Pippin has undertaken avian aversion training. This teaches dogs to avoid ground-dwelling birds such as kiwi, blue penguins and weka.

DOC organises this, it’s free and available a couple of times a year in conservation areas all over the country. I wanted to deter Pip from bothering the many families of weka whose home is this part of Te Araroa.

Fitted with an electric collar, she was led along a track and exposed to a dead weka. When she sniffed the bird, she was given a small but surprising electric shock. Reinforced with verbal warnings from me, Pip steered clear of other dead birds and nesting materials put in her way. She passed with flying colours. We participate in a refresher course each year, managing now without the electric collar.

Other trampers love meeting Pip on the trail – she seems to alleviate their fatigue and lighten the mood. Ascending 1731m Mt Rintoul recently, we came upon a nervous womanwho was being buffeted by powerful winds on the steep, boulder-strewn ridge. She was panicking and had ‘frozen’.

Instinctively, Pip moved beside the woman, her warm soft body providing comfort and easing her anxiety. Grounded on her four paws, Pip provided steady support as the tramper leaned on her and began to slowly clamber over the alpine rocks. That evening, while sipping our soup at Rintoul Hut, the woman told me how comforted she had been by Pippin’s warmth and the way she had tucked in close to her legs.

While Pip is strong and steady on land, crossing swollen rivers can be a challenge. Being so light, she flounders in swift currents and her wet coat is like a heavy woollen jersey, dragging her down.

The first few days we spent on the Pelorus Track went without a hitch. Walking on a well-formed track on the true left of the river, we breathed in the pure beauty of this pristine valley.

While there are excellent swimming holes all along the river, we first walked this section in August and were both grateful to arrive at Captain Creek Hut dry-footed. From there, two solid suspension bridges lead over the Pelorus and on to Middy Creek Hut. We climbed up to the fabulous Rocks Hut and then down to Browning Hut, where our river crossing adventures began in earnest. 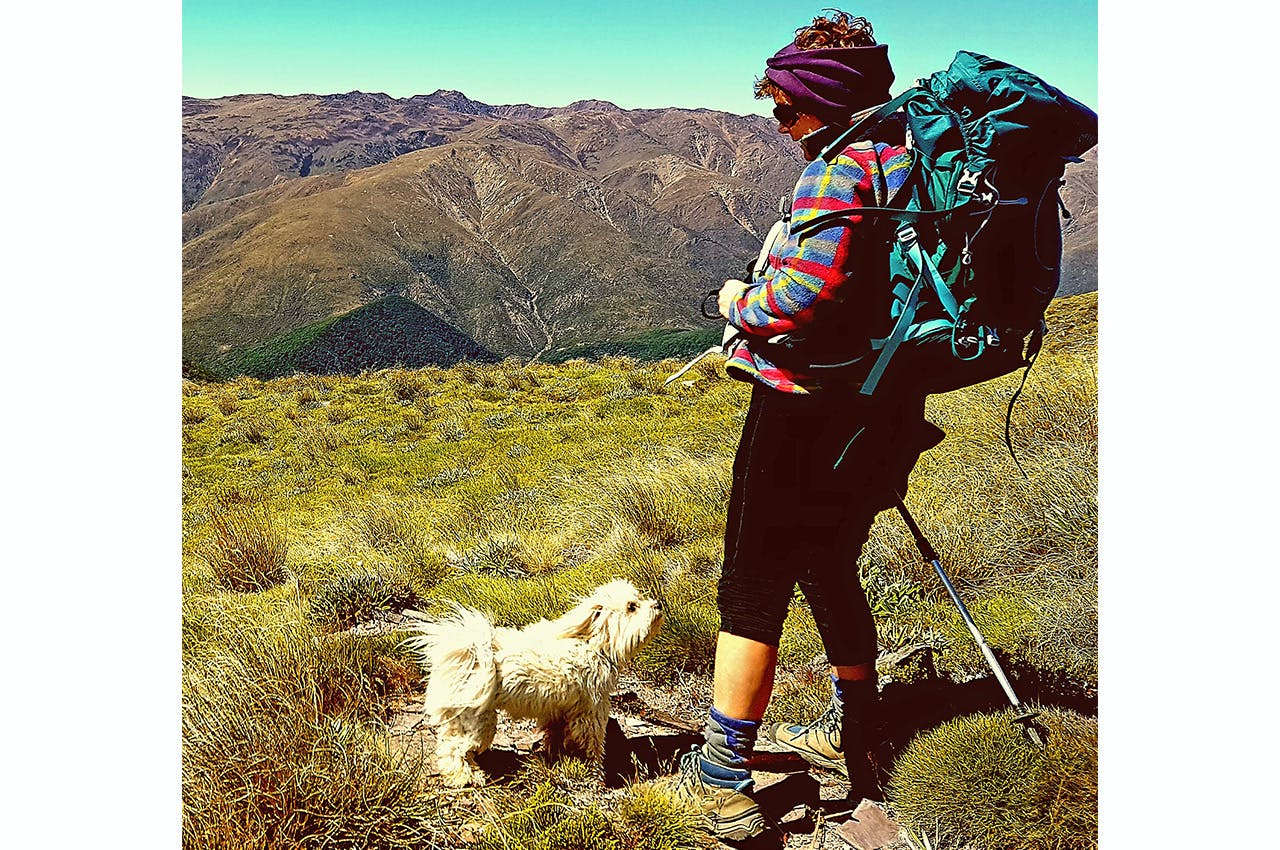 Sarah and Pippin enjoy tramping together

In wet weather, the Browning rises rapidly and without bridges, I knew Pip could get swept away. Dropping my pack and sternly instructing Pippin to stay, I slowly forded the thigh-deep river. Confident it was possible, I returned for Pip, who knew instinctively to snuggle in close. Finally, I returned for my pack. It sounds clumsy but travelling solo I had little choice.

Reaching the Hacket Hut junction, a sign warned of the multiple river crossings ahead and the potential danger these can create. Sodden and a bit shaky, we elected to rest up and wait for the water to recede. I was relieved we did as the next day we crossed Hacket Creek eight times. Despite my fears, the river had dropped and we had fun rock-hopping along this pretty, moss-clad valley before climbing to Starveall Hut.

The alpine tops of the Richmond Ranges are my favourite section of this route. The grand view from Starveall Hut encompasses Tasman and Golden Bay, reaching as far as Farewell Spit. The stunted lichen-cloaked beech forest always feels enchanted. Pippin and I have played on this stretch in all seasons, escaping the heat in the height of summer and revelling in the glistening snow in the depths of winter. We have heard the autumn mist whispering through the mountain beech and the wind singing on a gusty spring day. Always, I feel that Pip and I have stumbled on heaven.

Curling past Hunters Hut, the headwaters of the Motueka River entail further doggy-dodgy river crossings. This time, I decided I was steadier with my pack on and with Pip tucked in tightly.

Our last gnarly river crossing occurred on our final day, just before the climb through the Martian-like landscape to Red Hills Hut. With a lighter pack now and stronger legs, this time it was no problem carrying my cuddly companion to dry shores.

Food for Pip is an ongoing consideration. In cooler weather, she sports a Swanndri jacket that has large oil skin pockets on each side for her dry biscuits and a couple of tins of sardines. Unlike me, Pip doesn’t eat much when we tramp. I have learnt to feed her up before we go on a multi-day outing and trust her judgement. She sometimes eats sardines, but what a curse to open a tin and watch her merely sniff it and turn away. Wasting precious water on cleaning the tin, I can never really eliminate the oily fishy smell and the empty tins stink out my pack for the remainder of the trip.

Next on our agenda is the St James section of Te Araroa, where dogs are allowed on the eastern side of the Waiau River. Other dog-friendly places we are yet to explore include the tramping tracks around Lake Ohau.

We have some fun times ahead.