“It’s been great overall with a few tough days in between,” Bettina Grotschel said just as she was about to start the Whanganui River Journey. After 1146km on the trail, she summed it up with this: “This country and its people are amazing.”

After an easy-going Ninety Mile Beach she experienced the mud of Herekino and Raetea forests. But Grotschel found a positive among the muck: “ I was enchanted by the beauty of the trees, ferns, plants and the melodies of the birds,” she said.

She said a common joke among TA walkers she encountered was: ‘This is so muddy it must be the trail!’.

Grotschel used her time in Auckland to resupply with new footwear and socks, and reflected that she felt much more confident after a few weeks on the trail.

She said she’s been impressed by Kiwi hospitality: Never would I have thought before to be invited by complete strangers into their houses, woolsheds, spare rooms and being invited for dinner, breakfast or a wash of my clothes. I feel so much gratitude as often this hospitality came just when I needed it most, after a particularly challenging hike or when I was soaking wet and cold.”

We caught up with Maria and David by email as they were on the road, near Kerikeri.

“The first four days were packed with beautiful impressions about the beach and the sea, the beautiful flowers in the dunes and a couple of good wave beatings along the way,” Maria wrote, adding that they had their fair share of headaches.

She had packed some incorrect tent cords, “resulting in jumping around half naked in a stormy and rainy pitch-dark night, trying to keep our tent from blowing away.” She says they also battled the sand, which they found in every crevice of their gear.

“Another fun experience was finding ourselves chest-high in seawater because we missed low tide,” Maria said. “We thought every time the waves went out, we would make a dash for it before they came back in and hit us. Sometimes we found ourselves crawling up the dunes while the waves tried grabbing us.”

After Ninety Mile Beach, the trail led through Herekino Forest, where they enjoyed the native flora and fauna and birds they’ve never seen before. “It’s why we came here,” she said.

In Raetea Forest, they were, “a little tired and full of mud with lots more mud to come, more than other trails have ever offered us,” she said. 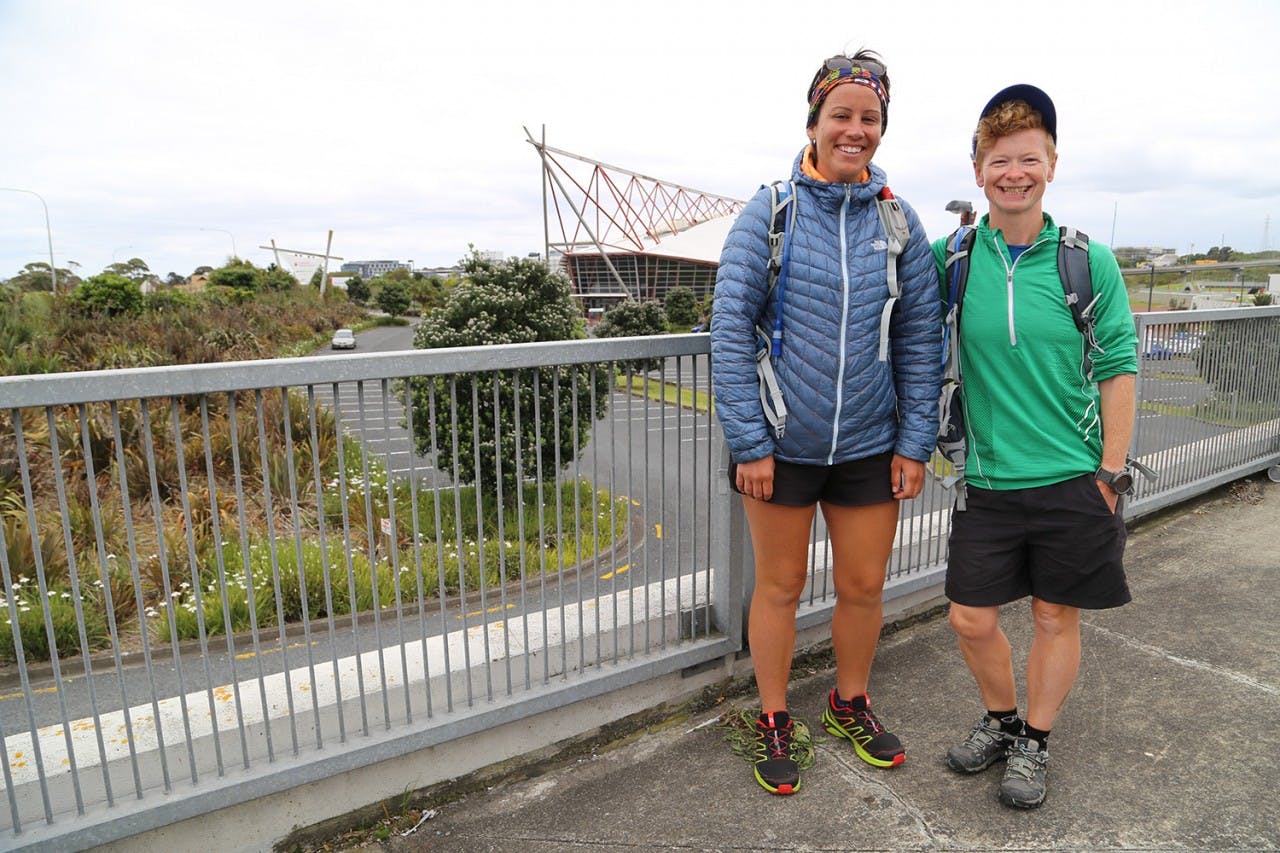 Michelle and Jack say the TA is ‘a really lovely level of simplicity’. Photo: Meghan Walker

When Wilderness caught up with Te Araroa Trail thru-hikers Michelle Campbell and Jack Faulkner, they were 30 days into their 3000km, five-month journey.

“It’s 100 times harder than I thought it would be,” Campbell said.

“People have no idea,” Faulkner said. “You just can’t comprehend this craziness. It’s just so hard. But you get used to it.”

Sitting outside a cafe in Manukau, Campbell and Faulkner had spent the previous few days walking through Auckland, trading muddy trails and nikau palms for sidewalks and traffic lights. While in the city, they’d been spending their nights with Campbell’s mum. It’s a necessary evil to walk through New Zealand’s busiest city if you want to stay true to the trail.

The couple’s walk through Northland was a mixture of highs and lows: from endless muddy tracks and challenging terrain in Raetea Forest to beautiful beaches and humpback whale sightings at Smuggler’s Cove in Bream Bay.

“About 12 to 13 hours of mud up to here,” Faulkner said, pointing to her knees. “Just constant mud. You’re in it all day, and then you camp in it.”

Campbell said Ninety Mile Beach and Raetea were a harsh introduction to the trail.

“Four days of crazy sand-blasting beach,” Faulkner said, “straight into these intense forest sections. I was thinking, ‘my god, I hope this gets better, because this is hard.”

Mud, headache-inducing logistics and sore feet aside, they’re both visibly happy and relaxed.

“All I have to do is get up and walk every day – it’s a really lovely level of simplicity,” Campbell said.