After two people died on a popular alpine day walk in Fiordland, DOC is grappling with how to make the route safer.

The car park for the Gertrude Saddle Track, just before Homer Tunnel, is regularly overflowing in summer, as people head to what’s been described as the best alpine view in the country.

The four to six hour return walk provides one of the few accessible pathways into the upper reaches of the Darran Mountains, an arterial range of the Main Divide. Boosted by rave online reviews, the track, once only frequented by experienced trampers, is attracting hordes of people, many unaware and unprepared for the risks of the mountains.

“It’s an amazing place – one of the most beautiful in the world – but it’s tricky country,” Dunedin rock climbing instructor Dave Brash says.

“Last summer I came across two people coming down with babies in backpacks. That’s what’s happening now. It’s becoming a bit like the Tongariro Alpine Crossing, but it’s potentially more serious. If you took a slip in the wrong place, you’d fall a long way.”

In 2016, a 31-year-old Israeli died after falling near the track, and in January this year a French national named Anne-Marie Scaglione-Genet also died after falling in a similar area. A coroner’s report hasn’t yet been released for either case, but those familiar with the accidents say they occurred when the hikers missed a key turn-off on the track (see sidebar).

The trail has been regarded as an expert route and until March this year had no markings above the valley floor –  only rock cairns to mark the way.

A report into the 2016 fatality recommended installing markers to prevent people getting lost. Tragically, DOC had planned to install the markers in December, before Scaglione-Genet’s death, but it had been unable to complete the work due to avalanche risk.

“It was very hard on field rangers [the fatalities], but we can’t react to everything that’s going on,” DOC Te Anau operations manager Greg Lind says. “Do you put staircases up to the top of Aoraki/Mt Cook? There’s no way we can make places completely safe.” 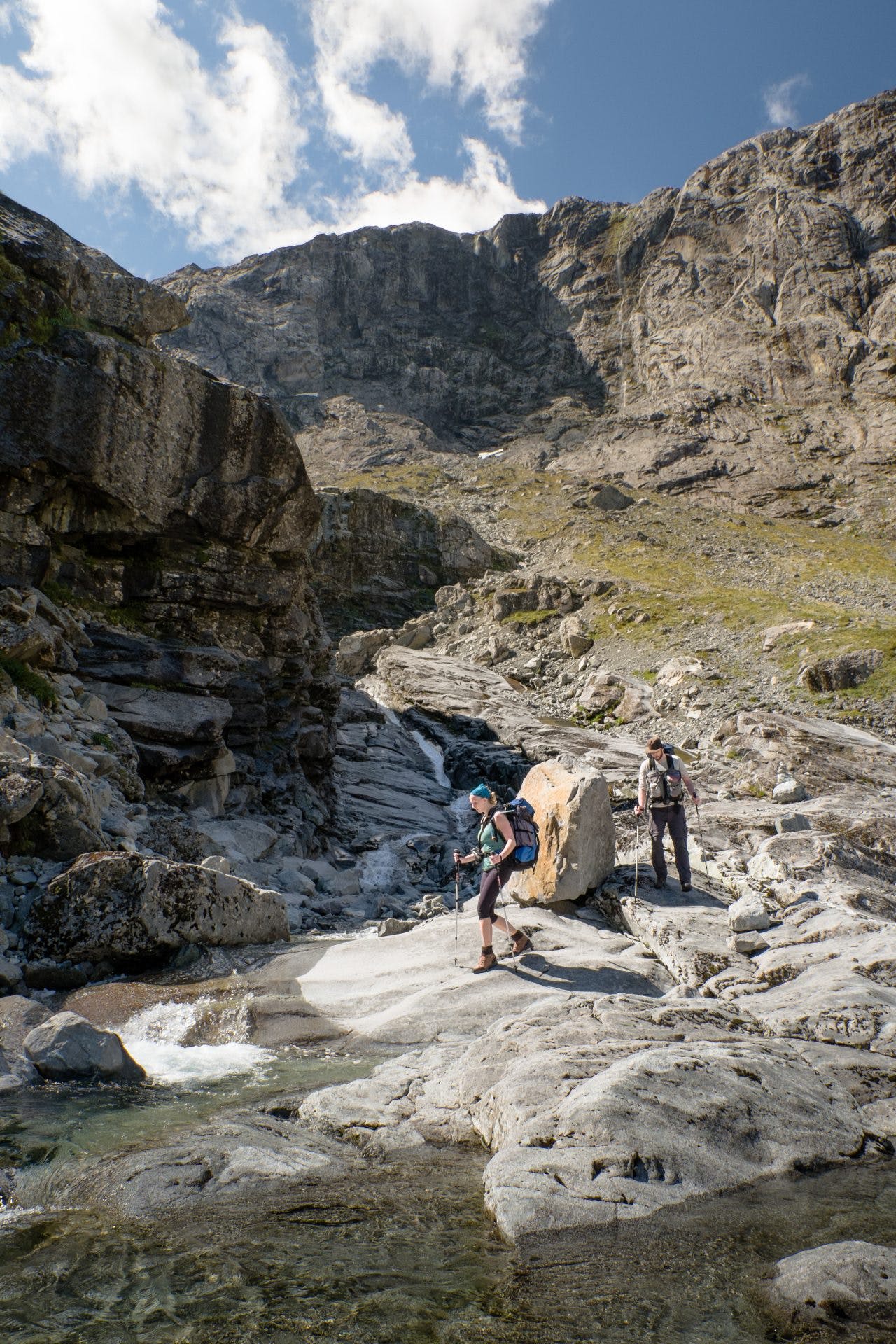 Track markers were put in place in March and, because they have been wiped out by avalanches, will be reinstalled once the snow thaws.

“We’ve done all we can ahead of the coroner’s finding,” Lind says.

DOC has also installed signs warning that multiple fatalities have occurred on the route and details multiple hazards.

Peter Tribe fell while descending from Gertrude Saddle and broke his leg five years ago. Cairns marking the route had been washed away and the stream the track crosses was also in flood, so Tribe and his wife Katherine headed up the wrong route. After running into challenging terrain, the couple decided to head back. Tribe slipped on moss in a steep section and fell several metres, breaking his leg in two places.

Katherine ran back to the car park and called for help. It was four hours before a helicopter could fly Tribe to Invercargill Hospital, as the weather closed in.

He has since made a full recovery and walked to the saddle a year and a half later.

“It was great to get to the top and see the view,” Tribe says. “It’s just amazing, really incredible.”

Katherine says they were used to hiking advanced tramping tracks and were well prepared and accepted the risk involved in enjoying the outdoors.

“Possibly more track marking would have helped, but it’s our responsibility,” she says.

Tribe has since bought a personal locator beacon (PLB) and now carries it with him, even on short walks. 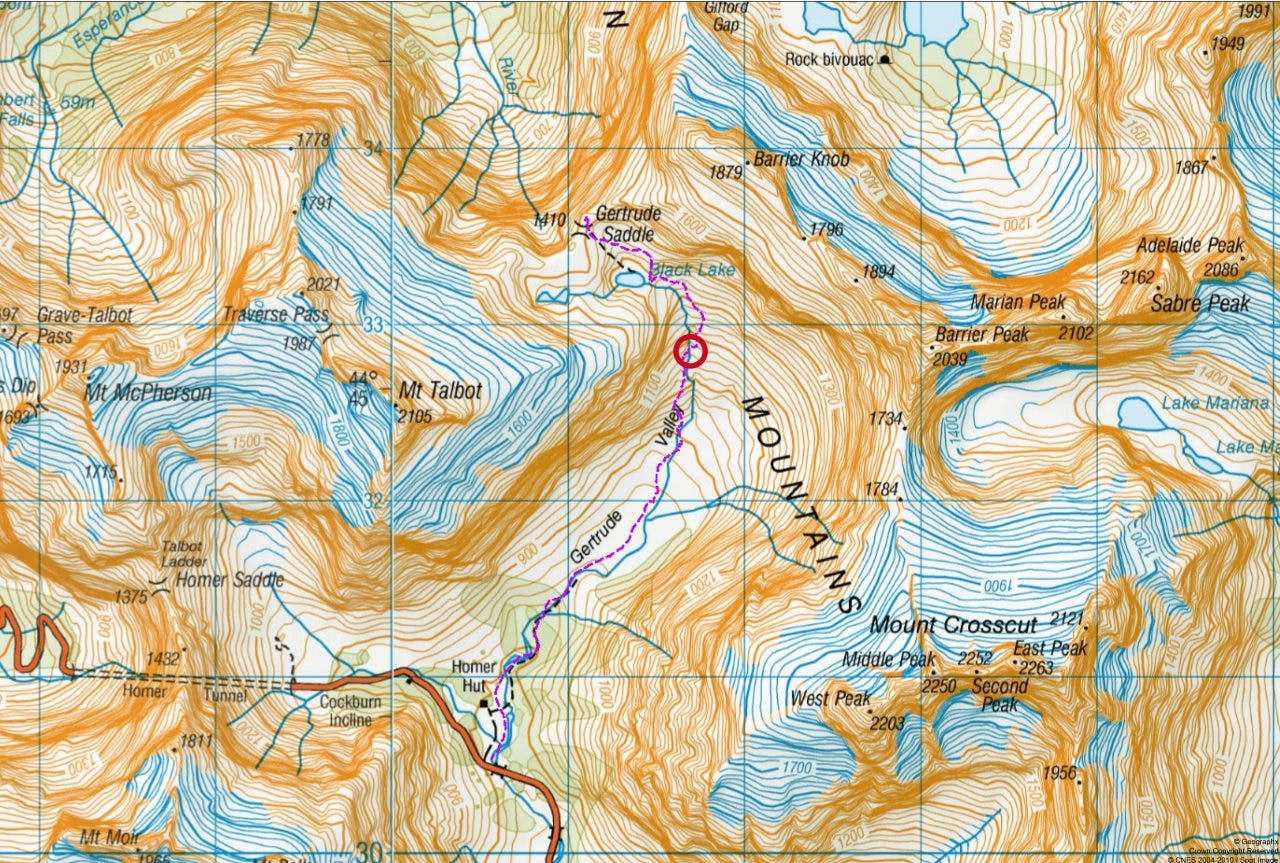 Map showing where the missed crossing is located

Te Anau Search and Rescue volunteer and local GP Dr David Hamilton and DOC’s Greg Lind both say people are missing a crucial turn-off on the Gertrude Saddle Track, and suspect that is behind the two most recent fatalities.

“If people miss that turn it funnels them into a steep, slippery section with large bluffs,” Hamilton says. “Eventually, it comes into a series of waterfalls. One of the fatalities was observed by a partner, and they fell just before that point.”

New markers on the trail should make the turn-off clearer.