Access
Parking off SH25, approximately 7km out of tairua, or at Sailors Grave car park

As we entered the grove of native trees at the beginning of Lynch Stream Track, we were welcomed by the trilling songs of tui and bellbird. It was a spring day perfect for walking; warm and breezy. After some discussion, we had decided to begin the track from the car park off SH25, north of Tairua, in order to enjoy the numerous stairs as a descent at the beginning, and the beautiful beaches as a sensory reward at the end. The path at this end was recently upgraded, creating the Kauri Loop Walk to entice visitors to the area to enjoy an easy amble that showcases some fine trees.

We proceeded beyond the Kauri Loop, where the track became more classic; narrow and poorly maintained, although happily less muddy than usual.

Lynch Stream Track involves countless stream crossings, complete with convenient stepping stones, and is named for Dave Lynch, a bushman who worked the area. The track was established in the 1980s as a Whitianga Lions Club project, and is now under the care of DOC. It winds its way through part of a 4000ha Kiwi Recovery Programme, and is one of the biggest uninterrupted blocks of coastal native bush in the country.

The forests here stand silent testament to the kauri logging of 1874 to 1900. Their behemoth stumps punctuated our journey, now hosting new life, so covered with mosses, lichens and seedlings as to resemble coral-encrusted shipwrecks beneath the green sea of the canopy. There are still magnificent mature kauri to be seen deeper in the bush, alongside rimu, flowering rewarewa, rata and beautiful nikau palms. I spotted a couple of more unusual natives on the forest floor: a New Zealand native orchid, and a carnivorous dewdrop plant of the dosera family. 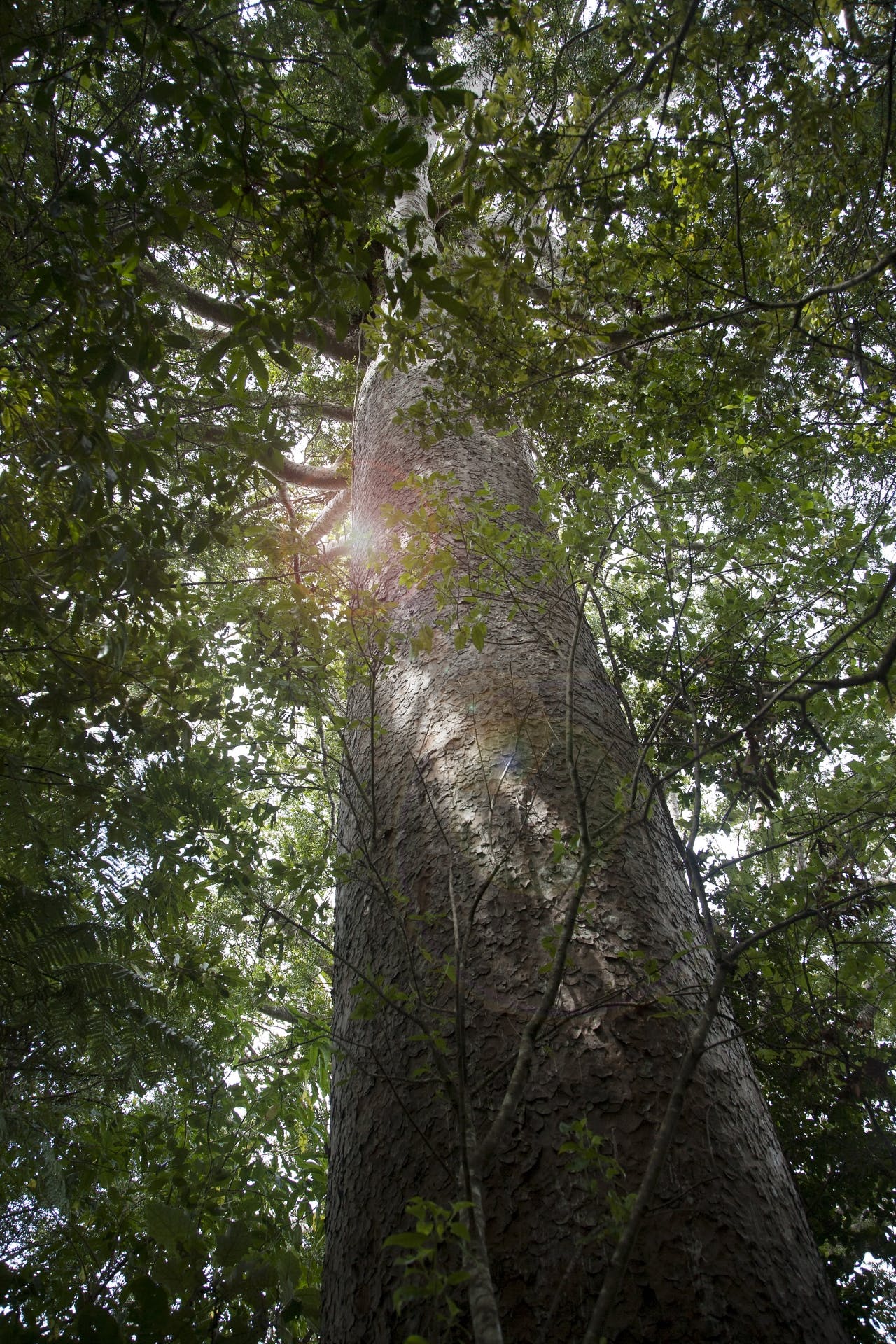 A survivor of the kauri logging days.

We loved being in the bush, soaking up the scent of the shy but fragrant native blossoms, the heat radiating from the sundrenched ground and that distinctive, refreshing fresh water aroma of the streams. By the time we broke through the bush to the coast, we felt like we had been totally immersed in nature.

The bay is a tiny rocky beach and we turned south, crossing Lynch Stream one final time, to climb the headland to reach Otara Bay. Climbing above the canopy, we took in some excellent views of the ocean and islands including Slipper and the distant Aldermans.

Otara Bay is a beautiful white sand beach and we were tempted to strip down and cool off in the inviting water, but we settled with taking our shoes off and paddling the length of the beach.

The final leg of the journey is either a climb over one more headland, or at low tide a scramble around it, encountering rock pools and their inhabitants, finishing at Te Karo Bay, commonly known as Sailors Grave. A plaque at the grave reads: ‘William Simpson, aged 22 years, seaman belonging to HMS Tortoise, who was drowned in the surf opposite this spot, on the 6th of May 1842.’

Our legs were pleasantly tired and now our journey was over – we had left a car at each end of the trail.

Lynch Stream Track is an excellent walk in an interesting part of the country. I know it well and cannot recommend it highly enough.