The problem with spring tramping – in the south, at least – is snow. Personally, I like to avoid plodding through it, camping on it, or being somewhere where it might slide down a hill and hit me.

So we looked for a bush track with a nice hut and no avalanche risk, and preferably somewhere we hadn’t been to.  Eventually, we zeroed in on Makarora Hut, in the headwaters of the Makarora River near Haast Pass/Tioripatea.

After a comfortable night by the Haast Highway, we awoke to find that the forecast rain, which was easing off, had fallen as snow up higher. Just 20 minutes from the road, Stewart Creek needed to be crossed below Stewart Falls. The map showed a big catchment with a small exit, which suggested a potential problem. However, although over knee deep, it proved to be a straightforward crossing. 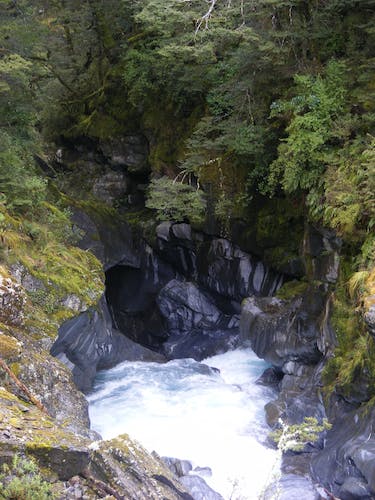 Next we had to tackle the major hill of the trip. As with many hanging valleys, travelling upstream involved climbing steeply till well above a gorge and then, according to the map, descending gradually until easier ground was reached. A doddle, we thought. Two hundred metres took us into a trough, which we ascended to a point perhaps 150m above the gorge.

After a short descending sidle, we had to slither down an old slip. Here. One of our party discovered that cheap trekking poles bought online are not up to this sort of terrain when one of his collapsed under its load, and was joined by its mate within the hour.

More sidling ensued, with the occasional counter-intuitive ascent and another fiddly descent with a poor run out. Two hours from the road saw us close to the river for the first time, at a point where it appeared to disappear into an abyss. We thought we’d cracked it at this point, but the gorge wasn’t quite finished with us yet. There were a couple of places where big climbs were needed, inevitably followed by losing all that hard-won altitude. One side stream required caution, as it had to be crossed on a slippery down-sloping slab just above a waterfall.

We reached the flats just after 2pm and forty five minutes, and two (avoidable) river crossings, later we were enjoying sunshine at Makarora Hut. It’s an ex-forest service four bunker, built in 1960 at a cost of £369.19.7. How do I know trivia like this? Because on the walls there’s a copy of an old file card detailing the costs, construction and location. The hut has had a makeover since then, with a pot belly stove, plywood linings and possibly insulation added. The hut book was 10 years old but only half full and recorded 76 bed-nights in the last year. We were the first people there in five months.

A stroll up the valley revealed Mt Brewster trying to emerge from clouds and I got a glimpse of David Glacier clinging to the southern side of Mt Armstrong. 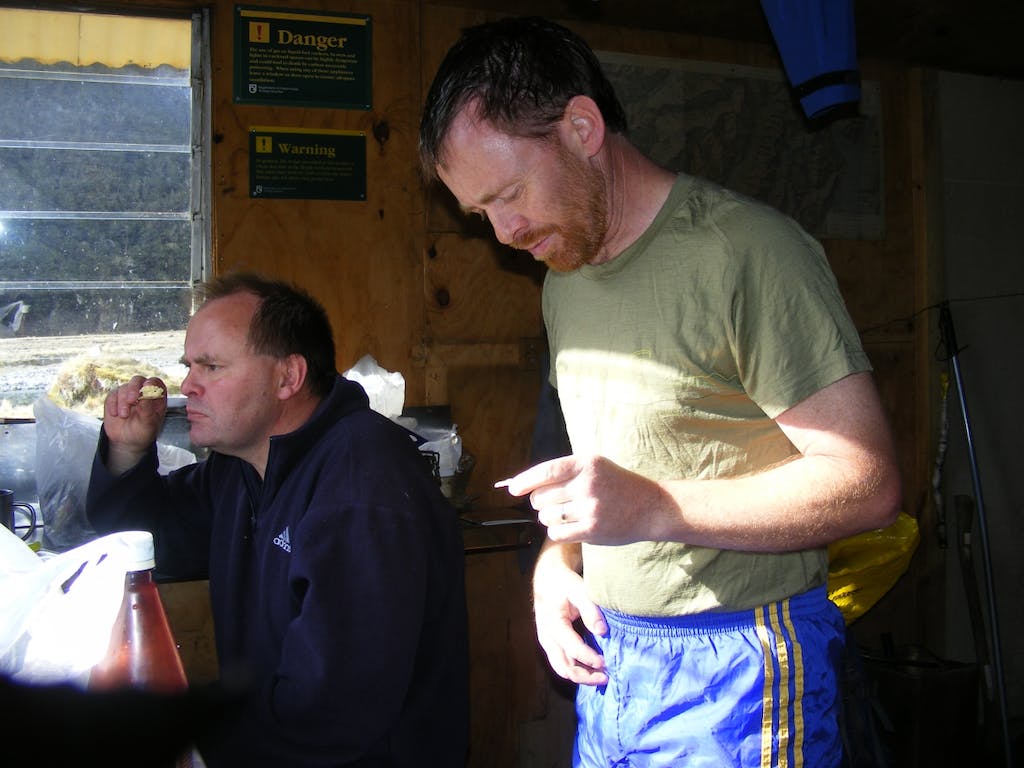 Back at the hut, a sumptuous meal was followed by a couple of drams, and the temperature dropped enough for us to light a fire.

At 4:30am there was sudden and violent change in the weather. When we eventually surfaced, the occasional break in the clouds revealed more fresh snow on the tops. It was a bleak trip down the flats, with parkas fully shut down and balaclavas and mittens essential. In the gorge, most of the gnarly bits seemed simpler in reverse. I was particularly pleased to see that the slippery-bottomed creek hadn’t risen much, and that foot placements and hand holds were better in this direction.

As we slid back towards Stewart Creek, the rain started to ease and it had stopped by the time we reached the road.