With the Waitakere Ranges and parts of the Hunua Ranges closing soon to prevent the spread of kauri dieback disease, Aucklanders could be forgiven for thinking they’ve run out of walking options. But these eight walks are a reminder that the region is still spoilt for choice.

Featuring a campsite on an isolated beach in a regional park within an hour of Auckland CBD, Te Muri Beach is an excellent, but little-known getaway.

The campsite is between Wenderholm and Mahurangi West regional parks. Te Muri Beach is only accessible around low tide and there is no vehicle access, which means the beach is often deserted.

Ten-minutes from the car park, the trail crosses a small tidal stream which is knee-high at low tide, but overhead height at high tide, with strong currents. Continue along the beach, or follow the grassy track just above the beach. The campsite is on the waterfront at the southern end, with room for 80 people, running water and toilets.

From the campground, a trail leads to the top of the ridge to the south, which has views to Wenderholm, Motuora Island and Whangaparaoa Peninsula. There’s also a walk up a gravel road behind the beach, which is closed to traffic and passes large stands of kauri forest and has incredible views of the Mahurangi coast, lush farmland and regenerating forest.

There is also a historic cemetery at the north end of the bay, just back from the beach, where Maori residents and European pioneers are buried. 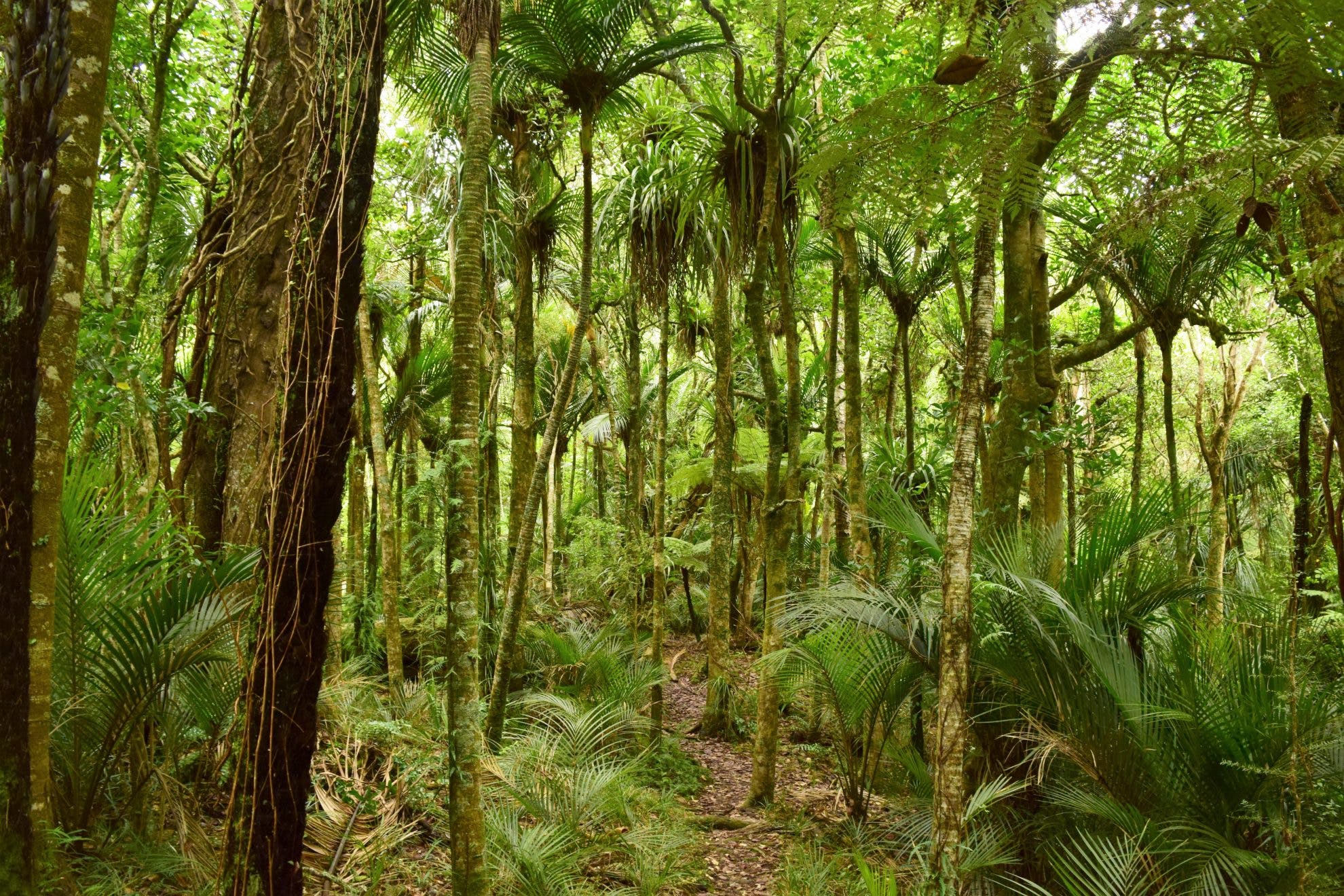 2. Watchtower on the Kaipara

Stretching nearly 100km from Helensville to Dargaville, the sheer scale of the Kaipara Harbour is overwhelming. One of the best vantage points to view this vast body of water is from Mt Auckland, halfway up the harbour, between Helensville and Wellsford.

There is a viewing platform atop the 305m hill, where you can look straight out to the harbour entrance and to the Okahukura Peninsula. To the east are the bush-clad banks of the Hoteo River, Great Barrier and Little Barrier islands, and the Hen and Chicken Islands.

The walkway first heads through farmland, but after about 20 minutes you enter a lush subtropical forest.

The regenerating bush is a distinctive mix. The understory is dominated by nikau palms with regenerating rimu and taraire forming the canopy. But the main feature is the ancient, gnarled puriri trees which punctuate the forest.

The track follows a ridge, climbing gently for about an hour. Close to the summit, it steepens and the remnants of a significant pa site can be seen.

From the summit, retrace steps back to Kaipara Hills Road, or if you have arranged transport, the track continues down to SH16. 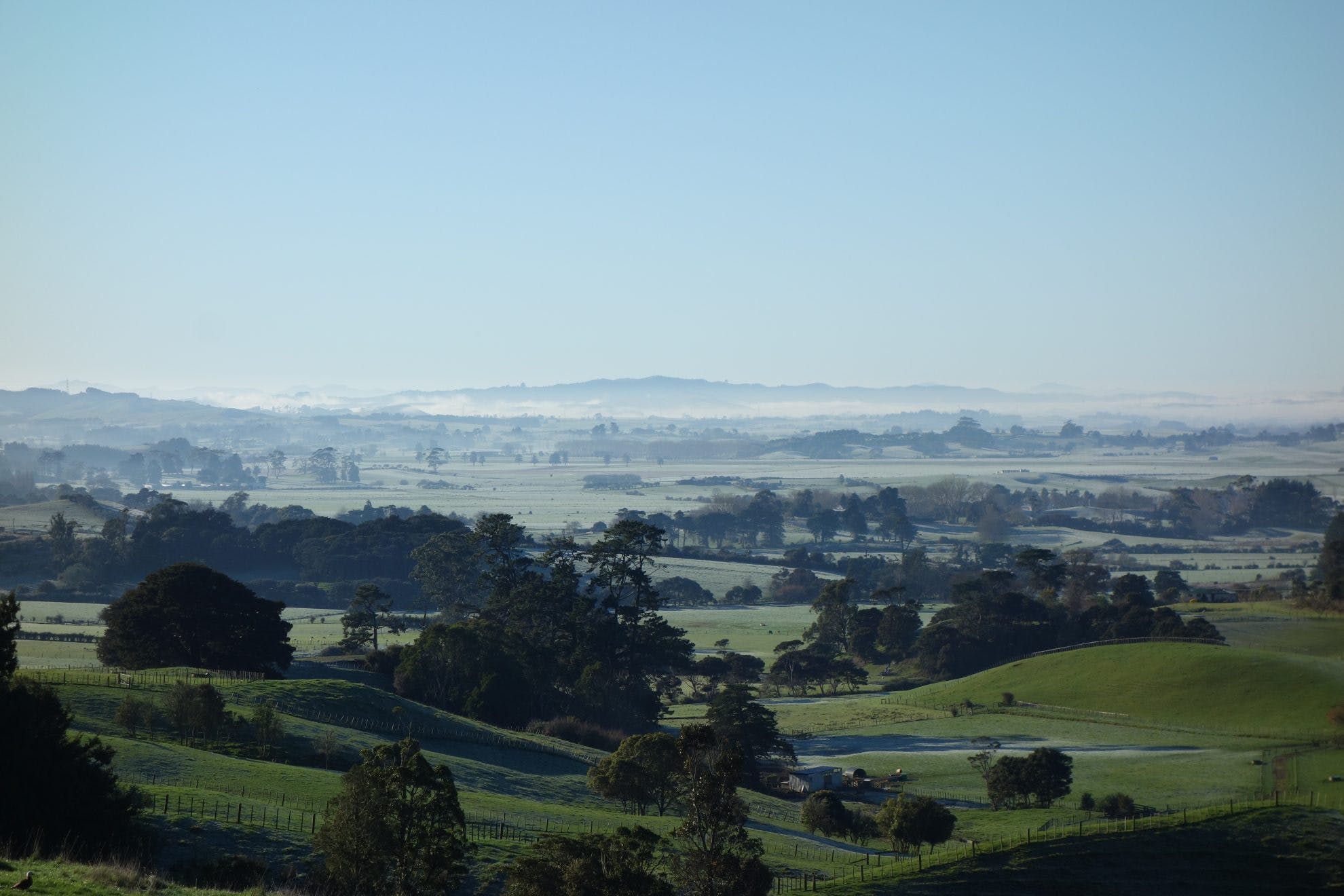 A misty morning view from the the summit of Mt William. Photo: Jonty Crane

3. Beyond the Bombay Hills

The Mt William Walkway offers stunning views from some of the highest vantage points in the Auckland region.

From the McMillan Road end, the track crosses a few fields before entering the native bush of Mt William Scenic Reserve, home to kauri, hard beech and king ferns. The track climbs up steps before emerging at open farmland. It then steepens and becomes considerably more slippery for the final section to the summit.

At 373m, Mt William is higher than both Mt Eden (196m) and Rangitoto (260m). The summit offers 360-degree panoramic views over southern Auckland and the Waikato, including the Kaimai Range, and Pokeno with its huge dairy factory. The expansive views continue on the way down and then back up toward Puketutu (376m).

From the summit, you can continue down to Puketutu Road, or retrace your steps to the McMillan Road end.

The track may be closed due to lambing between August and October. 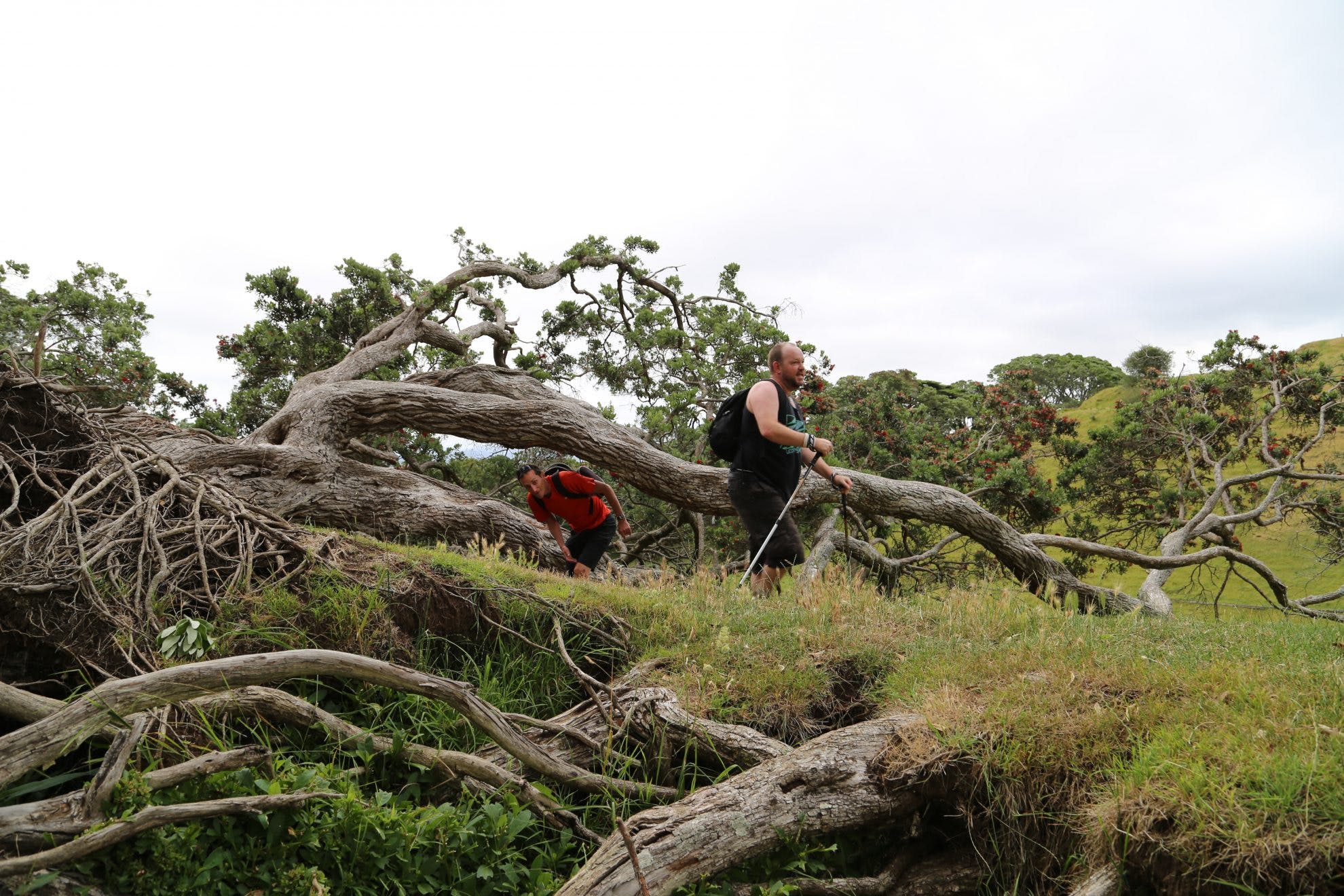 There are wild-ish sections on the superb Coast to Coast Walkway if you look hard enough. Photo: Alistair Hall

Taking in three spectacular parks, One Tree Hill, Mt Eden and the Auckland Domain, and traversing the narrow neck of the North Island, the Auckland Coast to Coast Walkway is the ultimate urban walk.

At 16km, it’s no small fry and involves a fair amount of pavement bashing.

Starting at Onehunga Bay Reserve on the Manukau Harbour, the track heads up steep, villa-lined streets to One Tree Hill Domain and Cornwall Park. Together, these two parks comprise 220ha and the largest section of off-road walking on the route.

More street walking ensues, and then it’s through the grounds of Auckland College of Education to the pinnacle of the tramp: Mt Eden/Maungawhau. At 196m, this is the tallest volcano in Auckland and an absolute tourist magnet.

From Mt Eden, head onto Clive Road, past Auckland Grammar School, over the Southern Motorway (SH1) and onto Park Road which gives access to the wide-open expanse of Auckland Domain. Here the walkway joins the bush-fringed Centennial Walk to Grafton Road. Then it’s onto the city streets to eventually reach the Waitemata Harbour. 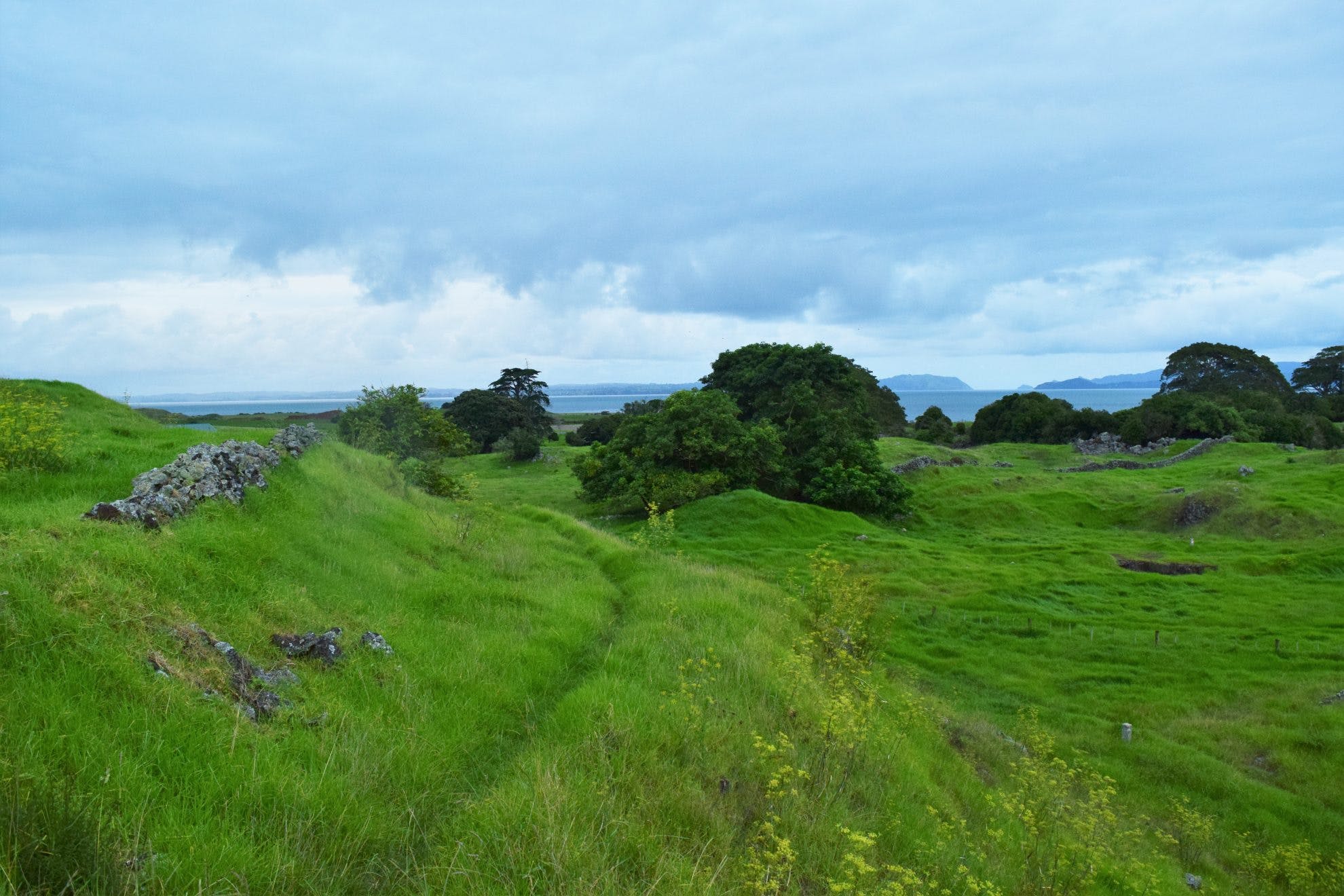 The reserve offers history, nature, views, and even an avocado orchard at Otuataua. Photo: George Driver

5. An ancient view of Auckland

Just beyond Auckland Airport and past its colossal warehouse district is one of the most incredible parks in the city.

Originally there were 8000ha of volcanic stonefields in Auckland which were extensively cultivated. The 100ha reserve was established in 2001 to protect one of the last remaining examples.

The area is believed to have been settled for about 750 years and there are remnants of large-scale earthworks, including garden walls, storage pits, terraces, and building foundations. The walls helped trap heat in the black stones, enabling tropical crops such as kumara, taro, yams and gourds to grow and the growing season could also be extended by up to a month.

There are three walks in the reserve, each taking about 30 minutes: a historical walk, which shows the remnants of the Maori settlement, a botanical walk through a forest, and a geological walk, which explores three remnant volcanoes. 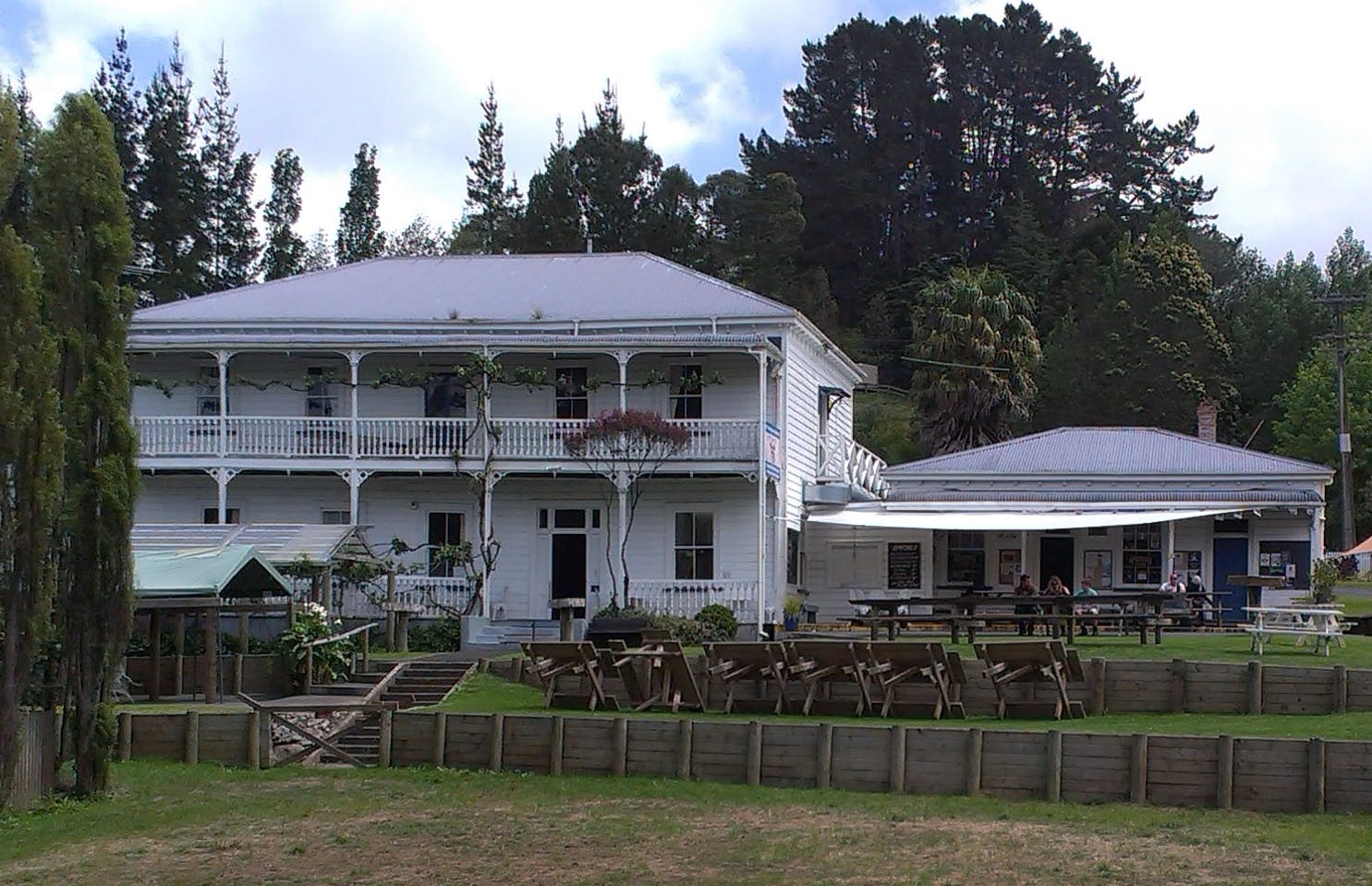 One of the latest additions to the Te Araroa Trail, the Puhoi Track leads through native bush and alongside the Puhoi River, finishing at the quaint Puhoi village where a pub lunch awaits.

From the Puhoi end, the there-and-back track climbs through bush and grassland, revealing excellent views of the Puhoi valley.

Another stretch of native bush gives way to the second section of pines and occasional views down the valley towards the cheese factory.

A swingbridge crosses the Puhoi River, after which you find yourselves at the northern end of the track at Remiger Road. If you haven’t arranged transport back to Puhoi, retrace your steps for that much-anticipated pub lunch. 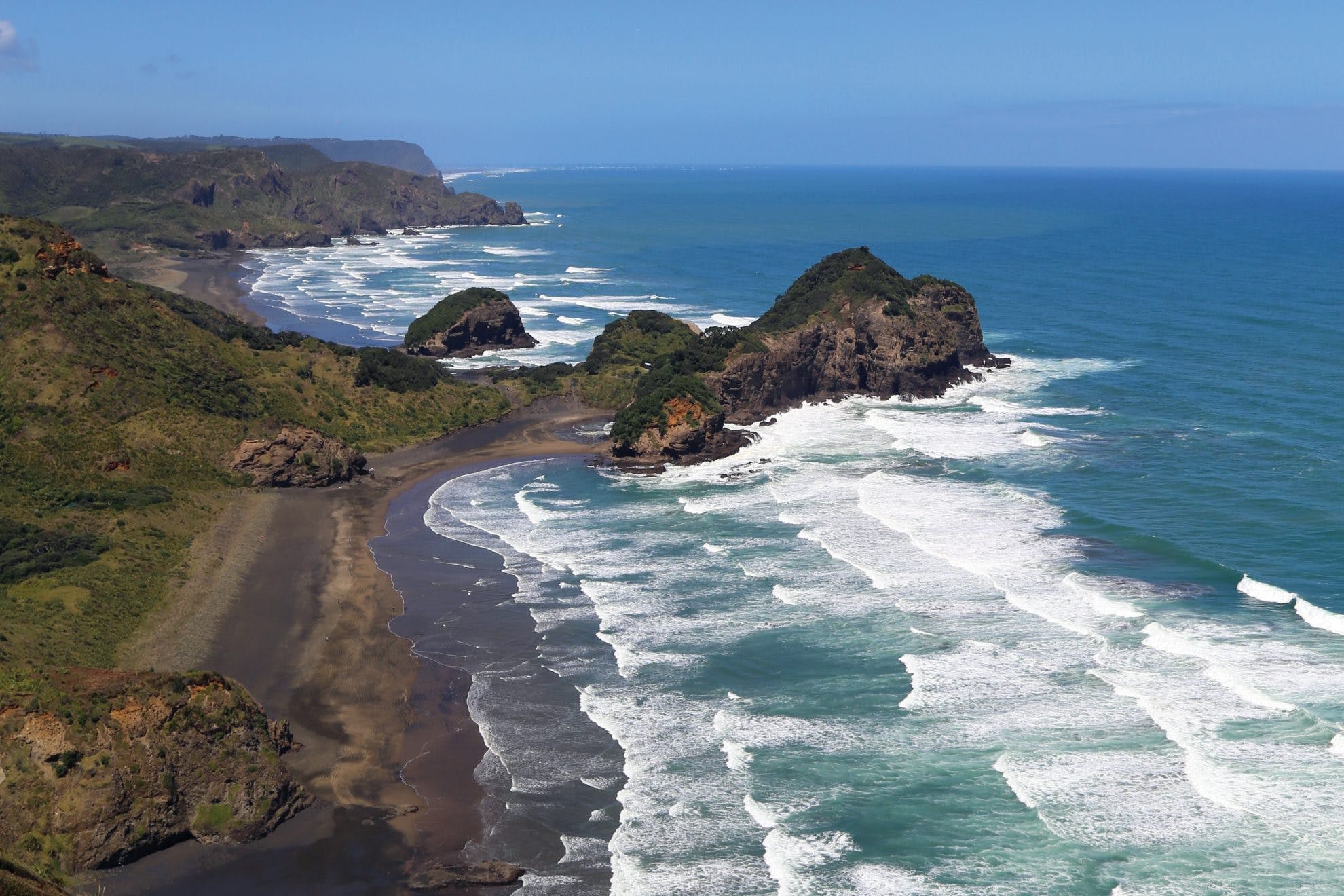 If you want dramatic cliffs, waves smashing into rocks and elevated ocean views then head to Bethells Beach (Te Henga).

Starting from the Bethells Road car park, about 1km before the beach, cross the bridge over the Waitakere River and, after a meadow, start climbing through the head-high bush. It’s not long before you get a full view of Bethells Beach with hills of native forest to the east.

The track drops towards O’Neill Bay and there’s the option to head down to the bay itself. Otherwise, the walkway rises right to the top of the cliff and there’s a spell where you have paddocks on the right and wild coastal views to the left.

There are numerous lookouts where you can see waves pound the cliffs and water gush through arches.

At a track junction, you can head to Constable Rd – the best place for a lunch break or to collect your car.

If you’re returning to Bethells Beach, it is recommended you turn around here as the path heads inland, while overlooking Bartrum Bay.

To vary the experience, try visiting O’Neill Bay. There is little shelter on this walk – sunscreen, hats and plenty of water are essential.