The large and hairy water spider makes its home in riverbeds. Here are three places to see it (or to avoid if you’re an arachnophobe).

Aotearoa is known as a land of wondrous birds, with many of them – like the kakapo and kiwi – peculiar to this country. But perhaps we should be known as the land of invertebrates? New Zealand has far more endemic species of creatures like beetles and spiders.

My daughter, who does not like eight-legged critters, would be horrified to learn that ‘for most of our lives, we are probably never more than a metre away from a spider.’ So says Simon Pollard, writing about native arachnids for the online encyclopaedia, Te Ara. According to Pollard, we have 1100 named species of spider, and possibly two times that number still to be formally described. Perhaps surprisingly for a cold-blooded creature, some native spiders survive among the highest peaks of the Southern Alps.

Biologists recognise two groups of New Zealand spiders: the mygalomorphs and araneomorphs, with by far the majority belonging to the second group. A distinguishing feature of the araneomorphs is the sideways movement of their fangs, giving them a pincer style of striking their prey. Mygalomorphs have to strike downwards.

Trampers commonly encounter spiders in huts and long-drops, or – more unpleasantly – pushing through their webs strung across the track. I remember tramping down from Field Hut late at night, having to wave my walking stick in front of me like an incanting priest, simply to avoid getting my face covered in sticky strands.

The common water spider, Dolomedes aquaticus, is a well-camouflaged but conspicuously large arachnid that lives between stones in the riverbed. The genus, widespread around the world, has about 100 species. They can run on water, assisted by their hydrophobic velvety hairs, and use their legs to ‘fish’ for insects by feeling for their vibrations.

Although water spiders are usually nocturnal, it’s not uncommon to see them during the day when the passage of your boots disturbs them. Having been fearful of spiders myself, I’ve come to admire them, and enjoy watching large Dolomedes aquaticus scuttle about in backcountry riverbeds – a seemingly unstable and flood-prone place to make your home.

Here are three places where I’ve seen them. 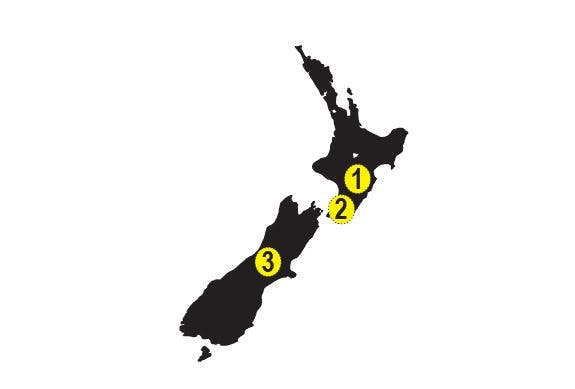 Apias Creek is a large tributary of the Ikawatea River, which drains the northern

Ruahine Range. Although there are no formal tracks into its headwaters, it’s easy enough to drop into the creek from the main Ruahine Range. Two rough bivouacs, Mistake and Rockslide, provide shelter. Lower down the creek, a short track climbs sharply over a shoulder to avoid a gorge, ending at Ikawatea Forks Hut.

The eastern Tararua valleys make great destinations to retreat to if the tops are being hounded by north-westerlies. Totara Flats is the largest open flats of the heavily gorged Waiohine River, and boasts one large, comfortable hut. The river is good for summer swimming – as well as spider hunting.

The Wilberforce drains the Southern Alps south of Arthur’s Pass, offering a route to Browning Pass and the West Coast. A wide, gravelly riverbed makes for straightforward travel (if river levels allow fording) – as well as good spider habitat.