The moment he fell, Greg Ross knew he was in serious trouble. “I went straight into deep shock,” he says. “When my arm ripped out of its socket there was a loud crack and pop, and the pain was overwhelming.”

Realising that struggle would only make matters worse, Ross slipped into his sleeping bag to rest and stay warm. For two days he lay almost vertically in inescapable agony among inhospitable West Coast scrub. He was in shock and too weak to move. If it rained, he’d have died of hypothermia. But dehydration was also a major issue.

“I had no water when I was in the sleeping bag,” says the 63-year-old grandfather. “And I didn’t eat any of my remaining food, as it would have made me more thirsty.”

The nights were clear and temperatures dropped to -6℃ . After the first day he was still too weak to move, but after two nights under the stars he had summoned enough strength to lift himself out of the sleeping bag.

Ross knew he was less than 2km from Frisco Hut – a basic, remote structure high above the Hokitika River. But he also knew help was still at least six days away, when he hoped a friend would raise the alarm.

He had to get to the hut, not just for water and warmth, but for any chance of being rescued. But he didn’t trust that the path he was on would lead him there. “I knew I should be able to see the hut from the tops, take a bearing, then slide straight down to it,” says Ross. “The terrain was impossible – it was almost vertical and covered in scrub.”

With his right arm numb and useless, Ross fought his way upwards, through the dense scrub, on his hands and knees, for three-and-a-half hours. Without the strength to carry his pack or even put his boots on, Ross travelled barefoot with just a headlamp and a watch.

As expected, he spotted the hut from the tops, sidled across until he was directly above it, then shimmied down the hill on his backside.

“I had to slow myself down,” explains Ross. “I told myself ‘don’t rush – you’ve got 12 hours of daylight. Go slow, one metre at a time, then have a rest’. It was worth taking my time – I wouldn’t have had a second shot at it.”

After two hours of painstakingly slow progress, he arrived at his holy grail. “It felt like a triumph. All I wanted was water, I was so dehydrated. The hut has a stream beside it, so the first thing I did was grab a billy from inside, fill it up and start gulping down this beautiful water.” 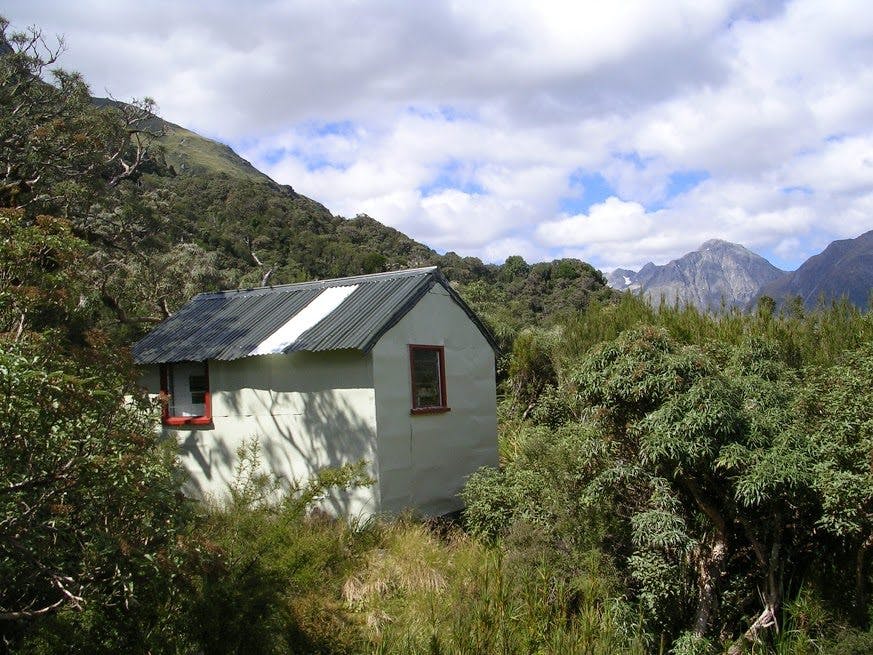 But once the euphoria of reaching the hut had subsided, a new reality hit. No-one would arrive for several days, and there were no emergency supplies – no food, clothes, bedding or matches.

To stay warm Ross tossed and turned, huddled between two mattresses. Occasionally, when the sun came out, he could lay a mattress outside and doze in the warm rays. He also cleared foliage from the hut’s helipad to make life easier for his would-be rescuers.

But otherwise it was a constant struggle to stay warm – one that became harder by the day, as his body weakened.

Ross took strength from survival stories he’d read. “I’ve read about Jews in the Second World War who survived months and months, their bodies living off their own muscle, fat and tissue. There were also allied pilots shot down who would hide for weeks and weeks in freezing conditions.”

Ross lost more than 10kg in his ordeal and would fantasise about the food he’d eat when back in civilisation. “I’d make lists of what I would buy; peanut butter, honey, cheese – all food I’d left in my pack.”

At last, it reached 8pm on the day when Ross had asked that a friend raise the alarm should he not have returned. It was dark and conditions were poor, so he knew search and rescue would probably leave the search until the following morning. He also knew they would search each hut along the route he said he would take: Cedar Flat Hut, Top Toaroha Hut, Toaroha Saddle Bivvy, Poet Hut, before reaching Frisco.

At 10am he heard the whirring sound of a rescue helicopter – a sound he’d dreamed of for more than a week. “It was a huge relief,” says Ross. “I was on my last legs. I didn’t know if I’d last two or three more nights but I knew I was getting close because my body wasn’t producing the heat.” The rescuers gave him muesli bars and fruit cake and within minutes he was back in civilisation.

In 50 years of tramping Ross, who now lives in Canada but visits his family here each year, had never had a serious accident. He knew the area well and had cut the track on which he fell 31 years ago while working for the New Zealand Forest Service. But the track had changed a lot since then. It still heads up a sharp spur next to Derby Creek as it had before, but rather than traversing across to the hut, slips have forced the track to drop and climb several times before reaching the hut. It was as Ross was pondering whether he was still on the correct track that he slipped.

Leaving intentions with a friend and in each of the huts saved his life. But the experience has fundamentally changed the way Ross will tramp in the future.

“During my time in the sleeping bag I said I’m never ever tramping solo or without a beacon again,” says Ross who, throughout his tramping life, has always relied on a map and compass and has never felt the need to carry a personal locator beacon until now.

“It’s fine giving someone your intentions, due date and route plan, but if you slip and break your leg in the pouring rain, you’ll still die of hypothermia. If I’d had a beacon I’d have been rescued within hours and saved myself seven nights.”

It was a lesson Ross learnt the hard way. Fortunately for him, he lived to tell the tale and to again experience the joy of toast smothered in the likes of peanut butter, honey and cheese.