Your car will kindly climb with you the first 945m of ascent to Porters Pass. From here, make your own way through the scrub and tussock, which soon give way to gravel and shattered rock on the approach to Foggy Peak. From there, drop into two saddles along easy-going terrain before reaching the summit of Castle Hill Peak. The views are stunning, stretching from the clearly-visible Aoraki/Mt Cook to the Port Hills and much in between.

It was just a few days after my 17th birthday when we walked out the door of Syme Hut and into cloud. Luckily, it rolled away as quickly as it came and we were in brilliant sunshine.

The snow was firm and made for nice, crisp cramponing. To get to the summit, we descended a few metres to a saddle, then climbed 600m up the south face. There are no flat spots or downhills; nothing to ease the task of ascending – at least not until you reach the crater rim, which is only about 30m below the summit.

The slope started off benignly enough but gradually became steeper. Soon we were walking in zigzags to ease the burden on our calves. For the last 300 vertical metres, the snow merged with small sastrugi ice. This required care to walk on as it would have been very easy to roll an ankle, sending you plummeting downwards.

At every corner of the zigzag, we would cut a platform so we could rest our ankles. The mountain’s face got steeper and was a bit out of my comfort zone, but we pressed on.

Once the rim was gained, we sat down with relief. The first real rest we had in about two hours since leaving Syme Hut. Crampon straps were tightened for the final assault of the summit. We walked along the crater for a little bit before reaching the very top. We stood on the summit, victorious.

Well, half victorious. We still had to get down.

The ascent through the forest is steep and when you reach the 1021m summit of Mt Fox the climbing isn’t yet done. That’s because the exceptional view of the Southern Alps, Fox Glacier and out to the Tasman Sea is gained from Pt1345, a kilometre or so further on. Best climbed early in the morning, as cloud tends to roll in during the afternoon obscuring the extraordinary view. 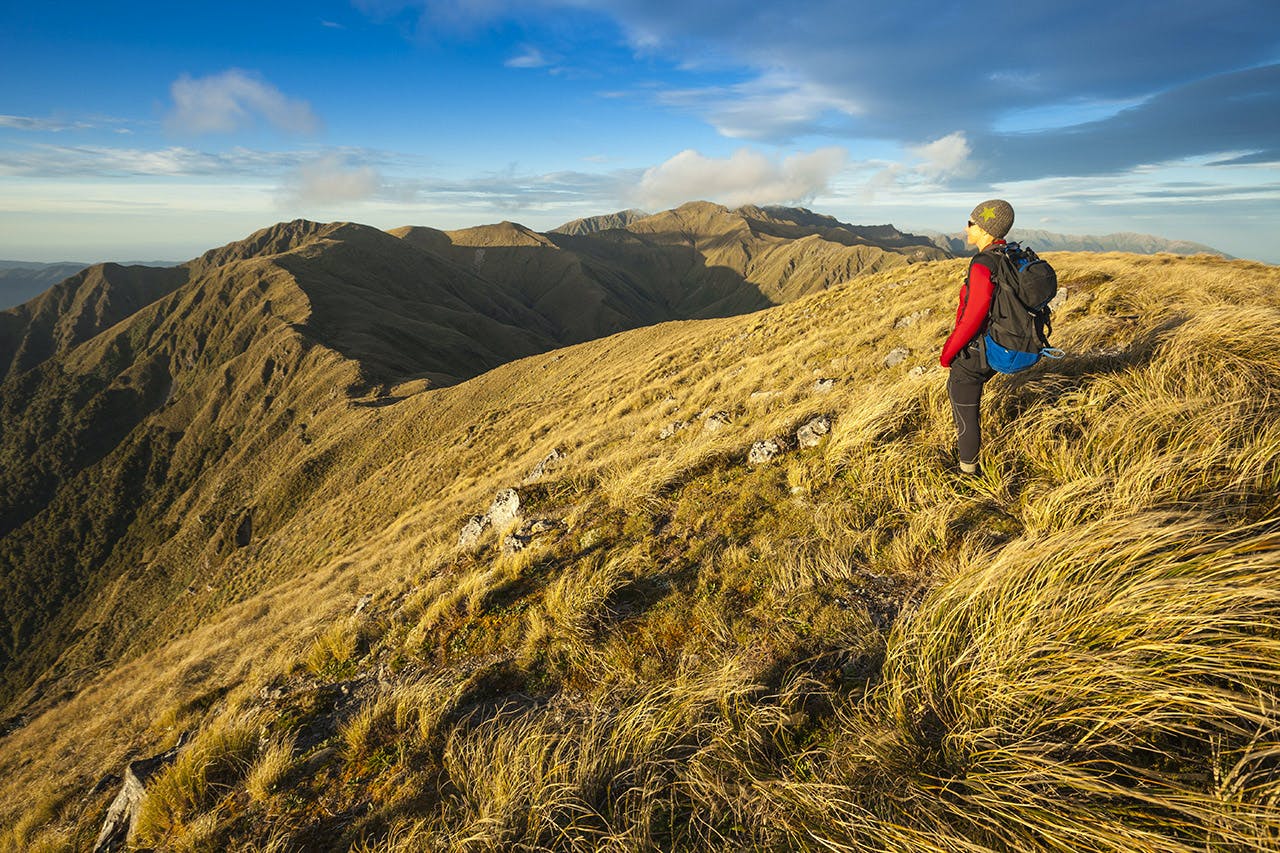 Undoubtedly the classic ‘tick’ for Wellingtonians, Mt Hector is an iconic New Zealand peak and is easily recognised in photos by its distinctive wooden memorial cross to Wellington Tramping Club members killed during the two world wars. The cross can take on a dramatic stature when it’s thickly coated in rime ice after a winter storm.

On the western edge of the range, Hector is most easily accessed from Otaki Forks via the historic Field Hut and the new Kime Hut. Kime makes the best overnight stay, but the peak is also attainable as a day trip from Otaki Forks for the fit.

Recognised by the unusually-shaped slip on its lofty flanks, Mt Fishtail is one of the classic climbs in Mt Richmond Forest Park. However, it’s only frequented by die-hard trampers or locals from around Blenheim.

Accessed off Northbank Road, running parallel with the Wairau River, the trackhead is on Pine Valley Road. A leisurely amble along the track is abruptly cut short with a cold crossing.

Then the real ascent begins, hauling yourself up a vertiginous spur track, which eases after many hours’ hard yakka through beech forest. One must then tip-toe along a rocky spine and cross a giant scree towards the diminutive four-bunk Fishtail Hut. Situated on the south side of the mountain and at the mercy of gale force winds, this is no place to be in a winter storm.

After a straightforward 200m climb to the obvious low point above the hut, the route heads south-east along unstable rock to the summit cairn.

From the summit of Lewis Pass Highway, a rocky and sometimes snowy spire can be seen in the far distance rising high above the Upper Maruia Valley. Gloriana Peak has approaches from not only the Upper Maruia, but also from the Ada and Matakitaki valleys.

Gloriana, together with her sister summit of Faerie Queene, 2236m, are relatively popular peaks for those who regularly traverse the St James Walkway which runs along the southern and eastern sides of the Spenser Mountains, of which these two are among the highest summits.

Gloriana is the more attractive summit, owing to its sharp profile from the south. The south approach is particularly interesting as it involves climbing into the high tarn basins and over a 2000m col just to reach the peak. From this point, the ridge can be traversed, or, with a small detour into the head of a feeder of the upper West Matakitaki, the easier northern slopes can be climbed to the summit.

The view from here encompasses just about all of Nelson Lakes National Park as well as the Lewis Pass National Reserve and peaks as far away as the Kaikoura and Raglan ranges.

Directly below the summit, to the south, are the inky black depths of a large alpine tarn adding to the spectacle from the summit. An ice axe and sometimes crampons will be required on this peak.

Maunga Hikurangi is the highest non-volcanic mountain in the North Island. The most appropriate translation for Hiku-rangi is ‘the end of the sky’ – when not hidden in mist, it’s the first point in the country to catch the morning sun. Often done as a three-day tramp, one day would suffice for the very fit.

Leave SH35 near Ruatoria, drive Tapuaeroa Valley Rd to the Raparapaririki Homestead, then cross a bridge over to Pakihiroa Station. Permission must be sought from Te Runanga O Ngati Porou to use the steep farm road for 3-4 hours. A track then climbs Alaska Spur for half an hour to the Gisborne Tramping and Canoeing Club’s hut, nestled on a grassy bench at 1200m. Ngati Porou took over the building more than a decade ago and require a fee.

Behind Hikurangi Hut, a poled route sidles through tussock around the mountain’s western flanks to a tarn. A steep, but not technical scramble up a rocky chute leads to the ridgeline where the wooden trig is usually visible, only five minutes away. 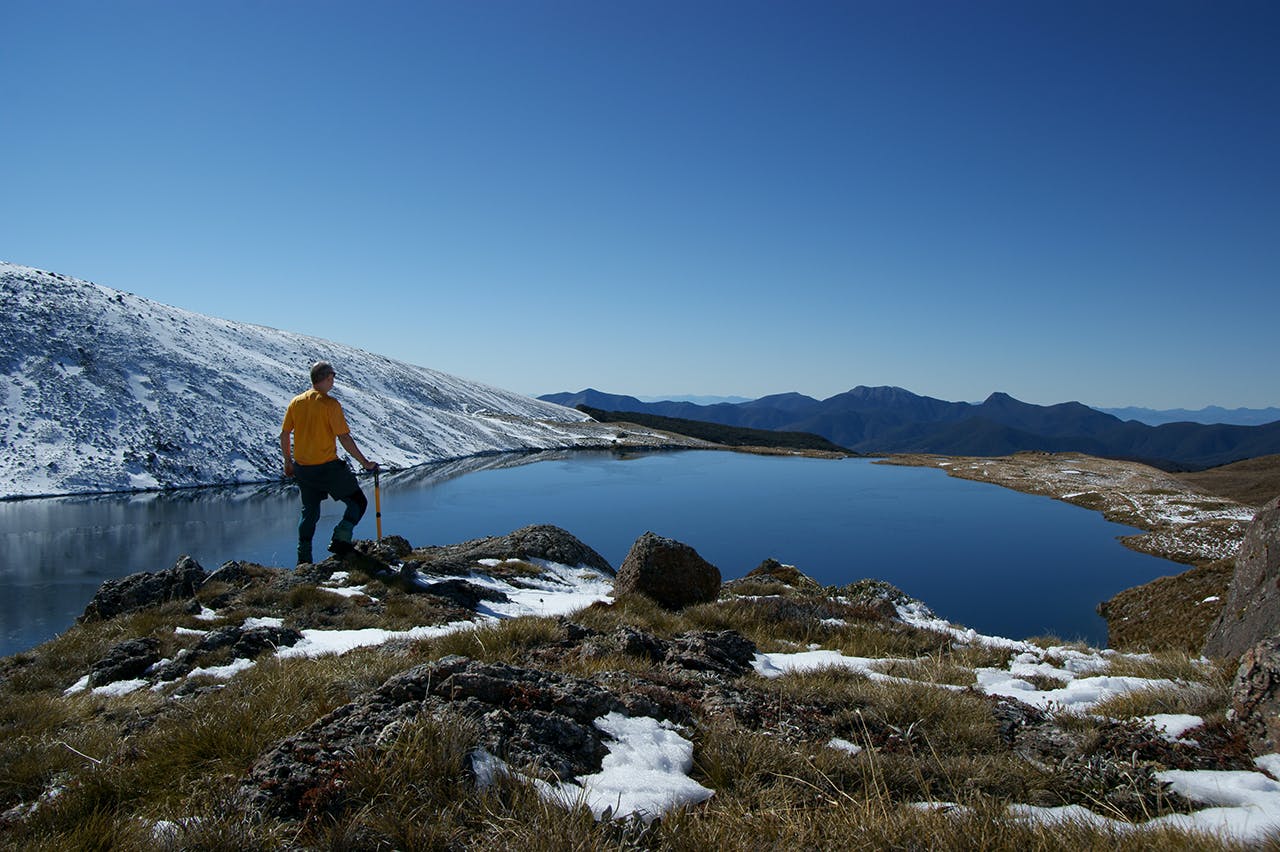 Lake Sylvester is passed on the route to Iron Hill. Photo: Ray Salisbury

Climbing from the Cobb Reservoir to Sylvester Hut takes 1.5 hours, sweating up the old vehicle track under laden packs. This is my favourite DOC hut, in my favourite corner of the country. It’s layered with human history and route options. From here, you can tackle the tricky traverse over Mt Benson to Fenella Hut. Or follow the old cairned trail past Lake Lillie to Diamond Lake, then along to remote Ruby Lake. In 1858, surveyor James Mackay discovered and named these lakes and mountains. He was vainly hoping to find a possible road-link with the Buller River, much further south. Based at his campsite beside Lake Lockett, the young explorer climbed Iron Hill ‘just after sunrise’.

An easy route follows the bush edge from Sylvester Hut to the lake. Onward, across the swampy bridge between Little Lake Sylvester and over a hillock to Iron Lake, in winter a flat, frozen expanse encircled by a wall of rock and ice rising into a perfect blue sky. Search for a safe passage through rocky ramparts which tower above the lake outlet. A large cairn indicates a route onto the eastern shoulder of Iron Hill. More cairns lead around a buttress into a gully – if this is filled with snow, this gut gives access to the tops, using an ice-axe for support.

Topping out on Iron Hill, the highest point on the Lockett Range, you’ll be greeted with a 360-degree panorama which is still  exactly as described by Mackay in 1858. Due west is Mt Domett; through a gap in the Karamea Gorge is the Tasman Sea, south-east is Mt Arthur, north-east is Mt Egmont, a faint mirage floating above the Taranaki Bight – a tramper’s paradise.

An old volcano that first erupted some 2.9 million years ago, Mt Karioi  has long since become extinct. Its eroded remains form a commanding backdrop to the township of Raglan. The Karioi Track provides the most direct route to the summit and has ladders and sections of chain on the steeper sections (a less strenuous option is the Wairake Track). The summit, marked by a telecommunications aerial, has views over the Raglan, Aotea and Kawhia harbours, as well as Pirongia and the more distant peaks of Maungatautari, Te Aroha and Pureora.

High above Lake Te Anau on the Kepler Track, Mt Luxmore is one of a series of summits at a similar altitude that run along the crest of the range above the track. It is readily and often climbed from the Kepler as it stands barely 100m higher than the track’s highest point.

The view from the summit covers Lake Te Anau, the Te Anau Basin, and Lake Manapouri.