We’ve all got a bucket list – those trips we want to tick off before we clock out – but what’s on yours might not be on ours. So Wilderness canvassed contributors far and wide to compile a (subjectively) definitive must-do list.

Tapuae-o-Uenuku (2885m), the highest mountain in the Kaikoura Ranges and the loftiest outside the Southern Alps, has long drawn climbers.

Famously climbed by Ed Hillary on an epic solo weekend effort when he cycled from the Burnham Military Camp during the early 1940s, the mountain is not particularly technical, and can be climbed as a simple scramble in summer. During winter, however, snow lends it a grade 2- alpine pedigree.

Reaching the mountain requires a splash up the Hodder River, involving some 70 fords through two gorges – frigid during the depths of winter. It’s brown, rough country, with spiky plants including briar, matagouri and speargrass.

Past the second gorge, a track climbs above a waterfall, and on up to the Hodder Huts.

Up-valley, a boot-worn track winds across scree slopes to the junction with Staircase Stream, where a cairned route leads into a large basin beneath Tappy and its sizable neighbour, Mt Alarm. Some route-finding is required to gain the summit ridge, which is narrow enough to prove exhilarating. The summit offers fine views over a great swathe of mountains from Nelson Lakes to Kahurangi and the Richmond Ranges, and southwards across the Clarence River to the Seaward Kaikoura Range.

Access Up the Hodder River at Gladstone downs, off Awatere Valley Road. Permission should be gained from Bev and Alan Pitts, owners of Gladstone Downs (03 575 7471), beforehand
Time 3-4 days
Map BS27 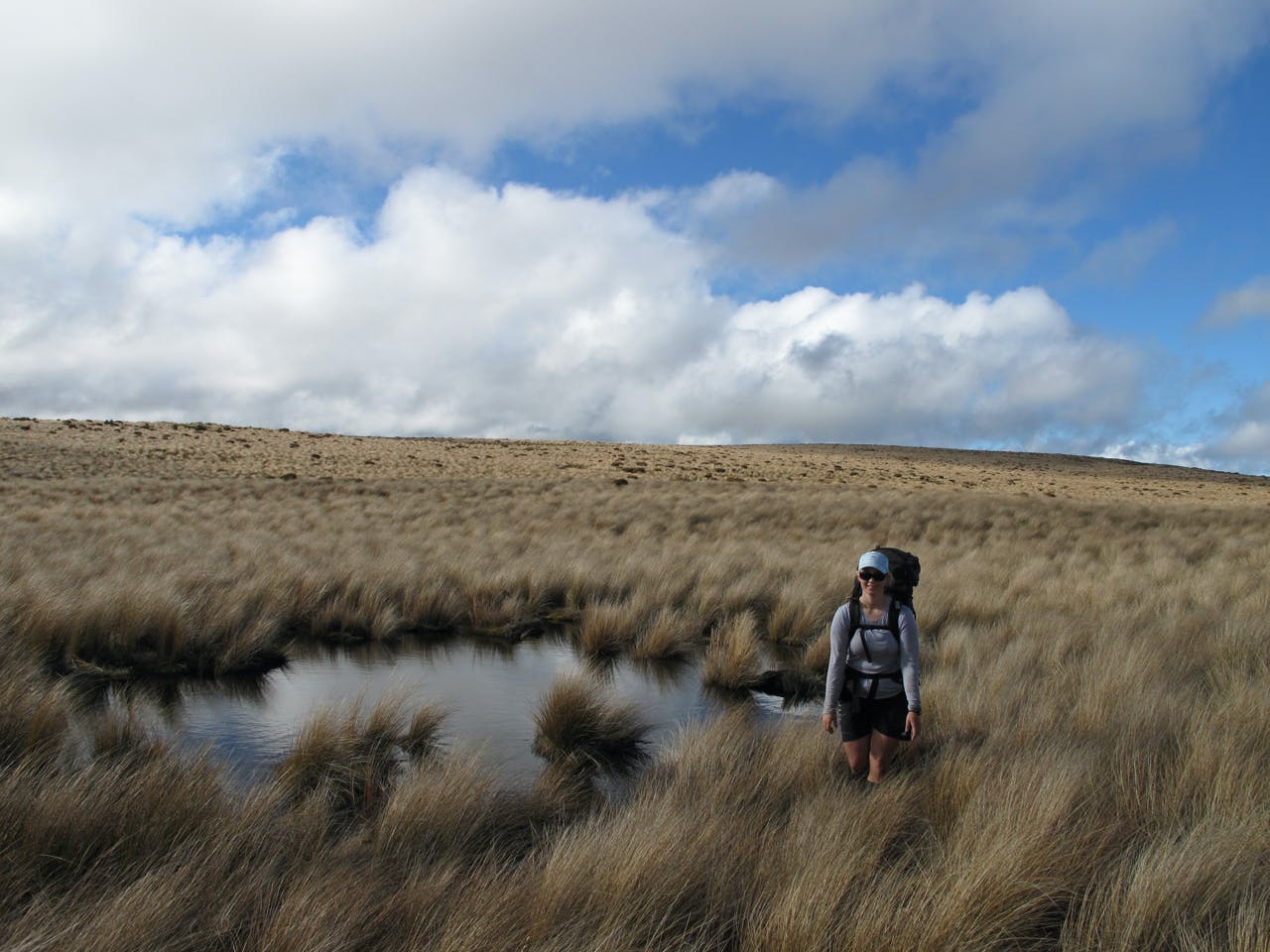 A trip to the best tramping country in the North Island should be part of anyone’s bucket list. The Ruahine Range may be long and skinny, but don’t let that fool you; the tramping is of the highest quality.

On this tramp you’ll retrace the steps of William Colenso by ascending Colenso Spur to the tops. From there, pleasant travel will take you north to the broad tarn-speckled ridge north of Tupari from where you should be able to make out Lake Colenso nestled in its own limestone basin.

Ruahine Corner Hut is the best hut in the North Island, and if you’ve got time to spare, a day here spent exploring the plateau would not be wasted. The forest is unique, with kaikawaka rising out of long red tussock and kiwi calling at night.

A dense network of tracks, huts and easily travelled rivers mean that you can tailor your crossing to fit, but after a visit to Lake Colenso there will be another day on the tops before you are out. As you cross to the mudstone cliffs of the Rangitikei catchment, you’ll be able to reflect on Colenso’s early crossing, and the fact that you’ve done it in more style with a stunning range of facilities. 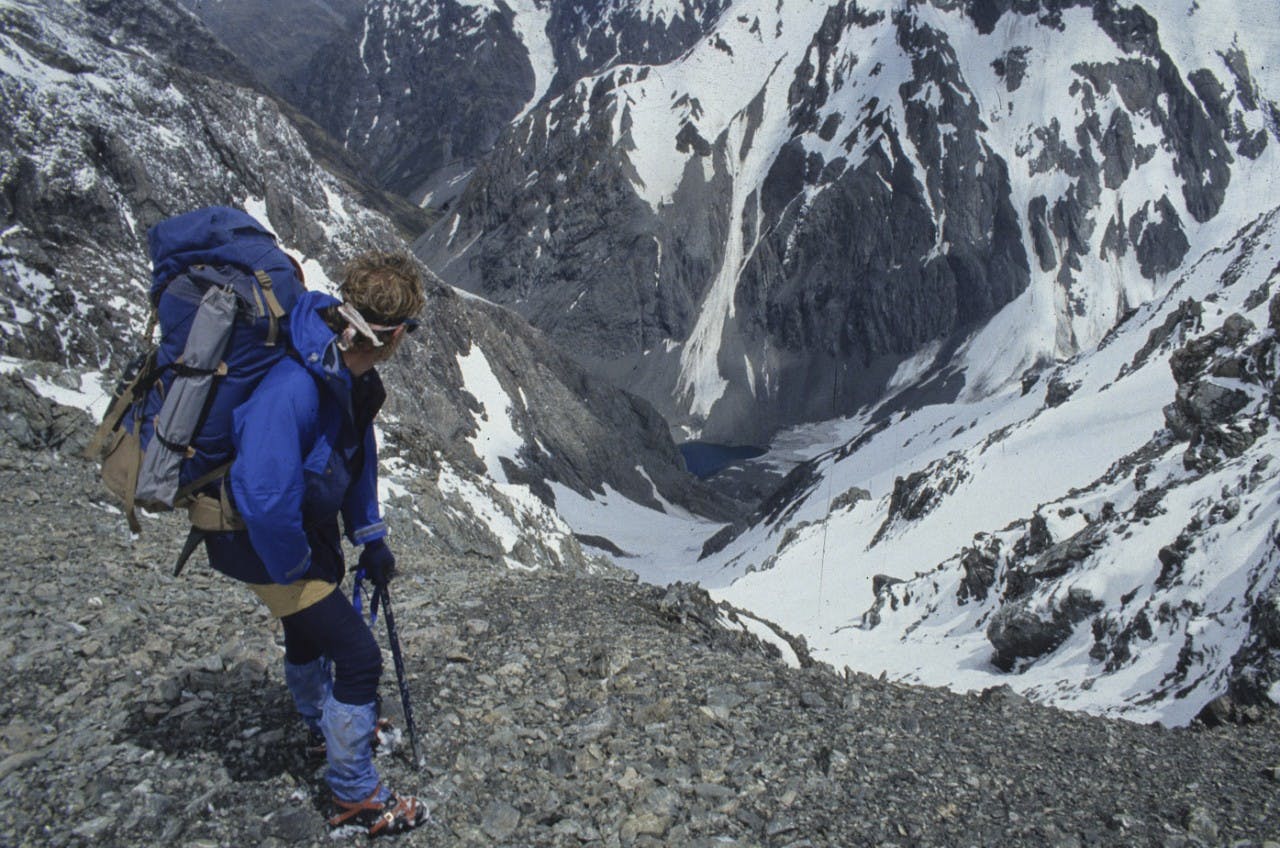 Starting from the Waimakariri Valley in Arthur’s Pass National Park this is a remarkable route that competent trampers could forge into the seldom-visited headwaters of the Canterbury and Westland alps. This route climbs first to Barker Hut and from there is completely unmarked as it traverses White Col, Unknown Col, Observation Col, and Martius Glacier and col to Whitcombe Pass.

From the latter the Whitcombe Valley can be descended on a tracked but rough and challenging three to four day add-on, or a return could be made to Canterbury via the Rakaia River in one to two days.

This is a taxing mountain journey, which will test the full range of your skills, fitness and determination. It should not be embarked upon by the ill-equipped as although there are several huts scattered through the valleys, there are once again no bridges until you reach the lower Whitcombe Valley. In addition, Unknown Col has a fearsome reputation and needs good snow cover to cross safely.

Party size should be small enough to make use of the equally small huts which have between two and six bunks and fully competent with swift river crossings and route finding.

This journey will take at least 10 days to complete. Extra time must be allowed for bad weather and swollen rivers and a rest day – you’ll need it.

Completing it will be a grand endeavour and a great achievement in your portfolio.

Mt Taranaki’s 4-5 day circumnavigation is a classic trip of singular beauty and uniqueness. There’s no other tramp quite like it in New Zealand, and it enjoys less traffic than the heavily touristed circuits at Tongariro National Park.

The mountain is one of the most symmetrical volcanoes on Earth and is situated in New Zealand’s second national park, Egmont. What makes this trip special is the diversity of terrain: from gnarled and mossy mountain beech forest, to subalpine plant zones and open scoria and lava slopes. There’s waterfalls, streams and amazing views across to the Central North Island volcanoes.

A good network of huts makes for reasonable walking times and the tramp has multiple entry points. There’s always the option of climbing to Taranaki’s 2518m summit too, if you have the skills and equipment. Syme Hut, perched on Fantham’s Peak makes a perfect base for a summit attempt, and is a worthwhile detour from the standard circuit for the views alone.

The trip can be completed at any time of the year, but winter can make it an extra special experience when Mt Taranaki’s cone carries a cloak of white and snow crunches underfoot in the frosty beech forest.

Wellington’s Southern Crossing of the Tararua Range combines pristine beech forested ridge travel with golden tussock tops and a traverse of the highest mountain in the range, 1529m Mt Hector.

The crossing (32km) is a two to three day trip for most people, with overnight stops in comfortable huts en-route. Expansive views to both sides of the North Island and a compelling history that you follow with every footstep combine to make this an essential New Zealand tramping experience.

From the north, the first hut reached is Field Hut cosily tucked into the bushline. Built in 1924, it’s the oldest tramping hut in New Zealand. From here the track climbs steadily through the alpine zone, revealing ever expansive views of the Kapiti Coast and a rich variety of alpine plants. An overnight stop for most is Kime Hut, situated in beautiful rolling tussock basins, and only an hour from Mt Hector. The following crossing of the Dress Circle to Alpha Hut is the tramp’s highlight (on a clear day) as you follow a sinuous trail along steep ridges towards Mt Alpha. From here Wellington Harbour can be seen sparkling far below and the city beyond, reminding you of the rat race you might have escaped.

Most people complete the crossing by traversing Marchant Ridge. 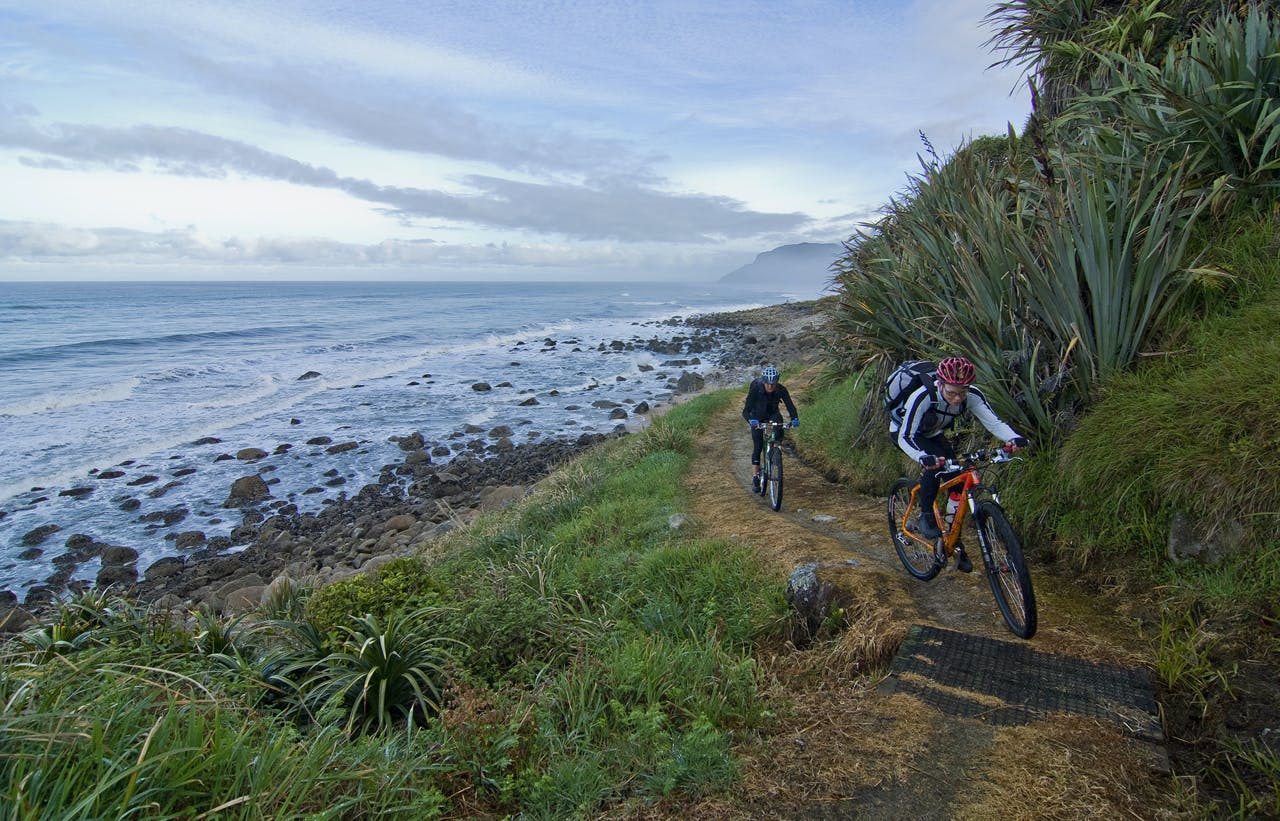 Lurking along the beautiful coastline of the Marlborough Sounds is superbly benched single track just waiting to be ridden. The track starts from Captain James Cook’s favourite bay, Ship Cove. The ride heads through lush bush on a roller coaster bench that never wanders too far from the deep blue sea, but climbs high enough to provide commanding views of the surrounding islands, bays and boats.

The ride features some long tough climbs, innumerable switchbacks and rough and rocky downhill’s. The first section to Kenepuru Saddle will challenge your riding skills, the middle section with its unrelenting climbs will test your stamina and the final 16km blast to Anakiwa is just good clean fun. It’s all made so easy with a profusion of water taxis providing not only a drop-off and pick-up service, but pack transport from camp to camp.

As an alternative to camping there are some excellent lodges along the way providing all levels of accommodation, café and restaurant meals to make the perfect bucket list trip even better.

A cruisey ride from Anakiwa back to Picton via the Queen Charlotte Drive and some roadside sections of bike track is a worthy chaser. 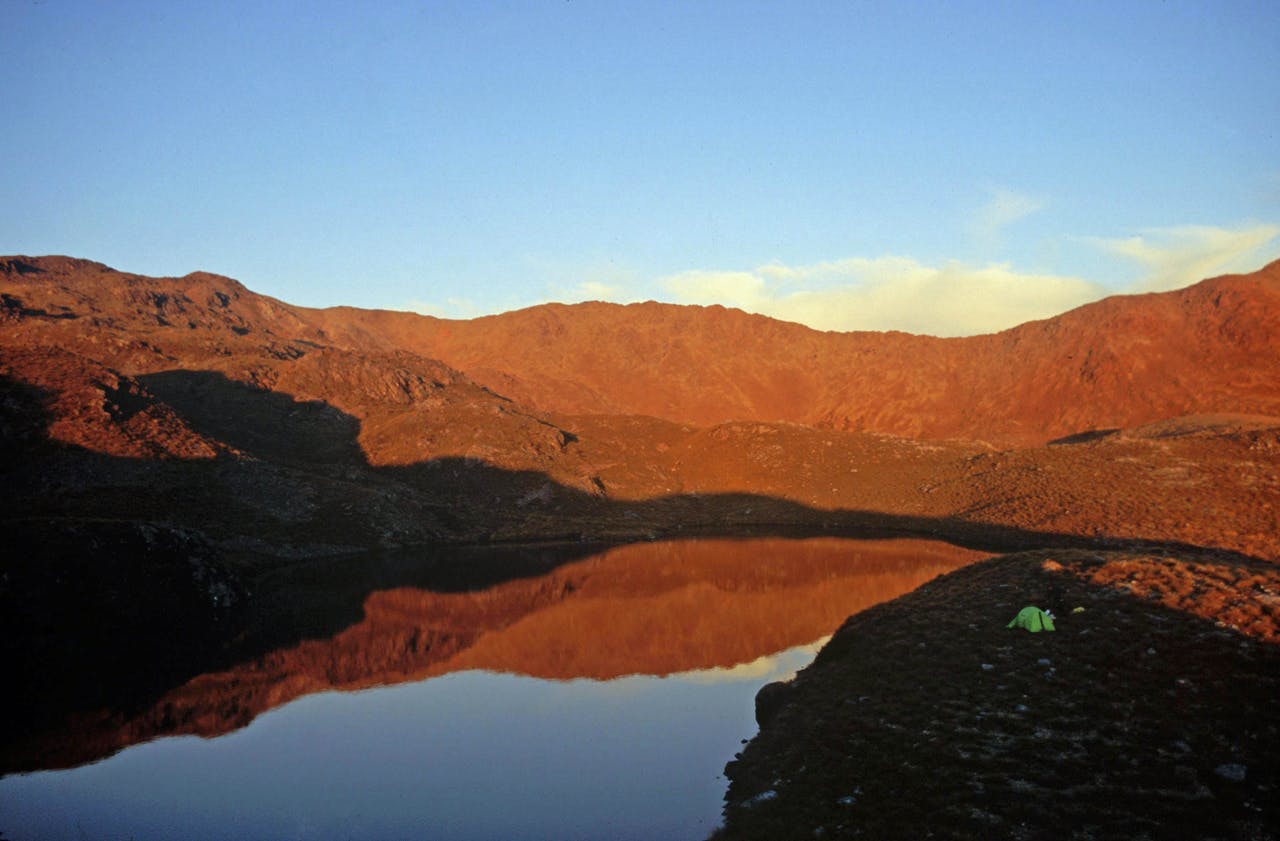 Put this trip on your bucket list, and be thankful you still can – in the 1970s this area looked like it was going to be mined and a gravel road was even bulldozed down the coast, but thankfully the plans never came to fruition.

The tramp starts at the end of the road on the West Coast – a worthy visit in itself – just above the Cascade River. A day and a bit will get you up the Cascade to a spot where you can head for the tops. This is legendary country – Arawhata Bill and Charlie Douglas camped up this gorgeous valley.

The Red Hills are spectacular. As you make your way along, admiring the stunning wilderness of the Olivine Range across the valley, long tussock gives way to red rock, devoid of vegetation with strips of asbestos and other strange minerals showing through. The camping is great and the tarns are big enough to swim in.

Some good vigorous South Westland bush travel will see you in the Pyke River and then suddenly you’re out on the beach at Big Bay. This is one of the best beaches in New Zealand, but it’s quiet; a few days walk from a road in any direction.

Head back up the coast. You can’t get lost if you keep the sea to your left. A wide variety of stones to tread on, but a continuous sense of remoteness. Even the tidy Long family home at Gorge River can’t detract from that.

You’ll get back to the Cascade following the old bulldozed track, breathing a sigh of relief that this incredible country was saved from becoming an asbestos mine.