Winter offers a fridge to keep cheesecake and other treats cool

As we hurtle onwards into the frigid depths of another New Zealand winter, the mere thought of tramping provokes a markedly different gamut of feelings than it does in summer.

There’s a heightened sense of danger, a nagging feeling that you could be doing something catastrophically irresponsible by venturing into the hills in this weather. We all know the score: short days, dark by 6pm. Snow underfoot, snow over-foot, a solid chunk of powder on top of your boot as your foot rises after sinking into a fresh dump. Wind, sharp as a knife.

Salvation is the hut, getting the blood back into fingers, a fire if you’re lucky, and then the best bit: food on the table.

The thing about tramping is that it distills life’s three essentials – food, clothing and shelter. It forces you to appreciate – no, relish – them.  And none more so than in winter, when supply is never guaranteed.

Taking kids tramping in winter is a wonderful thing. It’s more exciting, daring, and it promises adventures not available in summer. Places you’ve only ever visited under the warm January sun can seem as foreign as another planet. Tracks and trees are buried, gentle ambles become serious undertakings. Wherever you go, you get more bang for your buck. Once the three basic necessities are satisfied you can relax and get full enjoyment from wherever you end up. So, how do we tick off the basics with minimum  fuss and expense? 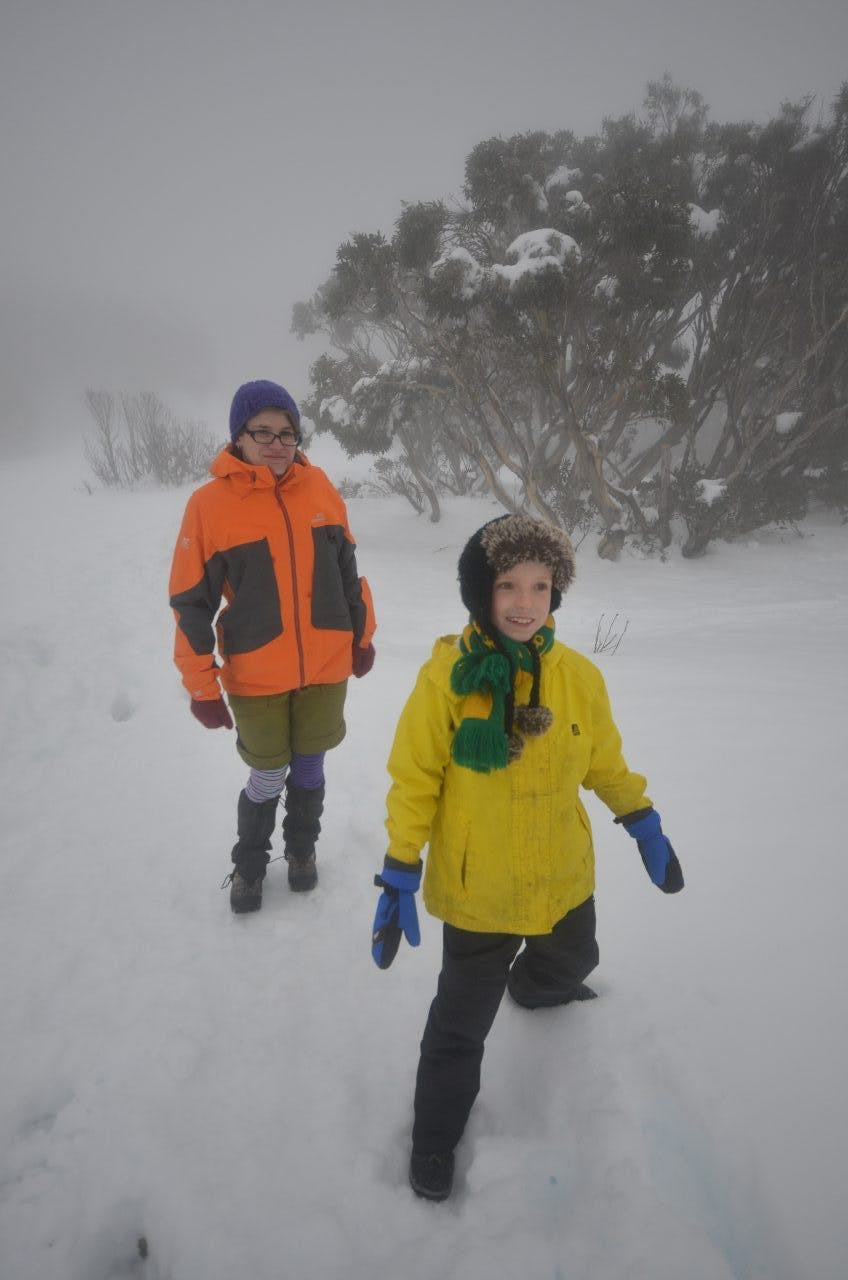 As far as shelter goes, there’s about 1000 huts to choose from, so that’s relatively easy. But not all huts are created equal. We all have our preferences, but my favourite winter huts are usually small, with a fireplace, and in the bush. Huts on the tops can be bleak in winter. This was illustrated acutely during one winter tramp in the Ruahines where we spent a warm night in Daphne Hut, beside the rushing Tukituki River, our card-playing faces lit by the glowing fire. The next night we climbed to Longview Hut – a great adventure – but the hut was freezing, with an air vent near the roof that let in not only a relentless draft, but actual snow, which pooled on the floor and eventually melted into very cold water. We spent a grim, cheerless night there, surrounded by no view except white.

If tops are your goal and you’re tramping with kids, then seek a hut with heating. It could be a good time to take advantage of huts usually too full in summer to bother with, such as Sunrise Hut, also in the Ruahines. We took kids there in winter once and spent a memorable afternoon sliding down nearby snow slopes on makeshift toboggans, and giving the kids a taste of faux-mountaineering by practising self-arresting with an ice axe (points awarded for drama and guile in the fall).

Decking the kids out with good clothing is easier than you think. Just layer them up. I find that adults worry more about what the kids are wearing than kids do. Having something dry to change into at the hut after they come in soaking from snow-sliding is essential, but it doesn’t matter what it’s made of – you’ll have the hut warm and cosy by then.

With two of the three essentials covered, the only thing left is food. You’ll want to think hot. Hot soup, hot drinks, hot porridge. Good stuff, but with a little lateral thinking you can also take advantage of the one thing winter offers that you’ll never usually find in the bush: a fridge. Think cheesecake. Those packets of cheesecake mix from the supermarket are perfect for a snowy tramp. The kids can do the mixing. Then simply cover the cake and leave it outside in the snow for an hour or two. Such unexpected decadence. Such is winter.