A landscape architecture student from Wellington has created a redesign of the Hollyford Track to make it wheelchair accessible.

Matt McKone, an avid tramper, completed the redesign for his master’s degree from Victoria University.

“One time when I was tramping, I thought that if a freak accident were to happen while I was playing rugby, or a car crash or something, I could lose the ability to go into the mountains. So, I decided to use my landscape architecture thesis to find a way to create that access.”

Consulting wheelchair access advocacy groups such as the Halberg Disability Sport Foundation, McKone designed a proposal which involves a series of interventions that would allow wheelchair users to complete the 56km, multi-day track. While it would be impossible to eliminate inclines and declines, the design would cut switchbacks into steeper sections, using a cable system to help users move up and down the track using a body harness and carabiners. The track around Little Homer Saddle would be extended, avoiding steeper gradients, which McKone said could also showcase the wilderness more.

“There’s one part of the track that really deteriorates, called the Demon Trail. Instead of doing that, I made it so a person could kayak across Lake McKerrow,” McKone said. After researching different technologies to make it possible, his design includes a series of platforms that would allow wheelchair users to lower themselves to the lake shore and into a kayak.

While he originally wanted to redesign one of the Great Walks, McKone chose the Hollyford with the intention of proposing a new Great Walk; one that could be accessible to all. Considering the percentage of steep gradients and the existing infrastructure of huts and bridges, the Hollyford fits his criteria of a good track to redesign. He broke it into difficulty levels: easy, intermediate, hard and extreme. He said about five per cent of the track fell into the ‘extreme’ category, requiring more extensive redesign or re-routing.

“By doing this project, I’ve shown the need and the idea is there, it’s just about getting into the technical side of how it can be included,” McKone said. “It’s a set of principles that could be applied to any track, and the Hollyford could be used as a case study.” 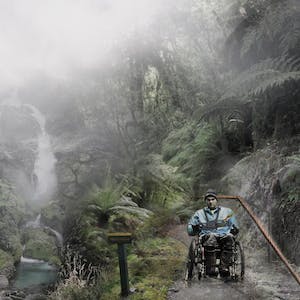 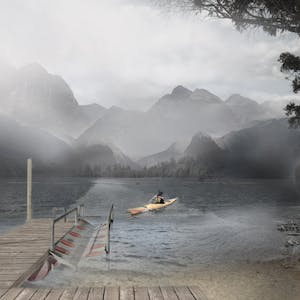 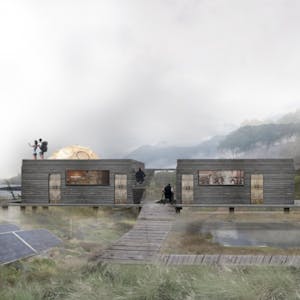 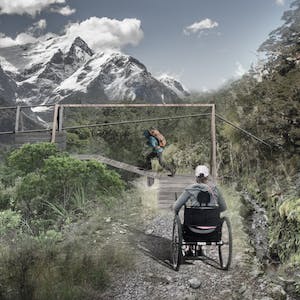