Right and wrongs on fatal trip

The rescue of a Czech woman from the Routeburn Track in August has raised awareness about tourism safety in the New Zealand outdoors.

Pavlina Pizova survived a month in the hut warden’s quarters of DOC’s Lake Mackenzie Hut after her partner fell and died on the track in late July. Poor winter conditions and her compromised physical and emotional state meant she couldn’t leave the hut, so Pizova kept herself fed with canned food left from the previous season, and stayed warm by burning firewood.

The Czech couple hadn’t communicated their intentions to anyone before they set out; it was the Czech authorities that raised the alarm.

Pizova has said she and her partner were warned ahead of time that the track conditions could be challenging and dangerous.

“Even though it is a Great Walk, and is a fantastic place, it can be unforgiving at times, and this is obviously one of those times,” DOC’s Wakatipu head ranger Geoff Owen said.

Owen said DOC will do a review of their safety systems in light of the events in order to determine if the department  could do things differently.

“When we have an incident like this, we’ll look at what we are currently doing; is there anything we can improve on? But also, we won’t take away the fact that people are responsible for themselves.”

In a press conference after her rescue, Pizova recognised that she and her partner could have been more prepared.

“I am aware we made a few mistakes not leaving our intentions with somebody, not carrying a PLB, and underestimating the winter conditions of the track,” she said.

Owen, however, commended Pizova on her ability to survive for so long.

“They understood what they were getting themselves into,” Owen said of the couple. “Whilst they may not have made a good first decision, both the police and myself commend her for making the decision to stay in the hut – that was absolutely the right decision. She was resourceful, resilient, and strong.” 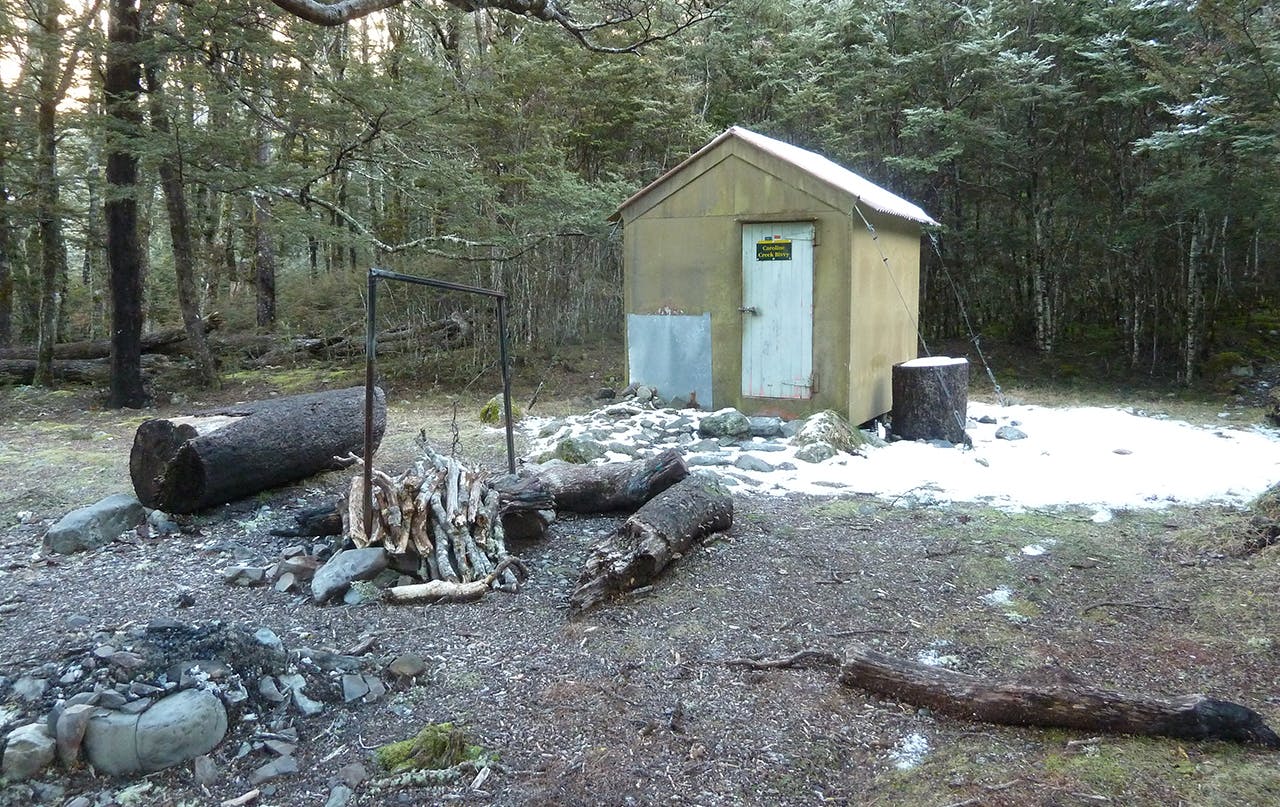 Caroline Creek Bivvy is set to be upgraded to a 10-bunk standard hut. Photo: DOC

Te Araroa Trail walkers are in for a treat: thanks to a generous individual who has donated the $250,000-$300,000 required to replace the archaic Caroline Creek Bivvy in the St James Conservation area of North Canterbury with a 10-bunk standard hut.

DOC’s North Canterbury operations manager Kingsley Timpson said the hut, while also used by locals for climbing and hunting, is an important stop for thru-hikers on the Te Araroa Trail. Timpson estimates that roughly 500 people use the hut each year.

The highest crossing of the trail is at Waiau Pass, which, for a southbound walker, is just before the biv. “This facility is the first hut – the refuge – that people receive coming over the pass. So it’s strategically quite an important location for a hut,” Timpson said.

The current two-bunk hut is also a popular base camp for climbers and hunters who tramp in from Lake Tennyson near Hanmer Springs. The bivvy is 17km from the road end in a normal vehicle, or 8km from the end of the 4WD access. In the summer, there’s a dual accessway for vehicles, horses and mountain bikes; it’s less than 10km from the St. James Cycle Trail.

The new hut will be built near the current hut; Timpson said there are two potential sites that are feasible for building.

He said the permits and consents will likely be completed before Christmas, and expects that building will be complete by the end of the summer. The donor paying for it all wished to remain anonymous. 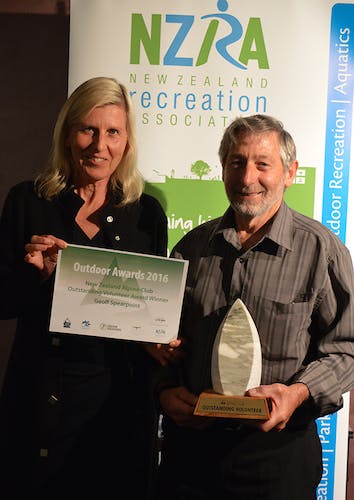 Geoff Spearpoint was recognised for his many years of volunteer work.

A number of outdoor leaders were honoured at the annual New Zealand Recreation Association Outdoor Awards.

Those awarded include Geoff Spearpoint, who took home the Outstanding Volunteer Award for his backcountry-hut volunteer initiatives. Spearpoint has been a leader in motivating volunteer efforts in the hills; he has helped with the restoration and management of both Tunnel Creek Hut and Roaring Billy Hut in South Westland.

The Supreme Award went to John and Christine Furminger for their 40 years of work in outdoor education programmes. 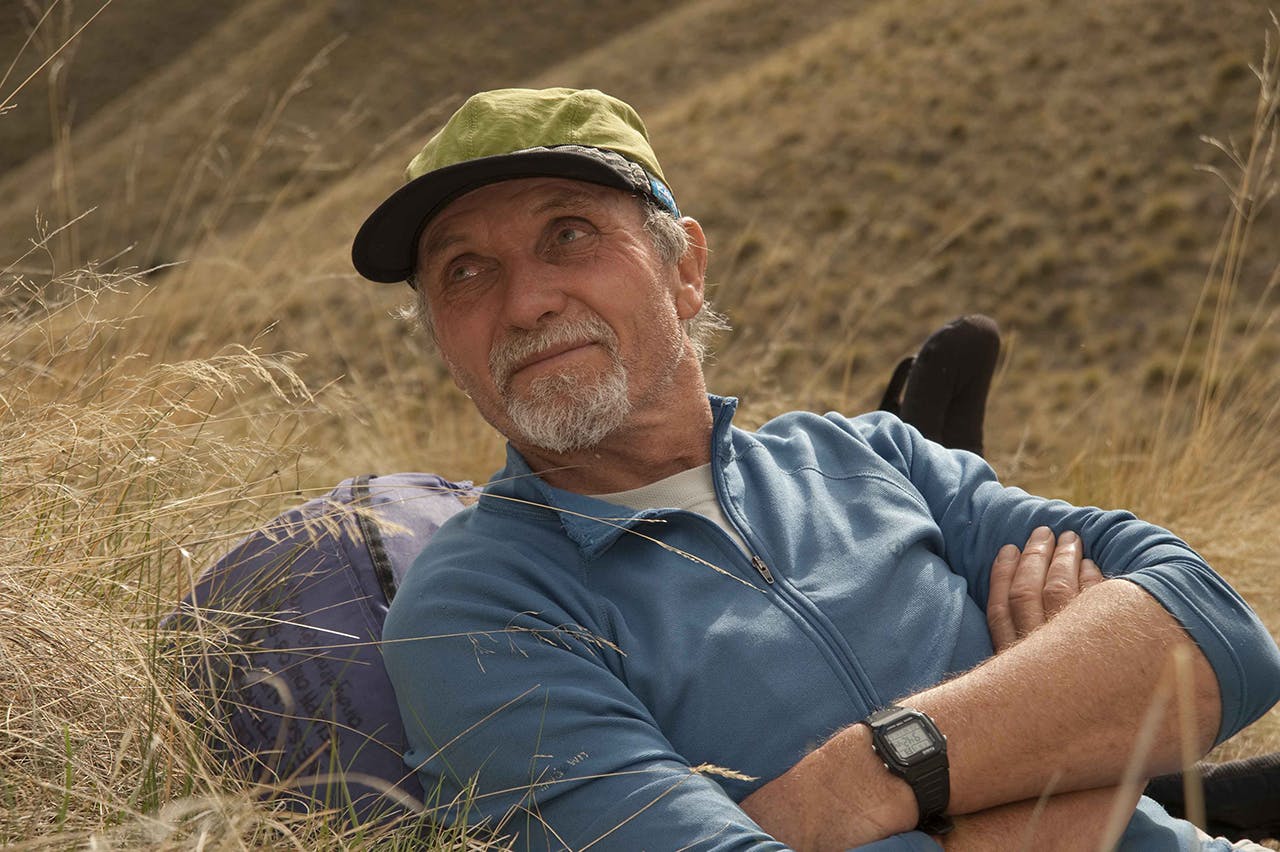 A memorial service in August celebrated the life of conservationist and tramper Andy Dennis, well-known as the author of the Paparoas Guide, Images of a Limestone Landscape, and several national park guides.

Andy, a long-time member of both Forest & Bird and Federated Mountain Clubs, was an articulate and outspoken conservationist who had a rare ability with words and a broad understanding of the natural world. Andy died in July, aged 72, after a battle with cancer. His legacy includes Kahurangi National Park, and Nelson’s Horoirangi Marine Reserve, both of which he championed – as well as important translations of old Icelandic sagas.

Andy was also a Member of the New Zealand Order of Merit.

Let the kids play in the mountains

Let the kids play their way in the mountains; the future of our mountains depends on it. That was the plea from Adventure Consultant’s Guy Cotter, at the recent Sustainable Summits Conference at Aoraki/Mt Cook.

The Everest expedition leader told the conference about a recent Tasman Glacier trip with his 22-year-old son, who he was taking ski touring in the high mountains for the first time.

“It was immediately clear to me that he wanted to use the terrain very differently from how I used it. His eyes were drawn to the steep seracs and before you know it he was building kickers and doing back flips, effectively using the area as a terrain park. It opened my eyes as to how the future generation wants to interact with the environment. We need to encourage that.”

Cotter recalled how his own interaction with the mountains was different from that of his father’s day. “They never went winter climbing, mainly due to avalanche hazard.

“Watching my son reminded me of a section in the Mt Aspiring National Park Management Plan. It was probably well intentioned but the tone creates further barriers for younger generations becoming engaged in the mountains.

“(The plan states) ‘new commercial thrill-seeking activities should not be allowed in the park’. To me it’s sad. It’s like the authors of that plan said you can’t do anything new. You can only partake in activities that we enjoyed when we went into the mountains.

“I feel more than ever we have a responsibility to encourage our youth to develop a relationship with our mountains, because that generation will be responsible for the future stewardship of our wilderness. If we don’t enable them to develop that now our mountains will have lost that voice that will protect them into the future.”