In an effort to enhance and promote the Oparara Basin on the West Coast, DOC is considering a design plan which may include building a walkway, creating a lightshow and installing lifesize moas in the Oparara Arches.

The arches are along a system of tracks through the basin, and are about 15 minute’s walk from the road-end car park.

“There’s a really great system of walkways, created by the Oparara Trust, linking the arches, and also taking you to two caves: Box Canyon and Crazy Paving Cave. Beyond there is the specially restricted area of the Honeycomb Hill Cave system, with the largest deposit of subfossil remains in New Zealand,” West Coast photographer, caver, and outdoor instructor Neil Silverwood said. “Going into there, it’s a little bit like walking into a museum.”

Oparara, while unique, isn’t on the regular tourist track. It’s at the end of the road on the northern West Coast and receives around 20,000 visitors a year – much less than hotspots like Punakaiki which gets 500,000 visitors.

“The northern part of the West Coast is hurting from the loss of extractive industry and closure of the big cement manufacturer, Holcim. Things are a bit grim around here,” Dickson said.

Because DOC manages Kahurangi National Park, where the arches are located, it stepped in to see how it could help develop Oparara.  Mick Abbott, Head of the School of Landscape Architecture at Lincoln University was asked to develop a draft proposal for the Oparara enhancements. The objective, Abbott said, was to promote knowledge of the area’s former moa population. The proposal suggests that Karamea could be branded ‘Moa Town’, with the extinct bird being a key feature of Oparara Arches.

“What we want to do is draw people to the Oparara to discover the story of moa and learn about what’s taking place in the region with kiwi and whio, because our challenge is to take the story of moa and make sure there’s no more extinctions. That’s the front and centre message.”

The proposal includes developing a new walkway that will be bolted into the limestone, erecting lifesize moas along the walkway, and designing a light show that would cast the shapes of Haast eagles and moa onto the limestone walls.

“It will only work when someone is there – someone would have to put their hand over an iPad-type thing, and a bird would come out of the crack and fly out at the end of the cave,” Abbott said. “People go through using torches as it is, so we are trying to mimic that use of torches.”

Silverwood, a member of the NZ Speleological Society, sees the proposal as heavy-handed. “It’s very out of sync with the natural balance,” he said.

A specific concern of Silverwood’s is that the caves are a “hot spot” for the rare Spelungula spider, which at 15cm long is the largest spider in New Zealand. The proposed light shows and increased visitors could have a negative impact on the spider’s habitat, Silverwood said.

However, Dickson said environmental concerns, such as the spider’s protection, will come first when considering any developments.

“There needs to be further thought and investment,” he said. “Are these concepts workable, can we mitigate the risks, and what is the carrying capacity.” Dickson said the Nelson Conservation Board and the NZ Speleological Society would be contacted for input.

“It’s a relatively small footprint,” Dickson said. “We think it is innovative, experiential and exciting and will offer some very strong conservation messages to the public.”

Dickson will be presenting DOC’s suggestions to the Ministry of Business by early March. While he’s supportive of promoting the area, he’s skeptical the Oparara Arches proposal will greatly increase tourism to the northern West Coast.

“I just don’t think we’re going to get vast numbers of people there. In spite of some of the figures I’ve seen, I can’t imagine their reality.” 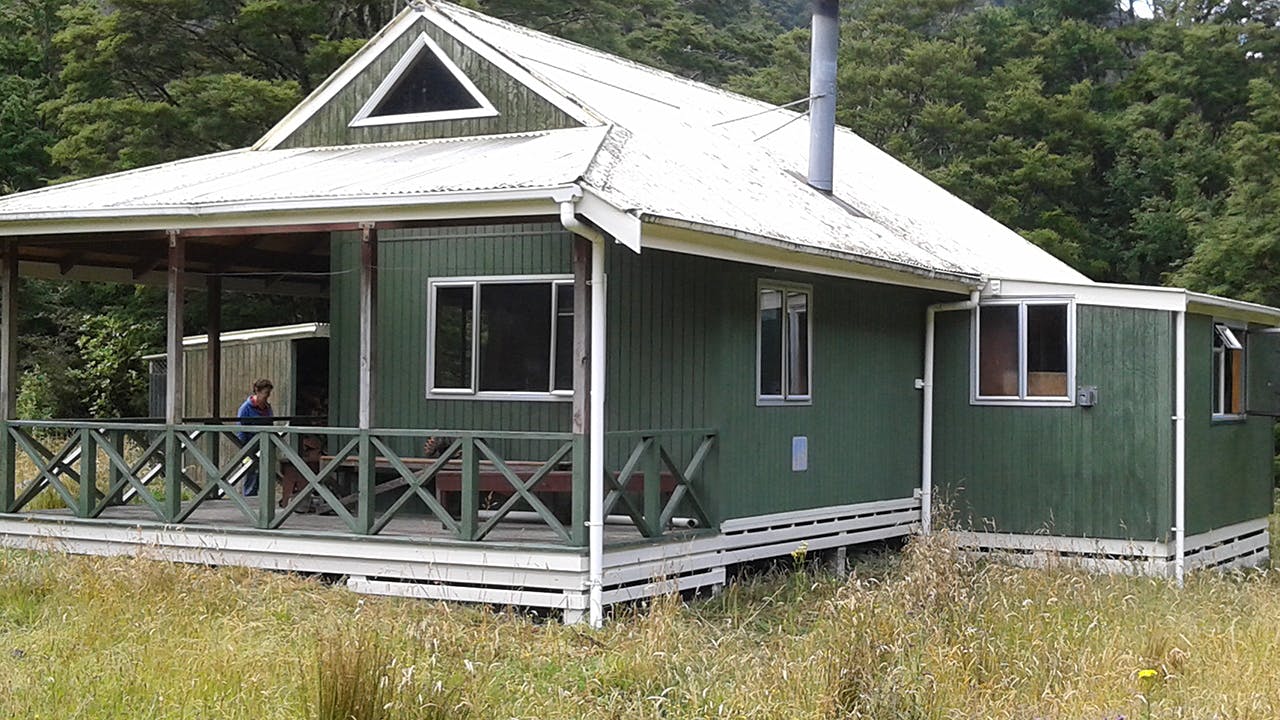 Mitre Flats Hut in the Tararua Forest Park had some maintenance recently, thanks to the Masterton Tramping Club.

Over the club’s six-day working bee, the 14-bunk hut was “transformed inside and out”. The hut is accessible on the Barra Track from Upper Waingawa Road or on the Atiwhakatu Track from Holdsworth Road.

The group had to be flexible due to some adverse weather; on the wet days, they gave the inside a spruce-up, and painted the exterior when the weather allowed.

Masterton Tramping Club captain Nigel Boniface said the work was overdue – it had been 15 years since its last paint job.

“It’s in a lovely clearing alongside the Waingawa River,” Boniface said. “It’s fairly local for us, and a hut that new members go to quite frequently.”

The hut still needs its roof repainted – a job which will be done by DOC. 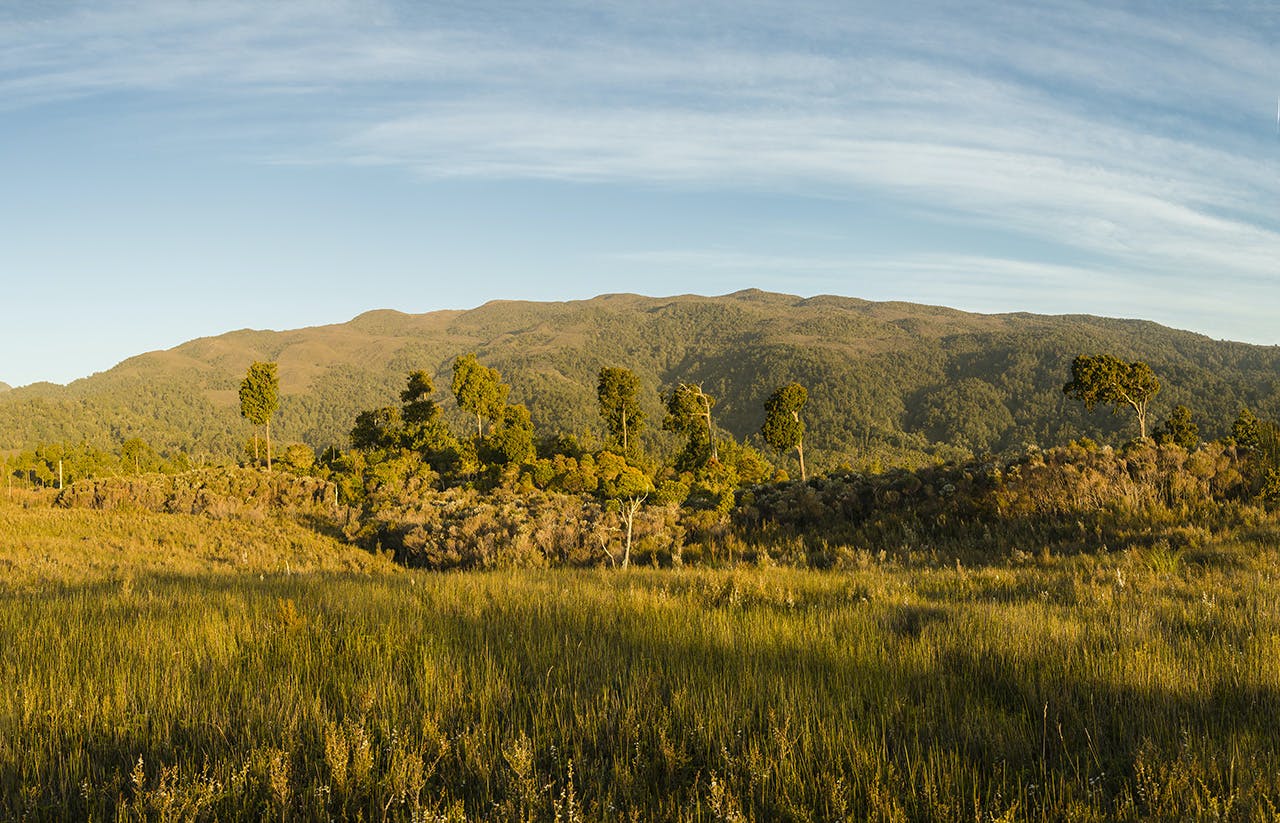 Environmental group Forest & Bird is raising alarm bells over an “unusual” appeal lodged by the Department of Conservation against a 2016 ruling that deemed a land swap in Ruahine Forest Park illegal.

Forest & Bird first challenged the land swap in 2015, winning an appeal last year that blocked the trade, which would swap 22ha of Ruahine Forest Park for 170ha of land that the Hawke’s Bay Regional Investment Company (HBRIC) would potentially buy from Smedley Station. HBRIC wants the 22ha for the Ruatanihwa dam irrigation scheme.

“It is very strange,” Hague said of Conservation Minister Maggie Barry’s decision to take the issue to the Supreme Court. “If the minister is allowed to overturn this decision by the Court of Appeal, then, potentially, lots of other conservation land is up for grabs for commercial exploitation. We don’t believe that’s right.”

Hague said it’s unlikely the Hawke’s Bay Regional Council will push ahead with the dam even if the land swap is allowed to go ahead, which leaves him questioning why Barry would be pushing to overturn the Appeal Court’s ruling.

Forest & Bird will appear in the Supreme Court in late February to defend the Court of Appeal’s 2016 decision, in which the land swap was determined illegal.

A spokesperson for Minister Barry said: “The case currently before the courts is on points of law.  The Court of Appeal’s decision affects the way public conservation land is managed in New Zealand. The Department needs absolute clarity on whether it can consider the broader purposes of the Conservation Act for decisions that have the potential to enhance public conservation land overall.” 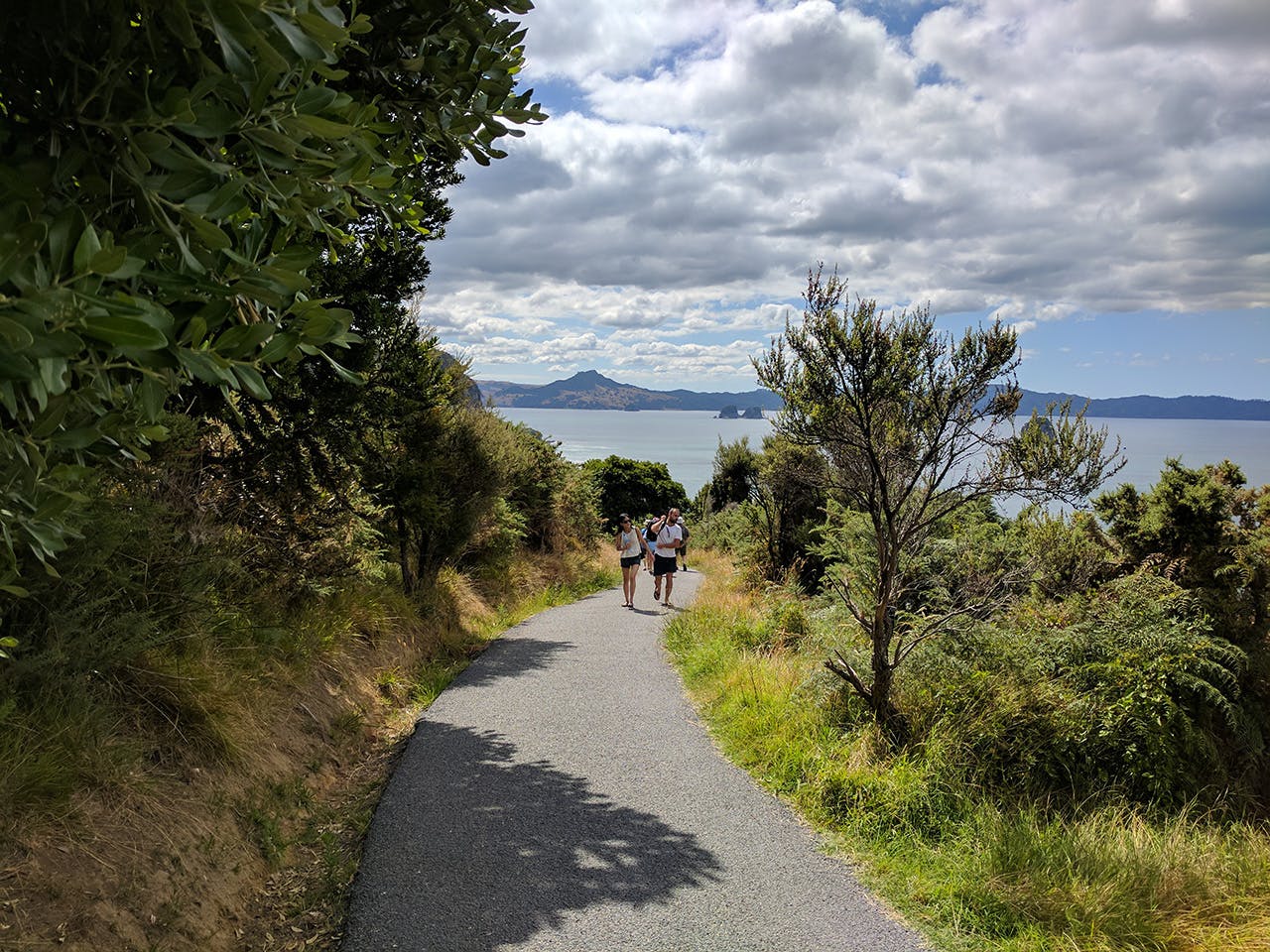 The track to Cathedral Cove has been paved to deal with the estimated 500,000 visitors who walk it each year. Photo: Bill Stead

The busy trail to the Coromandel’s Cathedral Cove has become a much faster undertaking, with the entire 2.5km track now sealed.

The Department of Conservation chose to pave the walkway late last year. DOC ranger Paul McKinnie said with an estimated 500,000 visitors each year walking the track, it was an obvious choice for the department to seal it.

“You get mixed reactions with this kind of work. Some people want to keep it natural, others want to make it look tidier so it’s easier to maintain,” McKinnie said.

“With the amount of visitors we get, it was a bit of a no-brainer. It needed to be sealed, being a high-priority site, and just to improve the experience.

“When you’ve got lots of overseas visitors and children, you need to have something a little bit more consistent.”

However, Chair of the Hahei Stakeholders, Bill Stead, said he isn’t impressed.

“I think it detracts from the wilderness aspect of New Zealand’s walks. It’s become more like a walk down a road. It hardly seems like an outdoor experience, walking down a sealed path,” Stead said.

McKinnie said other factors that influenced DOC’s decision to seal the track were to mitigate the spread of kauri dieback – there are about 300 kauri trees in the area – and to reduce the time and cost of ongoing track maintenance.

But Stead said he sees it as a poor use of funding. “They should have spent the money worrying about parking for people to access the track.” There are 45 spaces in the closest car park and a further 200 spots in a park-and-ride near the entrance to Hahei, which Stead said still isn’t enough for the peak periods.

McKinnie agreed that parking is an issue for visitors, saying the department needs to work with the community to develop new options, including a new initial 200-capacity car park on Lees Road, from where visitors can walk directly to Cathedral Cove. 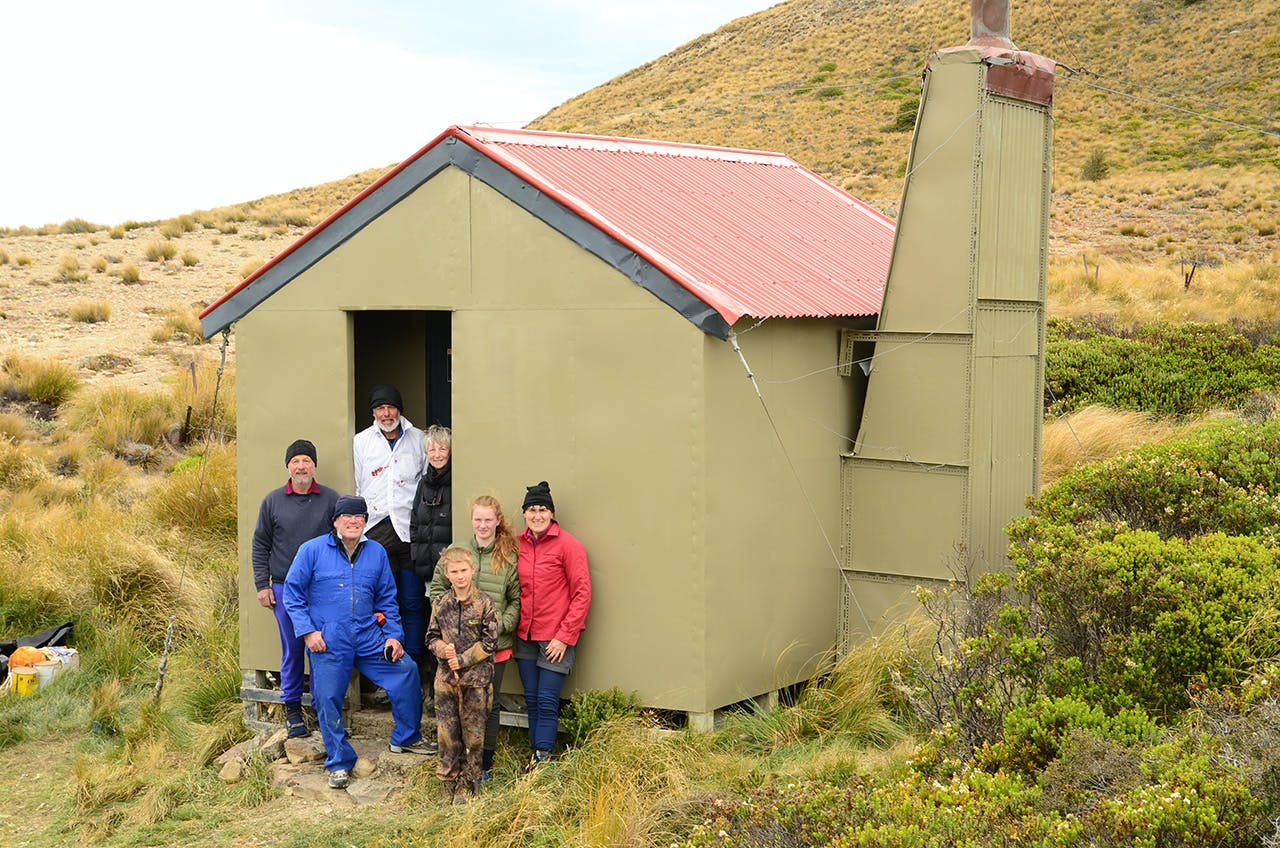 Two huts in the Canterbury region have a new coat of paint, thanks to volunteers from the New Zealand Alpine Club and DOC.

A group of eight painted Tarn and Youngman Stream huts in the Puketeraki Forest Conservation Area in January. Taking advantage of a period of fine weather, the group used a quad bike to get the donated paint, supplies, and a week’s worth of food to Tarn Hut.

DOC Rangiora ranger Jim Henderson organised the painting, which he said wouldn’t have been possible without the assistance from a group of NZAC volunteers.

“In the DOC scheme of things, these huts are lesser used, so don’t feature high on our priority list. But they still need TLC,” Henderson said.

The huts are both former forest service huts; Tarn, which Henderson describes as “idyllic,” has four bunks; Youngman Stream is a six-bunker. They’re both located on a Puketeraki Range circuit, which he said is a good weekend trip for people who live in Christchurch.

“It’s more of a route than a track up the valley – one of the more challenging ones,” Henderson said.

Henderson’s family; his wife Claire and their children Mari and Hamish, plus four volunteers from the NZAC Christchurch section, started with Tarn Hut, which hadn’t had any maintenance in nearly 20 years.

Henderson said it was quite challenging conditions, painting Tarn Hut in gale force winds. “It was quite an act trying to hold onto the paint at times, to get it on the hut rather than throughout the environment and the vegetation,” Henderson said.

The group carried the supplies and remaining paint to Youngman Stream Hut, roughly two hours away. “That required some pretty heavy packing – and we nearly got blown off the ridge in the process,” he said.

In addition to the obvious aesthetic improvement, painting protects the hut cladding, which is vital for these old huts, Henderson said.

“They’re in very good condition, they’re excellent examples of that style of forest service hut,” he said. “Because it’s a very dry area – in a rain shadow – they’re very well preserved, with little rust or corrosion. However, the paint work was woeful. They were definitely due for a bit of a spruce-up.”

Ideally, he’d like to see old huts painted every 10 years to keep them in good shape.