The Wanaka company that lost six of its staff in the recent Everest avalanche has been raising money to help rebuild the victims’ homes and educate their children.

Adventure Consultants set up its Sherpa Future Fund in 2014 after three of their sherpas died in the Khumbu Icefall. This year, the avalanche that killed six staff at Everest Base Camp following the magnitude 7.8 earthquake has only intensified the appeal.

So far, it has raised more than $70,000 for over 40 families and general manager Suze Kelly says it feels good to be able to help from afar. She and Guy Cotter were at Camp One when the avalanche hit.

“We helped with the clean up at Base Camp, but after three weeks we were at the end of what we could practically do there,” she said.

“It’s good to get home and do something positive, helping in a long term capacity. There’s no government support in Nepal so things can get desperate for families without their breadwinner.”

Kelly says there has been great support from Adventure Consultants’ network of clients and the company’s keen to get clients back to the region as soon as the monsoon season finishes.

To donate to the fund visit www.adventureconsultants.com.

Chaos on the Dart River 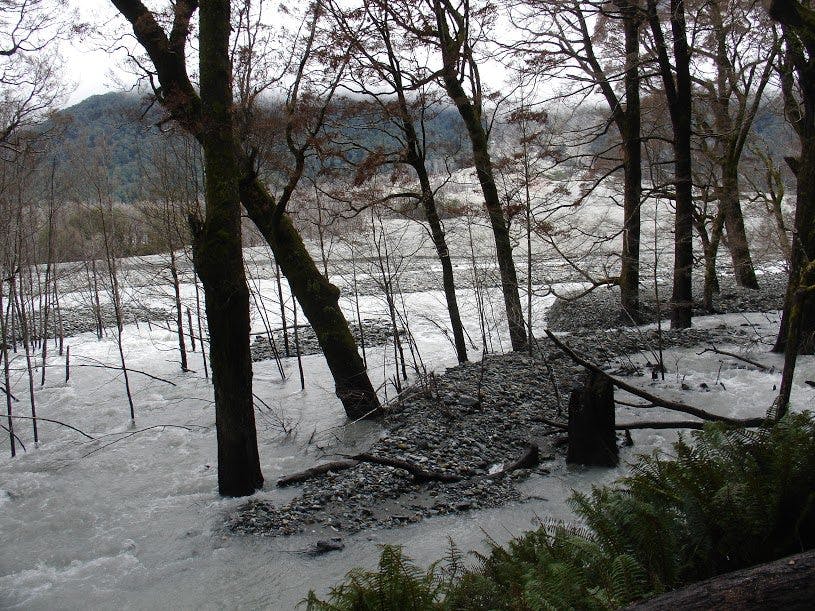 The Rees-Dart Track will almost certainly remain out of bounds for the rest of 2015, as new storms have wreaked havoc in the lower Dart Valley.

The track had already been severely damaged by an enormous landslide at Sandy Bluff, wiping out a section of the popular trail and damming the valley floor, creating a 3km-long lake up Dredge Flat.

DOC managed to build a rough trail overlooking the lake but in January this year, the track was destroyed downstream from Sandy Bluff, as debris from the lake dam fell into the river, lifting the riverbed and undercutting the track as water eroded the hillside.

Storms in June have exacerbated the problem, raising the riverbed even higher, causing more erosion problems. A press release from DOC described the carnage: “The river is scouring and destabilising this area and the scale of undercutting erosion continues to surprise. Formerly intact hillsides have slipped and new cracks are emerging. Trees have been washed away, some crashing into other trees and producing a tangled mess.”

The destruction has forced GNS Science staff to rescue equipment they previously thought was safe, and has caused huge headaches for DOC staff hoping to build a new track.

“In recent months we have toiled to find a new route through very difficult country,” said DOC conservation services manager John Roberts. “We have to acknowledge that nature is in charge. The river could keep eroding until it meets some nearly vertical bedrock lining the valley edge.”

It seems doubtful a new track will be built by the New Year. 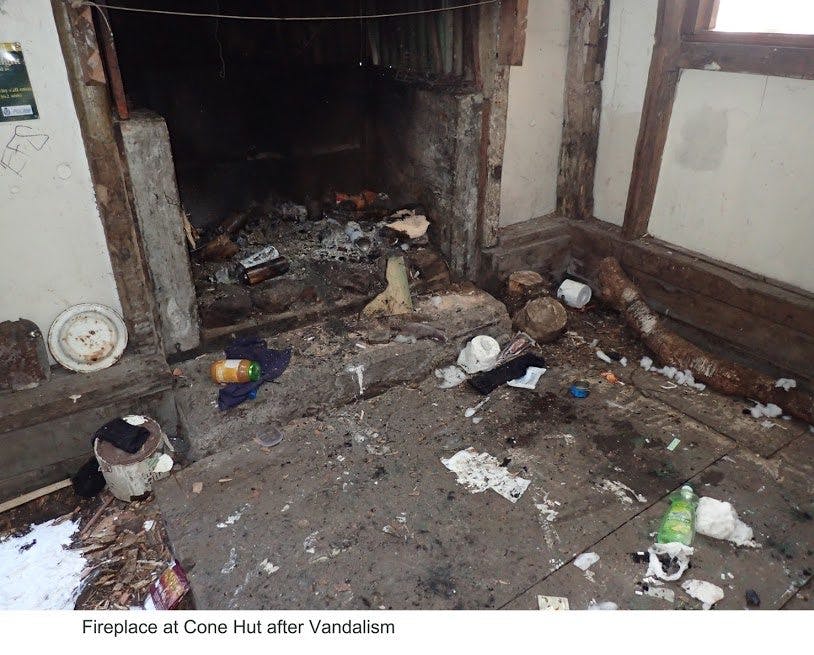 Vandals ripped mattresses, threw rubbish and poured white acrylic paint over a hut dear to the hearts of many Tararua trampers.

Cone Hut is almost 70 years old and is a particular favourite of traditional trampers who like their huts basic.

But Tararua Tramping Club member Barry Durrant was shocked to find such carnage on a trip to the historic hut over the weekend. He and a friend had planned to stay there but were so disgusted by what they saw, they left and stayed in the more popular Tutuwai Hut instead.

What makes this damage particularly unusual is that the hut is a good three-hour walk from the road end. But Durrant said the track had also been littered.

“Every so often there was this tape on the track and we saw the same tape in the hut too,” he said. “We were just gutted when we saw the state of the hut. It’s such a great spot and if you want to sit in front of an open fire then Cone Hut has always been the place to go to.”

Other than the roof, the hut is built from materials from the forest and half the floor is earth. Tararua Tramping Club look after it and a lot of work has been done by the club and DOC to restore it. But Durrant wonders how much more they can do if people treat it like this.

“The chap I was walking with is an ex-DOC ranger and he said this was the worst vandalism he’d seen. We’d been trying to keep it as a bush hut rather than putting floors in and making it flash, but we might need to do that now if all some people see is an old building they can destroy.” 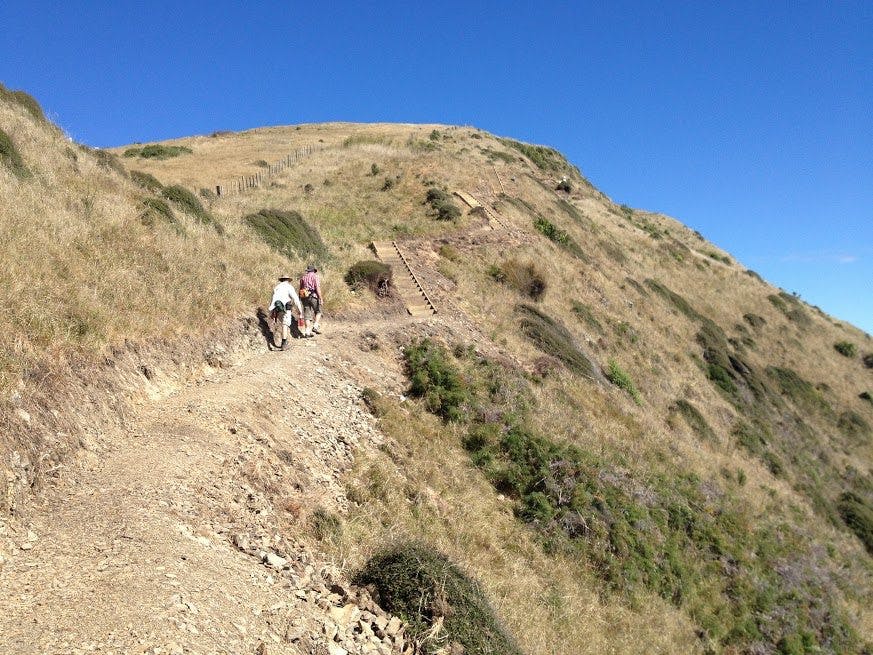 Climbing the Paekakariki Escarpment Track, which should be completed early next year. Photo: Te Araroa Trust

Two tracks to be added to the Te Araroa (TA) Trail over the next few months are set to make great day trips in their own right.

The trail’s chief executive officer Rob Wakelin is particularly excited about the prospect of the Paekakariki Escarpment Track north of Wellington.

The trail will be built on cliffs above SH1 and the railway line between Paekakariki to Pukerua Bay, an area Wakelin knows well.

“As someone who grew up in Paekakariki, this project has had special significance for me from the time I came on board and it will be a special feeling to see this magnificent route opened,” he said.

“You get unbelievable views and on a really clear day you can see Mt Taranaki and even Mt Ruapehu.”

The track, which replaces a footpath running alongside SH1, is targeting day-walkers as well as TA hikers so will be built to a good standard, though some sections will be reasonably steep.

It’s due to open in February or March next year and Wakelin believes it will take three to four hours to walk it one way.

Another trail, which Wakelin hopes will be open by Christmas, will be in Pureora Forest. Currently the TA trail breaks away from the Timber Trail, heading south-west along back roads to Taumaranui.

But a new trail will head directly south through conservation and forested land to hit SH41 near Waituhi Saddle. “People will still head to Taumaranui I imagine, because otherwise it’d be a pretty long slog without supplies,” said Wakelin. “Arriving on SH41 gives people a better chance of hitching a lift.”

The long term goal is to create a track from SH41 directly south through more forest to SH47 at the Central Plateau. 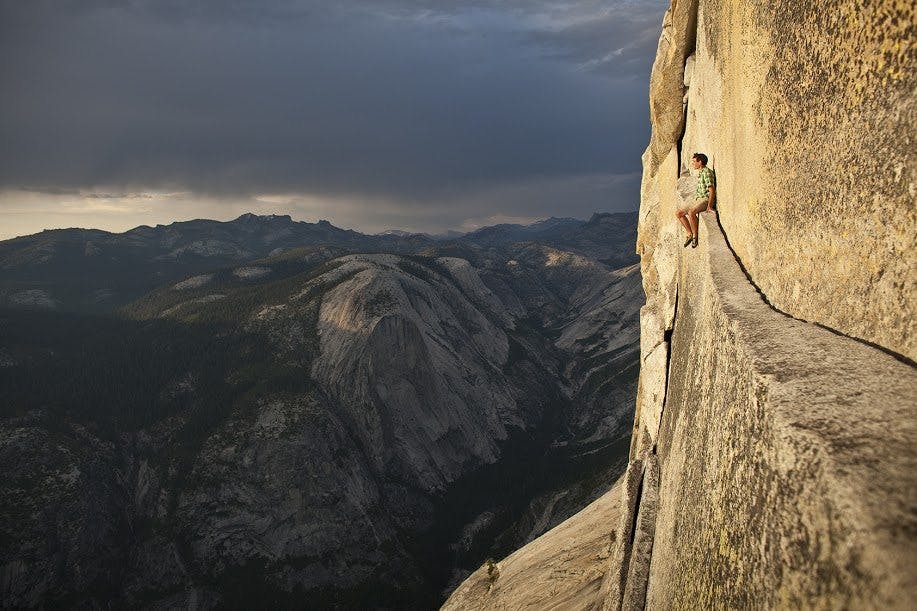 The least scary bit of the climb.

On his 10-day New Zealand trip, star climber Alex Honnold spoke to Wilderness magazine about becoming bored with climbing and needing to re-motivate himself for more cutting edge ascents

Alex Honnold is surely New Zealand Mountain Film Festival’s biggest ever coup. The 29-year-old is regarded as the best free solo climber that has ever lived. Without any form of protection, he climbs walls which, to the naked eye, look simply impossible. In fact, even the climbing fraternity thought many of these climbs impossible until Honnold proved it could be done.

Few have dared to hang from cliffs with only the tips of their fingers and toes with an 800m drop below – no-one has been more proficient at it.

It says a lot for Honnold’s stature that in Wanaka – at the heart of Otago – a packed house missed The Highlanders’ victory in the Super Rugby final to hear him talk.

Just watching YouTube videos of the Californian climbing is enough to make the palms sweat. And, even more remarkably, he says the photos and videos you see are usually the easy bits.

“When filming it’s normallay  re-enactment of the climb – usually on the easy pitches – on grades 24 or 25,” he said to Wilderness in an interview prior to his NZMFF talk. To film when performing the solo climb proper would risk affecting his concentration – not something you want to risk when a fall would mean certain death.

The famous shot of Honnold sitting on a ledge at Half Dome makes the stomach churn, to the amusement of the climber. “People see the photo and ask ‘was that scary?’ And I say ‘no – it’s a fricken ledge, it’s the least scary part of the whole thing’.

Although his free soloing and speed climbs are what catches the public’s imagination (he also holds many speed climbing records), this takes up less than 10 per cent of his climbing time and Honnold is just as happy doing normal bouldering.

New Zealand has been on his bucket list for a while, but this 10-day visit only gave him a taste of what the country has to offer.

“My friends say Castle Hill (in Canterbury) is one of the best bouldering spots in the world – but I’m not going to have time to get up there this time.”

Instead, climbers in Wanaka and Queenstown showed him some of the best climbing in the area, though Honnold found the schist somewhat different to the non-brittle granite he’s more accustomed to.

“There’s no way I’d free climb out here,” he said after climbing close to Wanaka. “By any objective measure the rock was bad – but I had a great time. When you go climbing you don’t need good rock – just a good day with friends climbing something challenging.”

Honnold is getting motivated to climb again after a recent lull. Feeling burned out, earlier this year he took two months away from the sport  – the first time he’s had more than a week off in the last seven years. He says once you start living the dream, that lifestyle ceases to remain the dream.

“I love the climbing life and I’m super happy with what I’m doing. But when you only travel to the most beautiful places in the world and climb on the best rock with the coolest people all year round you can start to think, this is kind of boring.

“Anything you do all the time just gets normal. Things that 10 years ago would be the chance of a lifetime, now it happens all the time and you’re like – oh whatever, it’s just another Tuesday.”

This year is a sabbatical of sorts, as Honnold is working towards the release of his book in November. He hopes the break will re-motivate him for more climbing next year.

But he can’t see himself free soloing big walls forever. “I probably won’t always be doing the cutting edge stuff because at some point I’ll lose the motivation for it. There aren’t that many big walls either, but there are still things I’d like to do.”

However, Honnold says he will always continue to do some form of free solo climbing: “Really easy solos to me feel like hiking. It’s fun and the best way to go up mountains.”