That Crossing – what to do

Ideas for managing the busy Tongariro Alpine Crossing may pave the way for new management approaches in other high-use areas, writes Kathy Ombler

It traverses a sacred taonga, a volcanic spectacle, an apparently famous movie landscape, and is an undeniable bucket-list walk. It’s also become the pin-up poster child in the current debate raging about tourism growth in New Zealand’s national parks; the place everyone quotes when they complain of crowds, car park overflows and crapping on the track (sorry, the alliteration was too tempting and anyway, tragically, it’s true).

‘Basically a conga line with a picnic at the top’ was one social media description, this January, of the Tongariro Alpine Crossing (TAC). More than 1000 walkers a day has become a regular occurrence. On the busiest day this summer, 2750 people walked the track. ‘People jams’ on the steepest, highest section are common. More toilets were added this season but there were still queues, and mess beside the track. The car parking issues have continued. New Zealanders are staying away, at peak times at least, and international visitors are starting to be heard, voicing dismay.

What to do? Last year Wilderness reported that a group comprising local iwi, DOC and guiding and transport concessionaires was close to agreement on a trial transport system for the TAC. The trial would entail developing car parks near the track’s two access roads (Mangatepopo and Ketetahi) with licenced shuttle buses transporting walkers to the track’s start and finish points and between the two car parks. The aim was to alleviate the current chaos, where private cars jam the length of both Mangatepopo and Ketetahi roads, and DOC contractors ‘manage’ the mayhem by the SH46/Ketetahi junction. It’s the kind of system that works well overseas but the trial, planned for this summer just gone, didn’t get off the ground.

Stew Barclay, a long-time walking guide in Tongariro National Park, decries the delay. “It’s just awful. Cars are parked all over the roadside vegetation. People are walking for 3-4km on those dusty roads, the buses manoeuvre around them. People rush over the crossing so they don’t miss their transport then sit waiting at the road end for an hour or more. Everyone starts early to beat the crowds, so they don’t, then after about 3-4pm there’s no one up there, yet there’s plenty of daylight.

“It is so simple to fix. Build two car parks. Close the two park roads to all but licenced shuttle bus operators. The current operators who transport walkers from local towns will still have that business. Commercial realities will sort things.”

Central government needs to put in the investment to pay for this, he adds. “Tourism is government’s number one earner, after all.”

He says it would be easier for everyone, including Kiwis who are used to driving themselves to the start of a track. “This way there’s no need to organise a car at each end; they can just get the shuttle back to where they started.”

Crowds on the track are not so easy to solve. Restricting numbers is legally problematic, with freedom of access into national parks enshrined in the legislation.

The horse has bolted, says Barclay. “We’ve promoted it to bolt. Let’s embrace what we have and put professional services in place to manage it. Because the bottom line is people still love it.”

Stagger starting times, he suggests. “People could start later and avoid the crowds. The bus shuttles could be managed to do this. I met a Kiwi family up at Emerald Lakes at 3pm one day, having a late lunch. They said they’d had a lovely walk with hardly anyone else around.

“And if people want a wilderness experience in Tongariro, there are still so many places. Let me guide them,” he says, tongue in cheek.

DOC recreation manager, Gavin Walker, agrees. “There are issues on the crossing and I don’t hide from that. However, Tongariro is such a small national park with multiple access points, there are so many places for backcountry, off-track experiences, or on-track experiences with few other people,”

In February, DOC announced a review, led by DOC and Ngāti Hikairo ki Tongariro, aimed ‘to improve the experience and manage growing visitor numbers on the Tongariro Alpine Crossing’.

By all accounts, this review will be undertaken at a higher level and be more wide-reaching than last year’s. DOC director general Lou Sanson has indicated it will consider the big questions; should there be closed access roads and mandatory park and ride, for a fee? Should there be daily maximum numbers? The answers, he suggests, could signal new approaches to the management of other, high-use conservation destinations.

No timing has been given for the review’s completion. 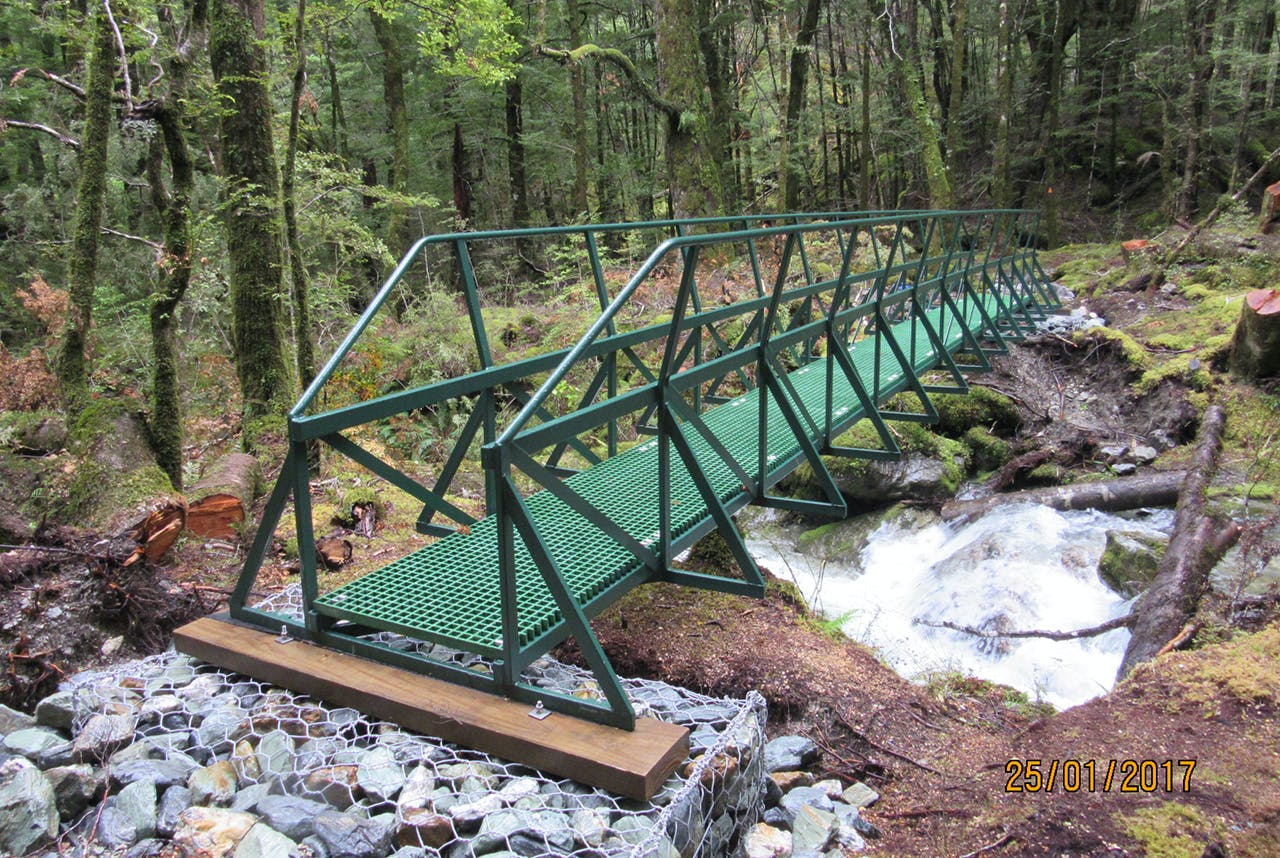 One of the new bridges on the Dart Track. Photo: DOC

After several years of being closed, the Dart section of the Rees-Dart circuit has reopened.

The Dart Track closed in January 2014 after a landslide blocked a significant portion of the trail, forming a 3km, seemingly permanent, lake. The Rees Valley has remained open during the closure.

“It has been a long journey for DOC staff, and patiently waiting trampers, but it will be worth all the hard work to see people back in the stunning valleys, mountains, and rivers which form the Rees-Dart circuit,” DOC Wakatipu operations manager Geoff Owen said.

The circuit is a four- to five-day tramp, and because it is considered to be more challenging than the nearby Routeburn Great Walk, it typically attracts a more experienced tramping market, Owen said.

Work on the track included 2.7km of track rerouting, 111m of blasting, 13m of new stairways, and a 12m steel truss bridge.

One in three dodge hut fees in Egmont NP 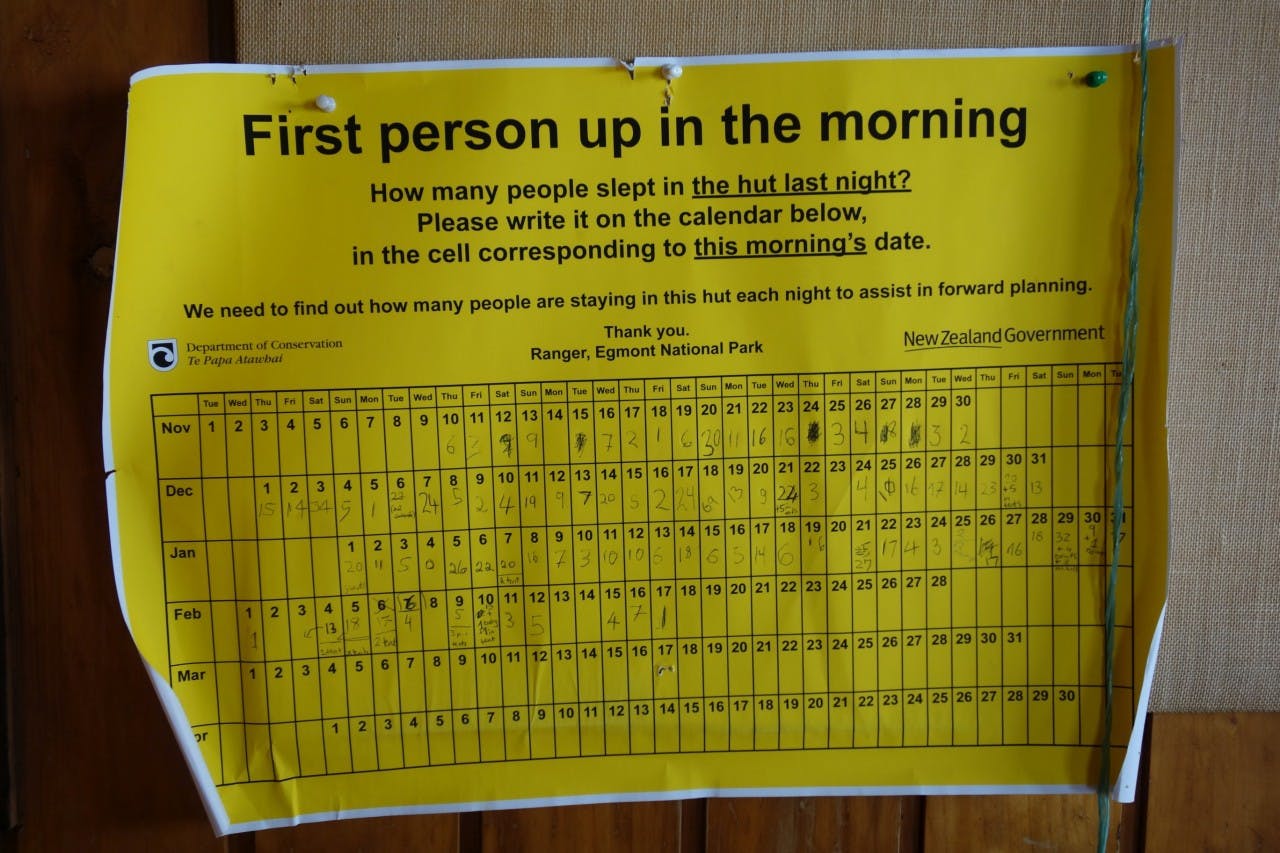 The occupancy calendars used in Egmont National Park show most people using huts are not paying for the privilege. Photo: Jonty Crane

A few DOC offices around the country are using a clever method for collecting information about hut use.

Known as occupancy calendars, they are bright yellow notices posted in huts, asking the first person up in the morning to write down how many people slept in the hut that night.

Dave Rogers, senior ranger from Egmont National Park, started using them five years ago on the Pouakai Circuit. He got the idea from a ranger in Tongariro, who heard about it from a DOC office on the South Island.

During peak periods, the calendars are put up in Holly Hut and Pouakai Hut.

“It’s giving us better information as to how many people are actually in the huts. And from that we can determine whether the huts are still fit for purpose; whether we’ve got more people staying there than the hut can realistically accommodate,” Rogers said. “You could have a 16-bunk hut and end up with 20 or 30 people consistently using it.”

“Hut books are just a waste of time in terms of collecting information. They’re valuable for search and rescue, but there’s not much retrieved from them because half of them end up as firelighters in the huts, or for keeping scores for card games,” he said.

While the calendars help DOC know actual bed nights, the     numbers also show them that people still aren’t always paying their hut fees. Rogers said the noncompliance rate is about 30 per cent.

“The whole idea of the hut ticket system was to be self-policing, unfortunately, people don’t really want to confront people about that. And maybe this is just a way they can do it in a less confrontational way.”

While they now have several years’ worth of information, Rogers says DOC hasn’t yet analysed the usage to make any changes. 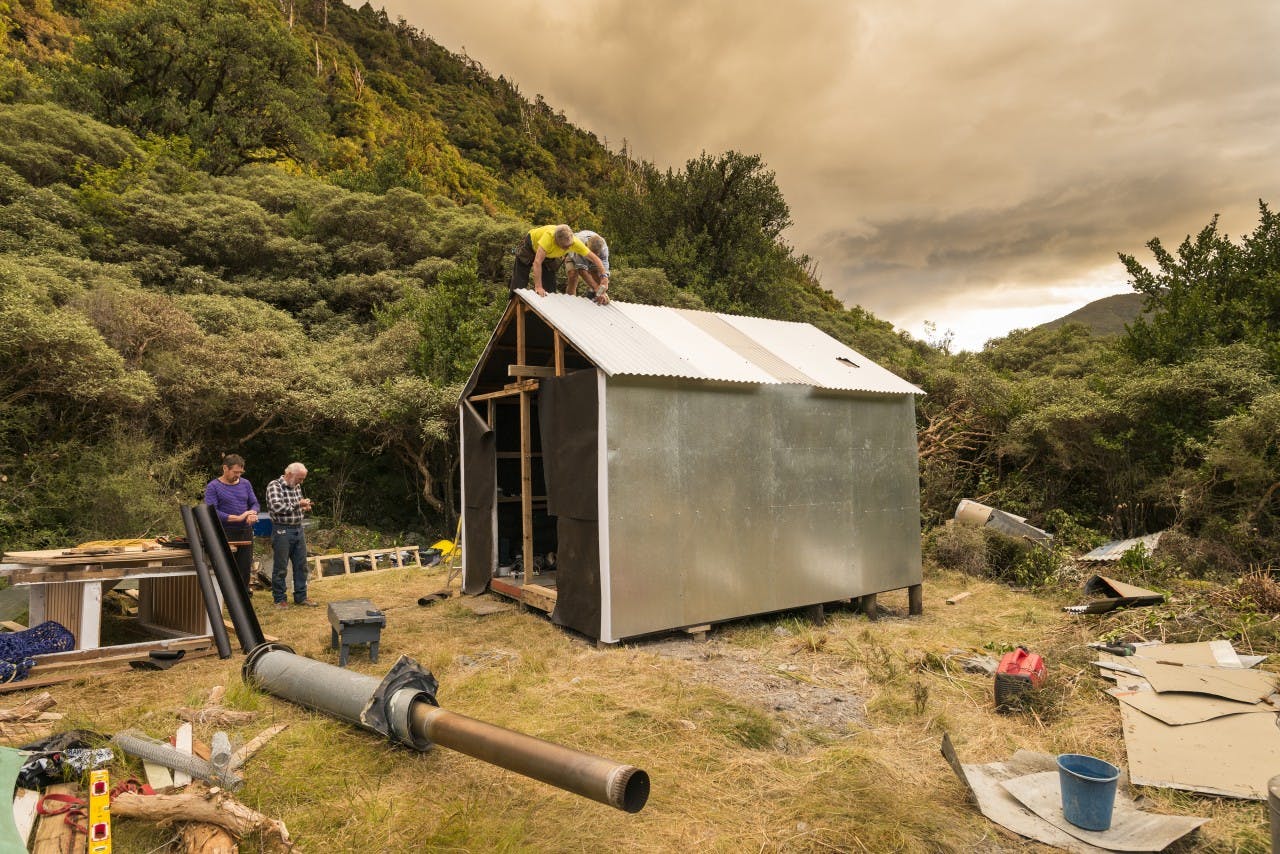 Newton Creek Hut, in the Arahura Valley near Hokitika, has received a thorough makeover.

Builder Eric Saggers, ex-Arthur’s Pass ranger John Charles and Peter Mortlock did seven 12-hour days to get the hut back into shape. They were joined by Permolat members Andrew Buglass and Joke de Rijke over the weekend to help with the painting and repiling work.

The hut had a serious rat infestation that started in about 2012, and, combined with a leaking roof, was all but ruined over the intervening years.

Rob Brown applied for funding from the Outdoor Recreation Consortium to fund the rebuild. He said the hut is in a “magic spot”. Nearby Newton Creek is also an ideal whio/blue duck habitat.

“The hut is easily accessible in a weekend trip up the Arahura River Valley,” Brown said. “Many people also use the Newton Saddle route as part of a West Coast finish to the classic 3-Passes trans-alpine tramping trip.

Thanks to the efforts of the small team, it’s a place that can expect a steady flow of people to this part of the West Coast.

We’re looking for an advertising sales manager to join our team.

Opportunities like this don’t come by every day, so if you want to work on the best outdoor magazine, you’ll need to be darn good at your job. You’ll have a proven track record in sales – preferably in magazines or other media.

You’ll enjoy meeting people and have the confidence to develop new areas of business, meet face-to-face with advertising agencies and the magazine’s direct clients.

We expect our people to be self-starters and to be able to quickly assume responsibility for their role.

The position is based in Auckland, where you’ll be part of a small team working in a warm, friendly office near the Tamaki River.

Apply for the job here: http://bit.ly/wildsales