The beautiful frontier town of Glenorchy sits in the shadow of Mt Earnslaw and is an ideal base for wilderness walks.

John Travolta famously said of Glenorchy, ‘The views are literally breathtaking, this is where God lives.’ It’s also where Lord of the Rings fans can gleefully rediscover the elfin forest of Lothlorien, the golden tussock heights of Isengard, the peak on which Gandalf slew the Balrog and Mt Earnslaw’s snow-capped summit known as Methedras.

Travolta is right, in a way, because the area around Glenorchy is called Paradise, some say after the multi-coloured paradise shelducks that alight on the golden tussocks, but also simply because of its beauty. Paradise has many inspirational vistas that are curiously familiar as it has been the movie set for box office hits such as Lord of the Rings, The Hobbit, Prince Caspian, Vertical Limit and Wolverine and the television series Top of the Lake.

Glenorchy provides a tranquil environment for those who simply want to enjoy the brisk mountain air. There is a range of outdoor activities, dining options and accommodation.

The town sits on the shores of Lake Wakatipu, which, mysteriously, rises and falls at the rate of 12 centimetres every five minutes. The explanation could be that changing atmospheric pressure causes a lake seiche or oscillation of the surface water. A more colourful cause could be the beating heart of the legendary giant that Maori named Matau whose sleeping body reposes on the zigzag bed of the lake.

Out in the middle of Lake Wakatipu are three lonely-looking, uninhabited islands called Pig, Tree and Pigeon. They resisted the force of the Dart Glacier that gouged out the lakebed more than 10,000 years ago. The islands can be reached by guided kayak trips, or you can paddle your own way.

The history of Glenorchy is closely aligned with the veteran steamer T.S.S. Earnslaw, that still plies Lake Wakatipu. The twin-screw ‘Lady of the Lake’ entered service in 1912 and was state-of-the-art for its day, with fine kauri and red beech panelling in the saloons. She maintained a vital link for the tiny settlements of Glenorchy and Kinloch until the road from Queenstown was opened in 1962.

The ship had a major overhaul in 1984, which included glassing-in of the kauri decks and a full repaint, but she retained her steam engines and still does 14-hour days on the lake, now carrying tourists out from Queenstown.

In Glenorchy and its surrounds it’s easy to let the imagination run riot. Everything about the place has a feeling of being pristine, primeval and unspoiled. Enter this Gateway to Paradise and you will experience pure inspiration on every bend in the road and corner of the tracks you walk. 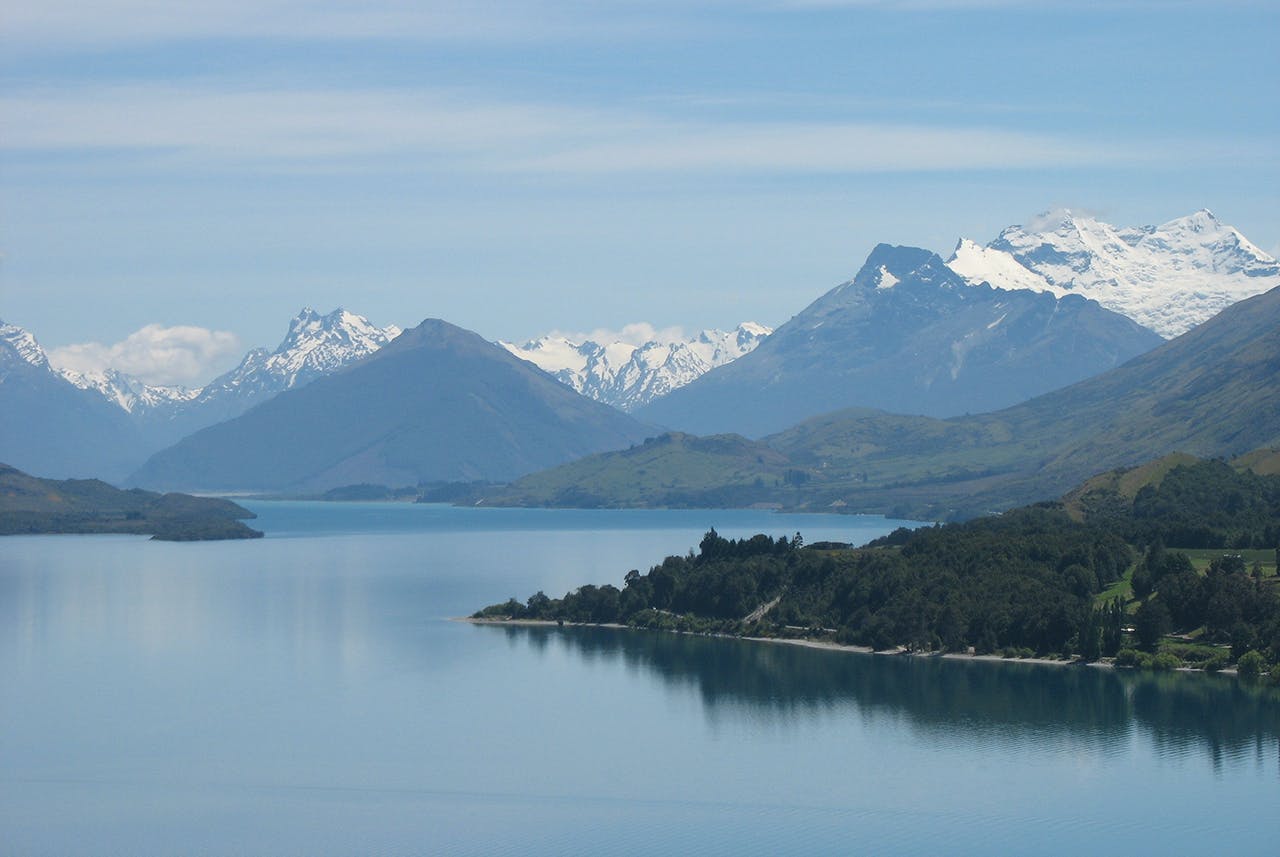 Routeburn Track: Rated as one of the ‘Top Ten Classic Hikes’ and lends itself to a pleasant day walk from the car park over a portion of the track. A full-day walk enables trampers to climb to Routeburn Falls and high above the valley for spectacular views and a feeling of utter tranquillity. A two-hour jaunt from the car park takes in the Bridal Veil Falls and the Routeburn Flats.

The full-day option begins at the Routeburn Shelter, which is a 20km drive on a partially sealed road from Glenorchy. The track is truly delightful in its early stages, winding through magnificent beech forest beside the Routeburn River.

Once past Sugarloaf Stream, the track climbs steadily to Bridal Veil Falls, well-named for the curtain of water that catches sunlight like a film of silk thread.

As it continues above the gorge the grade increases, but underfoot the track is excellent and the scenery is idyllic. At the 6.5km mark a swing-bridge leads onto grassy flats and the Routeburn Flats Hut and campsite.

The final climb of 2.3km to Routeburn Falls Hut can be completed in just over an hour, opening up bush-line views of the Humboldt Mountains and the entire Routeburn Valley. In every direction there are stunning alpine vistas that provide memories of a great day out.

Other walks in the vicinity of Glenorchy and the nearby Dart and Rees river valleys range from easy 1.5-hour jaunts to 10-hour alpine grunts, but all are incomparably scenic.

Glenorchy Walkway: Located in the township, is an easy one- to two-hour stroll around the environs traversing wetlands on boardwalks with views of Mt Earnslaw. There are good opportunities to see birdlife on the Glenorchy lagoon.

Diamond Creek Track: Follows the true left bank of this popular trout stream, taking 45 minutes each way on an easy track. On wet days the track becomes boggy en route to Lake Read, which has prolific waterfowl and superb views of the Dart Valley to Paradise. Access is off the Glenorchy-Routeburn Road, 15 minutes from town.

Glacier Burn Track: Starts 25 minutes from town, signposted from the Glenorchy-Kinloch Road. Although taking only two- to four-hours to the Glacier Basin, this is an advanced tramp, climbing through beech forest on the true left of the creek. It’s possible to follow the creek a little further for a view of the Humboldt Mountains.

Invincible Gold Mine Track: A steep three-hour climb that offers wonderful views of Mt Earnslaw and the Rees Valley. Built by miners in the 1880s, the track has interesting relics including a waterwheel and seven berdans – cast iron bowls for grinding ore. Access is 30 minute’s drive from town on the Rees Valley Road.

Scott Creek Track: An 8-10 hour grunt for experienced trampers, beginning just beyond the Dart River Bridge on Routeburn Road. The route is steep, following the creek bed at times and ending at a musterer’s hut on the bush-line. Beyond the hut is Kay Creek, which provides a wilderness route to the Caples Valley.

Sugarloaf-Rockburn Track: A 15.5km full day loop that traverses relatively easy terrain. It starts at the Routeburn Shelter car park and returns to the Routeburn Road via the Lake Sylvan Track. Near where the old Rockburn Hut was located, now a day shelter, is a monumental chasm, pebble beaches, swimming holes and astounding views. Camping in this pristine alpine world is possible at the Lake Sylvan DOC campsite.