When one is Auckland-based and has children, being a weekend wilderness warrior can sometimes be difficult. Fortunately Auckland has a surprising number of wild gems hiding in plain sight and both our boys can now carry 40l packs for a full day without whining – much. So, as summer approached, we boarded the ferry to Rangitoto and set off for the Home Bay campsite on Motutapu Island.

We disembarked at Rangitoto Wharf and joined the pilgrimage up the Summit Track. Most day walkers steam right up this track, take a couple of photos at the summit and race back down to make the midday ferry back to Auckland.

This mother, however, regards tramping at a child’s pace as one of the perks of parenthood. So, instead of racing for the summit, we stopped at every interpretation sign on the pretense of becoming more educated about the island’s ecology, then veered off towards the lava caves about 20 minutes shy of the summit. There we got out our torches to explore the caves before enjoying a leisurely morning tea.

From the caves, we sidled around the Loop Track to the Summit Road. This is one of my favourite areas on Rangitoto. The deeper soil is reflected in the increased diversity of vegetation, and I have heard the raucous call of the endangered tieke (saddleback) here every time I have visited since they were released onto the island only a couple of years ago. We marched down the dusty scoria road to Islington Bay, four abreast, in an hour.

From Islington Bay Wharf we followed the gorgeous little coastal path that winds around the foreshore to the causeway that joins Rangitoto and Motutapu Islands. Halfway along, we stopped for lunch and a dip at a lovely little beach sheltered by a small grove of mangroves.

Across the causeway, we turned onto the poled Rotary Track that meanders over pasture from Islington Bay to Home Bay. Once on the ridge, we were treated to breathtaking views over the sparkling waters of the Hauraki Gulf from the city to Great Barrier Island and the Coromandel. After almost two hours of afternoon ridge top wind, however, it was nice to drop into the shelter of Home Bay, set up our tents and make dinner. 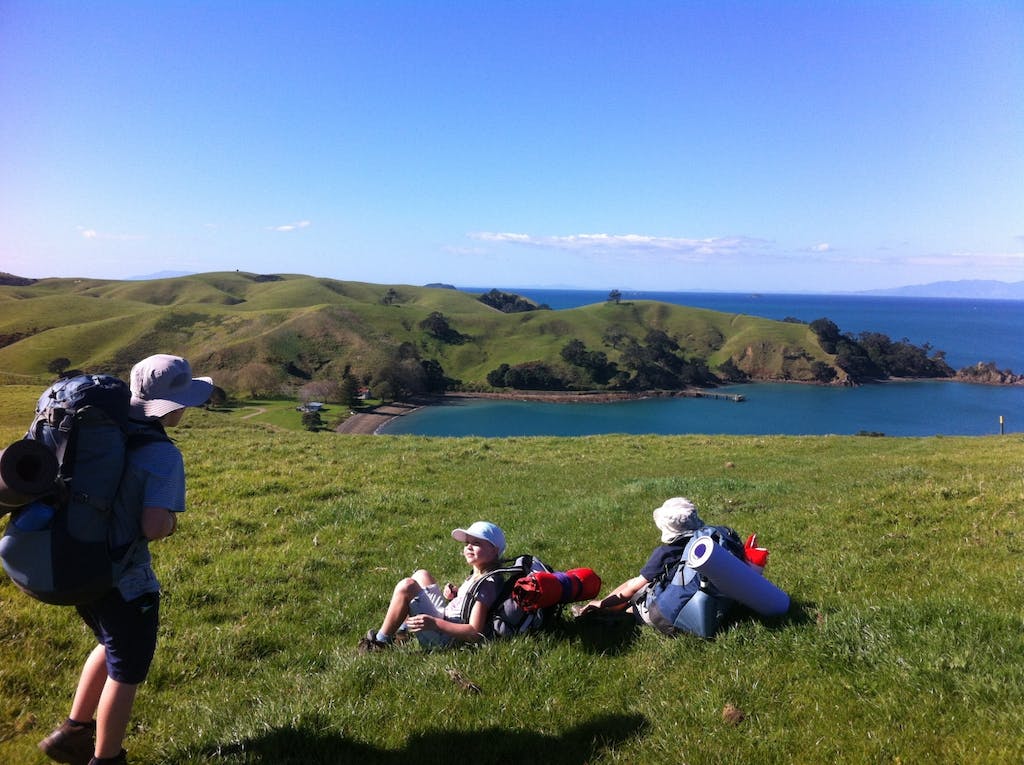 After dinner we wandered down to the other end of the beach, each with a mug of hot chocolate. Here, the historic 1901 Reid Homestead tucked into the corner of the bay evokes some of the more recent history of the island, although the children were more interested in trying out the rather cool swing that hung over the beach from a large fig tree.

It was dark by the time we got back to our campsite, and I heard the two younger kids chatting in their tent for all of two minutes before their voices died away and the only sounds were the waves lapping the pebbles on the beach, punctuated by an occasional morepork call.

Next morning, we returned to the causeway via the Rotary Track again, then headed back to the main Rangitoto Wharf via the Coastal Track. Despite the lava rocks making it sufficiently bumpy underfoot to warrant boots with ankle support, this leafy and seldom-used track was a real treat and, I imagine, much nicer than the hot and dusty road would have been. We ran into a volunteer baiting traps to catch any kiwi-eating stoats that managed to swim from the mainland. Then, near the wharf, the track ran past what is apparently the largest black back gull colony in New Zealand, which was alive with spring activity.

At the wharf, the boys taught their friend to play bridge and I made a chai latte while we waited for the ferry. When it arrived, we boarded and had just enough time for another couple of hands of bridge before we were back in bustling central Auckland 30 minutes later.