With a dry, sunny and reliable climate, a dramatic landscape, and widespread evidence of a romantic gold-rush past, Central Otago offers unique opportunities for the adventurous wanderer.

A case in point is the Carricktown Track, winding its way 15km down the flanks of the Carrick Range. It leads into the silent, wide-open hills and down (some 800m) past old mine workings and relics.

My preference is to complete the track from top to bottom, for this provides the best views – north to Lake Dunstan, south to the curiously named Horn and Old Woman ranges, west for an unusual perspective of the back of The Remarkables, and east across an endless expanse of craggy mountains.

After being dropped off at Duffers Saddle (1173m), the highest point on any public road in New Zealand, I joined the Carricktown Track, bearing left almost immediately at the large rocks. Watts Rock (1302m) is the highest point on the track and from here the 4WD trail is easily followed, albeit peppered by deep ruts, an unformed surface and washouts.

The Otago tops can be bitterly cold, even when it’s scorching in the valleys. On previous trips I’ve had to rug up in full battle dress to fend off the big chill. But this day was warm and cruisey.

I ambled along the tops, imbibing the superb vistas. There’s a sense of solitude up here as well as space.

I stayed on track, ignoring the various side tracks, and was soon crossing the old mining-era water race still used (for irrigation) today. At about 5.5km, I reached a sign directing me down (1km, 15min) to the massive waterwheel of the Young Australian Mine, very much worthy of closer inspection. Restored in the 1990s, the 7.9m wood and iron wheel was dragged up the mountain in 1874 to drive a 10-stamper battery. The battery’s remains are on the opposite side of the gully. There is a couple of stone huts nearby, perched precariously on the hillside. An interpretation panel explains the workings.

This area was not rich with gold, but that didn’t stop hundreds seeking their fortune here. The Young Australian was no bonanza. The Star and Heart of Oak mines, just up the hill from Carricktown, were the most productive, and it was the nearby Elizabeth Mine that started the area’s  mini-rush in 1869. Mullock heaps, battery foundations, rock walls, tailings, sledge tracks, and two well-preserved stone dams are stark reminders in a desolate landscape of the activities in the past. Be aware of collapsed mine shafts; many are obscured, so stick to the track.

Carricktown sprang up at the start of the 1870s. There were once three pubs, several stores and plenty of miners’ huts. The track goes through the old main street, lined with stone ruins, including those of a bakery, smithy and hotel.

Continuing down the hill, I reached the gated end of the track, the site of another town called Quartzville, originally set up to service the mines further up the hill, but quickly abandoned when Carricktown was built. I turned right and made my way to Bannockburn via Quartzville, Gully and Schoolhouse roads.

You can do a lot worse than finish your journey at the Bannockburn Domain. Managed by the local publican, for a few dollars a night you can pitch your tent and indulge in unlimited showers and use of the washing machine. Then cook up a storm in their timeless 70’s style kitchen. 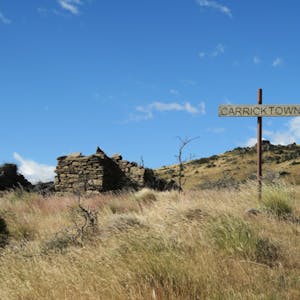 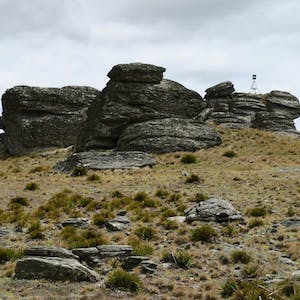 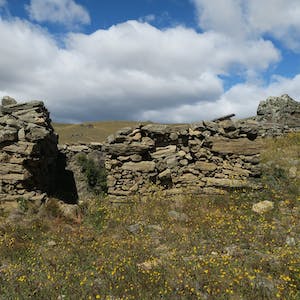 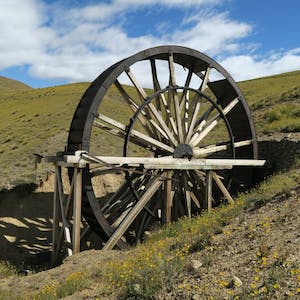 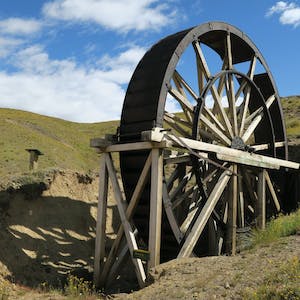 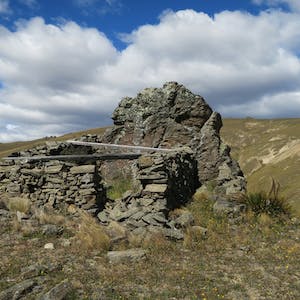