The ride from Kaiteriteri to Tasman might be the most scenic section of the Great Taste Trail.

When I heard the most scenic section (to date) of the Great Taste Trail had been completed, I had a sudden urge to grab a bike and give it a try.

The stretch from the village of Riwaka to the beach paradise of Kaiteriteri officially opened in October last year. It completes the coastal section of the trail – the full stretch incorporating numerous cafés, pubs, restaurants, the odd brewery and a short but sweet ferry journey.

The forecast was for persistent rain from early afternoon, so my friend Eva and I decided to start in Kaiteriteri to enjoy the most scenic stretch while the weather was good.

We set off from the beach. The sea was calm, the tide was in and the lagoon was full and inviting. We crossed the bridge and turned right along Martin Farm Rd before veering left up a track underneath the Kaiteriteri Mountain Bike Park sign.

This park has tracks for beginners and advanced bikers. Our track was at the easy end of the spectrum but, not being regular cyclists, it was a bit of a grunt zigzagging our way up the hill through pine forest.

It was a relief when it flattened out and gaps in the trees allowed us to stop and take photos of Tapu Bay. We passed numerous cycle tracks heading in all directions but the blue Great Taste Trail signs pointing to Motueka were easy enough to follow.

Before long we zigzagged downhill towards the road, under which the track ducked through a tunnel before continuing up a slightly uncomfortable hill with the ocean to our left.

After this is a glorious descent to the flats of Riwaka; following the coastline at first, then across the new bridge over Riwaka River into an orchard.

We cycled through the orchard, then followed the main road into Riwaka before continuing down School Rd, turning right along Lodder Lane and turning left when rejoining the main road.

A designated cycleway took us over the narrow bridge crossing the Motueka River, delightfully separate from the traffic and, as we approached the 50km/h sign into Motueka, we hung a left down Staples St to a lovely stretch of coastline, where the track runs parallel to Motueka Sandspit – a popular spot for birdwatchers hoping to see bar-tailed godwits and other shorebirds. 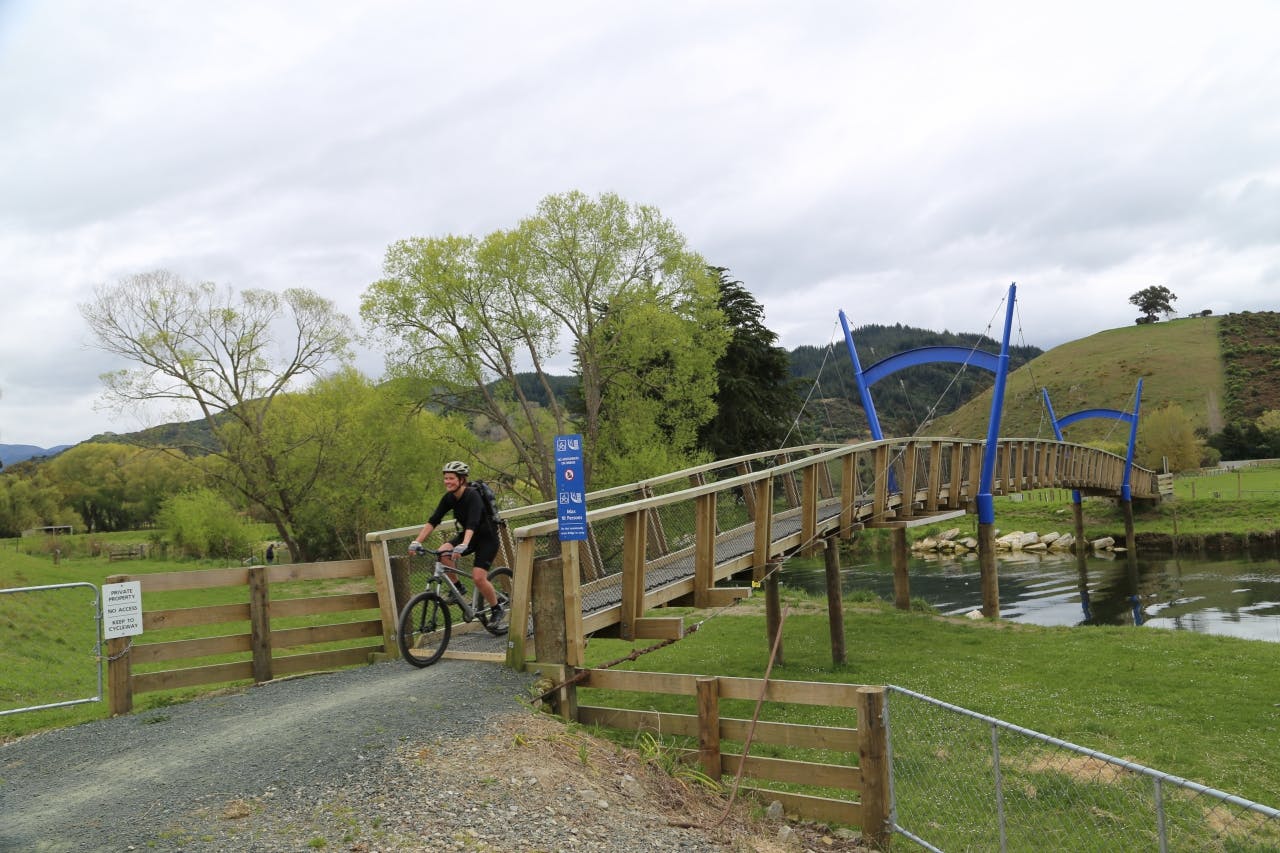 Crossing the new bridge over the Riwaka River

The trail follows Motueka Quay, passing the rusting remains of the Janie Seddon, before veering right along Old Wharf Rd. The official trail continues to High Street, but we headed left immediately after the cemetery along a track which follows the edge of the estuary. It then bends right, following Wharf Road to a roundabout.

The next section, heading towards Lower Moutere was the least pleasant of the day, following a main road with little charm, especially as the Arthur Range was covered in cloud. But we soon reached Riverside Community Café – a serene place to enjoy a drink. It’s good to have a break here because, if you’re not used to cycling, the next section takes the wind out of your sails.

Unlike the mountain bike park earlier, these tracks weren’t designed for cyclists, and are considerably steeper and took us by surprise. Lactic acid was burning my thighs as I reached the top (there’s a long drop toilet at the highest point for those who have really strained to reach it). The surrounds are pleasant with paddocks, ocean views and, under normal circumstances, a great vista of the Arthur Range. But the weather was starting to close in and we needed to crack on.

It wasn’t long to Harley Rd and, subsequently, a fantastic reward for all the previous hard work. I barely had to pedal as I rocketed downhill with a refreshing breeze cooling my hot red face.

As the road bent to the right to join The Coastal Highway, we forked left and continued for another 300m or so before a track led right, ducking through a beautifully painted tunnel under SH60 and heading into Tasman village.