Wherever your tramps take you this summer, from coast to mountain, impress your companions by easily identifying these birds

The kea is the only true alpine parrot in the world. Instinctively curious, it is attracted to people whenever they enter their alpine world and is often a prominent feature at South Island ski fields and backcountry huts. They were disliked by early settler farmers who reported them perching on the backs of sheep and digging through the skin and muscle to reach the fat around the kidneys. They are one of New Zealand’s true real character birds.

Keas are large and strong flying with olive green colouring and a slender grey-black bill. The under-side of their wings is a brilliant scarlet red. A similar bird is the kaka but this is slightly smaller, olive brown and seldom seen above the bush line.

Sightings Only found in the South Island from Farewell Spit to Waitutu in Fiordland and in the Kaikoura Ranges. They can inhabit areas from coastal dunes to high alpine peaks but are more synonymous with the alpine  environment.

Interesting fact The bounty paid for hunting kea to protect sheep was only outlawed in 1971. 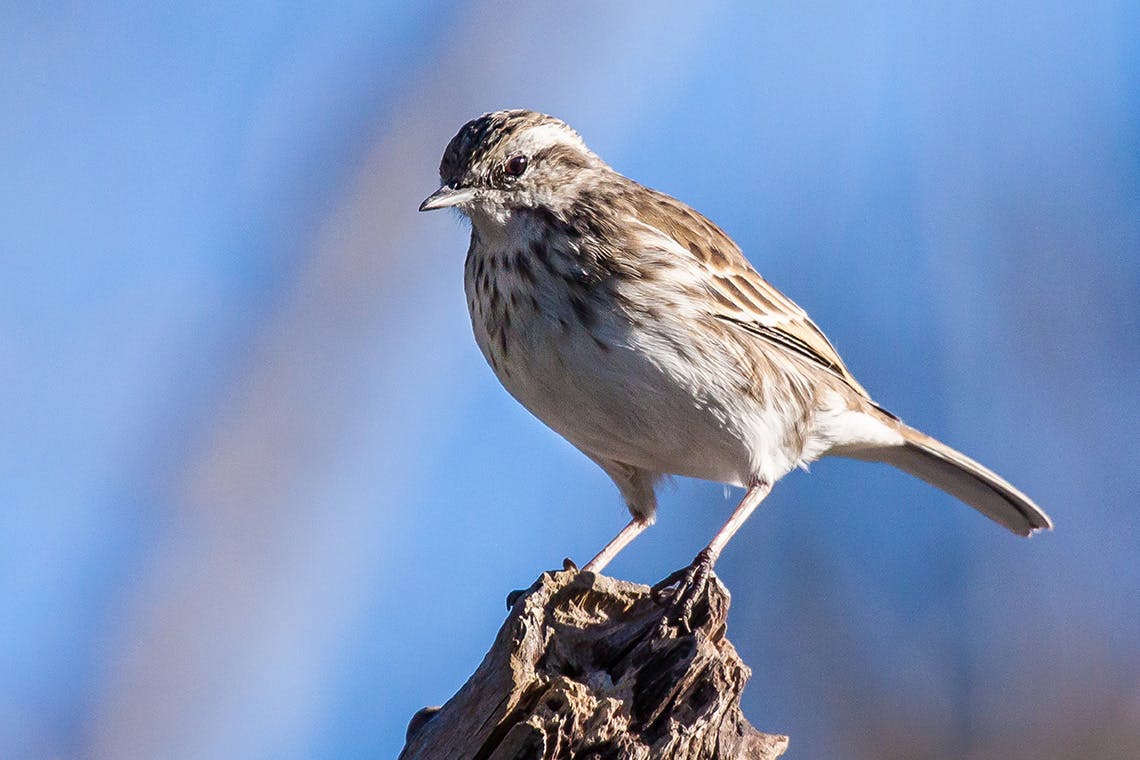 The pipit is widespread throughout New Zealand. Photo: Matt Winter

The New Zealand pipit has most likely been seen by many trampers but not recognised as such because their appearance is so similar to the common skylark. The most recognisable difference between the two is that the pipit lacks a crest of feathers at the back of the head. Pipits can be approached relatively closely, being quite a confiding bird and will walk away just in front of you (rather than fly) keeping a safe but close distance.

They are streaked grey-brown above and off-white below with brown streaks on the chest. The eye has a prominent pale eyebrow stripe. Like most birds of the ‘wagtail’ family, pipits characteristically flick their tail when they walk.

Sightings Though not strictly an alpine bird, the pipit is widespread throughout New Zealand and range from coastal and river areas to farmland, right up to tussock and alpine areas. They prefer rough, open habitats but will vacate zones that have been overtaken by heather. 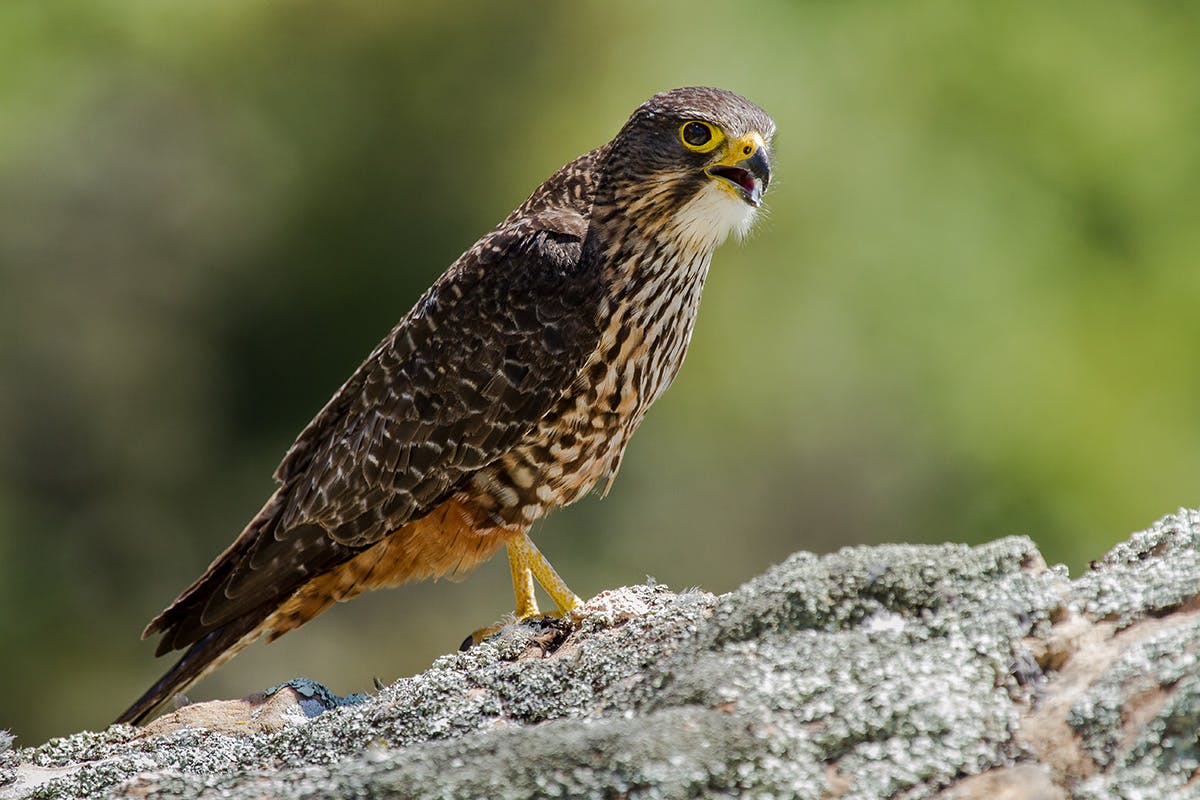 Karearea can reach speeds of up to 230km/h. Photo: Matt Winter

Smaller than the harrier hawk and with less of a wingspan, the karearea is a phenomenal aerial acrobat easily able to keep up with the fastest of prey species. Incredibly aggressive, karearea will more often than not make contact on any person silly enough to threaten their nests. When they do so they hit the head with an outstretched foot raking with their talons.

Roughly the same size as a magpie, the karearea is largely dark brown on the back with a cream chest flecked with lovely rich brown dots, streaks and speckles. Legs and eye ring are yellow while the face has a distinct almost ‘Mexican’ style moustache running vertically down from the back of a strongly hooked bill.

Sightings Though not strictly an alpine bird, the Karearea are widespread and adaptable. They can live in a variety of habitats from the coast to alpine areas including native podocarp and beech forest, tussock lands and commercial pine forests. 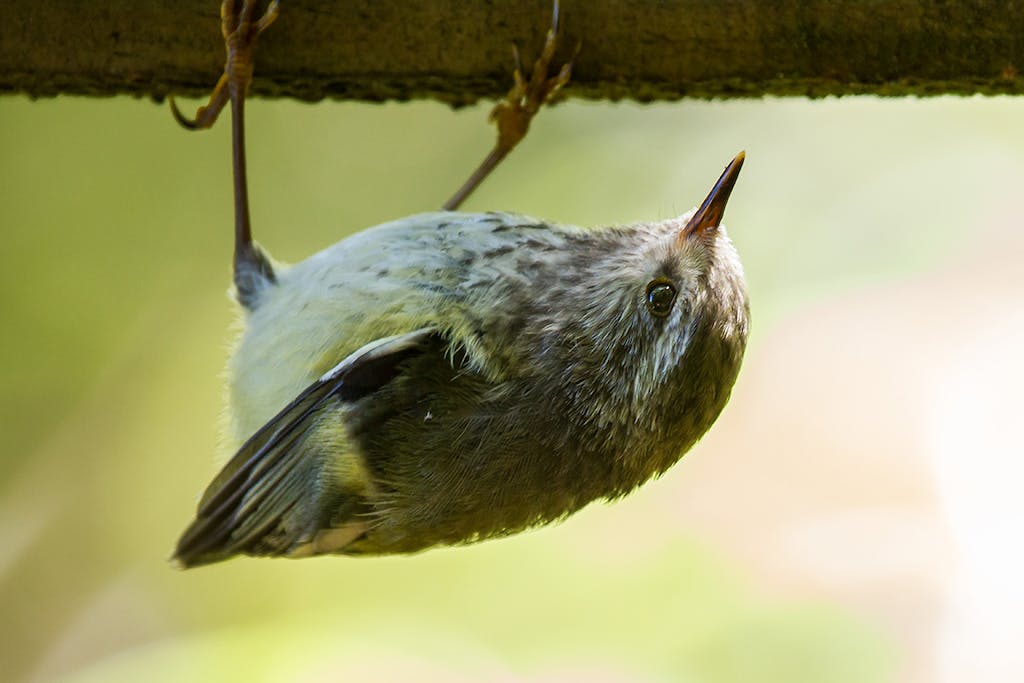 The rifleman is a delightful forest dweller. Photo: Matt Winter

These delightful little forest dwellers are New Zealand’s smallest bird. They are constantly on the move with a characteristic ‘wing flicking’ movement while foraging up and down tree trunks. Their high frequency ‘zips’ and ‘pips’ are often the first clue to a rifleman being nearby and it is easier to pinpoint them using your peripheral vision to detect their constant movement.

Sightings Predominantly mature forests and mainly higher altitude areas in both the North and South islands. North Island distribution is patchy, being limited to geographically isolated populations with only three populations north of Pureora Forest – Warawara Forest in Northland and on Little Barrier and Tiritiri Matangi islands. In the South they are less common on the east side.

Interesting fact Riflemen are a monogamous species with long-term pair-bonds, only replacing a mate if one of them dies. 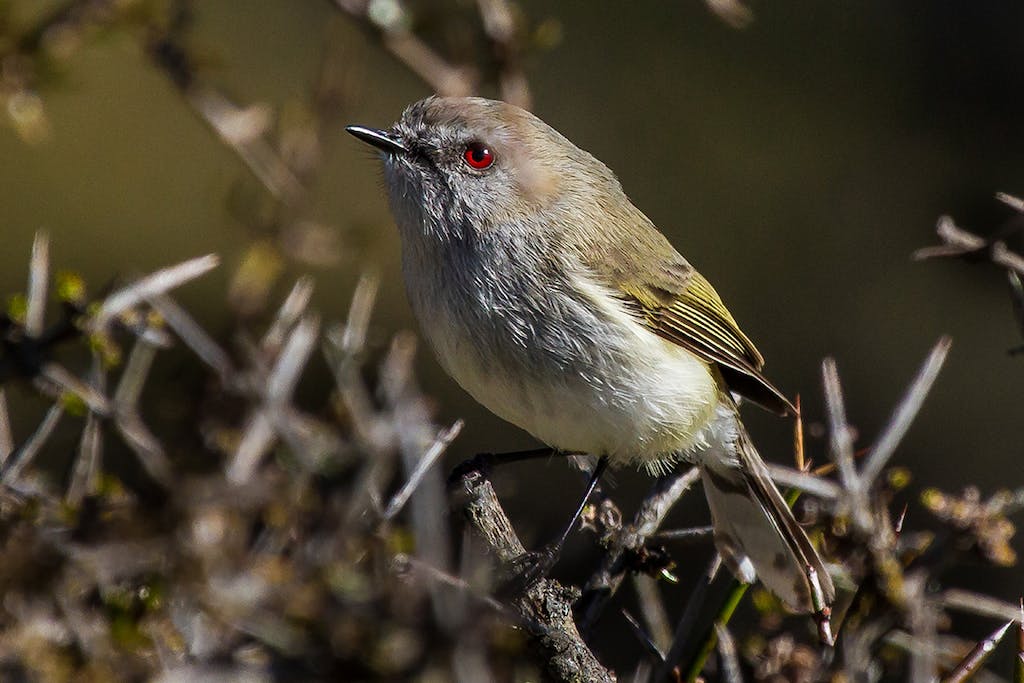 At 6g, the grey warbler is one of the lightest in New Zealand. Photo: Matt Winter

The grey warbler vies with the Rifleman for the country’s smallest bird – both can weigh a mere 6g. They are New Zealand’s most widely distributed endemic bird having been able to maintain their distribution in pretty much all habitats, (rural and urban), despite human colonisation. They occur wherever there are trees or shrubs.

The grey warbler is an olive-grey colour above with a grey face and off-white under parts. Legs are black and very slender and the bill is fine and pointed. Its one outstanding feature is its very bright and vivid red eye.

Sightings Living throughout New Zealand they are usually found only in woody vegetation at mid to high levels in the canopy, making sightings difficult. They usually associate in pairs (and not always close together) which adds to the observation difficulties.

Interesting fact Grey warblers often harvest insects from the outside of the canopy while hovering, something no other New Zealand bird does. 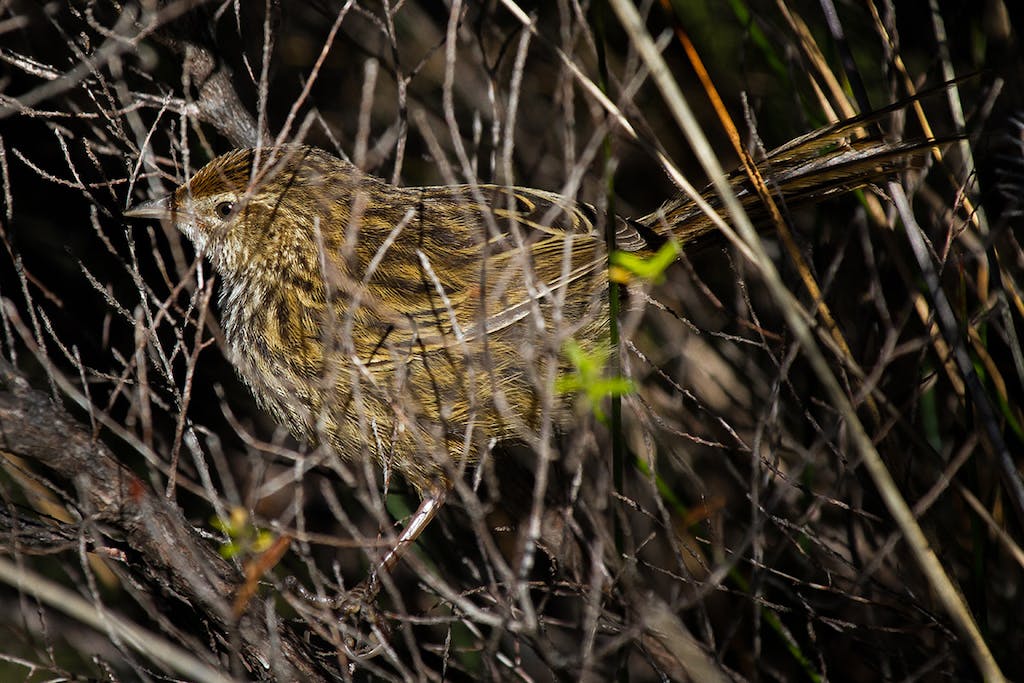 Although widely distributed, the Fernbird is far more often heard than seen. They are secretive, preferring to live amongst tight and thick trees, shrubs, scrub and reeds and act much like mice in the way they scramble through the dense foliage. However, they do on occasion approach observers closely, especially in response to mimicked calls.

Fernbirds are a sparrow-sized bird ‘streaked’ brown above and pale below. This lower pale area is ‘dotted’ with dark brown flecks. The tail is relatively long with a decidedly tatty look to it.

Sightings Throughout New Zealand but absent from southern North Island and Canterbury. They occupy dry shrub land habitat and tussock areas to low wetland areas but always in dense and tight vegetation. 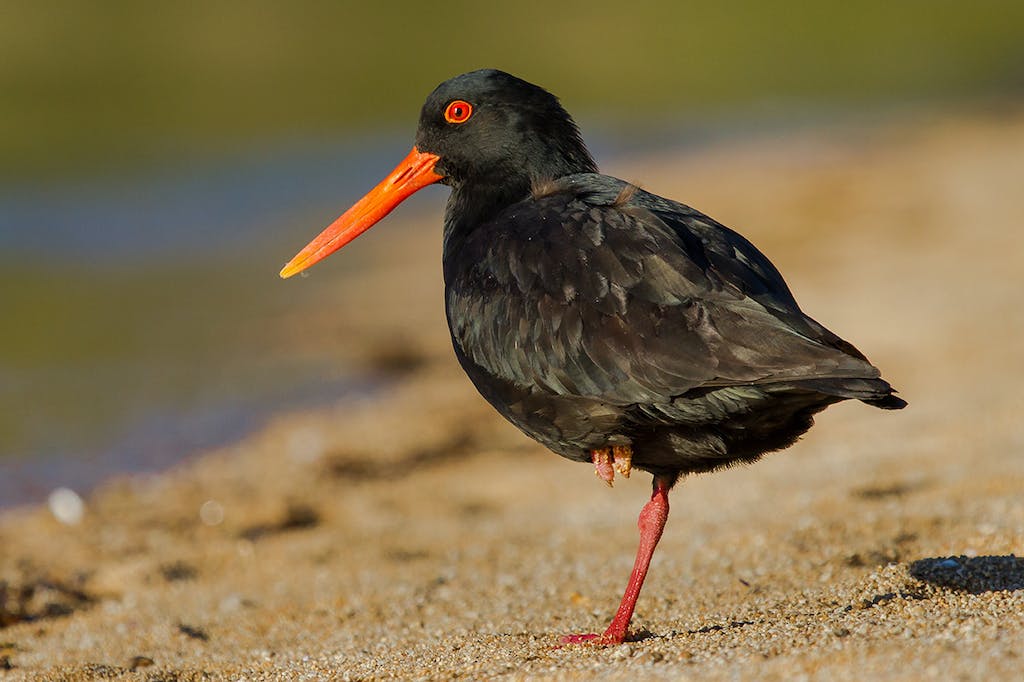 The variable oystercatcher can be found all around the coast. Photo: Matt Winter

Variable oystercatchers are often seen in pairs busily fossicking and probing for shellfish, invertebrates and molluscs along beaches or estuaries. They can be quite aggressive towards humans around breeding time with loud screeching dive bombing (sometimes with contact) not unusual.

The variable oystercatcher is a predominantly black, heavily built bird with a long, very conspicuous bright orange bill and strong pink legs. The other obvious and quite striking feature is their vivid red iris and orange eye ring. Being similar in size and shape to the South Island pied oystercatcher they are commonly mistaken as being two colour phases of the same bird – in fact they are two different species.

Sightings Around much of the coastline of New Zealand, including Stewart Island.

Interesting fact Variable oystercatchers favour bivalve molluscs which are opened either by pushing the tip of the bill between shells and twisting or by hammering. 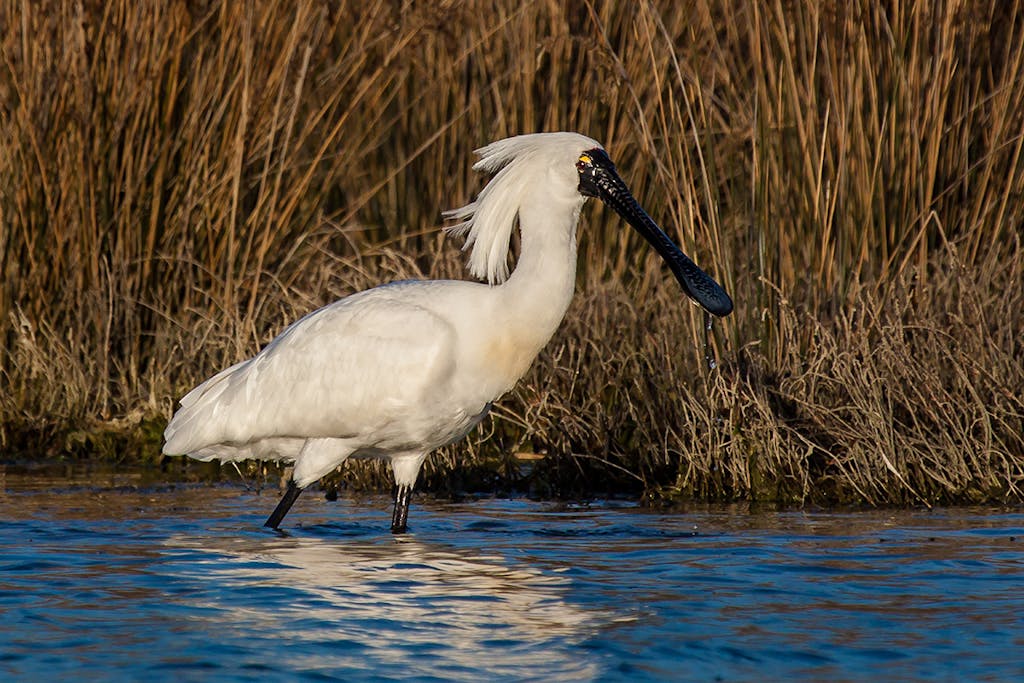 An unusual looking bird, the royal spoonbill is a gregarious creature usually seen in small groups feeding along the margins of shallow brackish coastal lagoons and tidal estuaries. When feeding, spoonbills walk along in shallow water using their spatulate or spoon shaped bill (slightly open) in a smooth sideways sweeping motion using the water movement to gather and filter out the small invertebrates, fish and frogs that they consume.

‘Spoonies’ are an elegant bird similar in size to the white heron, for which they can be mistaken when seen at a distance. The spoonbill is slightly ‘chunkier’ with a black bill and legs. It also has a crest of feathers at the back of the neck or nape which grows up to 20cm long in the breeding season. Breeding birds also have a bright yellow patch above their dark red eye.

Sightings Lives and breeds in both main islands; distributed widely after the breeding season. Most birds inhabit estuaries preferring fresh to salt water but happy in either.

Interesting fact Groups of birds tend to fly in V-formation like geese. 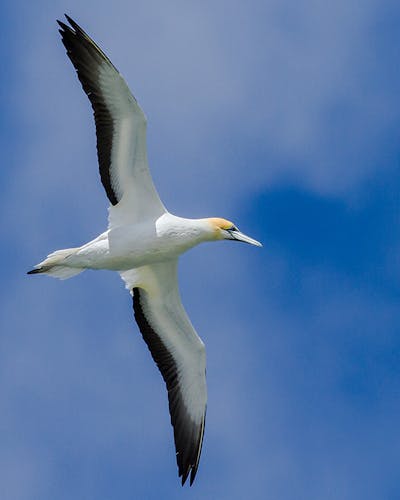 This magnificent bird can be seen soaring effortlessly on the wind currents as it looks for shoals of small fish for which it dives from a huge height. By stretching its wings out behind its body, it is able to turn itself into a streamlined torpedo for maximum penetration through the water.

It looks very much like a common seagull but is distinguishable by its bright yellow head and upper neck together with its much wider wing span which can reach 1.8m. The overall colour is white with the trailing edges of its wings and a varying proportion of its central tail feathers being black.

Sightings From most coastal locations throughout New Zealand with the largest mainland nesting site at Cape Kidnappers (5000 breeding pairs). Smaller sites at Muriwai and Farewell Spit.

Interesting fact A juvenile’s first flight from the nest will take it 2000km to Australia, returning after 2-6 years.