Access
Princhester Road, about 30km from either Mossburn or Te Anau SH94

My first inkling that this trip wasn’t going to go quite as planned was when I saw the sign at Lower Princhester Hut claiming it was eight hours to Aparima Huts. This was quite different from DOC’s website, which reckoned on it taking less than seven hours.

I had picked up on the fact that a new route down the western fringes of the Waterloo Burn had been put in as part of the Te Araroa Trail, but didn’t expect that to make much difference.

After a cosy night at the road-end hut, we set off along the track up the Bog Burn. The heavy snowfall six weeks earlier had taken its toll on the vegetation, and so the first half hour was marked by several strenuou 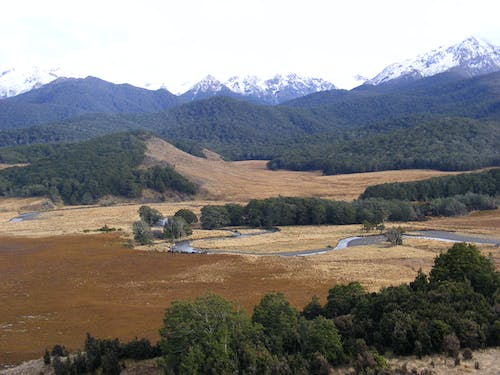 s clambers around, through or over fallen trees.

A 400m climb took us to the saddle, where a sharp drop and more fallen trees brought us to the first clearing in the head of the Waterloo Burn. Here, the new route diverged from the old, following what might be a fault line behind a series of large hummocks that screened us from the main valley. Other than installing orange markers, no track development has been done, so the ease of travel was dependent on the vegetation. In the bush, the understory appeared to have been well eaten; at other times we were forcing our way through crown fern. Out in the open, the travel was sometimes good but often required us to push through chest-high red tussock. The route also incorporated a lot more up and down than a valley route. None of this was a problem; it just wasn’t what we expected and explained the time difference.

We decided the most likely reason for the re-routing was to get more of the trip onto public conservation land, providing improved security of tenure and the ability to access DOC’s additional funding for Te Araroa. No doubt, plenty of use will see a decent ground trail develop and travel times improve.

At the point where the Aparima River emerges from the bush a sign indicates a track to its headwaters, with the other direction pointing us to our last climb before descending to Aparima Huts. The main hut is a cosy eight-bunk model, with its less-cosy looking predecessor nearby offering bunks for any overflow. With just five of us, the main hut was more than adequate and once the pot belly stove was lit we settled in for a convivial evening.

On Sunday, the ‘old’ route presented an opportunity for a round trip of sorts via Beckett’s Hut – another hut for me to bag. The morning was frosty, a fact rammed home when we had to cross the Waterloo Burn shortly after leaving the hut. A vehicle track took us past the larger boggy area on the valley floor, but when it ran out we were back in the deep red tussock, repeatedly crossing the stream’s meanders. The views are more extensive than the previous day, especially when the track periodically climbed away from the valley floor. A solitary orange pole, the only one we saw until we rejoined the Te Araroa Trail, marked the detour to Beckett’s Hut, a tidy Forest Service four bunker set just inside the bush. If we weren’t on the lookout for it, we could easily have carried on past.

As the valley closed in and started to rise more steeply, the vegetation on the flats become increasingly scrubby, slowing travel. If there was previously a marked route here, then its removal means that every party finds its own way and any ground trail has probably disappeared. Finally we climbed onto a terrace and recognised the valley ahead from the previous day. Soon we were retracing our steps over the saddle and out to Lower Princhester Hut. 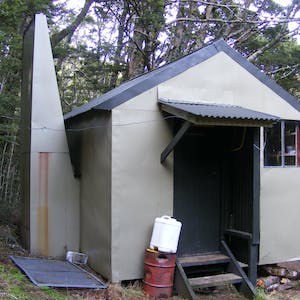 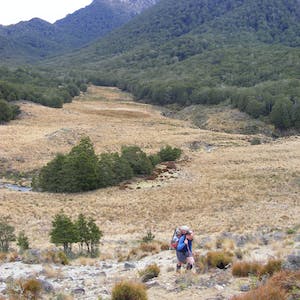 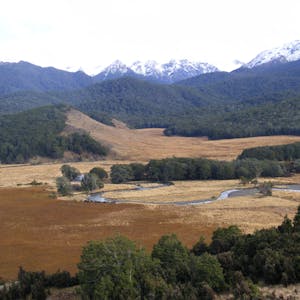