While most people take four days to walk the Kepler Track, 78-year-old Ray Willett does it in a day. Alina Suchanski meets the man who defies age by continuing to amaze with his fitness, stamina and mental agility

Ray Willett is a bit of a legend in Te Anau. At 78 he still cycles, climbs and hikes in Fiordland National Park. An activist, environmentalist, eccentric and climber from way back, Milford, Hollyford and Humpridge Track guide, tireless community mover, shaker and supporter – these are just some words that spring to mind in relation to the man whose association with the area goes back more than half a century.

Originally from the UK, Willett came to New Zealand in 1953 as a 16-year-old. His love for Fiordland began three years later when he embarked on a motorbike tour of New Zealand which took him from Auckland to Milford Sound. He came back for the 1958-59 summer to take a job guiding on the Milford Track.

This is where he was introduced to climbing by fellow Milford Track guide, Zygmunt (Zyggy) Kępka.

He recalls his first climb, up Mt Hart (1769m): “It was a beautiful, fine day. There is one steep section, only a few metres, and my knees were knocking. I was hanging on to this sheer tussock, seeing Quintin Hut way below between my feet, but Zyggy never noticed it. By the time my knees stopped shaking he was way ahead of me.”

In 1961, while working at the Chateau at Mt Ruapehu, Willett met his future wife, Helen. At the end of the winter season, they came to Te Anau to work on the Milford Track. The Willetts managed Pompolona Hut, then ran the Lake Waikaremoana motor camp in Te Urewera National Park for five years. But the grandeur of Fiordland lured them back for good in 1970.

A member of the Fiordland Tramping and Outdoor Recreation Club, Willett has a quirky sense of humour and zest for life many younger individuals might envy. At 65 he was the oldest person to complete the 2001 Coast to Coast race in one day, for which he was awarded the Endurance trophy. 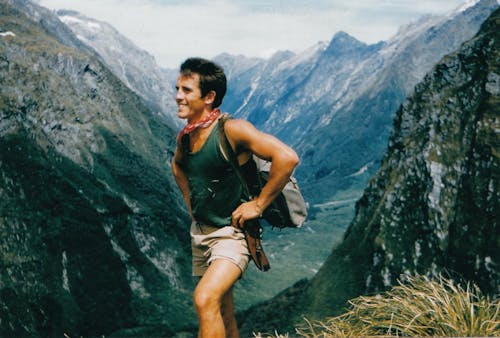 And endure he does. The last few years have seen him climb Mitre Peak (1683m), complete an eight-day Outward Bound course, walk the Hump Ridge, Kepler and Milford tracks multiple times, and participate in the Milford Classic 120km cycle race.

His incredible fitness is matched by his mental agility, which he claims to maintain by memorising and reciting poems, another skill for which he is world-famous in Te Anau.

Willett, who has competed 25 Kepler Challenges, has finally retired from this alpine endurance race. December 2013 was his last Challenge, and although he completed it in 12hr40min, eight hours behind the winner and missing the 12 hour cut-off time, he was happy with his result.

“I came across the finish line with a big smile on my face, feeling as good as I’ve ever done in the last 24 races,” he says. “I was delighted with my performance. I’m as fit as I’ve ever been. I’m just slow, because I’m old.”

And there is no stopping him.

When Mal Law ran the Kepler Track earlier this year as part of his 50 peaks in 50 days fundraiser for the Mental Health Foundation of NZ, Willett joined him and contributed $1200 to the cause.

He admits that “nowadays it’s more a shuffle than a run”, nonetheless his never-give-up attitude is to be admired.

So what’s in store for Willet now? “I’m planning to climb Excelsior Peak in Takitimu Mountains with the tramping club,” he says, then lists other goals: “Abseiling down Harwoods Hole near Takaka and cycling over Percy Pass in Fiordland are also on my bucket list.”

Asked about what motivates him to take on these challenges, Willett replies: “My dad was a master craftsman who could fix Rolls Royce engines, but he never did anything adventurous in his life. I made up my mind early on that I had to enjoy everything I did in my life, or else I wouldn’t do it.

My advice to anyone wanting to do something daring is ‘Do it now!’.”