Pinnacles Hut is the most popular in the country. One way to make your overnight trip slightly more unique, and immeasurably more adventurous, is to tackle the Moss Creek Track which adds at least two hours to the trip and involves steep uphills, rutted and overgrown tracks, bogs and a stream crossing or two. To top it off, you still get to experience some of the kauri milling history the area is famous for.

From the car, we walked quickly along the wide level track, soon gaining the turn-off to Moss Creek. Here, a large sign stands in the middle of the track. Inattentive trampers have frequently taken this turn-off and found themselves walking to Pinnacles the hard way. If you see the sign, now is your chance to turn back.

The track meanders beside the river for a short while and then heads menacingly upwards. There’s a good 500m vertical gain to be made to reach the flat tops that mark this section of the Coromandel Range. At times we grasped trees and branches to help pull ourselves up. Occasionally, a hole in the bush appeared allowing us to gather our bearings and gaze down the Kauaeranga Valley, mostly marvelling at how little distance we had covered. 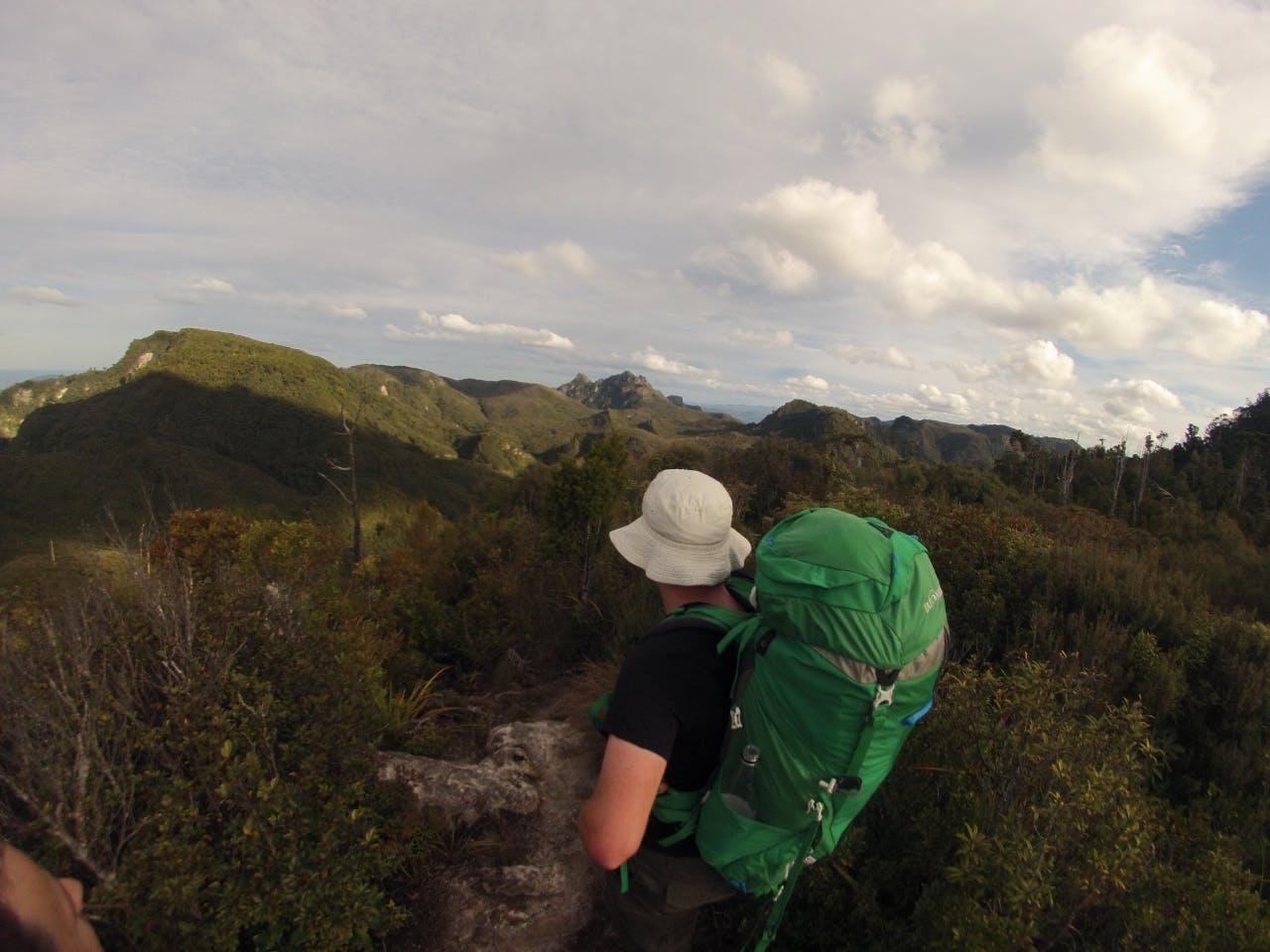 Eventually we made the tops, a mostly overgrown place with cutty grass dominating the side of the track. Moss Creek Campsite, an unattractive bog with platforms for pitching tents, is a little way inland, at the head of Moss Creek. We didn’t bother with the diversion, and instead continued along the track, which soon deteriorated into a route.

We were fortunate in that it had not rained recently, but even so we found parts of the route muddy and slippery. Old logs have been placed on the track, much like stepping stones in a river, to keep walkers above the worst of it. These proved a godsend, allowing us to quickly hop from one ‘stepping stone’ to the other.

The Coromandel hills are riddled with the remains of old kauri dams, the best of which can be seen on the main track to Pinnacles Hut. But even on this lesser trodden alternate route, there is a good example of the huge dams millers used to send logs crashing down the Kauaeranga Valley. The track passes right beside what is now a jumbled pile of timber but which still unmistakably resembles a dam and provides an interesting place for a break.

After traversing the tops for a couple of kilometres, the track bursts into a brief clearing offering a lovely view into the interior of the range and towards the Pinnacles. The track then begins its descent to the headwaters of Webb Creek and at times we’re sliding on our bums, stretching out with our legs to reach the next foothold.

We dropped down a spur, beneath, weirdly, power lines until landing at Webb Creek where we stopped for another break. Just downstream we could see the remains of another kauri dam.

The track widened and gently headed uphill, towards Pinnacles Hut with the power lines continuing to march alongside us. At one point we came out of the bush into a boggy clearing and had to hop along part-submerged logs to the other side.

But the hard work was done, it’s plain sailing along a gravelled path to the hut from here.

The next day we took the usual Webb Creek Track back to our car, pleased to have gone off the beaten path to complete a loop in one of the most popular walking areas in the country.