A note on eating rats

I certainly hope that Brando Yelavich (‘Wildboy takes on Stewart Island’, December 2016) has taught himself how to identify the different species of rat, which he says he is looking forward to eating. Most of the rats on Stewart Island/Rakiura are not ‘native’.

All three rat species found in New Zealand (kiore or Pacific, Norway, and ship rat) are present on the island, with ship rats being the most abundant and most pervasive species. Ship rats are found in all vegetation types and are pretty much the sole rat species present in podocarp forest. Norway rats tend to be more common close to watercourses (coastal and freshwater), wet areas and subalpine shrubland, while kiore dominate in manuka and riparian shrubland and areas of wire rush.

As ship and Norway rats are noted carriers of diseases such as leptospirosis and the cause of rat bite fever, I would, if I were him, be very careful in handling these species in particular.

– Wynston receives a DD Hammocks Camping Hammock worth $119.95. Readers, send your letter to editor@lifestylepublishing.co.nz for a chance to win.

Hill sticks are for life

I read with interest Hazel Phillips’ article on the use of walking poles (‘Do your knees a favour’, November 2016).

For many years, New Zealanders have been wandering the hills with a hill stick, or a mustering stick. But in recent times, the use of hill sticks seems to have been forgotten.

I am a keen user of them and have made great use of them all my tramping life. A hill stick is made from manuka, usually cut at shoulder height – longer if you are snow raking for sheep or cattle. You use it as if you had a third leg, giving support for your knees on the down hills, sidling and climbing.

With practise, you actually learn to ‘dance’ around your hill stick and when you get to know it, it becomes your friend and you never feel alone in the hills. You can use it to test the depth of a bog hole or push tussock aside while sidling. If you have short legs, you can use it to push the wire down when climbing over a fence. They are a tremendous support for river crossings. On a shingle slide, they dig in and keep you standing up straight. They are also renewable, with nature being a good provider.

There are a few disadvantages with them in bluffy terrain, as they can get in the road, but you usually find a solution.

I urge all trampers to try a traditional hill stick, you won’t be disappointed.

Some years ago, someone, either through Wilderness or the New Zealand Alpine Club asked for help on material on George and Caswell sounds in Fiordland. I had a copy of The NZ-American Fiordland Expedition, published in 1949, by A Poole et al. The publication included good maps of the area and important data.

I offered to lend it, posted it off and never heard back. Unfortunately (blame old age) I have lost the address of the person I sent it to.

There would be few who are interested in that part of Fiordland and perhaps some kind person might be able to help me get the copy back.

– If anyone can help Robert, please email editor@lifestylepublishing.co.nz and I will connect you. – AH

Congratulations on printing the excerpt from Dave Hansford’s book Protecting Paradise (‘Death from above’, December 2016).

Part of the opposition to 1080 comes from hunters concerned at losing the opportunity to hunt mammals. This opportunity attracted many of our ancestors to New Zealand from Europe, where hunting was the preserve of the wealthy. We now realise the need to preserve the taonga of our native fauna, rather than introducing mammals to turn Aotearoa into another England.

Maybe we should go further than preserving our existing native species, and replace 19th century acclimatisation with a 21st century de-extinction programme using retrieved DNA. If you could head out into the hills to hunt Moa (with perhaps the bonus of bagging a Haast Eagle), who’d bother with goats and deer?

As a fan of outdoor New Zealand, I eagerly await Wilderness dropping into my mailbox each month here in Scotland. We are departing soon on our fifth tramping holiday to New Zealand, having progressed from Great Walks to the Moirs Guide.

In planning trips and through reading Wilderness, I am constantly aware of the issue of access. Our first experience was being turned back from a walk in Ruahine Forest Park, where the DOC office confirmed there was a paper road over private land. There was no stock, but we were not going to be allowed through.

Here in Scotland, we have had effective access to all mountain areas for a century and this is now enshrined in ‘right to roam’ laws. In England, the mass trespasses of the 1930s brought free mountain access. Hill access and sheep farming co-exist here with much greater numbers of people, and restrictions in the name of sport have not been tolerated for generations.

The attitudes of many Kiwi landowners is similar to those found in Victorian Scotland, which your ancestors left to create a more open society.

How does an egalitarian society such as New Zealand tolerate the restrictions imposed by wealthy landowners in the name of farming or sport? 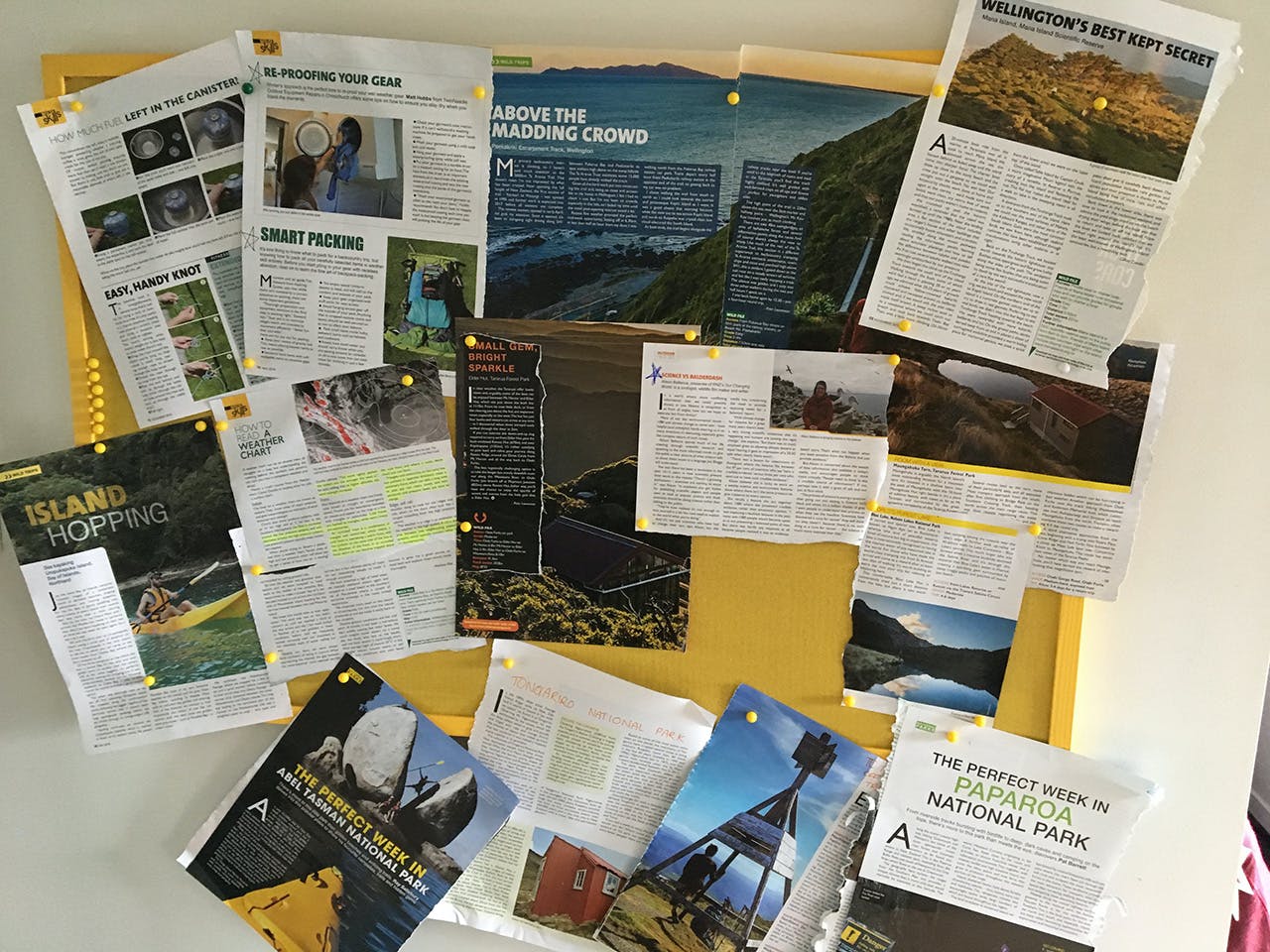 We don’t have any storage in our tiny studio apartment so unfortunately some of our Wilderness magazines have to be recycled. But there are some articles that we just can’t let go of so we’ve started a notice board to help us to remember to plan upcoming trips!