From riverside tracks bursting with birdlife to deep, dark caves and camping on the tops, there’s more to this park than meets the eye.

Along the scenic coastal highway linking Greymouth and Westport lies some of the most spectacular ocean, river, forest and mountain scenery to be found anywhere in New Zealand. This is the Paparoa Range and national park, extending from the Buller River, just south of Westport to the Grey River, which flows to the sea at Greymouth.

The geography here isolates the ranges from the Southern Alps and provides a unique climate that is more mild than would normally be expected at this latitude. The warm Westland Current, originating in the Coral Sea, flows close to the coast and provides an almost frost-free winter and a subtropical environment. This, together with intense rainfall and high sunshine hours, nurtures the nikau palms and tree ferns that grow in profusion throughout the seaward portion of the range.

The land undulates in sheltered inland valleys bound by coastal limestone cliffs and canyons where the rivers have cut through the soft rock and sculpted the most remarkable forms in the stone. These landforms provide the main attraction for trampers, who may spend days surveying, walking, photographing and navigating these absorbing features.

Midway along the coastal highway lies the gateway to the national park: the famous Pancake Rocks at the tiny settlement of Punakaiki. This is the focal point for the area, yet north and south, and especially inland, are many other fascinating opportunities for exploration and historical encounters.

Camp on the tops and view sunset over the Tasman Sea

Reaching the tops in Paparoa National Park is not easy, as most routes are rough, untracked and require navigation skills. However, there are two marked tracks to the tops, both of which are not actually in the park, but still in the Paparoa Range: the Croesus Track in the south and the Buckland Peaks Track in the north. Both require a solid day’s walk.

From the ridge crests, a traverse could be made to a suitable campsite from which to imbibe the view, which is beyond breathtaking. Not only is the Tasman Sea so close at hand, but depending on your site, much of the Southern Alps can be viewed curving away to north and south. It’s unforgettable, especially at sunset.

Water can be scarce on the tops, so take plenty with you. 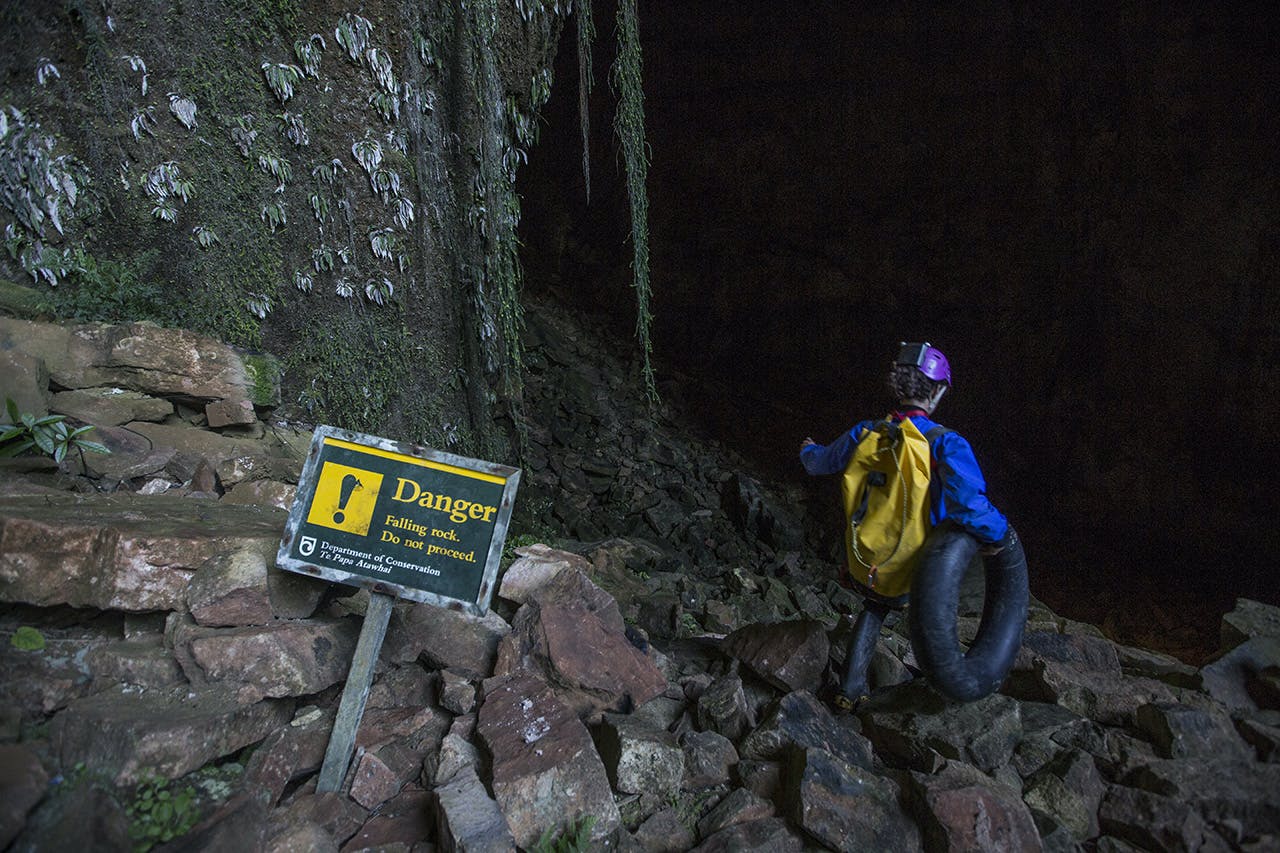 If underground exploring is your thing then Paparoa has this in abundance. There are easy roadside caves to explore near Punakaiki and other beginner caves to see, and perhaps explore, in the Fox River Valley. There are submergence and resurgence caves in the Bullock Creek area, and commercial caves in the Nile River Canyon. So take your pick.

Other than the roadside cavern, special care and adequate equipment must be taken as most of the caves here are dangerous and usually quite difficult, so advice from the visitor centre should be sought before venturing inside an unknown cave.

A multi-day tramp taking the walker from the wild and boisterous coast, through a coastal canyon and into the tranquil interior of the park where deep, winding rivers, tall forest and a remarkable limestone landscape predominates. The track, which links the mid-reaches of the Fox, Bullock, and Pororari rivers, was once the only route for explorers and later the inhabitants of the coastal towns which sprang up after the gold-rush of 1865-68.

Large settlements numbering 6000 to 15,000 once existed at Charleston and Brighton (Fox River). These towns boasted casinos, hotels by the dozen, rough and ready ports and the lure of instant riches. But in three short years it was all over and the sea and forest began to reclaim the land.

These days the inland route is solely the domain of trampers seeking the enduring beauty of the landscape. 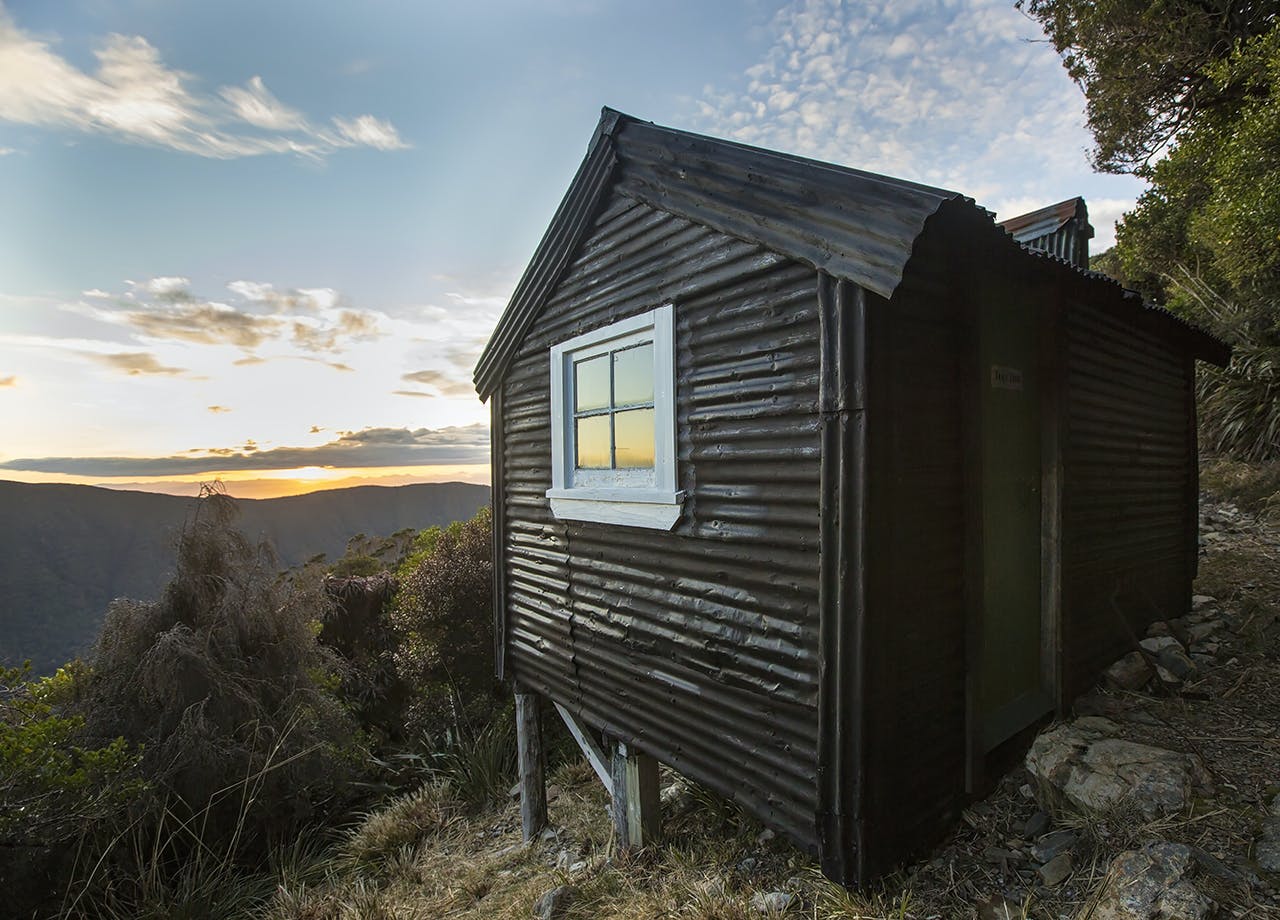 The best place for a little gold fossicking combined with an interesting tramp into a well-sited hut is around Blackball (an historic town worth exploring in its own right).

In Blackball Creek and on the Croesus Track, there are historic stamping batteries secreted in the bush, with maintained tracks accessing them, old sawmill sites, mine sites, and discarded equipment rusting in the bush.

It’s a fascinating place to explore, made easy with a campsite at Garden Gully and the Ces Clark Memorial Hut at the bush edge.

You could also explore the nearby catchment of Moonlight Creek, over the hill from Garden Gully, where there are more relics and an old hut.

The best place for a little gold fossicking combined with an interesting tramp into a well-sited hut is around Blackball (an historic town worth exploring in its own right).

In Blackball Creek and on the Croesus Track, there are historic stamping batteries secreted in the bush, with maintained tracks accessing them, old sawmill sites, mine sites, and discarded equipment rusting in the bush.

It’s a fascinating place to explore, made easy with a campsite at Garden Gully and the Ces Clark Memorial Hut at the bush edge.

You could also explore the nearby catchment of Moonlight Creek, over the hill from Garden Gully, where there are more relics and an old hut.

The Pororari Coastal Canyon is probably one of the most popular walks in the region. It is easy, short and stunning.

Beginning from the highway, an easy track wanders upriver for about 90 minutes, leading through the canyon and into the hidden, forested basin behind the cliffs. The canyon narrows and towers higher and higher as you walk through it, passing beneath overhangs, prows, and cliff-face caves. Below, the emerald-green waters of the Pororari River sweep over a jumble of massive limestone blocks.

Bird life is prolific, especially in spring when tui, bellbirds and kereru are much in evidence, feasting on the nectar of the brilliant yellow kowhai flowers.

It is a beautiful walk, one that could take an hour or two – or all day. The lower section is often kayaked at high tide and kayaks can be hired nearby.

Take a rail journey through a spectacular karst landscape

For something different during your week’s stay in Paparoa National Park, journey north along the coastal highway to Charleston and the Nile River Gorge.

Here, you can take a short rail trip along the canyon beneath towering limestone bluffs, followed by an underground exploration of Ananui Caves complete with a blackwater rafting trip. The Nile River is notable as one of the region’s most beautiful rivers. Its amber-coloured waters flow between deep pools and short rapids.

This is a place of serene beauty and a must on your calendar of activities. 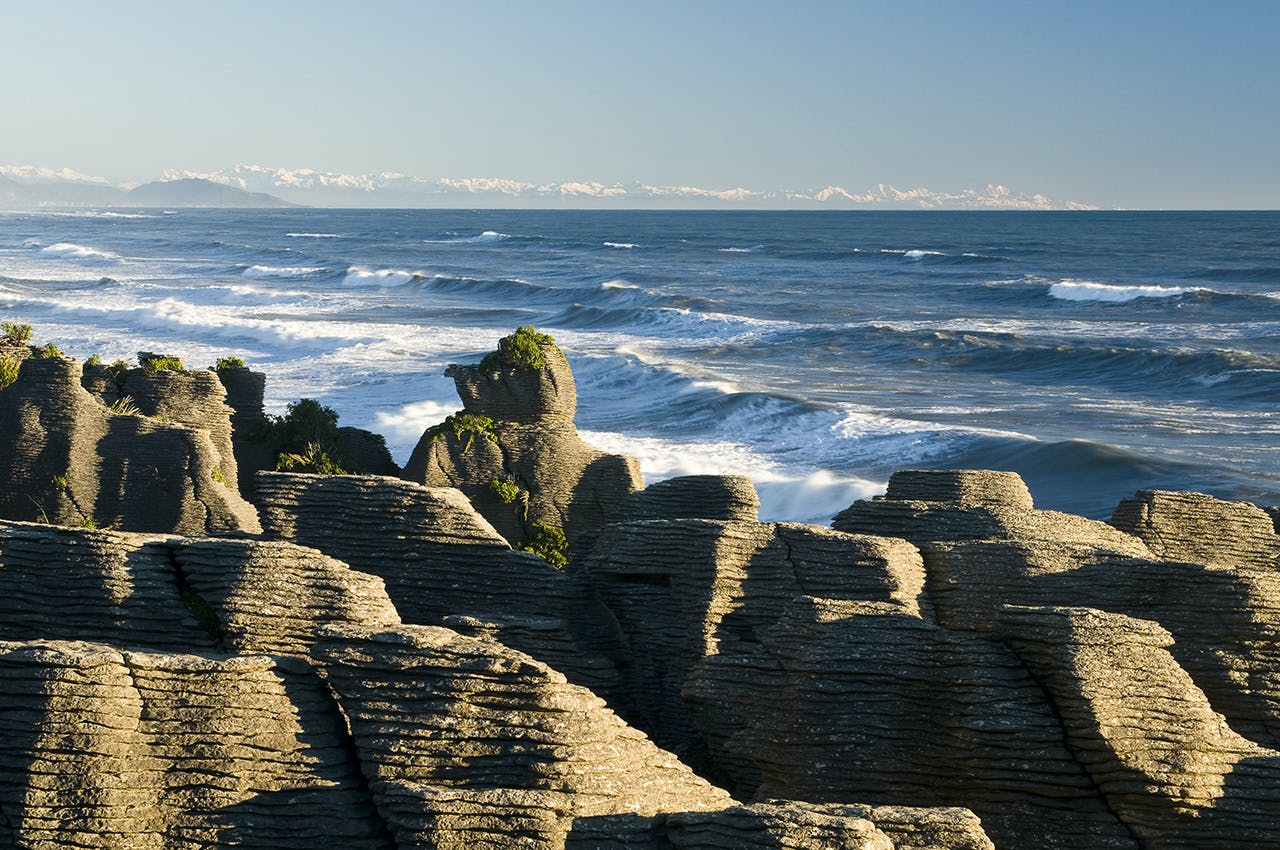 The Pancake Rocks are a major drawcard at Punakaiki. Photo: Tourism West Coast

Undoubtedly the Punakaiki Blowholes, with their attendant access walkway, are the major reason most visitors come to this park.

It’s an easy stroll through the forest and flax to the clifftop-hugging track which winds in and out above the stacks, pools, labyrinths and causeways to provide some stunning, and at times, intimate, views of the blowholes and pancake stacks of limestone rock (the reason this attraction is often referred to as the ‘Pancake Rocks’). If there is a westerly storm on the boil then you are in for a treat of booming blowholes, clouds of spray and shuddering ground.

This is a place of immense energy and spectacular sights – don’t miss it.

Climb onto the Main Range

Mt Bovis, reached by a track out of upper Bullock Creek, is a spectacular and relatively easily accessed summit which lies just west of the Main Range. From the summit, there are incredible views of the park, coast and inland ranges.

It’s a full-day trip and water needs to be carried. You could also come equipped to spend the night near the summit as there are a few campsites nearby.

Scramble the coast between the tides

Pioneer explorers Brunner, Heaphy and Fox journeyed in the 1840s down the Buller River to the coast, then south as far as the Arahura River, negotiating wild seas, precipitous bluffs (at Perpendicular and Dolomite Points), dense forest, sandflies, rain, wind and swollen rivers.

Though you may not quite want to replicate the hardships of their journey, it’s still possible to follow the line of their historic coastal route. The best route is to take the Truman Track route to the sea, north of Punakaiki (an excellent short walk), and then from the large cavern north of the track on the beach, walk around headlands, through more caverns, and fascinating limestone sculptures almost as far as Perpendicular Point.

This should only be attempted at low tide, as much of the route will be inaccessible at mid- to high-tide.