It was a hot sunny day when The Spirit of Enderby steamed out of Bluff Harbour into the calm waters of Foveaux Strait, bound for New Zealand’s subantarctic islands and two weeks of sea kayaking and wildlife watching.

By late afternoon, Stewart Island had disappeared in the haze and our next stop, the Snares group of islands, lay 200km to the south. The ocean became rougher as we made our way into the roaring forties, the ship sailing through the night so the 50 passengers could spend the following day exploring the islands.

We woke anchored at Station Cove, a small bay on the eastern side of North East Island, the largest of the Snares group. Winds were gusting up to 40-knots and were too dangerous for kayaking so we headed for shore on the ship’s inflatables. Vertical cliffs, carved by decades of waves smashing against them, made for a rugged but spectacular shoreline. Countless seabirds had made their nests among the numerous outcrops while in the sea and on land were Snares crested penguins, so numerous they covered the shoreline with only an occasional break where a group of sea lions had made claim to a more sheltered spot.

All too soon we were back on the ship making our way through the furious fifties to the Auckland Islands.

By the following morning we were anchored at Port Ross just off Enderby Island, the northernmost of the Auckland Islands. Our group in single and double kayaks was soon exploring the sheer basaltic columns and small caves on the southern side of Enderby. Sticking close to the shore, we made our way through large chain-like columns of kelp which ran for tens of metres below the water’s surface. The shoreline was swamped with bull kelp while several sooty shearwaters hovered nearby. It felt great to be kayaking in one of the world’s most protected environments.

We entered Sandy Bay,  home to the largest Hooker’s sea lion breeding area on the Auckland Islands. They swam beneath our kayaks while a couple of large males barked their disapproval from shore.

We landed at the beach and explored a small cluster of battered huts which are now used as a research station. Enderby Island had been settled and farmed, but now all cattle and rabbits have been removed. A wooden walkway has been built so visitors can walk from one side of the island to the other. As we started out, we had to ‘give way’ to a yellow eyed penguin that was making its way from the beach to its nesting area.

We walked through the island’s botanical gardens, filled with a remarkable display of flowering megaherbs. Pink anisotome, purple myositis, white tree daisies and the huge yellow bulbinella were but a few of the flowers growing on the island plateau. The stars of the show were the magnificent southern royal albatross, sitting alone on their nests, some only a few metres from the boardwalk, seemingly unconcerned at our presence.

At the northern edge of the island, we were able to gaze along the towering cliffs where several sooty albatross had made their nests. Wild seas were throwing huge waves over Derry Castle Reef, named after the ship which sank here in 1887 at the cost of 15 lives.

Overnight, we sailed to Carnley Harbour, also on Enderby, where we had another full day of exploration, including visiting the site of the old southern coastwatchers’ station on Musgrave Point set up during the Second World War. We also observed old homestead sites, a shipwreck and where the German ship Erlangen took refuge during the war.

That afternoon we started on the long voyage to Macquarie Island, an Australian territory. We sailed all through the next day and sometime during the night reached the island. We were joined on board by Australian customs and biosecurity personnel before being allowed to land. A 20-knot wind made it difficult to get into our kayaks, but once in Sandy Bay, the hills offered protection and it wasn’t long before we were situated not far off the beach.

Sandy Bay has one of the largest king penguin and royal penguin colonies in the world and there must have been more than 5000 in the bay. They were curious, with dozens swimming around our kayaks, stopping every now and then to peck at them and stare at these strange visitors. We paddled south to a rookery where several rock-hopper penguins were nesting, but with the wind gusting 30-knots, we soon retreated to the ship.

The next day we explores some rock gardens near the northern end of the island before landing at Garden Cove, a small bay just north of Anare Station. There are around 15 people living permanently at the Australian base, conducting scientific work, maintenance or attending to the wildlife programmes. 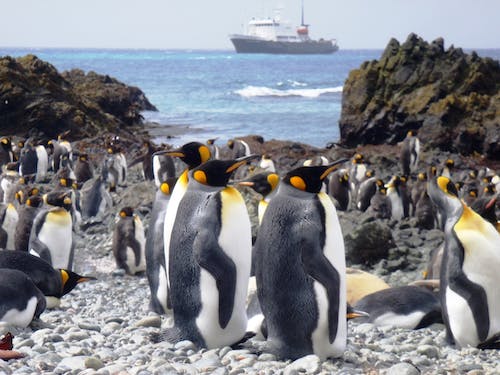 The Spirit of Enderby at anchor off Sandy Bay, Macquarie Island.

Another full day at sea followed  as we steamed towards Campbell Islands, our last stop before heading back to Bluff. Light rain fell over Campbell Island as we launched our kayaks onto a calm sea inside Perseverance Harbour. Campbell Island is the main breeding ground for the yellow eyed penguin and as we kayaked along the shoreline, several small family groups appeared in the vegetation along the shore. Each group seemed to have its own territory with the occasional sea lion standing guard over over its own area. Rounding Erebus Point, a colony of 50 sea lions was situated on a barren outcrop, occasionally barking at us to keep our distance.

Into the open sea, we followed the coast until rounding East Cape – the eastern-most point of Campbell Island. We were surrounded by steep cliffs that rose 200m straight out of the ocean. By now we were paddling into a two metre swell and,  with nowhere to land, there was an eerie feeling about this place so we headed back to the calmer waters of Perseverance Harbour.

That afternoon we were able to finish the day with a walk to the royal albatross breeding area where several of the albatross were nesting beside the track. It had been a day full of amazing wildlife encounters and scenery.

Our last day kayaking was under a blue sky and with very little wind. Tucker Cove was the site of the largest homestead on Campbell Island where 7000 sheep and other livestock were farmed in 1913. The venture ultimately failed and by 1985 the Island had been cleared of all livestock.

At Camp Cove we visited the loneliest tree in the world, a sitka spruce, Campbell Island’s only tree, separated by 400km of ocean from its nearest kin.

On our way back to the ship, we cruised around the end of Perseverance Harbour and encountered more yellow eyed penguins, sea lions and a couple of elephant seals.

The following day we were back on the open sea, heading for Bluff and all too soon we were frantically packing in readiness to disembark and make our way home.

How: Heritage Expeditions offer trips to the Sub Antarctic Islands and Antarctica each year, two of which include kayaking