These five online maps will change the way trips are planned and give a new perspective on your favourite tramps.

1. Tramp the world from your couch

Fly along the Southern Alps or race along the Milford Track – with Google Earth Pro you can virtually tramp anywhere in the world.

Upload your own tracks onto the map and follow them as a virtual flyover, giving an overview of a tramping trip.

I have found it to be a useful tool when planning my tramps. Campsites can be scoped and you can get an understanding of the terrain that is impossible when staring at a topo map (though sometimes the programme does get the terrain wrong, so you should still pack a topo map). 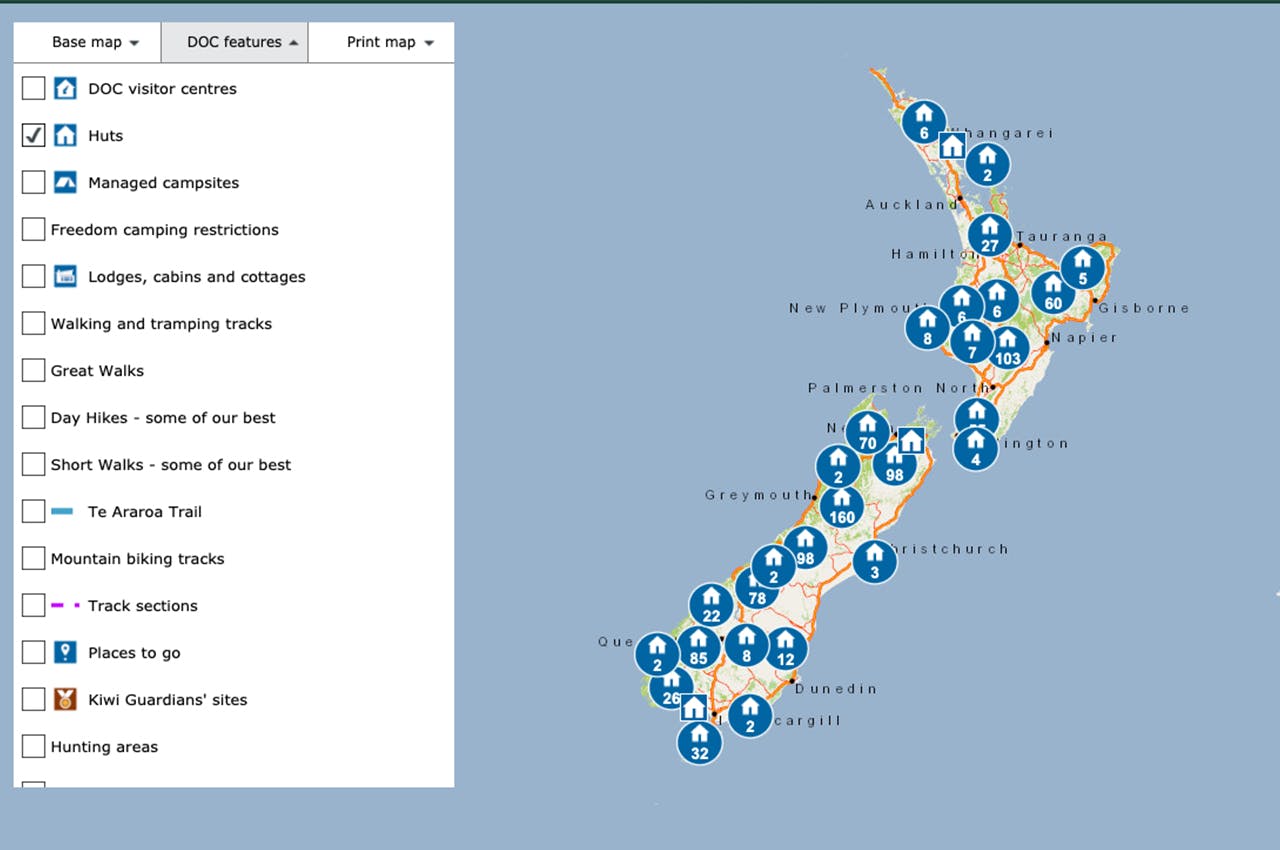 Find all the huts with DOC maps.[/caption]

DOC Maps is the best tool for finding huts, campsites, tracks and patches of conservation land.

Click on any feature to get a hut name, track or piece of conservation land and a link to more information on the DOC website.

It allows identification of features you want on the map (e.g. huts or campsites) and it can show multiple layers at once. Click the ‘public conservation land’ layer and watch half of the South Island turn green and gold as it highlights the conservation estate. Click the ‘huts’ layer and watch the country fill with hut icons. Click ‘tracks’ and watch squiggly purple lines spread like veins from Cape Reinga to Rakiura.

3. A cultural atlas of the South Island

South Island iwi Ngāi Tahu has created Kā Huru Manu, an interactive map with information on more than 1000 features including traditional Māori placenames for just about every lake, river and peak, and these features’ history and mythology. There are also records of hundreds of culturally important sites such as hunting grounds and traditional Māori trails.

It gives a different perspective on the landscape and tramping tracks.

Using the map, I discovered that a track I walked in the Blue Valley, near Haast was once part of a major greenstone route that was more popular than Haast Pass for accessing the West Coast. A road not far from my house was once used by Māori to travel between Moeraki and Makarora where eel were fished for during summer. 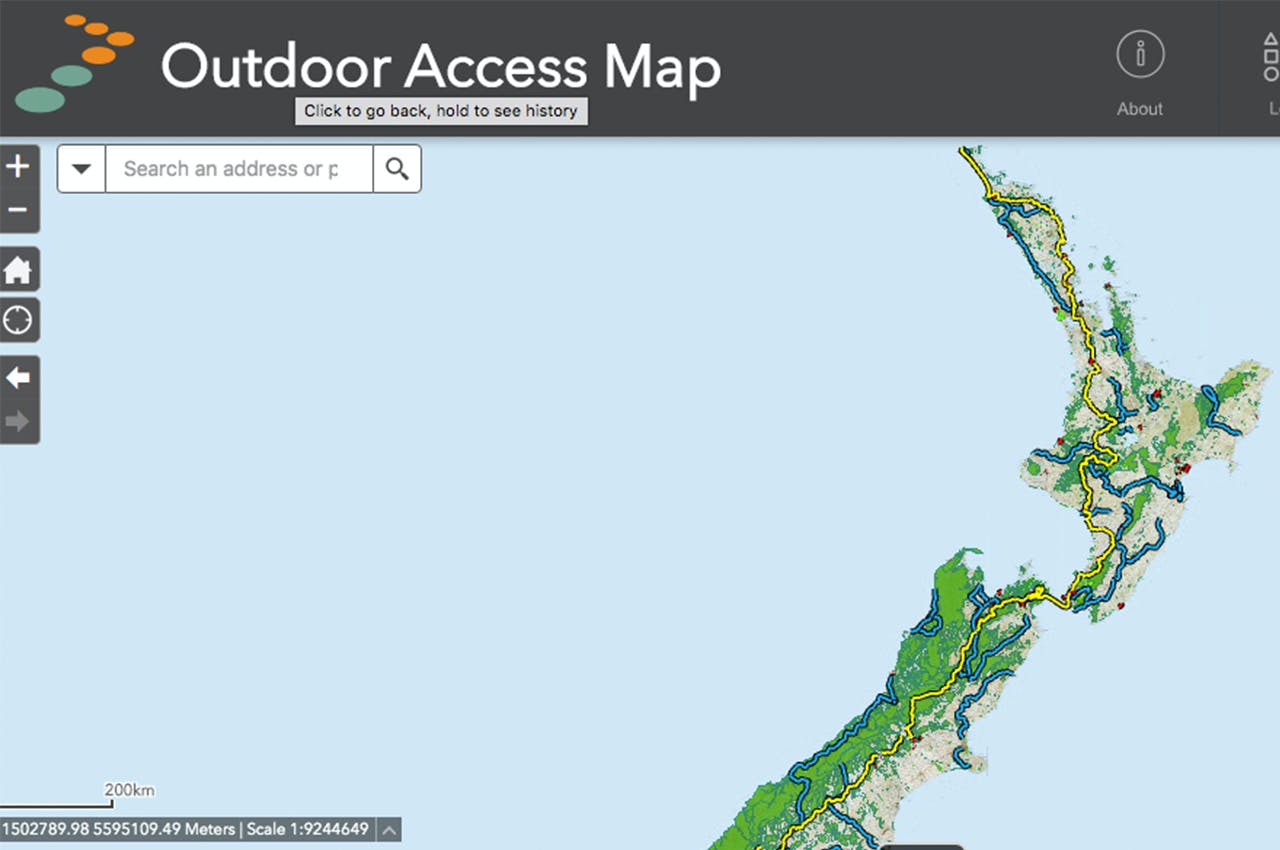 The Walking Access Map pulls info from DOC and local councils into one place.[/caption]

The Walking Access Commission has created a map that attempts to include all public tracks and hiking facilities, including paper roads, council-owned tracks and reserves, and public tracks on private land.

As well as public land, there’s a feature to show property titles and the boundaries of different parcels of private land. This could be useful when needing to contact a landowner to access a track.

The map has additional tools, like the ability to draw routes which can be exported to a GPS device or other mapping software. It can also instantly provide an elevation profile of tracks on the map.

I’ve found the WAMS map difficult to use and glitchy, but for a comprehensive map of New Zealand tracks and public land, it’s unbeatable. 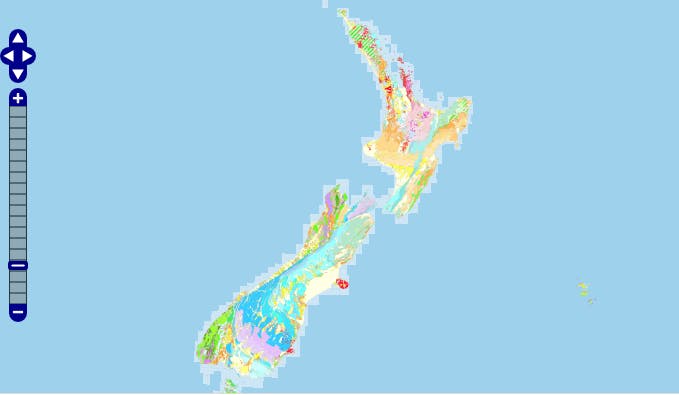 5. NZ’s origins at a glance

For geology nerds, GNS has created a fascinating colour-coded map showing the rock types which underpin the country and the fault lines that split it apart.

Click on a colour and the map shows the type of rock found in that location. At a glance, you can see the enormous rift of sandstone and mudstone running from the Tararuas through the Ruahine, Kaweka and Ikawhenua ranges; the pumice and ash of the Central Plateau; a purple splodge representing the granite in Kahurangi National Park; the slice of blue indicating the rocks of the Southern Alps.