It finally happened; the kids grew up.

As active trampers David and I had spent many days in the hills BC (before children) and had been longing to get back to doing the sort of trips we loved. We dreamt about bashing up bouldery streams to bush-edge campsites, scaling rocky ridges and wandering along tussock tops to pitch the tent by alpine tarns. We hadn’t stopped tramping since the kids were born, we just hadn’t been doing as much and we hadn’t necessarily been doing it together. Family tramping trips had to be planned around the needs of babies, toddlers or young children. Multi-day trips along alluring tussock tops had to wait.

It wasn’t that we didn’t enjoy putting the kindy bags on the kids’ backs and trying to convince them that a ‘tramp’ to the Sign of the Kiwi was well worth the ice cream at the top. And we had experienced many varied trips into different parts of New Zealand’s backcountry using front-packs when they were newborns, advancing to child carriers as they became older. But tramping parents will know there is something very special about their kids getting to the age where they can carry their own sleeping bags, are robust enough to tramp for hours in the rain without getting too cold, and are capable of climbs though the forest and beyond the bushline. 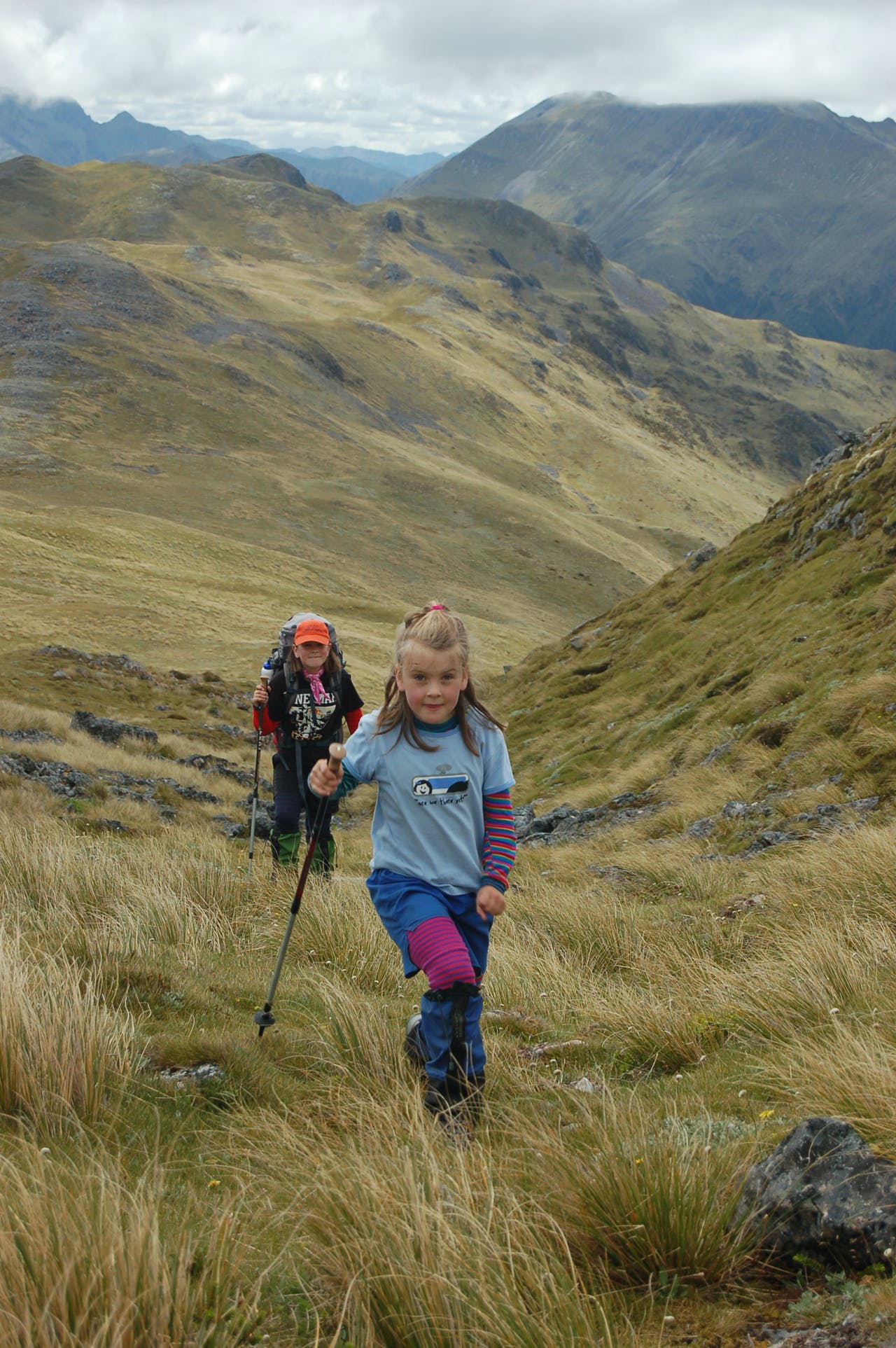 Mackenzie (in foreground) and Alice approach a low saddle on the ridge. Photo: Jo Stilwell

As the kids grew older, they started to fit comfortable tramping packs with proper fitting waist belts. We have tall children, so while their height meant they were heavy to carry as toddlers, it also meant they could fit a wider variety of tramping gear. At eight, Alice was the proud owner of an extra small women’s Macpac Reflex jacket – something I didn’t own until I was in my 20s.

From the outset, David and I made the decision that comfort was vital and as far as possible we wouldn’t ask the children to use gear that we ourselves would not be happy using. It was a hard decision, though, to buy Meindl tramping boots for growing feet. It was a wise decision and one we have never regretted. Alice, with her hyper-flexible ankle joints, needs the sturdy leathers and when Mackenzie finally fitted into leather boots a whole new world of outdoor possibilities opened up to us again. The ‘tops’ were waiting for us, exactly where we had left them nine years previously.

Our first family trip above the bushline was the classic Lewis Pass tarns trip. Starting at the pass itself, the climb to bushline is a relatively short 400m altitude gain. With a mixture of stories, lollies, and lots of short stops the silver beech forest eventually gave way to scattered tall tussocks among the carpet grass. I wouldn’t say the kids enjoyed the process of walking uphill with a pack on their back; but this was the beginning of them developing a mental and physical toughness needed to tackle long climbs. As adults we take for granted the mental strategies we employ for uphill slogs – we might say rhymes to ourselves, spot a tree in the distance as a target, count different plant species, while all the time knowing that each step taken is one closer to the top. We have learnt the physical benefits of slow and steady, and pushing on through an extra steep section even when the calves are burning. Kids have all this to learn, though, and while this particular climb was neither long nor too steep, it certainly wasn’t easy for them.

I can’t remember which particular tarn we chose to pitch the tents by that evening. We didn’t get far along the ridge but we hadn’t planned to, either. The sun wasn’t shining and there wasn’t any sitting around drinking hot tea watching the sunset because a cold wind was blowing from the south and bringing the drizzle with it. But this didn’t matter. And nor was it a problem that the meal I had dehydrated myself really did look and taste like dog food – there was plenty of chocolate, and kids don’t mind eating chocolate for dinner. And it wasn’t important that this was one of the easiest routes to the tops in the whole of the South Island, one which David and I had done a couple of times previously. What mattered is that we were here with the kids, doing it as a family, snuggled in our sleeping bags with a kid in each tent listening to the drizzle falling softly on the fly. 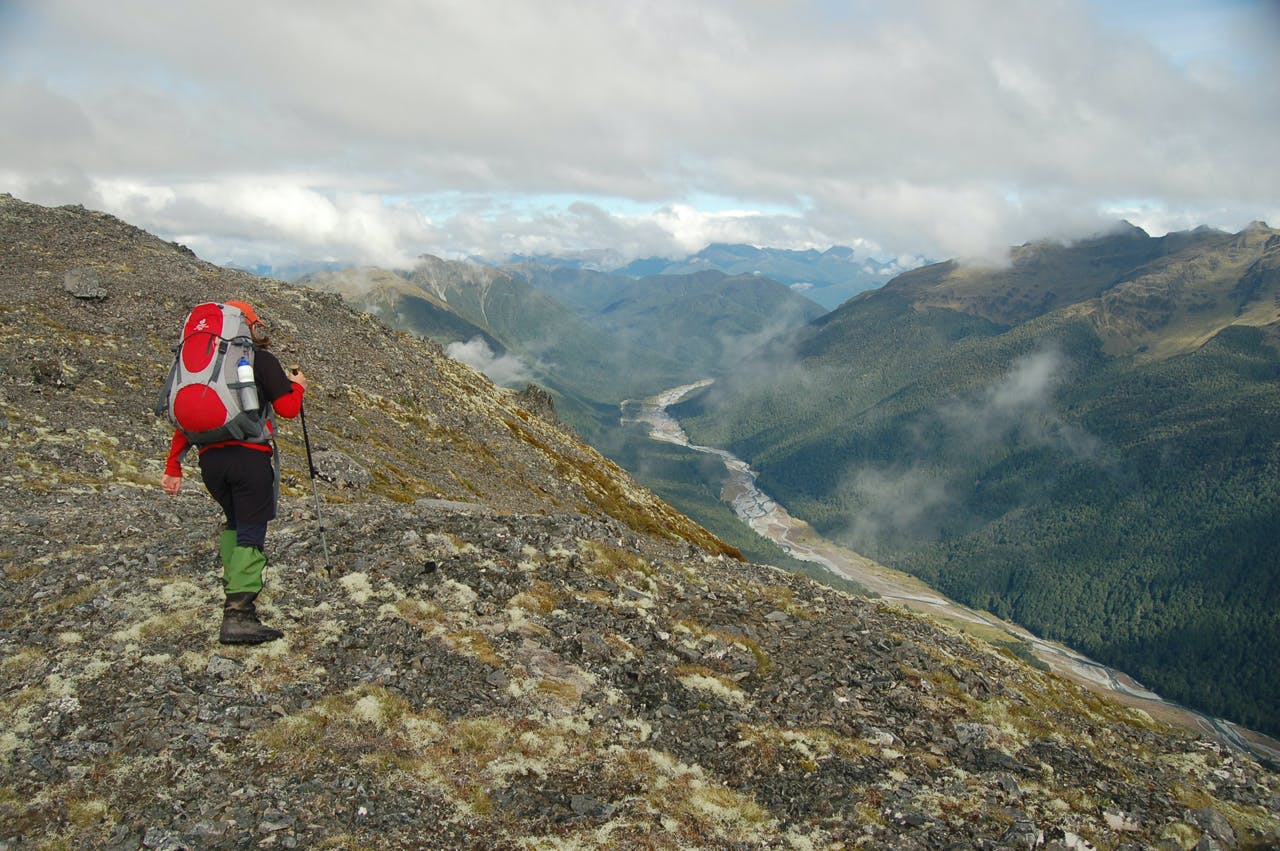 We woke the next morning to a beautiful clear day but with nor’wester threatening to darken the sky. Wanting to enjoy the sunshine we had a leisurely breakfast, with the kids learning that the normal rules and regulations associated with food went out the door while tramping. They were allowed a cereal not usually permitted at home, and once again the chocolate appeared.

We traversed the ridge to a campsite just below The Apprentice. We had thought we might have got to Brass Monkey Biv, but this was quite far enough for the kids. David and I looked longingly up to the ridge and we both battled with the desire to continue on. How far was it? The kids could easily make it. What if we carried their sleeping bags? We hadn’t walked far and our packs were light. For us it would be easy, but stopping was the right thing to do. Our desire to do more, travel further, see what was over the next ridge or walk for another half hour before lunch were all thoughts and feelings we would have to learn to keep under control while tramping with young children.

Though we had travelled only a short distance, we had been going for quite a while. Kids need frequent stops and with tarns to sit by, rocks to explore under and grasshoppers to chase, progress was pleasantly slow. Sometimes our patience was tested. At one stage, within the space of an hour, we had stopped to put tape on a blistered heel, had a toilet break, paused to take off a layer and stopped for food – twice. Outwardly we smiled as we attended to the kids’ needs and reminded ourselves that their enjoyment was the main agenda.

As well as regular stops, some aspects of tramping are just slower with children. Most of the travel had been over easy rolling tussock tops, but one part of the ridge had involved a short, steep and exposed descent. While easy for experienced adults, even with Mackenzie’s pack strapped to mine the girls were slow and cautious.

Kids act like kids wherever you go and within 10 minutes of setting up camp, dressed in balaclavas and raincoats to combat the cool westerly, they had a game set up amongst the rocks and pools of water for their small soft toys they had carried. While I prepared our night meal, David and the girls scrambled up the ridge to “climb the mountain”. 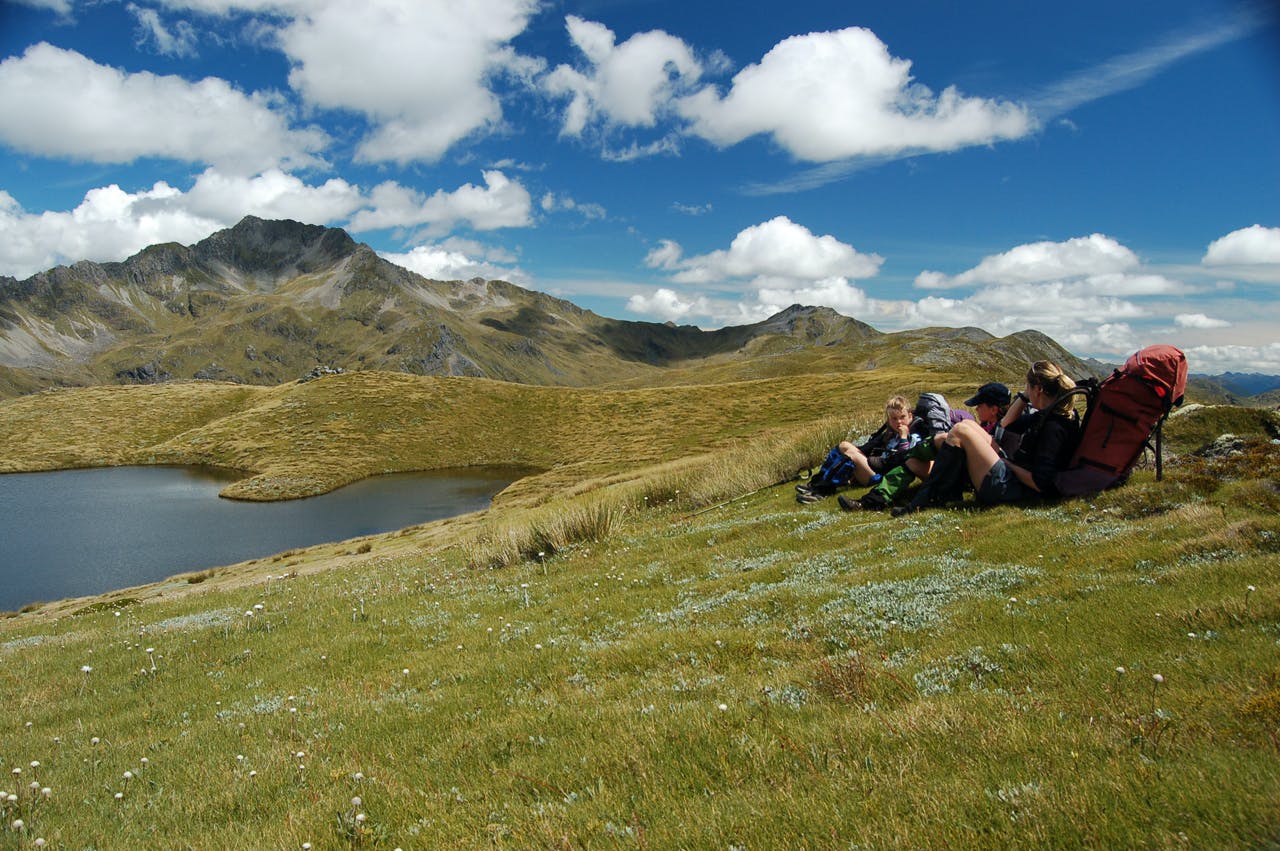 The tops here are scattered with many alpine tarns, providing great rest stops along the way. Photo: Jo Stilwell

While at 1678m The Apprentice is only a blip along the ridge, but as far as the kids were concerned it was a mountain with a name and their cries of delight as they reached the top could be heard over the hissing of my MSR stove.

The cold sent us to our sleeping bags early after dinner and this time we swapped children for the night. While the kids would have been fine in a tent together we have found over the years of camping and overnight tramps that they slept better and longer if we had one each. For now, while they were still young, this is the way we decided to do it.

An early morning walk had us wandering through the mist down to the tarns at the head of Lucretia Stream and then we finished the trip by returning the way we had come, walking out easily in a day.

With the long descent to Lewis Pass the children were able to appreciate just how much up-hill they had covered on the way in. And with Alice’s pack strapped to mine so she could nurse her dodgy ankles and knees, I was thankful that walking poles were now a regular piece of tramping attire. Like good tramping boots and a comfy pack, poles add considerably to kids’ stability during river crossings and across slippery terrain.

With the children snoozing in the back of the car, David and I spent the entire drive home planning other trips involving tops travel. And so the tradition of doing at least one family ‘tops’ trip each summer began.

When we look back now, five years later, on the very small distance that we travelled during those three days we are astounded by just how much the kids have grown both physically and mentally. Over the next few summers we 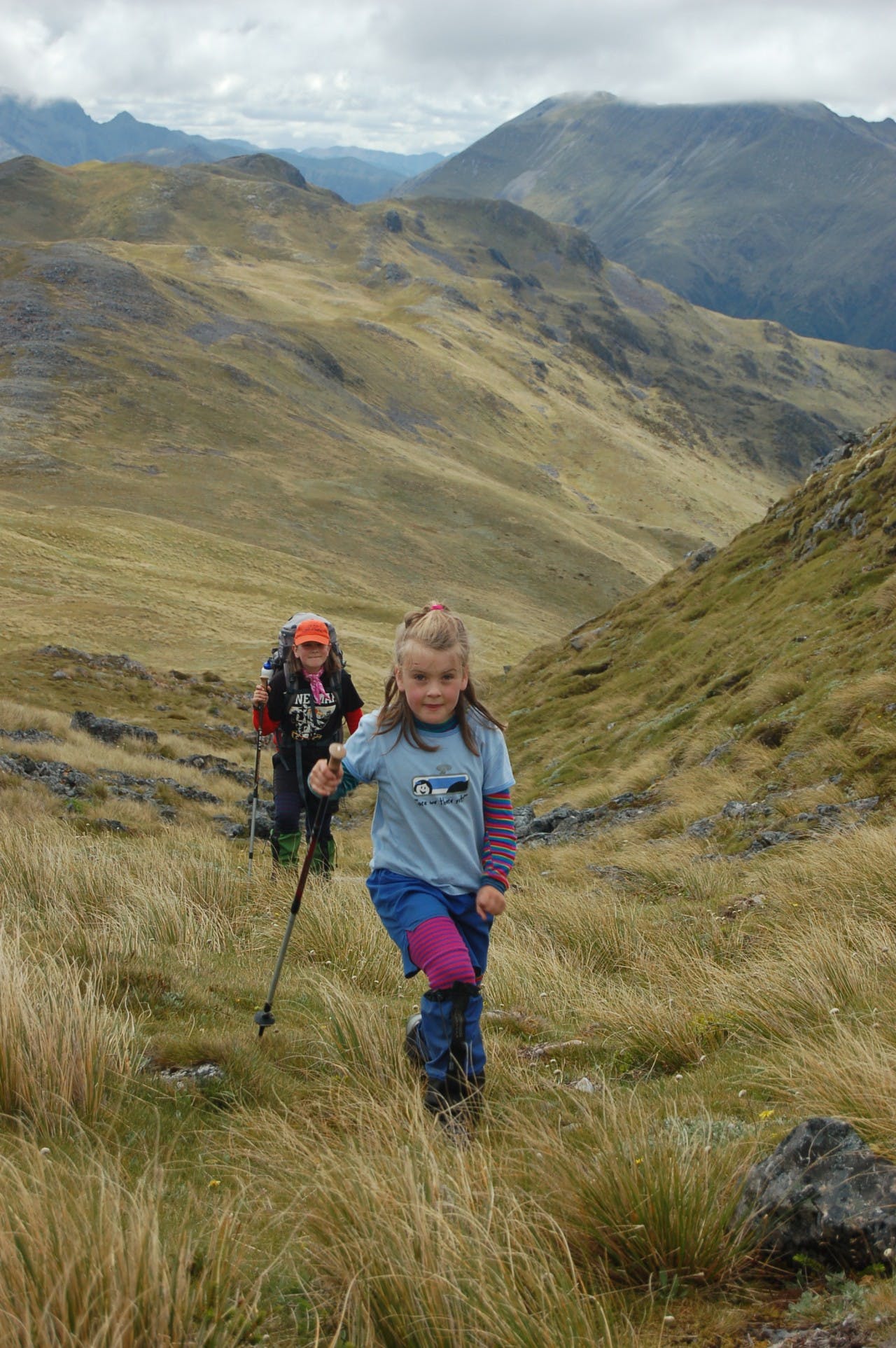 Another misty campsite, this time nestled under The Apprentice in the headwaters of Lucretia Stream. Photo: Jo Stilwell

headed off on increasingly challenging tramps where the aim of each trip was always to be above the bushline as much as terrain and weather permitted.

Babies and toddlers really do grow up. It takes time and patience but with the right type of careful nurturing and encouragement, you can grow them into competent and experienced trampers. And if you have had to put some of your outdoor journeys on hold, rest assured that the tussock tops and mountain ranges are going nowhere – they will be standing right where you left them, ready for your return with your children.