Suicide mission or feel good ride? Edith Leigh cycles the 150km Otago Central Rail Trail with her 18-month-old daughter on the back of her bike

And then we’ve run out of space for any more chat as our bikes pass each other along the Otago Central Rail Trail.

Behind me I can hear the now familiar gasp of surprise.

“Yes. Did you see that honey? A baby. On the back of that bike.”

I smile to myself, but I didn’t feel so brave yesterday. 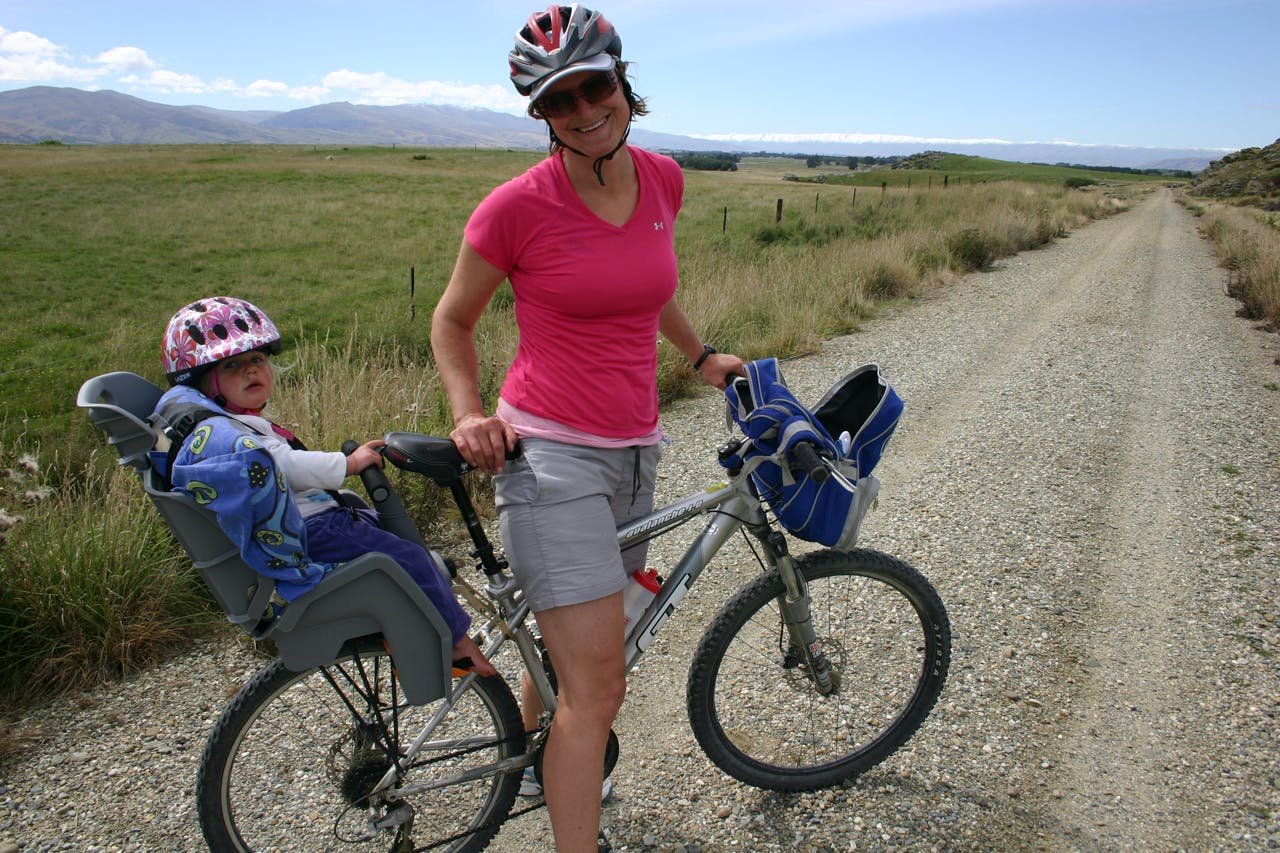 Standing with my eighteen-month-old daughter next to my bike at the start of the rail trail, 150km suddenly seemed like a long way.

As Anika squirmed while I tried to rub more sunscreen on her arms, I felt more than a little apprehensive.

I had no idea if I was about to enter three days of hell, or if this would become one of those trips I could look back on – when my daughter grew up to be a downhill, mountain biking speed demon – and say: “It all started here.”

I let out her straps to allow for the pillow I’d added to give her seat a little extra cushioning and quelled my last minute doubts.

After all, I wasn’t entering into this venture un-equipped.

This wasn’t my daughter’s first time on the bike and I had quickly learned even a few kilometres can become a long, unpleasant pedal with a whining, crying toddler on the back.

I don’t like giving lollies and sweets to my daughter but when the back of the bike starts to rock wildly and home is still half an hour away, all good intentions and high morals are abandoned with lightening speed.

Besides, I have good memories of my own mum taking me tramping when I was young. I can remember stampeding through mud and a fantail flip-flopping around my tramping boots. But I can also remember it was the promise of chocolate snacks that got me to put those boots on in the first place.

So with a deep breath, we left the car to bake in the car park for the next three days, cranked up the pedals and were off.

It took me by surprise when that sudden, giddy feeling of freedom you always get at the start of a holiday road trip engulfed me.

Anika chatted on the back of the bike – “sheep”, “horse”, “bike” – while my husband and I caught up on what seemed like months worth of chatting as the tyres hummed and spat stones.

The former railway track had connected the Central Otago goldfields to the city of Dunedin and on the long, gravelled straights Anika extended her vocabulary with new words like cutting, tunnel, viaduct and gorge. 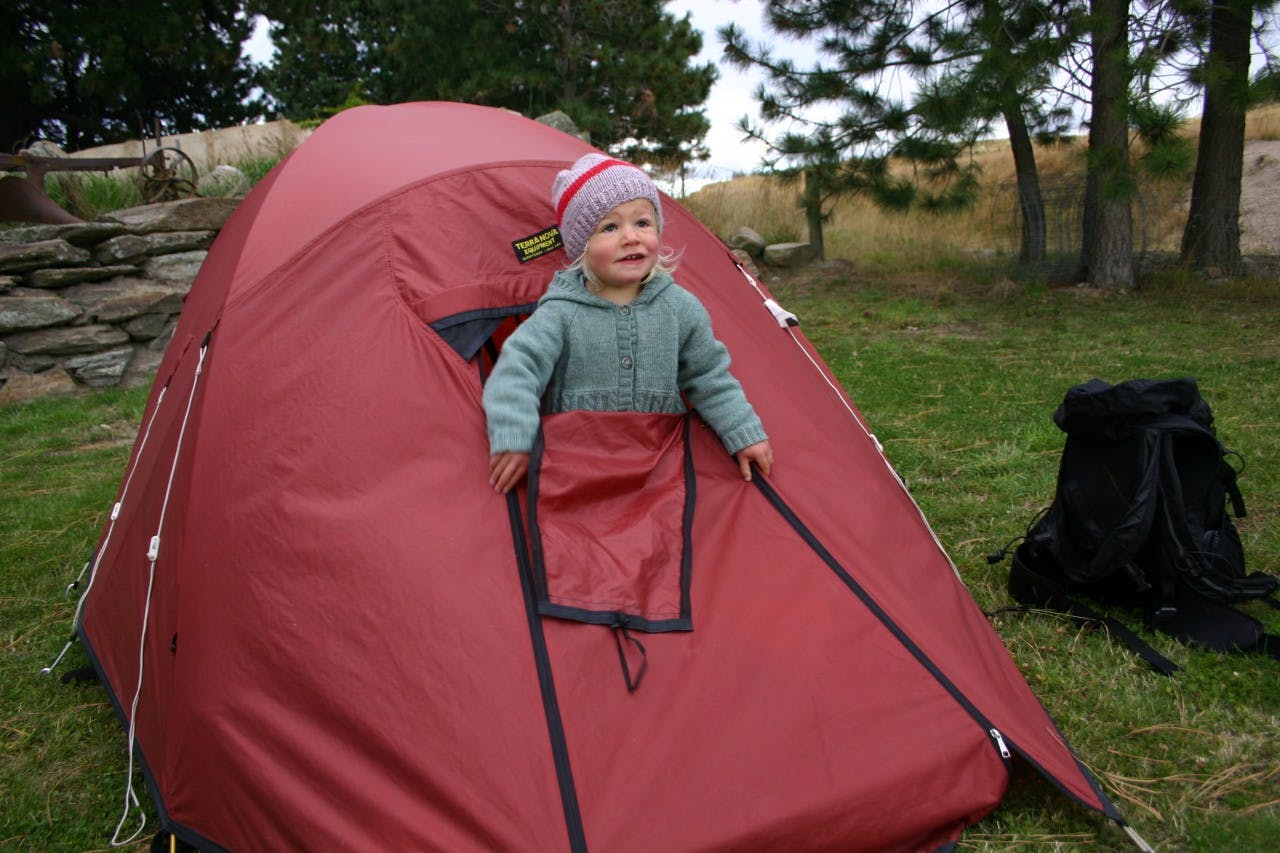 Tent accommodation gets the thumbs up from Anika. Photo: Edith Leigh

It took 16 years to build the railway, and labourers, stonemasons, blacksmiths and engineers worked through the scorching summers and harsh winters to eventually reach Clyde in 1907. However, by 1921 the goldrush was over and the railway line was mostly used to freight goods and supplies until road transport rendered it defunct.

Today, the sightseeing Taieri Gorge Railway train still runs between Dunedin and Middlemarch, but at the other end the final stretch of railway between Clyde and Cromwell lies drowned beneath manmade Lake Dunstan.

The local community and the Department of Conservation rallied to preserve the 150km stretch between Clyde and Middlemarch and convert it to a cycling and walking trail.

The railway was re-surfaced with hard-packed gravel and 68 bridges were re-decked and fitted with handrails, before the rail trail opened in 2000.

I’d had visions of sailing along through dry, golden plains of tussock, cutting the silence with a trail of wails and tears, but instead my daughter entertained herself by kicking off her shoes and constantly pulling down the back of my pants.

She also gave us plenty of excuses for breaks and coffee stops, but while the going was good and she was happily singing, or sleeping on the back, we ate as many miles as we could.

When we reached our first night’s destination, Anika was in heaven as we pitched our tent right next to the playground.

Later that evening, stomachs bulging after a huge meal at the Omakau Commercial Hotel, the three of us squeezed into our two-man tent. Or more accurately, Anika lay sprawled comfortably like a cat in the middle, while my husband and I lay pinned against the sides.

I felt a curious mix of being both adventurous and boring all in one go. I was elated at how well the day had gone, but aspects of this trip were so foreign to our usual experience of the great outdoors. 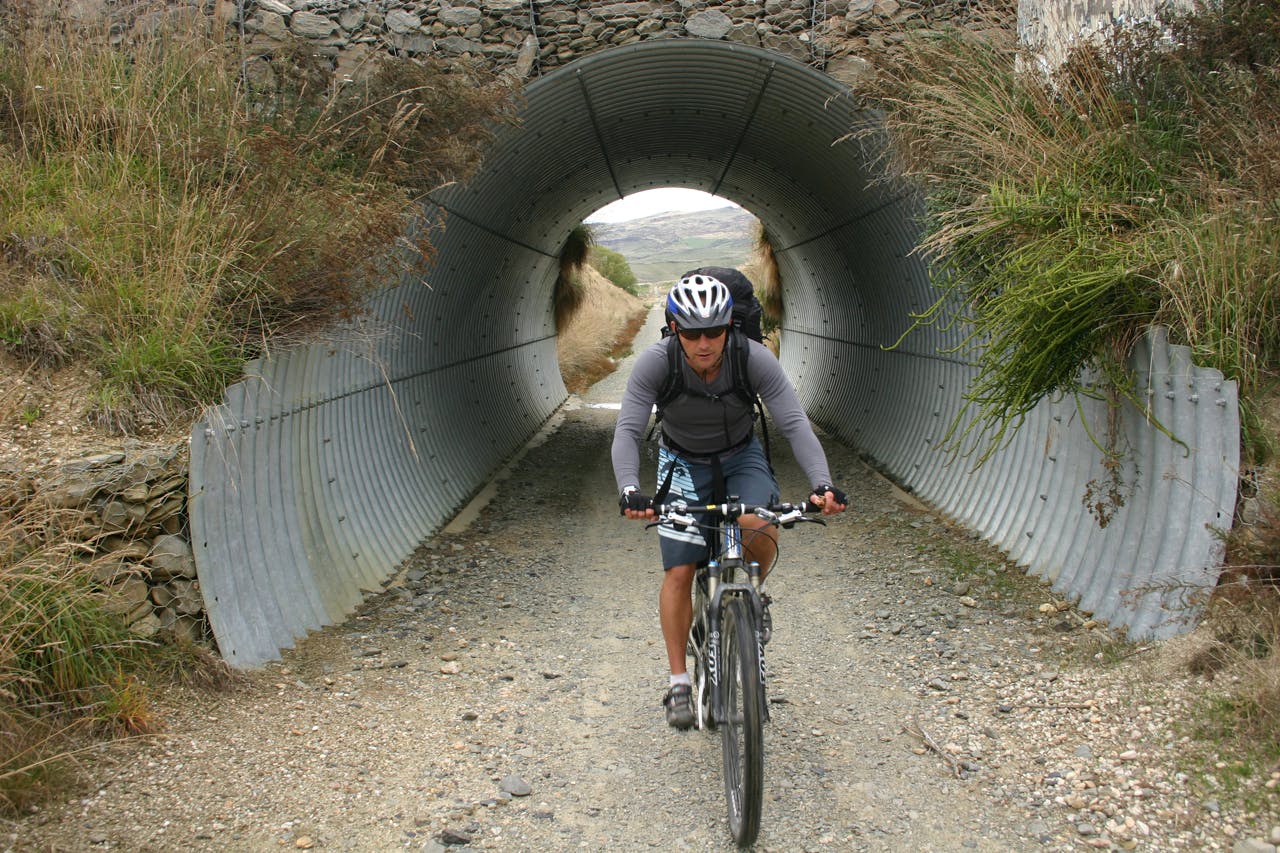 Taking a toddler outdoors for days at a time, rather than just down to the park in her stroller, felt adventurous. But eating out, instead of firing up the cooking stove, and paying someone to ferry our bags felt a bit like cheating. There was a time we would never have even contemplated paying someone to take our bags, when we could stuff everything into panniers and carry it ourselves. There was that same strange mix of relief we weren’t doing it the hard way and longing that we were, when we passed others on heavily laden bikes.

In the morning, however, all the affirmation we need that we’re doing the right thing is there. Anika is up and has her cycle helmet on before we’ve even had breakfast.

We pass the halfway point and, while the trail rises so gently it doesn’t feel as if you’re pushing uphill, suddenly we’re cruising along at twice the speed for half the effort.

When we stop at Wedderburn for the night, I chat to a masseuse who has set his massage table up outdoors next to the rail trail and is waiting for business.

The plan is to ride 75km on our last day, as we nonchalantly overlook the fact it is double the distance of previous days.

It is, after all, all downhill to Middlemarch, and we have to stop and put a windproof jacket and hat on Anika as our legs spin furiously and we fly along.

The day started off fine, but after a lengthy lunch, lying back in the long, dry grass bathed in sunshine, the sky began to change.

An intended coffee stop in tiny Hyde was bypassed as Anika dozed off on the back of the bike and big black clouds began to bulge on the horizon.

The barking of a big, boisterous Huntaway and sharp calls and whistles to a skinny Collie to “get away back” and “go right” woke Anika up and she pitched in with her own barks as we passed a flock of sheep travelling along the trail. 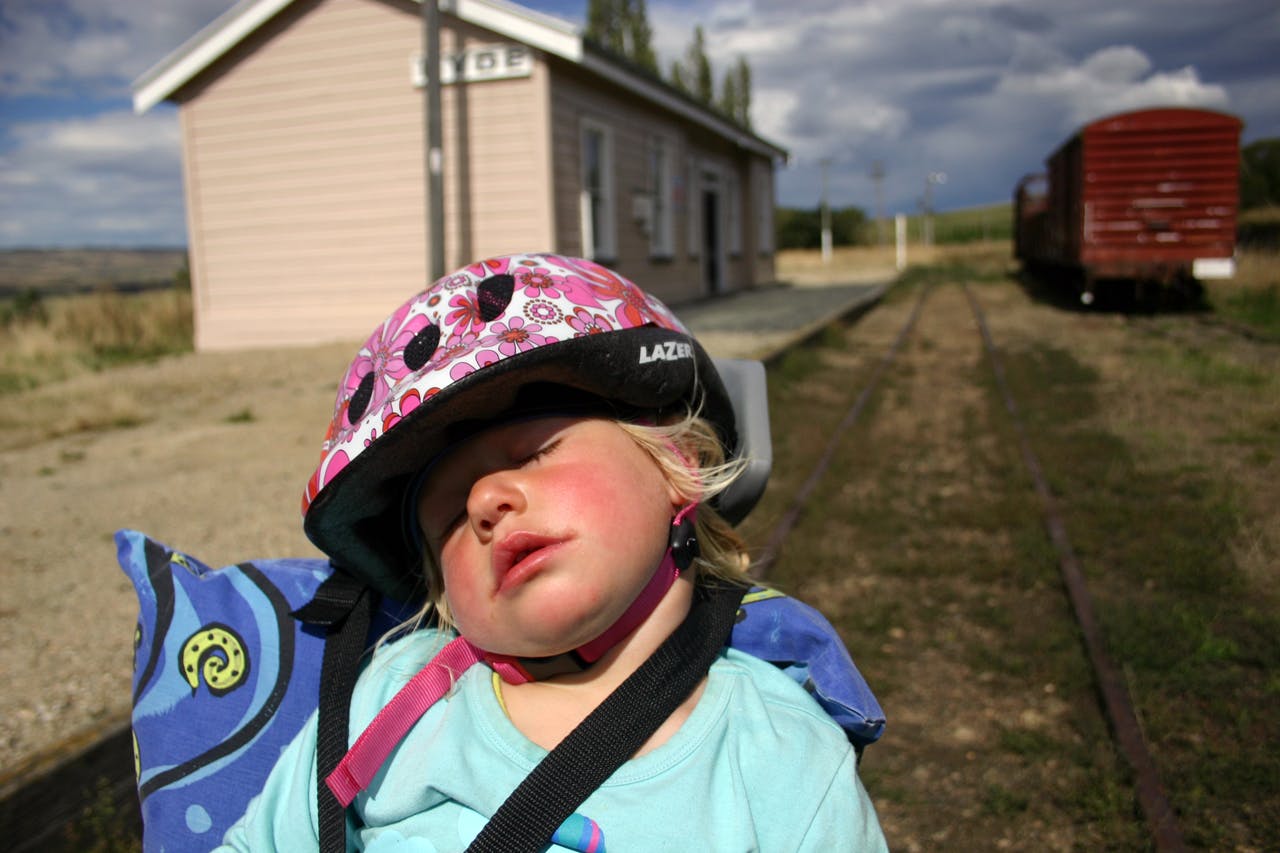 Anika fast asleep on the back of the bike drew many exclamations of surprise from other cyclists. Photo: Edith Leigh

Fat rain drops started to ooze from the sky and then Middlemarch appeared on the horizon, at the end of the longest, straightest section of trail yet.

We picked up the pace again, but no matter how hard our legs pumped the cluster of houses never seemed to draw any closer.

The jelly snakes were finally called upon and Anika took full advantage of her compliant mother as she cried for “more snake, more snake”.

The rain had just increased to the level that would warrant stopping to dig out raincoats and waterproof overalls, when we coasted through the big white gate that marked the end of the trail.

I was secretly grateful that Middlemarch’s campground was closed and we had to instead stay in the pub.

As we sipped our celebration beers, the bar began to fill up with shearers and Anika managed to charm a room full of weathered, old farmers.

After a few days rest in Wanaka, I decided to try out a new mountain bike track that followed the lake shore from town out to Glendhu Bay where we were camping that night.

I installed Anika on the back of the bike, decided I couldn’t be bothered spending 10 minutes digging my shoes out of the car, and set off.

I’m not quite sure where I had got the idea that this track was an easy ride like the rail trail.

It started off pleasantly enough, but as people passed me coming back the other way, kitted out in full biking regalia I began to wonder about the strange looks I was getting.

Suddenly the path began to steepen, then to narrow, and then it got too rocky and bouncy to ride for Anika. I began to push the bike along the bumpy sections and up and down the steep hills.

After an hour, with no end in sight, I began to curse myself for being so stupid and cocky. Having expected to be back at camp by now, I hadn’t brought any food with me to placate my toddler and to top it all off as she began to wail, my jandal broke.

When we finally limped into camp I had well and truly learned my lesson.

The days of just winging it are gone. Taking off into the outdoors with a toddler is great as long as you are prepared and have done your homework.

I just hope that one day my daughter will remember the fun of shining her own torch around and shouting “echo” as she glided through dark tunnels.

And that perhaps she will have memories of harriers soaring overhead while she picnics in long, scratchy grass.