A traverse of the Paparoa Range, by Neil Silverwood

We had reached a knife-edge ridge heading south. The visibility had dropped to just a few metres and as the ridge narrowed we suddenly found ourselves stranded at the top of a cliff. Unsure how to proceed, we paused to gather our thoughts.

We were high on the Paparoa Range – the rugged, mostly untracked mountains on the West Coast. The northern section has a dragon-like spine of exposed ridges, while the southern section is mostly open tussock tops, broken by patches of dense scrub. Travel here can go from easy strolling, to all out crawling in a matter of moments. There are few tracks and only two huts – Croesus Hut at the southern end and Buckland Peaks Hut in the north.

Our goal was to traverse the northern section from Buckland Peaks to Mt Kelvin and down Sanatorium Ridge. The route had begun with a frustrating and dull walk down gravel roads beyond a locked gate. An hour after leaving the car, an honest up-hill grind took us to Buckland Peaks Hut. The track is well maintained and, for the most part, not too steep.

The basic mountain hut provides shelter, but is poorly insulated and has no heating. When we arrived, it was bursting at the seams with a large group, so we pitched our tent in a saddle above the hut with expansive views. We watched enthralled as the setting sun turned the horizon every imaginable shade of orange and red.

In stark contrast, we woke to a grey world; clouds rolled in from the west and visibility came and went with the wind. The tops of Buckland Peaks are pocked with tarns – idyllic, you’d think, but they’re broad and difficult to navigate in poor visibility. In each brief clearing, we fixed our position on the map before faithfully following the compass into the gloom.

Though it’s like looking for a needle in a haystack, we kept a close eye out for the rare mole weta – a giant alpine weta found only in the Paparoa Range. In 1994, West Coast tramper Owen Dennis discovered them and subsequent studies showed they were unique. They are the only weta known to burrow into soil.

Beyond Buckland Peaks we reached the knife-edge ridge. We scouted possible routes and found a narrow, hang-by-your-fingertips ledge offered the only escape. We managed to scramble along it until we could descend to the side of the ridge.

For the rest of the day we sidled on the inland face, avoiding the dizzyingly exposed ridgeline. On dark, halfway to Mt Kelvin, we stopped at a boggy campsite surrounded by small tarns. Conditions may have been less than ideal, but it still felt good to be in the wilderness.

The Paparoa Wilderness Area, on the eastern flank of the Paparoa Range, is one of 11 legally designated Wilderness Areas in New Zealand. By definition, these areas must take two days to cross on foot, have an adequate natural buffer from human influence, and be free of development such as ski fields, roads, huts and tracks. They are places set aside for natural processes to take place away from human interruption. People are welcome, but they must venture on nature’s terms, travelling under their own steam and carrying everything they need on their backs.

It was my travelling companion Lauren’s first tramp in a Wilderness Area and, lying in the tent on the second night, I asked her impression. She looked outside at her  mud-covered boots and pile of wet gear dumped on the mossy ground. “It’s a pretty amazing place, but I   still like huts and tracks,” she said.

The next day, I peeked out of the vestibule hoping for clearer weather, but the mountains were still shrouded in a cloak of low cloud. The forecast for the trip had been excellent when we set off – a large blocking high was said to be covering the country. The mountains didn’t get that memo. It started drizzling as we packed and it was raining by the time we set off. With bad visibility, route finding along the barren, jagged tops was painfully slow. We finally reached the base of Mt Kelvin and pitched our tent on a soggy, postage stamp-sized piece of ground and hunkered down for the rest of the day.

In the morning, the weather had cleared and we climbed above the mist onto Mt Kelvin (1434m). This section of the Paparoas is a stunning place. Rocky spires soar into the sky and in clear weather, from the summit ridge we could see the vast Wilderness Area to the east and, to the west, the rugged coast. The mountains are made of granite – some of New Zealand’s oldest rock – and signs of glaciation are clear on the landscape.

From Mt Kelvin, our route dropped down its western face and along Sanatorium Ridge. From a high point just below the mountain, we could see the Paparoa Range disappearing into the horizon. As far as the eye could see was a series of peaks, spires, and ridges surrounded by scrub. Most of our trip had involved traveling exclusively above the bush line. A traverse south from here would be difficult as the ridge dips below the scrub line in several places.

The full length of the Paparoas has been navigated at least twice. Kevin Dash and Trevor Johnston were the first and they wrote a book, Touching the Wilderness, about their experience. They used the Ohikanui River as a handrail to navigate around some of the most difficult terrain before climbing onto the tops at the head of the river and making a beeline across them. Their trip paved the way for others and left the challenge of a full traverse along the top of the range open for others to attempt.

After being awarded a youth scholarship from the Federated Mountain Clubs in 2014, Nicholas Riordan and Matt Hanson traversed the range the hard way – along the tops. They climbed the steep undulating ridge above the Buller River to gain Buckland Peaks and navigated through the most difficult section of the range before dropping down the Croesus Track – a traverse of some 70km. It would have been a test for any tramper and showed a great deal of tenacity. I was glad to be heading home through easier country.

We had good visibility at the start of the unmarked ridge and care needed to be taken to choose the correct route. We headed down the correct way and half an hour beyond the scrub line we picked up a lightly marked and cut track.

The route was uniquely marked with old car registrations nailed to trees. The waterproof white cards had stood the test of time and stood out well against the green background. We passed Mazda 1988, Toyota Corolla 1992, Suzuki 1978, and even a Lada.

To begin, travel was friendly through open stunted podocarp forest, but the lower ridge was covered in windfall and our progress slowed to a crawl. Cyclone Ita caused the devastation way back in April 2014. After wreaking havoc in northern Australia, the storm crossed the Tasman and made landfall here. The West Coast bore the full brunt, with winds of more than 130km/h in Westport. Wind speeds in these mountainous areas would have been much higher.

Progress along the ridge involved climbing over, under and through a tangled maze of fallen trees. In other areas of the Coast, huge areas of bush were destroyed by the storm and tramping tracks and routes became incredibly difficult to travel.

Beyond the windfall, at the bottom of the ridge, we picked up a track through boggy pakihi which led to a 4WD road that took us back to the car we had left as a shuttle.

As an experience, the Paparoa Range route between Buckland Peaks and Mt Kelvin is hard to beat. It traverses a terrific area of wilderness and gives a glimpse of what much of New Zealand’s backcountry must have been like before it was crisscrossed with huts and tracks.

While those amenities make backcountry journeys more accessible, these wild places allow space for natural processes to take place and for people to get truly away from civilisation.

Access
From Lower Buller Gorge Road. There is a sign on the northern side of the highway, shortly after the SH6/SH67 junction, which marks the side road

View more images from this trip: 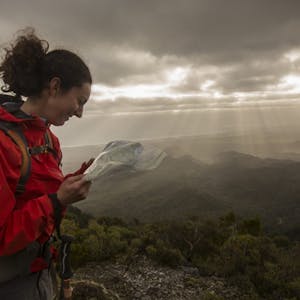 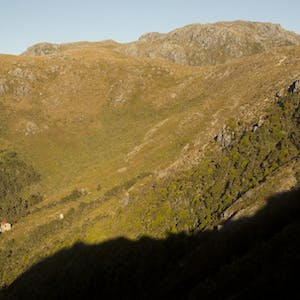 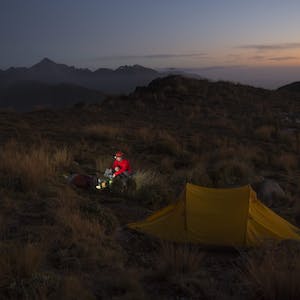 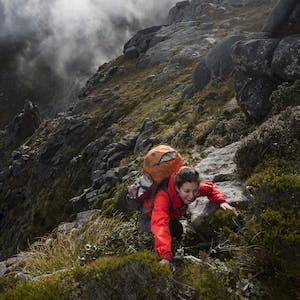 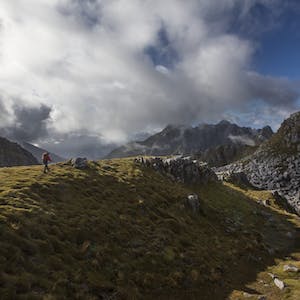 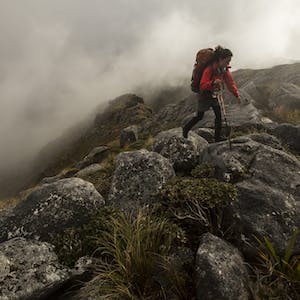 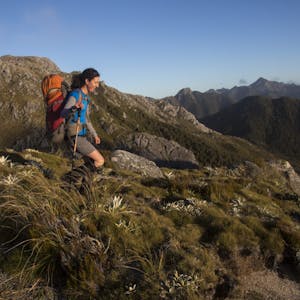 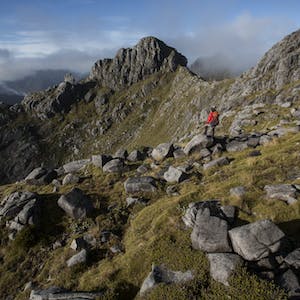