The wide, open plain that is Edwards Pass in the Clarence Valley of southern Marlborough stretched before us. Mike Latty and I had a loosely formed plan which involved trekking in past Samoa Mound and onto Tonga Hill – a 1600m outlier of the St James Range, to reach Mt Sadd, 1798m, on the range proper. 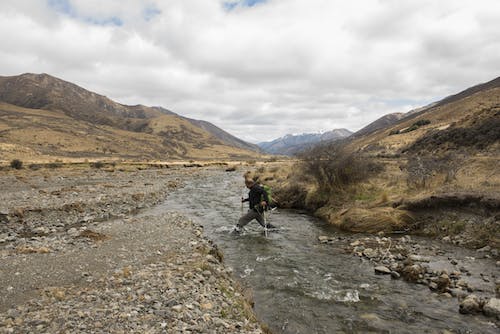 We chose this relatively remote and seldom-visited region mostly on account of the weather which was piling cloud cover onto the ranges to the west and sending the odd gust of wind into the valleys. We hoped to escape the inclement conditions due to the sheltering effect of the St James Range and pull off a summit attempt at the same time.

We had five-kilometres of desert-like terrain to cover before even reaching the base of Tonga Hill’s south-east ridge. Fortunately the walk in was along the start of the St James Cycleway mountain bike track, so the going was quick and we were soon fording the small but swift Edwards River to reach the base of the range.

From here on it was slog time – an 800m ascent spread over three-kilometres of rough and sometimes steep ground to reach the top of ‘the hill’, but this was not the hill we wanted to climb, it was only a waypoint as the real summit, Mt Sadd, lay some two-kilometres farther north along a ridge of indeterminate difficulty. As we climbed, we tried not to think of the names of the peaks here – not only the aforementioned Mt Sadd, but her nearby sister summit of Mt Horrible. It all seemed a little depressing, though the names are a good fit for the landscape, which is bleak, inhospitable, and barren. That of course is the nature of much of this portion of the region, bordering the southern end of Molesworth Station and taking a regular beating at the hands of the ubiquitous nor’wester, the result being a rather tired, even sad, landscape. For all that, it is still powerful and evokes feelings of insignificance amid the power and raw beauty of nature.

We closed in on Tonga Hill, chased by the wind. Flicking its wings over the open ridge crest, the nor’west gale gripped us as we ascended and passed over the summit to reach a rock outcrop at 1691m. In this tiny sanctuary we ate lunch and took stock of where we were and, most importantly, where we might be going.

The ridge ahead was unwelcoming: snowed-up, corniced in places, windswept, and altogether unappealing. Mike voiced the thoughts of us both: “There’s a lot going on along there, mate.”

Understated to be sure, but clear nevertheless. Not one to give up easily, I headed on by myself along the ridge to check out the difficulties and how we might negotiate them with the time we had. Mike waited in the shelter back at the rocks. I wasn’t gone long though, assessing that the remainder of the route wasn’t possible in the conditions.

We descended the broad south face of Tonga Hill, straight down the long scree slope. We crossed the Edwards and joined the track again, though rather than taking it all the way to the car park, we detoured to Edward’s Pass proper and to beneath Samoa Mound until reaching Horrible Stream, which we followed back to the car.