Matthew Pike speaks to the man brightening up the backcountry by helping to restore a valuable piece of tramping history.

Hotdogs on a stick are a bit of a culture shock to those visiting New Zealand; approximation of meat coated in grease-saturated batter, then dunked in ketchup. They look more like severed limbs than food. But Kiwis share a great affection for them, presumably based on happy childhood memories of school fairs and games of rugby.

Likewise, trampers and hunters share a similar affection with the old four and six bunk huts built by DOC’s predecessor – the New Zealand Forest Service (NZFS). These huts are as basic as you get – four walls and a roof, traditionally built with an open fire and painted ‘survival orange’ (not a dissimilar colour to those impaled hotdogs). They were purely functional, with no thought given to the likes of a view or open deck.

But to NZFS workers at the time, these little bunkhouses were home. Workers would typically spend six weeks there culling deer before a four-day break. Then it was back to the hut again. Sometimes they’d be there for 12 weeks at a time. “They were the best huts of the lot – the most comfortable and practical,” says Derrick Field, who worked for NZFS and DOC for 41 years, mostly  near Wellington in Tararua, Rimutaka and Aorangi forest parks.

“The huts were easy to keep clean and were warm and well designed with an open fire that was good for cooking on. Wood burners these days are limited for cooking, and if you’re living in a hut for six or 12 weeks at a time, you’ve got to have something decent to cook on.

“The orange hut was always a nice sight after a long day in the hills.”

The huts, built mainly in the 1960s, have mostly been destroyed, replaced or drastically modified, leaving a small percentage in a state where they can feasibly be restored.

Given the affinity NZFS workers had with these little huts, it’s not surprising that two dozen people put their names forward when DOC suggested a group take over their restoration. Thus, the group exNZFS was born with ex-Tararua deer culler John McCann at the Chair. But no members have been more involved than Derrick Field, who is leading several projects and running the group’s Facebook page. 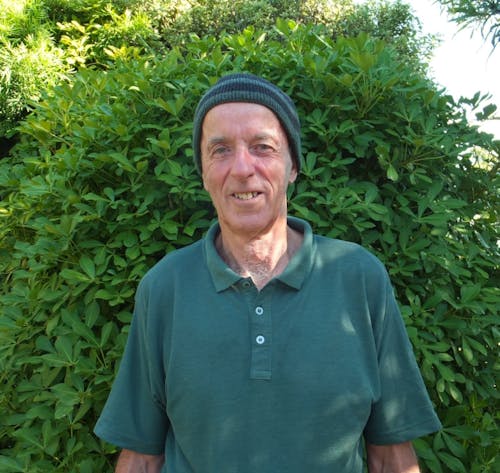 “We’ve taken on six huts and two bivvies,” says Field, who says much of the group’s work this summer is being spent restoring Arete Forks Hut in the northern Tararuas. “That’s the major project. It was getting a bit neglected and it’s suitable for totally restoring because it’s on a site with plenty of firewood – most of the other huts are at higher altitude in the open with little wood supply.” The group is currently applying for consent to restore an open fireplace in the hut.

“It’s also good to see Mid Waiohine Hut back in its original colour,” says Field. “In my opinion, it’s the best representative of the remaining huts. It’s the most authentic and its location is pretty cool, which made it a special place for deer cullers; out of the tops, in a nice sunny valley, with a nice river full of big trout.”

Local DOC staff and the Community Conservation Partnership Fund have helped the cause as has the fact that the group has the original hut plans, and two members who actually built huts for the Forest Service (one of whom built some of the original huts in the 1960s).

Although the group is keen for the huts to be comfortable for trampers, a real focus is placed on the history – restoring them as close to their original design as possible and featuring historical information; with stories of the huts and the people who stayed there.

Field says this information has gone down well: “The orange hut was an iconic thing and there was a time when that was all trampers saw on hillsides. The feedback we’re getting is trampers are keen to see them back in their original state.”

The group’s focus will be to continually improve the eight huts and bivvies under their wing, and the information that goes with them. But they’re also keen to see similar projects kick off in other parts of the country.

“If any ex-deer cullers are interested in taking up the challenge we would like to encourage that to happen,” says Field. “Hopefully there are still hundreds of NZFS huts left around the country – a lot of them have been modified quite a bit, so we think looking after the remainder is important.”

Huts and bivs being restored by exNZFS (as of March 2016)